Home » History » Oracle at Delphi: The Age of the Prophetess of Apollo
History

Oracle at Delphi: The Age of the Prophetess of Apollo

The Oracle at Delphi on Mount Parnassus, about 100 miles northeast of Athens, Greece, was a place of prophecy. Considered by the Greeks to be the very navel or center of the world, Delphi was the site of the temple of Apollo, which housed a high priestess called the oracle or the Pythia. Through an ecstatic, sometimes frenzied display, the prophetess invoked the god Apollo to divine the future. Although there were other oracles around the vast Greek world, Delphi was the most important. 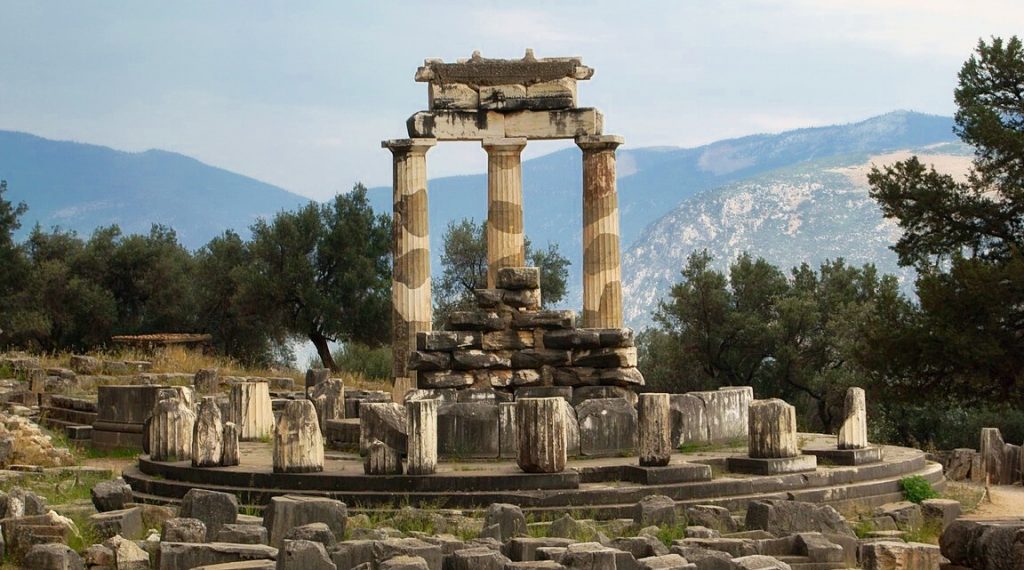 Between 1700 BCE-1400 BCE, Delphi, previously called Pytho, began as the seat of the worship of Gaia (Hoyle). As a primordial goddess, she was the Mother Earth who gave birth to the gods. Based on the Greek story, it was Gaia who first inhabited Delphi. Her son, Pytho, a mighty serpent or dragon, guarded the site. Gaia appointed the nymph Daphnis as her prophetess. Daphnis breathed in what the writer on ancient Greek myth and religion Robert Graves called “the fumes of prophecy.” Others say she inhaled methane, the odor of rot from a cadaver, or burning laurel leaves.

Later, Apollo killed Gaia and her son and became the indwelling god of the sanctuary at Delphi. From about 1200 BCE, the priestess channeled Apollo for all prophecies. A large temple of Apollo was erected in the 7th century BCE and became the most important structure at the acropolis in Delphi. It burned down in 548 BCE, and subsequently, a new temple was built in its place. 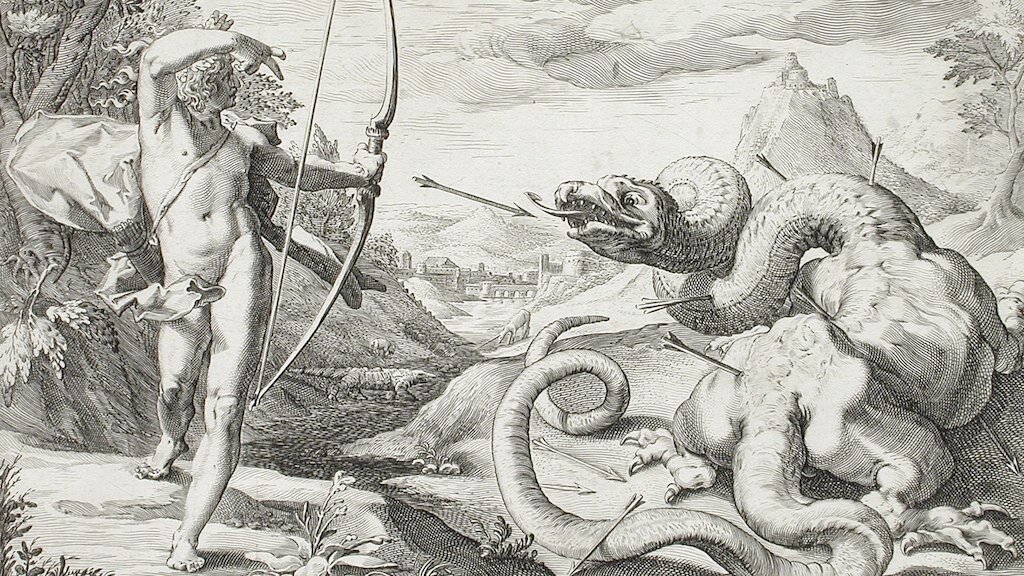 The prestige and power of the Oracle at Delphi peaked between the 6th century BCE and the 4th century BCE. People from across Asia and the Mediterranean traveled many miles to visit the Pythia for her prophecies. Early on, there was one priestess who divined the future only one day per year on the birthday of Apollo. Later, as the oracle’s popularity spread, two or three priestesses shared the job by rotating across most days for nine months out of the year.

During the winter, as the Greeks believed, Apollo left Delphi to spend the season in the warm mythical Land of the Hyperboreans. Without their god of light and prophecy, the seers at Delphi did not divine the future until Apollo returned in the spring.

The Ancient Greek Story of Narcissus

Although anyone could see the Pythia at Delphi for a price — usually an animal sacrifice or valuable votive offering — wealthy people and heads of state paid the oracle well to hear prophecies about essential matters, such as military campaigns or a location to found a new colony.

Importance of Delphi and Oracles

At Delphi, the Greeks considered themselves to be at the crossroads of the world as a whole. Long before Apollo came along, the beloved and all-powerful Zeus, the Father God of the ancient Greeks, released two eagles from the edge of the world to find the center. After flying for a long time, the two eagles met at Delphi. The Greeks dedicated the place with an omphalos, which means navel, in the form of a big rock carved in decorative motifs.

An entire settlement developed around the sacred site at Delphi. Besides the temple of Apollo, there was a sanctuary of Athena, a theater, an athletic arena, cemeteries, treasuries that held the rich spoils of wars and votives, and the Sacred Way, a path that connected it all. However, by far, it was the Oracle at Delphi that made the site famous. (History).

There were many other, less significant, Greek oracles around the world. To cite just a few, for example, in western Turkey, Didymabecame the second most prominent oracle to the Greek world, primarily around the Mediterranean. Many high officials, emperors, and even Alexander the Great visited the Didymaean prophetess. According to legend, it was here that Hercules supposedly built the altar, and Branchus, the son of Apollo, built the temple. At the very ancient acropolis of Argosin Greece, the oracle tasted the blood of a lamb before issuing her prophecies. The Greek settlement of Cumae on the Italian peninsula housed the famous seer, the Cumaean Sibyl, who flew into wild ecstatic fits to utter the words of Apollo.

What Happened During Prophecies?

Sacrifices were offered by the supplicants, adorned with laurel crowns and fillets of wool. Having prepared herself by washing and purification, the Pythia entered the sanctuary, with gold ornaments in her hair, and flowing robes upon her; she drank of the water of the fountain Cassotis, which flowed into the shrine, tasted the fruit of the old bay tree standing in the chamber, and took her seat.

The seer had to conduct certain rituals to prepare herself for Apollo to possess her. She washed up and put on special clothing. When she was ready, she proceeded to her seat, a gilded wooden tripod in a special room, called the adyton. At that point, she induced her own trance. According to various sources, she may have used special narcotic botanicals, such as oleander, intoxicating spring water, or gases that rose from fissures in the ground. These likely served as mind-altering substances. Once fully immersed in a state of ecstasy, the priestess began channeling Apollo’s voice. 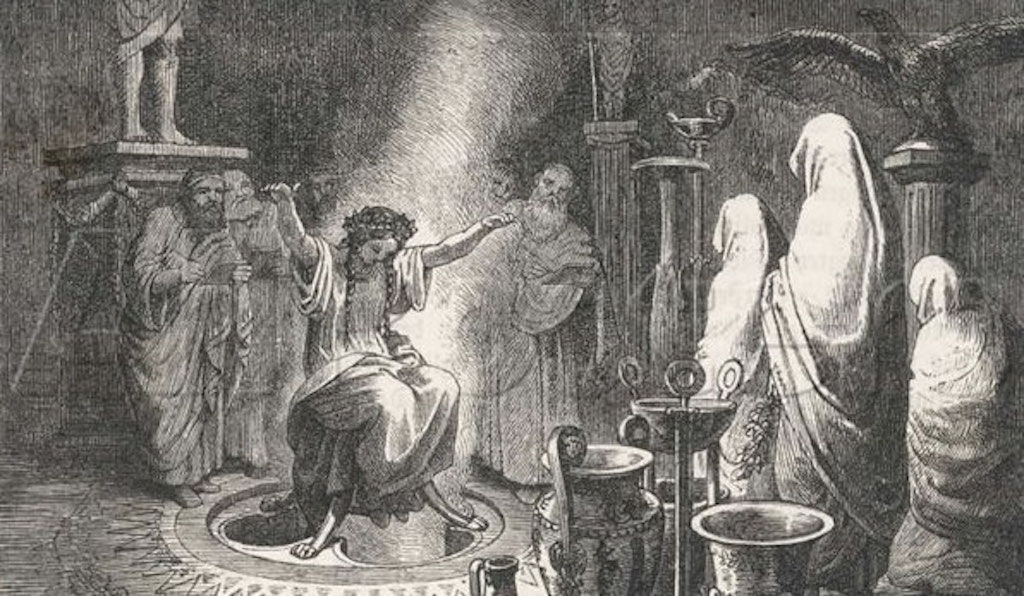 The Oracle at Delphi entered a trance that resulted in delirium or frenzy during prophecies. Public Domain.

“The responses were often obscure and enigmatical, and couched in ambiguous and metaphorical expressions, which themselves needed an explanation,” wrote Oskar Seyffert in A Dictionary of Classical Antiquities, Mythology, Religion, Literature & Art. Often a priest stood by who would interpret the garbled words of the priestess and write them down in the form of poetry, called dactylic hexameters, on leaves or other objects.

What Was the Source of the Oracle’s Trance?

The priestess sits on her tripod directly over fumes. Public Domain.

Research indicates that the temple of Apollo at Delphi sat over a point where two fissures in the earth cross each other. Analyses of the ground and rocks at the oracle indicate the presence of ethylene, a sweet-smelling gas, ethane, and methane. These gases flowed to the surface at this spot and would have resulted in delirium and ecstasy. (Spiller et al.).

Plutarch (c. 46 CE-120 CE), the Greek-Roman biographer, served as a priest at Delphi for 30 years before his death. He reported that the oracle usually seemed as though she had run a race or danced an ecstatic dance. According to him, less often, she flung herself around and raved in a delirious state. Additionally, he witnessed a sweet smell sometimes emanating from the oracular chamber, and believed that it came from geological processes in the ground. (Spiller et al.).

Although the seer was often incoherent due to various intoxicants, some say the prophecies she uttered were deliberately ambiguous. Lack of clarity and detail helped to preserve the authority of the oracle; it might be better to be vague than to be outright wrong. It was a strategy that kept the Oracle at Delphi in high esteem for many years.

Famous Prophecies of the Oracle at Delphi

The oracle delivered many remarkable prophecies and instructions. Here are a few:

“Love of money and nothing else will ruin Sparta.”

Croesus, king of the Lydians, held a special test for the oracles of Greece around 560 BCE, including Pythia at Delphi. When he asked her to tell him what he was doing on a particular day, the Delphic Oracle replied:

“I count the grains of sand on the beach and measure the sea; I understand the speech of the dumb and hear the voiceless. The smell has come to my sense of a hard-shelled tortoise boiling and bubbling with a lamb’s flesh in a bronze pot: the cauldron underneath it is of bronze, and bronze is the lid.”

The judges named the Delphic Oracle the winner of the contest of oracles. Croesus then asked the seer if he should attack Persia. The reply at Delphi was that a great empire would fall if Croesus did attack. Croesus took that and other prophecies as an affirmation that he should strike, but it was his own empire that fell.

“Now your statues are standing and pouring sweat. They shiver with dread. The black blood drips from the highest rooftops. They have seen the necessity of evil. Get out, get out of my sanctum and drown your spirits in woe.”

And she prophesied doom for Sparta:

“The strength of bulls or lions cannot stop the foe. No, he will not leave off, I say, until he tears the city or the king limb from limb.”

At Thermopylae, the 300 Spartans and allies held the pass and repelled the Persians there; later, the Persians killed off the Spartan army. Zeus told the Athenians that a wall of wood would hold against the Persians, so the Athenians made a wall of wooden ships around their city and held their own in three naval battles. The Persians did burn Athens, but the residents had evacuated, and Greece stayed the day. The oracle’s reputation was never more considerable after this.

The End of Apollo

Thanks to the Oracle at Delphi, the sanctuary site became steeped in power, fame, and wealth. Although it had become an independent Greek entity, everyone wanted a piece for themselves. Thus, from the 5th century BCE until the 1st century BCE, various groups battled for control of the site. Finally, in 191 BCE, the Romans took Delphi and held it for nearly 600 years. However, in 392 CE, Roman Emperor Theodosius banned all pagan worship across the empire, and the Romans shut down and destroyed the sanctuary. In her final words as the Delphic Oracle, the Pythia uttered, “All is ended.”

Lake Avernus Mythology, Oracles, and Gods of the Underworld