The standard definition of a dodecahedron is a geometrical object with twelve faces. In contrast, a Roman dodecahedron is a smallish object, usually bronze and between 4 centimeters to 11 centimeters in size, with twelve equally-sized faces and holes in the middle of each side that surrounds a hollow middle. Approximately 100 of these mysterious objects have been found throughout Europe in Wales, Italy, Germany, France, and other countries. Tests show them as dating between 100 to 200 CE. 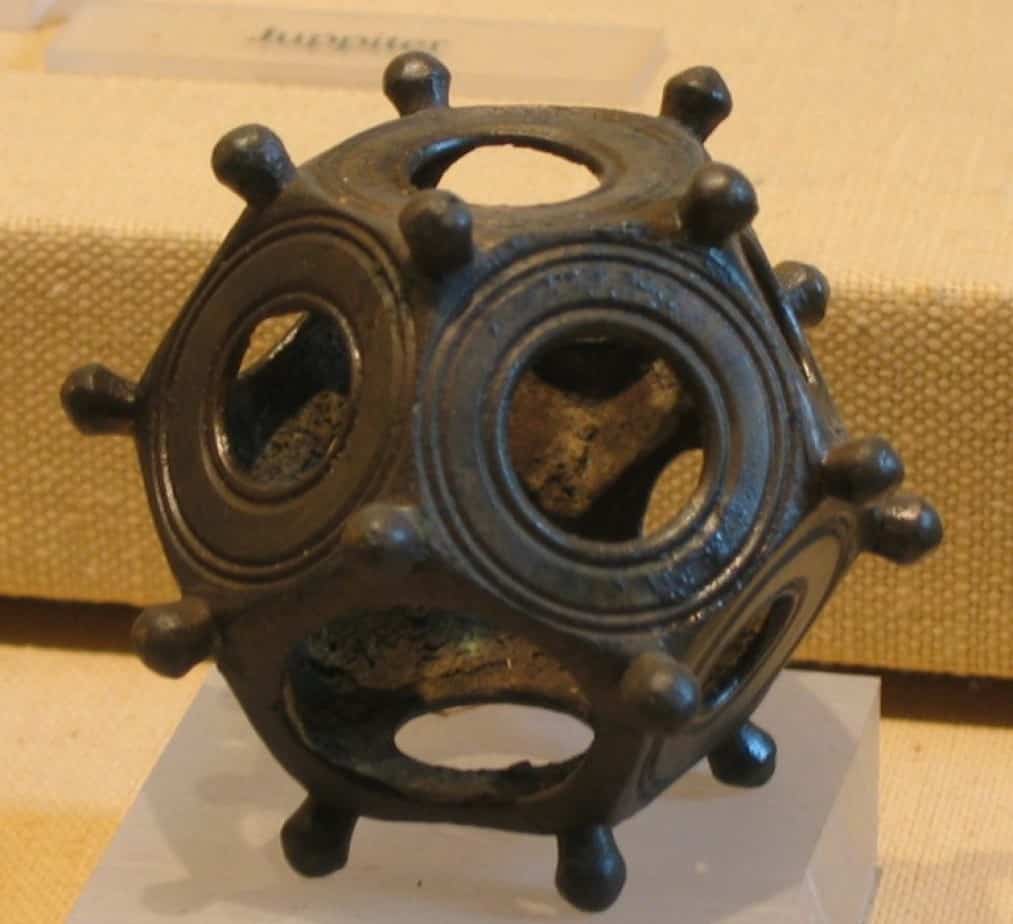 This Roman dodecahedron found in Germany is on display in Saalburg castle near Bad Homburg.

Despite the number of them and the fact that they have been found in places known to be populated by the ancient Romans, nobody knows what they are or what purpose they served. The Romans were famous for writing documents detailing everything from the beliefs about their gods to the eating utensils and other minutiae of everyday life. But no existing document even mentions these puzzling twelve-sided objects. Nor do any of the existing pictures and paintings made from the relevant times include even one of these objects.

One possible clue is the presence of candle wax found in the interior of one of the dodecahedrons. This leads some scholars to theorize that the objects served as candle holders for illumination, perhaps in religious or sacred rituals.

The number of sides may be significant and may represent the 12 signs of the Zodiac and therefore may have indicated supernatural or astronomical uses. According to one theorist, each side represents a month of the year and could determine the optimal planting and harvesting dates by the angle of the sunlight striking the object.

On the other hand, the notoriously famous Roman builders could have used them for scientific purposes such as water gauges or for some kind of architectural aid.

As with the candle theory, some of the Roman dodecahedrons were found in or near stockpiles of coins. This led researchers to believe that whatever their purpose, the objects were considered valuable within Roman society.

Other less technical explanations include the objects were used as dice or as some other kind of entertainment devices such as a child’s toy. The dodecahedron could easily be carried by Roman soldiers on military campaigns to be used as some sort of pastime during times when direct combat was not taking place.

While most researchers believe the objects to be of Roman origin, it is not out of the question that they originated as a religious object in a society conquered by the Romans and the invading Roman army took the objects and used them for similar religious purposes in their own form of worship.

Other theorists have put forward an educated guess that the artifacts were used in warfare as projectiles or in some way holding together weapons of war. On a more domestic note, one researcher puts forward the theory that the objects were used as an aid to knitting fabric. If this is true, this might explain why something so domestic and unimportant was never mentioned in the formal Roman writings.

And it cannot be ruled out that the objects, like modern-day duct tape and clothespins, were used for more than one purpose.

Judging by the sheer number of Roman dodecahedrons found, there are most likely many more out there waiting to be discovered. Hopefully, as more of them are dug up, there will be more clues as to what the purpose of the objects were in ancient Roman times.

The Disappearance of Ambrose Bierce