It was actually by “accident” that Kihachiro Aratake made the discovery of what scientists’ are calling, “the archeological find of the century.” He came across the mysterious find while diving off the coast of Yonaguni Jima, an island located 67 miles from Taiwan, in search of a new spot to view hammerhead sharks from. However, he inadvertently strayed outside of the designated safety zone and was taken by surprise when he saw what appeared to be a massive stone structure sitting on the bottom of the ocean floor. He swam closer to investigate his discovery and was in awe at how colossal it was. The structure was approximately 240 feet long and 90 feet wide, with an arranged pattern of monolithic blocks, black and gaunt. Due to the heavy encrustation of coral, it was difficult to determine exactly what it was. Curious, he encircled it, again and again, taking photographs before returning to shore. 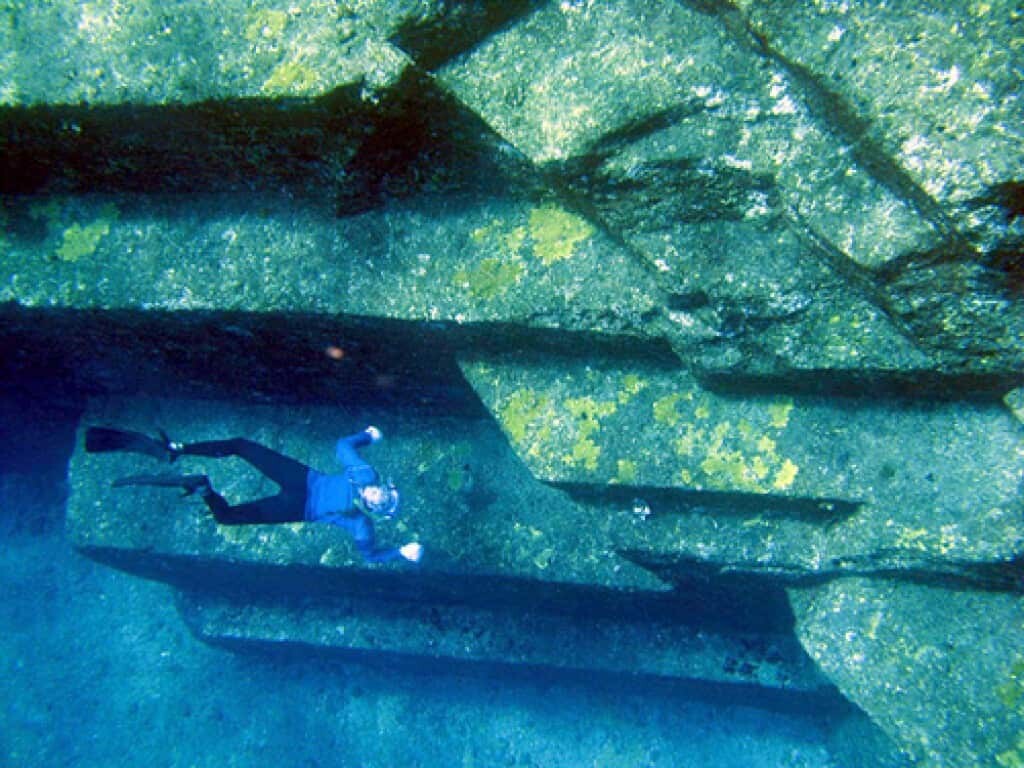 The next morning, he awoke to find his pictures plastered on the front page of every major newspaper in Japan. News of his discovery traveled quickly, and instantly attracted diving archeologists, news media people, and curious non professionals to the dive site. Controversy grew at the same quick pace as researchers and scholars debated over its origin. Were these structures man-made or simply formations caused by natural elements?

Since then, Professor Masaaki Kimura has made more than 100 dives and has extensively mapped out the area. He believes he has stumbled across the remains of a 5,000 year old city beneath the ocean. A total of ten structures were discovered at Yonaguni, and another five off the main island of Okinawa. Combined, the ruins cover an area measuring 984 feet by 492 feet.

Among the Yonaguni Jima ruins Professor Masaaki discovered – a stepped, stone structure measuring 82 feet high that dates back to 8,000 B.C. and closely resembles a stepped pyramid. It is also referred to as “the world’s oldest building.” It’s design has been compared to various pyramids found in the America’s and could prove to be one of the most important archeological discovery of the last fifty years. 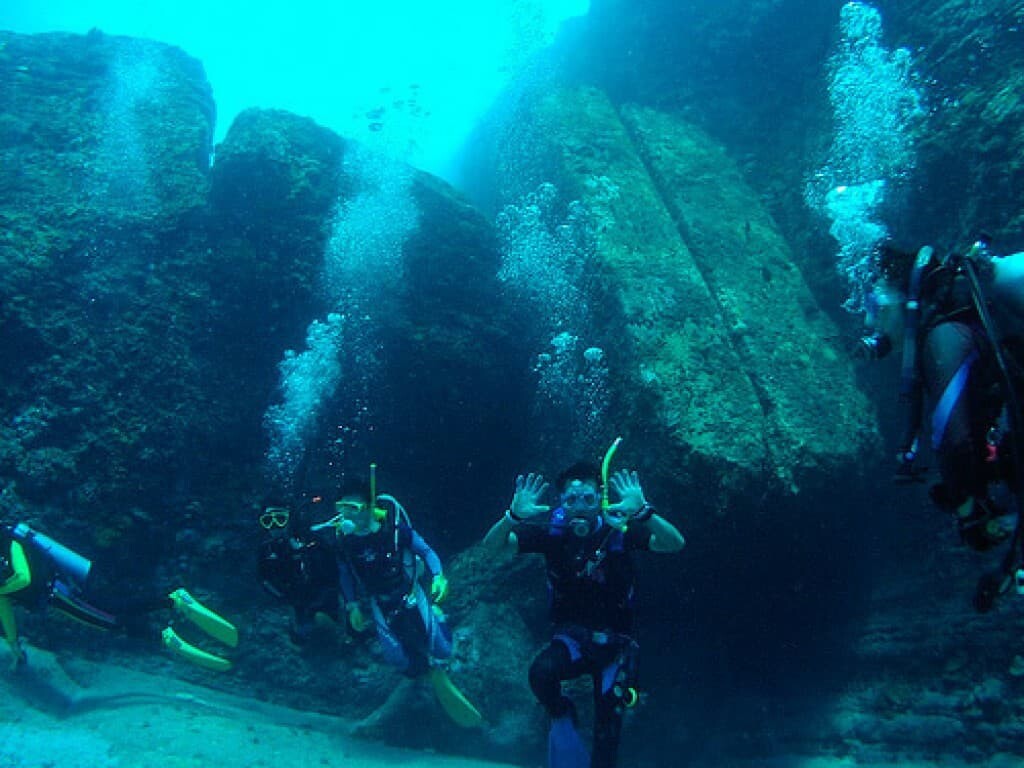 Adding to his awe was the discovery of another structure – a sphinx – that resembles a Chinese or Okinawan king. Ruins of an ancient castle, a triumphal arch, five temples, and at least one large stadium, complete with connected roads and water channels, and surrounded by huge retaining walls make up this city beneath the sea.

Obviously skilled and far more intelligent than we could ever imagine, more evidence found of their advanced designs include a massive arch or gateway made of huge stone blocks patterned to fit together in the same engineered technique as those of prehistoric relics found among the Inca cities in the Andes Mountains of South America. Thanks to strong underwater currents, the structure has been well preserved, allowing 100% visibility of the in crystal clear waters. It was clearly evident by its architecture and design that the structures were made by man.

For many decades researchers and scientists have explored the possibility that Plato’s fabled story about the lost continent of Atlantis may actually be true and might have been located in the Mediterranean Sea or the Atlantic Ocean. The same holds true for her presumed sister continent, known as Mu or Lemuria, in either the Indian or Pacific Ocean. Now these ancient ruins found submerged beneath the sea near Okinawa is considered by many as “tangible evidence” of a lost, highly sophisticated, ancient civilization dating back 10,000 years! Could this be Mu or Lemuria? 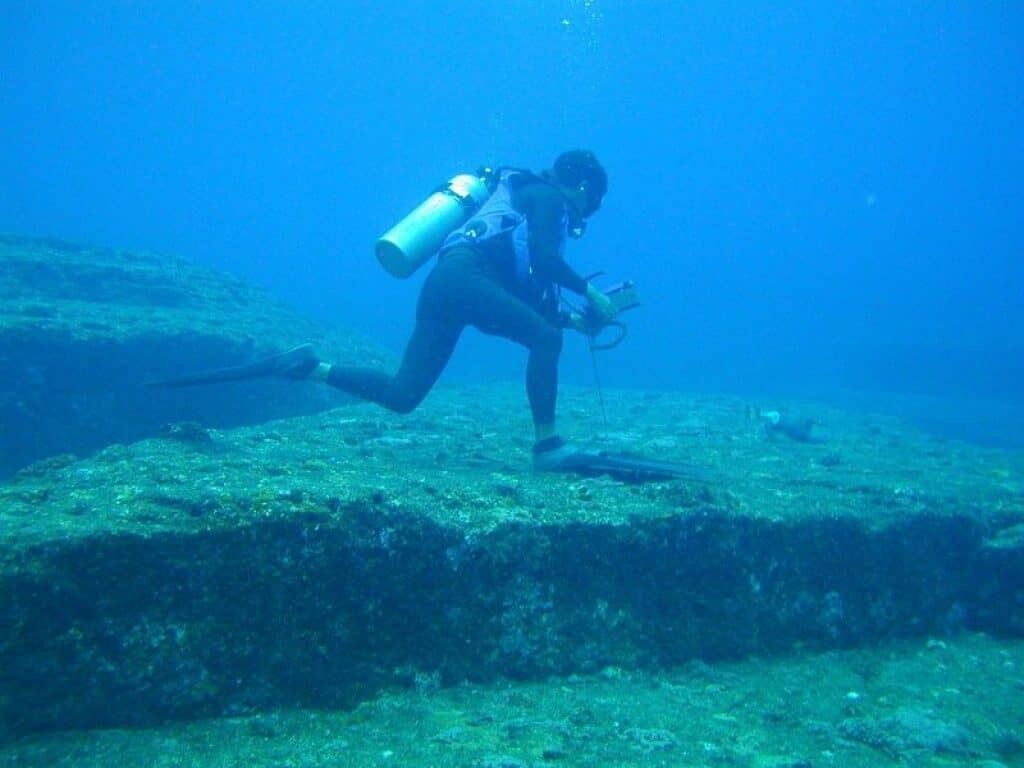 To date, it is estimated that we have explored only 3 to 5 percent of the ocean floor. With so much territory still left to explore, we can only imagine the discoveries yet to come! According to Robert Ballard, a professor of oceanography at the University of Rhode Island, “We have better maps of Mars than of our own planet.”

As we continue to dive deeper into the vast blue sea, we will undoubtedly uncover more relics of a time lost and perhaps forgotten…until now. It is said, “in order for us to move forward, we must first know where we came from.”

New information on the Yonaguni Monuments are constantly being found.  Please share your comments and/or pictures regarding this incredible discovery!

The Great Flood of China: Bringing a Legend...

Who Was Mary Magdalene According to The Gospel...