For roughly fifteen years or longer, a strange creature has been sighted in various parts of the world. This creature sucks the blood from livestock, particularly goats, if the stories are to be believed. The beast only appears at night and seems to vanish after it attacks. The only evidence it leaves behind is dead animals, all with two puncture wounds like those said to be made by vampires. It is known as Chupacabra or “goatsucker.” As far as cryptids go, it is young, but its infamy has spread far and wide, both as something to fear and as something to scoff at. 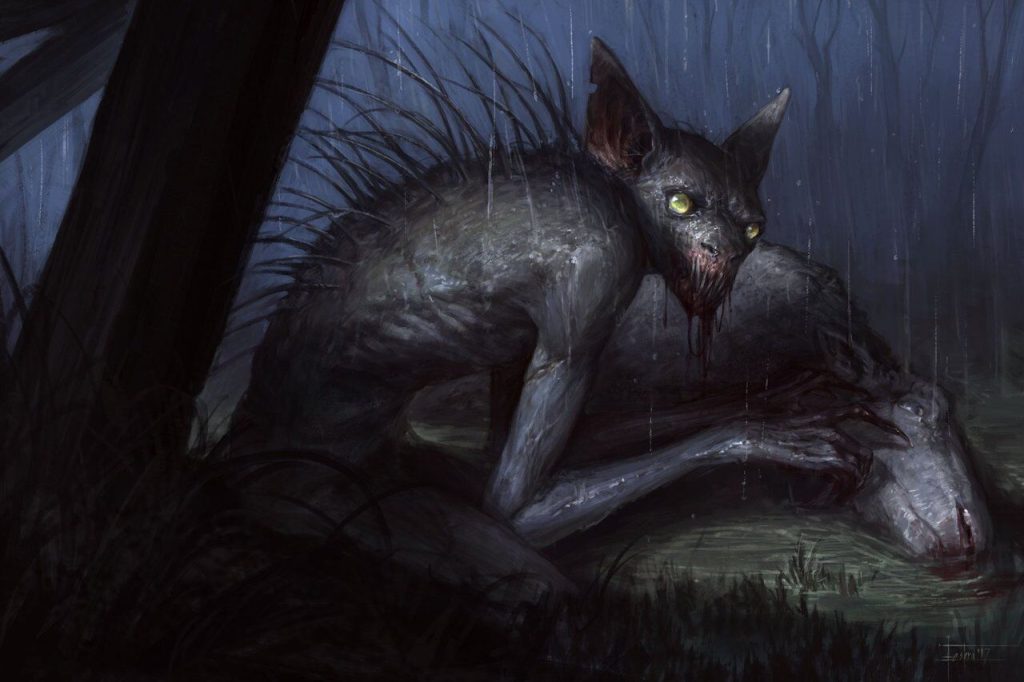 Chupacabra by 000Fesbra000 on DeviantArt.

Chupacabra may have first appeared in Puerto Rico in the 1990s. However, some sources say sightings go back much further. People simply had different names for the creature. Since the sightings in Puerto Rico, Chupacabra has been seen in Mexico, numerous South American countries, the United States and supposedly even Russia. How a creature could spread around the globe so fast without being captured or identified is anyone’s guess. Perhaps it is because descriptions of Chupacabra are so contradictory and far-fetched that people are mistaking known creatures for this cryptid.

The Chupacabra’s appearance is a much debated and widely contradictory subject. Here we will discuss some of the creature’s supposed attributes. It is hard to come up with a clear picture of what the creature is supposed to look like from this information, but you can decide which Chupacabra you think is the most realistic, if any.

Chupacabra is said to have gray skin, like that of an alien a la Roswell photos. It is also said to have green skin like that of a frog. Its skin may be leathery and reptilian, furry and reptilian or feathered and reptilian. Descriptions have covered all three. Other interesting skin characteristics the Chupacabra may have is webbed toes, fingers, arms and legs. It may also have “feathery spines” running down its back to it hindquarters. It is sometimes said that Chupacabra has a tail and that the spines follow the creature’s tail to the tip. It has been described as winged as well.

The size is another mystery. It has been said that the creature is about the size of a large rodent with wings, but it is too large to be a bat. It has also been said that Chupacabra stands between 4 1/2 and 5 1/2 feet tall. The gait of the creature is up for debate as well. When it is not described as a rodent, it is described as walking on its hind legs, but being capable of running on all four. Other sources say that it moves like a kangaroo. It may also be able to move in and out of this “realm” without notice.

The face of Chupacabra may be dog like, rodent-like, alien-like or demon-like. The alien Chupacabra is rather popular. It has vertically oval red glowing eyes and a vertically oval-shaped head-like the grays of Roswell fame. One more notable feature is its scent. Some say that Chupacabra reeks of sulfur.

Its varying descriptions would give any skeptic pause. There are so many variations that the idea it is the same creature is difficult to swallow, so to speak. The sulfur scent that some witnesses describe has obvious religious connotations. It is said that the Devil and demons smell of sulfur. People who are on the brink of being demonically possessed supposedly report the smell of sulfur. It makes one wonder if superstition is not playing a huge role in the spread of Chupacabra throughout Latin America.

On the other hand, many people believe the Chupacabra is very real. They fear the creature, despite authorities’ assurances that all the attacks attributed to this cryptid are actually wild animal attacks. All photographic and biological evidence of the creature has been proven hoaxes. That, in and of itself, says a lot, but does not prove that Chupacabra is not very real and sucking the life out of livestock around the world.