Francesco Forgione, more popularly known as Padre Pio, was born on 25 May 1887 in Pietrelcina, Italy and would one day capture the attention of the Christian world as the priest with stigmata.

As a young child, he already felt a closeness to God.  He would sleep on a stone floor and use a stone pillow as one of the many forms of penances on himself.  His mother claimed that he was able to communicate with Jesus, the Virgin Mary, and his guardian angel.  He would also experience occasional heavenly visions that would lead him to a sense of ecstasy.  To Francesco, this was absolutely normal and he believed all people did the same thing.

He was never in good health, always succumbing to one illness or another.  Those close to him reported strange sounds coming from his room at night…described as screams and roars.  When Francesco prayed, he seemed to be in a trance-like state and oblivious to his surroundings.

The First Stigmata of Father Pio

Francesco Forgione is better known as Padre Pio. The stigmata is visible on his hands.

By 1910, Francesco became ordained a priest and became known to the world as Padre (Father) Pio.  It was around this time that he began to experience his first stigmata.  He later wrote: The stigmata can be seen on the right hand.

He always felt that suffering was the way for the soul to reach God.  But he felt humiliated by the visible wounds that the stigmata caused.  He would often pray that he welcomed the pain, but for the “unbearable humiliation” of the visible wounds to go away.  This reflects why he would routinely be seen wearing mittens to avoid his wounds from being displayed.

His stigmata would come and go, but on 20 September 1918, the stigmata returned and remained for the last 50 years of his life.

Controversy over the Stigmata

The stigmata became the center of discussion between believers and critics alike.  He was seen by many physicians, but none could diagnose the cause.  Word began to spread that he was seen taking Eucharist for 20 days without any other food as nourishment.  His stigmata wounds were characterized as emitting a fragrance and that Padre Pio had the unique ability to read a person’s soul.  As his fame increased, so did the scrutinizers.

He was accused of insanity, having sexual relations with women, misuse of funds and claims that his stigmata was self-induced with carbolic acid…only to obtain fame.  Even the Holy See claimed the events occurring in his life were not of divine origin.

The Vatican began to shun Pio, but his following continued to grow.  It wasn’t until after 1934 that the Vatican decided to take a second look at Padre Pio as perhaps having special qualities of a divine nature.

Saint Januarius and His Liquidating Blood

In 1947, Gemma de Giorgi was escorted by her grandmother to see Padre Pio. Gemma was born without pupils. The grandmother begged the Father to have God restore her eyesight.  Pio informed her “The child must not weep and neither must you for the child sees and you know she sees.”  Doctors were unable to identify how Gemma gained her vision.

In 1962, the now Bishop Wojtyla asked Padre Pio to pray for his friend, Dr. Wanda Poltawska, who was thought to be suffering from cancer.  Soon after, Poltawska’s cancer regressed, leaving the doctor’s baffled.

As the 1960′s were drawing to an end, Pio’s health began to deteriorate.  On September 23, 1968, he died.  Interestingly, just prior to his death, he kept repeating “Gesu, Maria” (Jesus, Mary).  He claimed he could see two mothers (believed to be his mother and Mary).  Finally, at 2:30 AM, his last breath was used whispering “Maria!”

He is credited for conducting miracles long after his death.  In October 1996, Consiglia De Martino was diagnosed with a rare illness causing her neck to become swollen.  A large orange-sized welt was also visible on her collarbone.  After consulting with her doctors, it was determined that her left lymphatic duct was fractured and leaking fluids into her body.  The doctors ordered surgery to be scheduled for 2 November to repair the damage or she would die.

Following the diagnosis, Consiglia prayed to Padre Pio – whom she always felt a kinship to.  She stated she felt his strong presence along with the smell of perfume.  She recalled that when she fell asleep she dreamed he put his stigmatized hands on her while stating “Don’t worry, I’ll operate on you”.  The following morning, she awoke cured.  Doctors immediately conducted tests only to be baffled at the miraculous change in her condition.  It was as if she was never ill.

After an intensive investigation conducted by the Vatican, it was deemed a miracle.  And it was this event that triggered the now Pope John Paul II to authorize the beautification of Pio. On 16 June 2002, Pope John Paul II declared him a saint.  Over 300,000 people attended the ceremony. 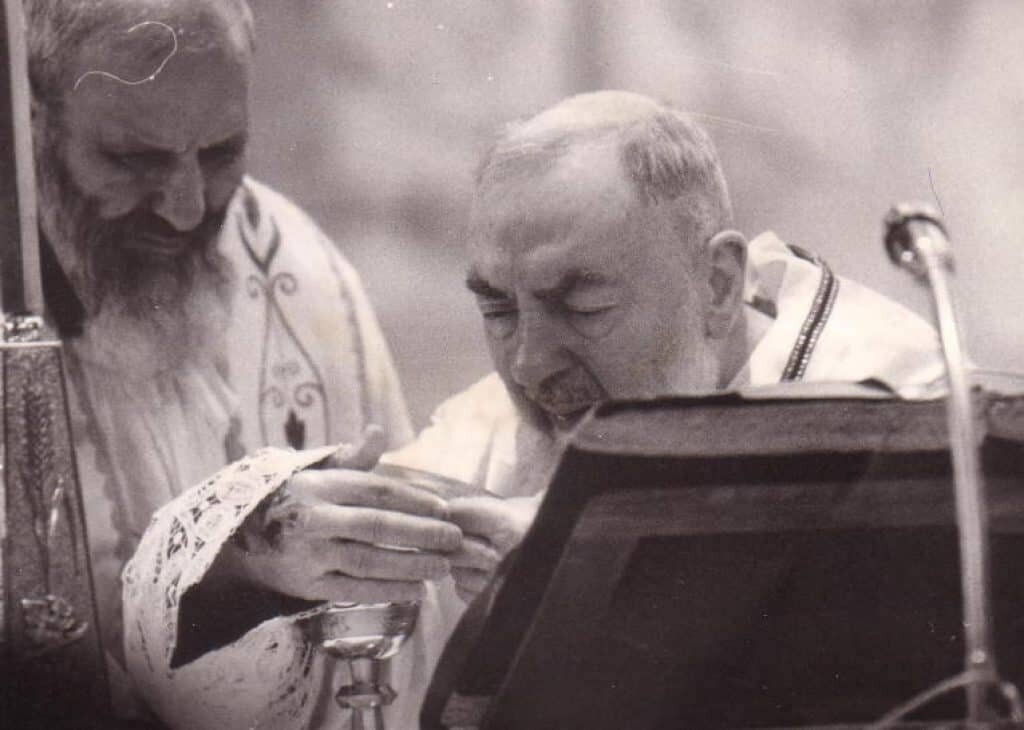 Critics continue to claim he was a fraud.  However, multiple examinations by doctors failed to identify a cause of the stigmata.  If it was self-induced, could he truly continue the deception for 50 years without the truth eventually coming out?  And what of the unexplained healings that are seen as miracles attributed to him.  Was it divine intervention through Padre Pio or just the strength of one’s faith?  Through all the controversies and mysteries surrounding this priest, he continues to be one of the most popular saints of Catholicism.