In just under a decade, Jamaican Nesta Robert Marley achieved international acclaim and recognition, putting Reggae music firmly on the map almost single-handedly. His music was a revolutionary outcry of the many injustices that were taking place, not only in Jamaica but in all of the world. Although Marley’s was a message of love and peace, his political voice was not received well by many in power. In 1976 an assassination attempt was made on Marley’s life. He survived only to succumb to cancer on May 11, 1981. Oddly, that cancer started in his toe sometime before 1977. Those who were close to Marley claim that there were strange and possibly related events preceding the toe cancer. Is it just a conspiracy theory? Here is the story of the suspicious death of Bob Marley. 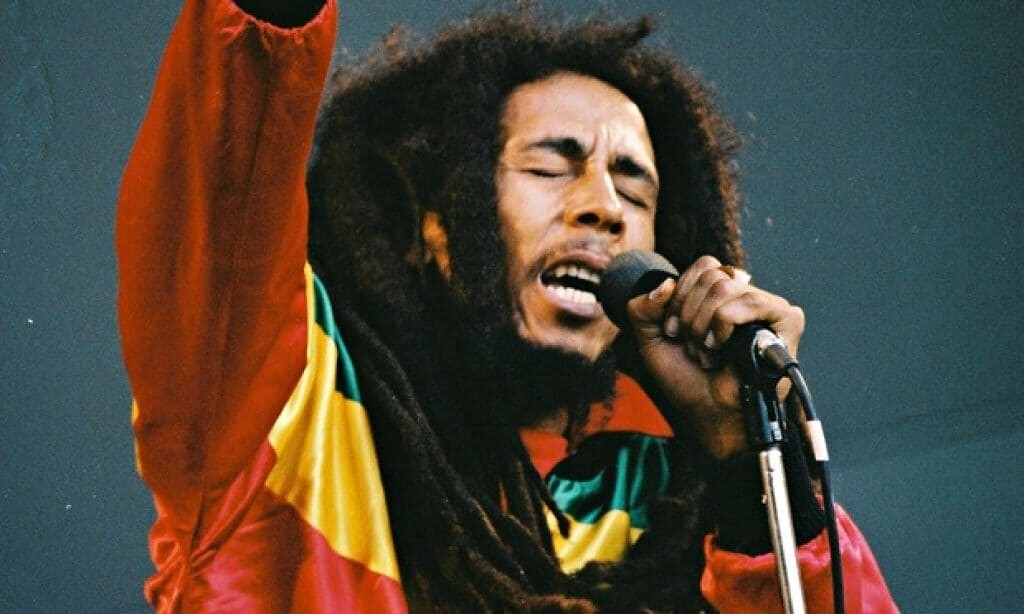 The suspicious death Bob Marley has caused many people to question how he really died. Wikimedia Commons, B. Javhlanbayr.

Reversing his given Christian names, the Reggae legend began to embrace the Rastafari religion during the 1960s. At first, this did go against his Catholic upbringing and his own mother’s beliefs. When the young Marley finally converted to Rastafari, he began to grow dreadlocks in accordance with the Rastafari belief that biblical Nazirites – such as Samson – were encouraged to make certain vows which included the ritual treatment of hair.

As the 1970s progressed, Marley’s music began to take on a life of its own, being much more politically suggestive. It was a fact of life on the island he called home. There was little, if any, censorship at that time, and destabilizing politics had an unsavory effect on island life. Cheap weapons and drugs turned this island paradise into something completely different. Right-wing propaganda did little to ease tensions and Marley saw this as an opportunity to highlight the conditions. His fans more than likely saw him as something of a revolutionary than a simple musician.

During this turbulent time, Governor-General Florizel Glasspole instigated martial law across Jamaica in an attempt to prevent potential pre-election violence. The People’s National Party invited the Wailers to play at the Smile Jamaica concert at the end of the year. Marley agreed to do so.

On December 3, 1976, just two days before the concert was due to take place, Marley was at home in his kitchen when the quiet was disrupted by noises that were later described as firecrackers. Don Taylor, Marley’s manager had been talking to the superstar when the automatic gunfire began. Taylor took the brunt of the assault but was not the only person wounded. A bullet hit Rita Marley while she was trying to protect her children. The bullet lodged between her scalp and skull, knocking her off her feet. A reporter from the Jamaica News was also present at the time. Another gunman managed to penetrate into the kitchen where Marley and Taylor were. These gunmen fired off eight shots in total but only hit Marley himself once in the arm.

Many people believed that the hit squad was affiliated with the CIA and that the attack was orchestrated by the organization. Neville Garrick, an art director for the Jamaican Daily News, reportedly had film of several suspicious-looking characters lurking close to Marley’s home. According to witnesses, Marley actually commented about how those men made him nervous. On the day of the assassination attempt, Garrick took some publicity shots of Marley. Marley let Garrick know that it looked to him as though they were scouting the property. Shadows on these individuals in the photos did obscure their features, perhaps by design.

On December 5, two days after the assassination attempt, Marley played at the Smile Jamaica festival in Kingston. Before the festival, only several of Marley’s most trusted entourage knew where and when the Wailers would be staying. Reports suggest that someone who claimed to be a member of a film crew hired to document the festival somehow managed to get past the heightened security without any form of equipment on his person.

Newspaper article about Bob Marley in The Gleaner, December 11, 1976.

While the band prepared for the festival performance, a gift was delivered backstage addressed to Marley. It was from Carl Colby, son of the CIA Director, William Colby.

Inside was a pair of cowboy boots. When Marley tried them on, something sharp inside one of the boots pricked his toe. He discovered a length of copper wire embedded deep inside the boot. Many people believe that sharp wire contained a radioactive substance because it was that exact toe that subsequently developed cancer.

Someone gave Bob a pair of boots. He put his foot in and said ‘Ow!’ A friend got in there – you know how Jamaicans are. He said, ‘let’s get in here’ – in the boot, and he pulled a piece of copper wire out. It was embedded in the boot.

At the Smile Jamaica festival, Marley openly defied this attempt on his life by performing a song supposedly directly aimed at the CIA. “War” turned into a 60-minute set, and after his assassination attempt, Marley meant every word of his performance. At the end of his set, he unbuttoned his shirt to reveal his bandaged wounds. 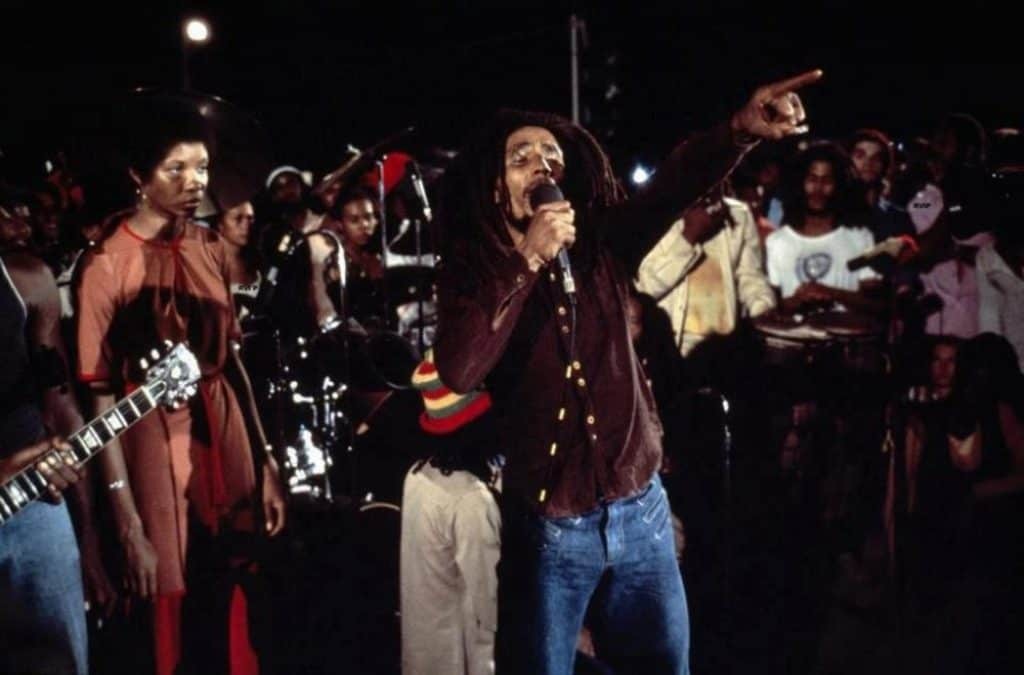 Once the Smile Jamaica festival had taken place, Garrick brought the prints to Nassau where the Wailers were due to fly to London. Before departing, it was discovered that the film had been stolen.

In 1992, Don Taylor published his memoirs. He strongly suggested that around the time of the Smile Jamaica festival, a high-ranking CIA agent became inserted in Marley’s inner circle as a means to an end in the assassination of Bob Marley. Taylor went on to suggest that the CIA themselves circulated the rumor that Bob Marley was going to be assassinated. CIA agents apparently warned Marley that he would be murdered if he returned to Jamaica from a world tour before the 1976 elections.

If that was indeed the case, then it is quite a damning statement to make. Although it may sound a bit farfetched, it was no secret that the CIA had been developing and utilizing toxins and delivery technologies to assassinate people. In 1975, the director of the CIA, William Colby testified at a Senate Select Committee hearing held to investigate the discovery of the unauthorized storage of large amounts of toxic agents design to kill.

The amount in question was enough to kill hundreds of thousands of people if administered using the equipment, such as dart guns, investigators found in the laboratory along with the toxins. The nearly silent dart gun delivered the toxin in a needle that was a quarter-inch long and the width of a hair up to 100 meters away. The receiver of the dart may have felt a sensation of a mosquito bite, the dart quickly delivered the toxin into the bloodstream and immediately disintegrated, leaving no trace of any evidence at the autopsy. Meanwhile, the toxin caused rapid cardiac arrest and death. (Senate Select Committee Hearing 1975).

The committee made public C.I.A. documents showing that the agency had a vast array of ‘poisons, including many that would cause deadly diseases.

The cancer that would go on to claim the life of such a high profile political activist was first discovered following an injury. Marley broke his toe playing soccer in Paris in 1977. Unfortunately, it was the same toe that wouldn’t heal from being pierced by the copper wire. Doctors not only found the rare form of cancer but determined that it had metastasized. When told, Marley felt certain that he could fight it. It wasn’t until 1980 that Marley finally became convinced to seek proper medical help. By this time though, it was too late.

While he did undergo several radiation treatments, the New York newspapers learned of his illness. Marley checked out of the Sloan-Kettering Cancer Centre and invited to talk to Dr. Josef Issels. Issels was a German Holistic Immunotherapist with a practice at the Ringberg Clinic in Bavaria. When Marley traveled there for a consultation, Issels immediately let slip that he had heard all about Marley’s reputation: “I hear you’re one of the most dangerous black men in the world.”

Did the CIA make good on their promise to take the life of the Reggae legend by injecting him with a cancerous agent? A plan such as this would have held a calculated risk regarding treatment. Marley’s own religious beliefs did rely more on faith than appropriate medical care. Dr. Issel’s treatments were reputedly nothing at all to do with curing or even treating cancer. Some believe that he was a Nazi throwback, or even a surviving Nazi War Criminal, linking him to Josef Mengele himself.

Bob Marley’s legacy is his music. He might have also left us with a sad and perplexing mystery.

Santorini and Atlantis: Are They The Same?