Humans naturally cling to life, so the idea of suicide is shocking and disturbing. But many people are driven to that extremity by outward circumstances, inner chaos, or both. Sometimes they leave suicide notes behind, one last message to a joyless world. 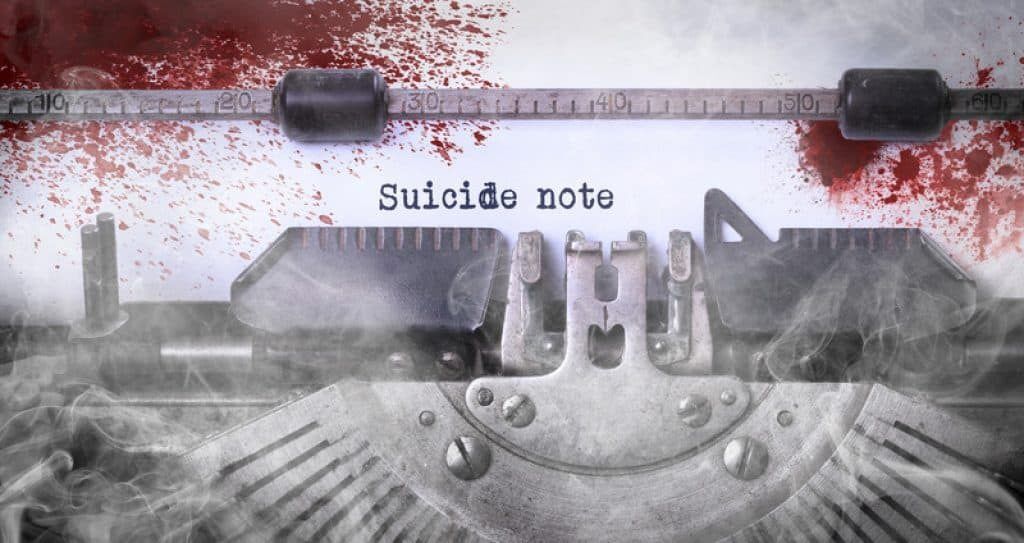 Are these suicide notes an explanation, a despondent recap of the existence that overwhelmed them, a final goodbye? They may be some or all of these. It’s at least certain that, at this darkest time of life, suicide notes can be just as bleak.

Listed below are three real suicide notes from the files of a psychiatrist.

The first note was written by a 59-year-old married woman suffering from an incurable disease:

I am now convinced that my condition is too chronic, and therefore a cure is doubtful. All of a sudden all will and determination to fight has left me. I did desperately want to get well. But it was not to be–I am defeated and exhausted physically and emotionally. Try not to grieve. Be glad I am at least free from the miseries and loneliness I have endured for so long.

My mind–always warped and twisted–has reached the point where I can wait no longer–I don’t dare wait longer–until there is the final twist and it snaps and I spend the rest of my life in some state-run snake pit. I’ve lived 47 years–there aren’t 47 days I would live over again if I could avoid it. I am going out–and I hope it is out. Imagine God playing a dirty trick on me like another life! Will you see Valerie through college–she is the only one about whom I am concerned as this .38 whispers in my ear.

And this brief but chilling one from a 45-year-old married man:

Cathy, don’t come in. Call your mother, she will know what to do. Love, Daddy. Cathy, don’t go in the bedroom.

Rock musicians often dwell on dark things, and Norwegian singer Per “Dead” Ohlin of the band Mayhem was no exception. He used the stage name Dead, and, obsessed with death, he finally embraced it. His suicide note read:

Excuse the blood, but I have slit my wrists and neck. No one will understand the reason for this, anyway. To give some semblance of an explanation, I’m not a human, this is just a dream and soon I will awake. It was too cold and the blood was coagulating all the time, plus my new knife is too dull. If I don’t succeed dying to the knife I will blow all the shit out of my skull.

In 1987, the state treasurer of Pennsylvania, Budd Dwyer faced 55 years in prison for a bribery conviction. Calling a news conference, presumably to announce his resignation, he read this statement:

I am going to die in office…Please leave immediately if you have a weak stomach or mind since I don’t want to cause physical or mental distress.

He added, “Please, please leave the room if this will affect you.” Dwyer then pulled out a gun and shot himself to death, which news cameras caught and sent out over the air.

He made millions of people laugh with his comedy, but Tony Hancock was deeply troubled.

Tony Hancock was a popular British comedian in the 1950s and 60s. But a series of problems, including a severe concussion that affected his memory, conflicts with fellow actors, alcoholism, and divorce, led to his suicide in 1968. His death resulted from vodka and barbiturates. He summed it all up in his suicide note with:

Things just seemed to go too wrong too many times.

If you or someone you know is considering suicide, please call the National Suicide Prevention Hotline at 1-800-273-8255. Someone is available to take the call 24 hours a day. Alternatively or for international visitors, please visit here.

Giants In India? The Kashmir Giants of The...

Kukaniloko: Why did Hawaiian Royalty come here to...

Who was Dina Sanichar, The Real-Life Mowgli Raised...