History of the Amber Room and Its Mysterious Disappearance

A stunning work of art made of panels of glowing amber, jewels, and gold, the Amber Room was initially built as a chamber for Queen Sophie Charlotte at her palace (named Lietzenburg) in Berlin, Prussia. The meandering history of the Amber Room took it from Berlin to Russia to Königsberg, and then its ultimate fate became a mystery that has never been solved.

What makes this treasure so unique and valuable is its primary component, amber, which is the ancient fossilized resin from plants. Samples can range in age from about 15-300 million years old. When light shines on amber, the resin has a brilliant translucency that makes it highly valued by artists and collectors. Thus, amber commands a stunning price tag. Perhaps its best known and inspired use was the creation of the Amber Room.

History of the Amber Room

Origin of the Masterpiece

The history of the Amber Room goes back to Lietzenburg in Prussia. Lietzenburg was initially the personal summer palace of Sophie Charlotte, who became “Queen in Prussia” in 1701. That same year, she requested that construction should begin on her chamber in her palace. The designer of the room was Andreas Schlüter and the builder was Gottfried Wolfram, an amber craftsman. After Sophie died just four years later in 1705, her husband King Frederick, who loved Sophie very much, named her summer palace “Charlottenburg Palace” in her honor. 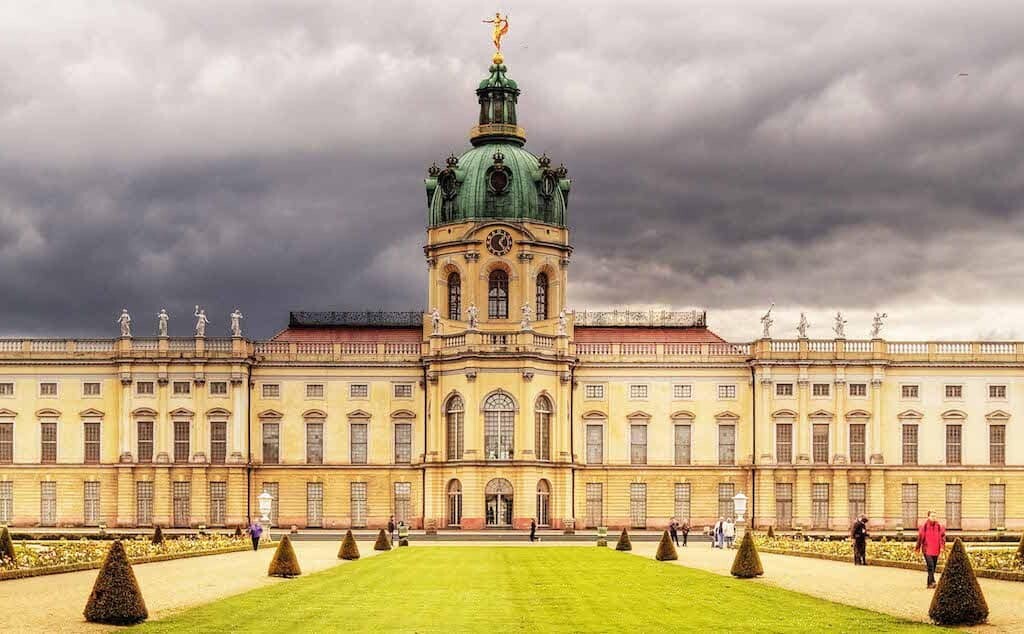 Even after her death, the king carried out Sophie’s vision to build her special chamber. It took more than 10 years to complete, but once King Frederick displayed it, everyone thought it to be a stunning masterpiece.

“The Amber Room is a priceless piece of art, with extraordinary architectural features such as gilding, carvings, 450 kg (990 lb) amber panels, gold leaf, gemstones, and mirrors, all highlighted with candle light. Additional architectural and design features include statues of angels and children.”

However, the room built for Queen Sophie was not destined to remain in Prussia. Her son had political ambitions that outweighed his sentimentality for the amber chamber.

The Room is Gifted to Czar Peter the Great

During a visit to Prussia in 1712, Czar Peter the Great of Russia confided in King Frederick William I (Queen Sophie’s son) on how much he adored this stunning room. In order to cement an alliance with Russia against Sweden, King William I presented the amber masterpiece as a gift to Czar Peter the Great. William shipped the gift over water to St. Petersburg, Russia, in 18 large boxes in 1716. 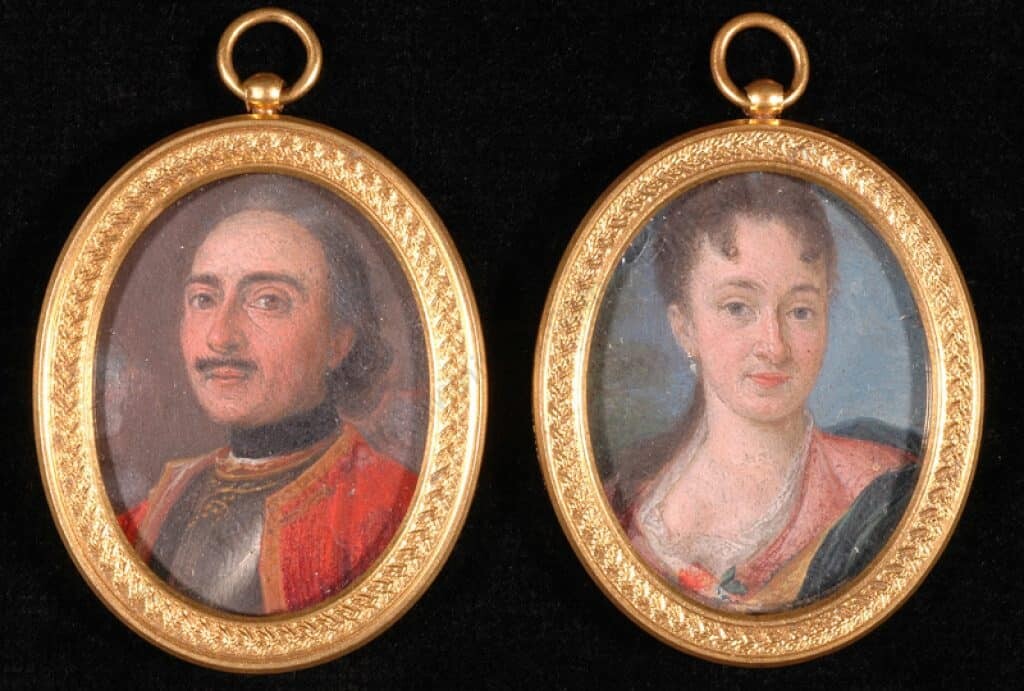 Peter the Great and his wife, Catherine. The Amber Chamber would remain with them until 1941. Source: unknown.

Once in St. Petersburg, the Czar began renovations and added onto the room even more. It measured 55 meters with over six tons of amber in its final form in 1763. It was so majestic that people thought of it as the “Eighth Wonder of the World.” The room sat in the Catherine Palace of St. Petersburg, but it was not put on display as it had been at Charlottenburg Palace, and viewing was reserved for few people.

The amber chamber remained in St. Petersburg until 1941. In that year, Germany invaded the Soviet Union in Operation Barbarossa. The Nazi acquisition of all art and treasure was a high priority, and they plundered everything they could get their hands on. Naturally, the amber chamber was a paramount target, and the Nazis aimed to take it back to German soil.

When Leningrad (formerly St. Petersburg until 1914) was about to fall to the German forces during the invasion, the Russians tried to move the chamber to a safe location. However, because the dried and fragile amber crumbled, they instead decided to disguise it by placing wallpaper over the panels to make it look like an ordinary room.

The Germans were not fooled. They knew exactly where the room was and they were prepared to transport it. Within 36 hours the Nazis dismantled the room and placed it inside 27 crates on 18 trucks. Then they transported it to Königsberg Castle in eastern Prussia. Subsequently, they reassembled it and placed it on exhibition in March 1942.

The war did not stay in Germany’s favor for long. In August of 1944, Royal Air Force bombers heavily damaged Königsberg and much of the castle. On April 9, 1945, the Germans surrendered to the Soviets who took siege of Königsberg and forced the Germans out. They renamed the city Kaliningrad, and today it still belongs to Russia. (Wikipedia, “Königsberg Castle”).

Theories on the Disappearance of the Room

Although there are numerous theories about the history of the Amber Room, these are a few of the most popular:

The eastern side of Königsberg Castle in 1910. Wikipedia, public domain.

According to a Smithsonian article, “A Brief History of the Amber Room,” the director of the Königsberg Castle museum, Alfred Rohde, had studied the room while it was there. “In late 1943, with the end of the war in sight, Rohde was advised to dismantle the Amber Room and crate it away.” Where the Nazis hid it after that is the great mystery.

Possibly a witness at the time, Leonid Arinshtein, a lieutenant in the Red Army that took siege of Königsberg in 1945, said that he went to the Königsberg Castle and saw pieces of amber relics. When he asked the museum custodian about them, Arinshtein was told that the rest of the panels were boxed up in the basement. Because Arinshtein did not understand the significance of the items, he didn’t pursue it. Days later when he attempted to get back to the castle, it had already been engulfed in flames. (NBCnews.com: “Mystery of the Amber Room Resurfaces”).

In the same NBC article, Avenir Ovsyanov, an official on the search and protection of missing art with Kaliningrad’s regional government, stated that some portions of the room did burn in the Königsberg Castle. However, he felt that it is likely the Nazis took away most of it before the Soviets had time to secure the city. Today, he and his team are still searching underneath the ruins of the war for clues to the whereabouts of the amber panels.

Was the Amber Chamber Ever Found?

Pieces of the original room have been found since 1945. The most recent finding was in 1997 when one of the four stone mosaics that went into the decoration of the room was recovered in West Germany. It was in the possession of the son of one of the soldiers who packed it up, but the son claimed that he did not know where it had come from.

Recently in June of 2016, The New York Times published an article regarding possible clues to the location of the amber panels. According to the article, some Polish villagers who were alive in 1945 told the director of the Polish Mamerki Museum, Bartlomiej Plebanczyk, that they saw Germans unload large crates from a convoy of vehicles. They said the Germans put the crates into a “secret chamber in a stark, moss-covered Nazi bunker near the Russian border in early 1945” (NYT). Plebanczyk and his team used ground penetrating radar to scan underneath the bunker, and they found what appeared the be a chamber. The team planned to dig under the bunker, however, they have not yet published any findings.

Mamerki bunker in Northeastern Poland may contain the amber relics or other Nazi-looted treasure. Source: Panoramio.

Reconstruction of the Amber Chamber

The Soviet Union commenced on the reconstruction of the room using mostly black and white photographs in 1979. In 2003, the replica was nearly in completion. On the 300th anniversary of St. Petersburg, President Vladimir Putin and German Chancellor Gerhard Schröder unveiled their new amber chamber. Today, the public is able to tour Catherine Palace and view the replica.

Queen Sophie Charlotte’s vision of her amber chamber manifested into one of the most splendid and coveted treasures of all time. Its mystery is still ablaze with the burning desire of governments, scholars and treasure hunters to find it. If the room still exists, the fragility of the amber may have turned it into something that scarcely resembles its original opulence that once was the crown jewel of Charlottenburg Palace.

Judith Rypma has produced two collections of poems about the amber treasure. This excerpt from “Twists and Turns” sums up perfectly:

Finding Atlantis has proved much easier.
Inspired fewer theories
though not as many debates
about who should receive
the spoils of war

Was Robin Hood a Real Person or Just Fiction?