Colloquialisms with regards to the weather are fairly standard for the English language for residents of the UK. Phrases such as ‘raining cats and dogs‘ and ‘brass monkeys‘ may or may not have spread to other English speaking countries around the world such as America, Australia, and Canada. Animals have not been used solely to describe the climate, there are reports that they have become the weather. 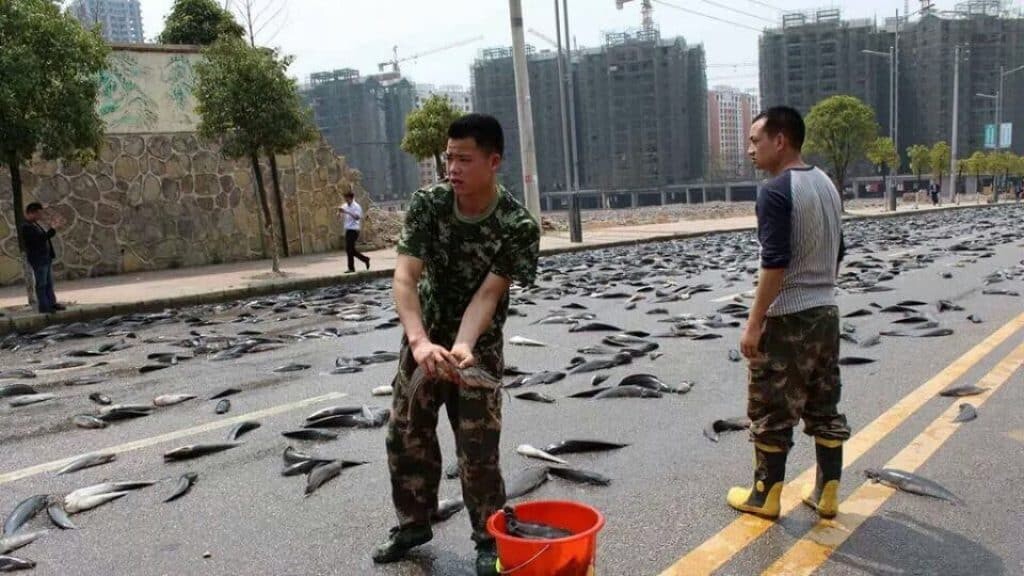 A History of Bizarre Rain

So many items have become synonymous with rainfall down the centuries that an entire catalog of reports has been made across the globe. Animals found after rainfall include squid, worms, fish frogs and even larger animals like alligators have been recorded. The commonly held theory about these deposits is that an updraft over the sea carried these animals over a large distance that could exceed hundreds of miles inland. People living quite some distance from a coastline or lake then wonder why the streets are littered from the raining fish or other marine animals.

If that could explain animals falling like rain, then what about items such as cobwebs, nuts, jelly, and cash? Perhaps the most bizarre of all bizarre rain has to be flesh and blood. Back in the 19th century – long before the development of air travel – Calabria, Italy recorded rainfall of bird blood. The conclusions of this incident assumed that somehow turbulent winds or the jet stream had somehow ripped the birds to pieces.

The only problem is that only the blood fell onto the streets, not the torso of the birds. Half a world away, in Los Nietos, California, flesh, and blood fell for almost five minutes in 1869. several acres were covered in the grisly rain. Even earlier than this, in 1841, the town of Lebanon in Tennessee, fat, and muscle rained down on field workers. These workers reported a rattling sound coming from within a red cloud overhead.

In more modern times, many strange items have fallen out of the sky, sometimes on a clear day.

Other Strange Things Raining From The Sky 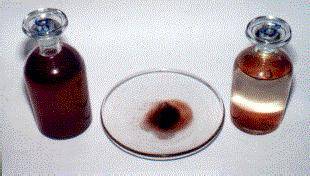 Samples of red rain which fell in India. Image credit: Vsasi CC BY 2.5.

In Kerala, India, red rain fell was seen falling from the sky. This was so pronounced that white cloth was transformed into pink. After discounting a meteor as the culprit, an analysis was done on the rain. It was found to contain fungal spores. Nobody could work out how such spores managed to contaminate summer rainfall.

As strange as rain like this can be, there are not many occasions where odd items rain down on a persistent basis. For four years from 1982, several houses in Evans, Colorado, had kernels of corn fall upon them periodically. With no cornfields close to the town, residents could not figure out where they came from originally.

Unconfirmed reports from the Sea of Okhotsk claim that a Japanese trawler was sunk by a cow falling onto it from a great height. Survivors of this wreck told their rescuers that the cow that struck their vessel was just one of several that fell from the heavens.

The small village of Yoro in Honduras have so many occasions of raining fish that an annual festival to commemorate it. The villagers call this the Festival de la Lluvia de Peces.

Thousands of frogs fell on a town in Northern Serbia and immediately began a search for local water. All of these frogs were not native to the region.

The big question is how does it happen? How can climate conditions manage to disseminate between one kind of crop over another and then choose to deposit it on a town or area miles away? There is a working theory behind the basic principle of bizarre rain, but this can only explain so much. Colored rain is often the cause of dust within the atmosphere. Western Washington had yellow rain one day in 1998 and the origins of this were traced to the Gobi Desert. Dust from the Sahara has also been known to have drifted across the Atlantic. If this dust were to interact with rainclouds then the dust can become trapped within the rainfall.

The color of the rain is determined by the nature of the dust involved. Red rain is more likely to originate from the Sahara. Black rain will more than likely be volcanic in nature but could be the result of pollution. During the 19th century, European sheep were turned black because of soot that came from industrial processes from England and Scotland. Black snow that fell on India in 1991 was attributed to burning oil wells of Kuwait during the Gulf War.

The real truth behind bizarre rain is that science can only really say for certain that it happens more than the layman will tend to think that it does. Nobody can say definitively that this is why it happens. Next time you are outside in the rain, it might be an idea to look up because you just don’t know what is coming down.