On the morning of  January 31, 1921, the Carroll A. Deering, a beautiful, huge, five-masted schooner was found hard aground on Hatteras Diamond Shoals, North Carolina. The crew was nowhere to be found.

Abandoned and deserted, with all of its eleven crewmen missing, the circumstances are as strange as those of the Mary Celeste, and her demise remains as one of the greatest unsolved maritime mysteries of all time. 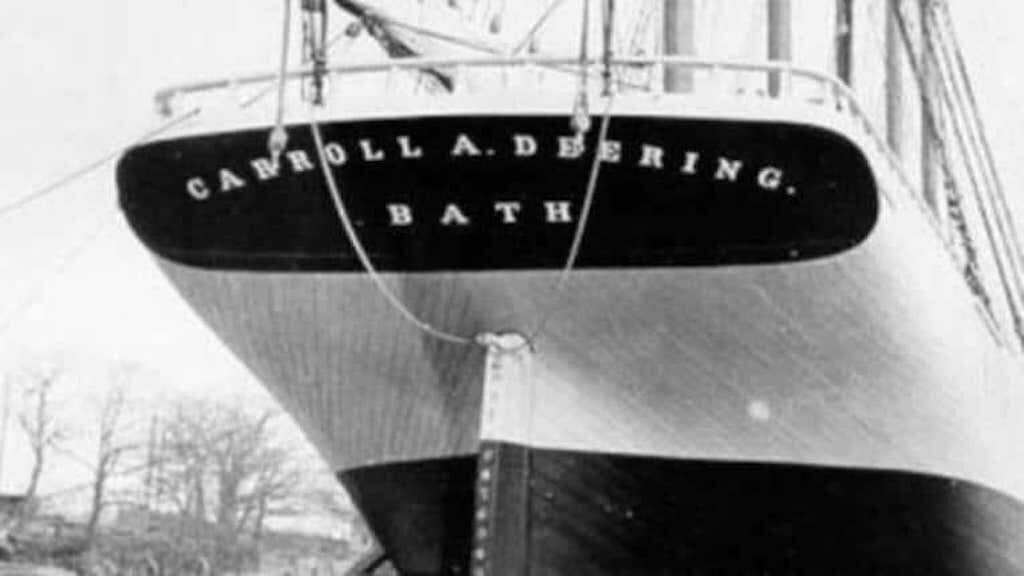 Stern view of the Carroll A. Deering

Examination of the Wreckage

Her sails were up and the galley showed evidence that a meal was about to be prepared.  The crews’ personal effects were gone, along with the ship’s navigational equipment,  logbooks, and life rafts.  Also mysteriously missing were the eleven crew members of the vessel.

Construction of the Deering 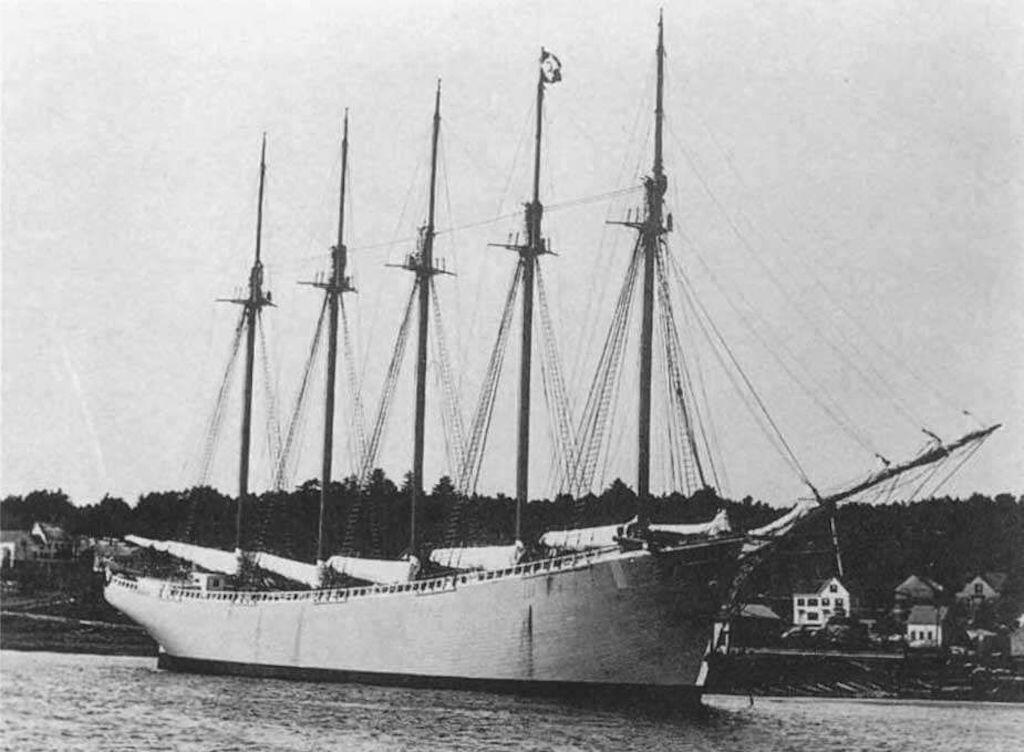 Described as being a tremendous ship, measuring 255 feet long and 45 feet across, the Deering was designed for cargo service.  Only the best stock was used in constructing this three-deck vessel. Her features included an oak ceiling and planking of hard pine, a handsome combination of mahogany, empress, and ash woods were used to finish the interior.  Oregon masts measuring 108 feet long, with topmasts measuring  46 feet long flanked the vessel.  Other luxurious features included a bathroom with open plumbing and cabins fully lit by electricity and heated by steam.

Indeed, she was a wooden boat enthusiasts’ dream.  Mrs. Carroll Deering stood at the bow of the ship and christened it using a large bouquet of roses which she scattered as the vessel made its descent down the ways.

The Carroll A, Deering schooner was being prepared to sail from Boston to Buenos Aires, then on to Rio de Janerio.  In charge of the voyage would be part owner and Captain,  William M. Merritt who chose his son, S.E. Merritt as his first mate.  Nine other Scandinavian men were hired as crew. On August 20, 1920, they set sail for Boston.  Later that same month, after sailing from Boston, Captain Merritt became ill and the vessel was diverted to port in Lewes, Delaware.  After determining that the captain was too ill to continue the voyage, he was left in Lewes.  His son, E.E. Merritt also disembarked the ship to care for his dad.

Left without a captain and first mate, the Deering Company hastily hired replacements for the positions.  Captain Willis T. Wormell, a veteran retired shipmaster, and experienced navigator was chosen as the new Captain.   He hires Charles B. McLellan as his first mate. 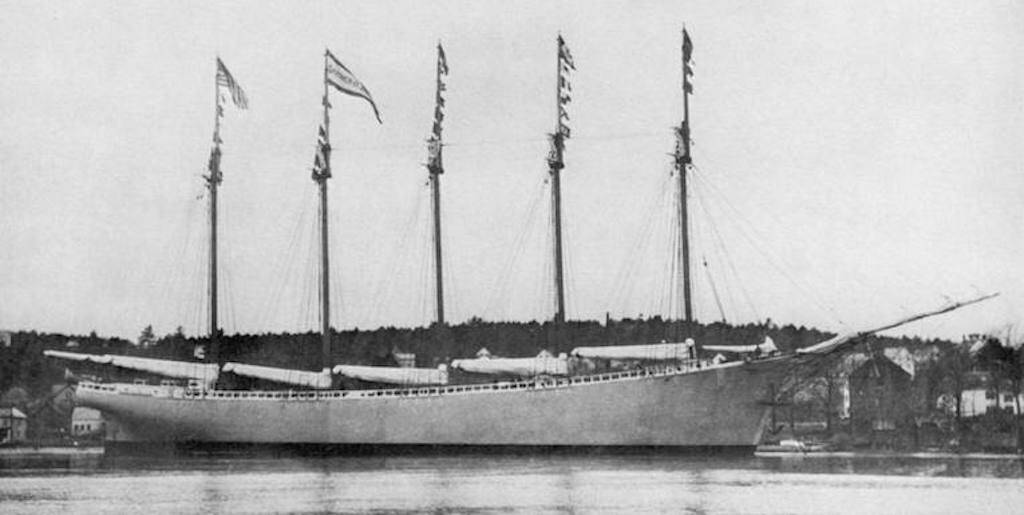 The Carroll A. Deering

On September 8, 1920, the Deering finally got underway for Rio de Janerio with a cargo of coal.

The vessel arrives without incident and the crew was given time off.  In the meantime, Captain Wormell met with an old friend, also a Captain, Wormell confided in him that he does not like his crew and the behavior of his first mate concerns him.  They agree that the ship’s engineer, Bates can be trusted.

On their return trip from  Rio de Janerio, a series of events occurred ultimately ending with the Carroll A. Deering running aground.

Timeline of Events in the Final Voyage of Deering

January 25, 1921:  Another ship, the S.S. Hewitt with a crew of 42, disappears from the same area while sailing on a similar course as the Deering. She was last heard from on this date.

January 29, 1921:  Carroll A. Deering reported having passed Cape Lookout Lightship, sailing at 5 mph.  A man on board got the attention of the passing ship and said the vessel had lost both anchors and asked if he could report it to its owners.  the crewman did not act or look like an officer.  Shortly after, a passing steamer was asked to stop by the Lightship to take the message for the schooner.  It is a maritime law to respond to the whistles of the Lightship.  However, the steamer, whose ship name could not be seen, did not stop and continued sailing on.

January 31, 1921:  The Carroll A. Deering is spotted with all sails set riding a sandbar at Diamond Shoals.  According to the official report:

She was driven high up on the shoal… in a boiling bed of breakers with all sails set as if abandon in a hurry.

All personal effects belonging to the crew were gone, along with all of the ship’s navigational instruments, and the lifeboats. 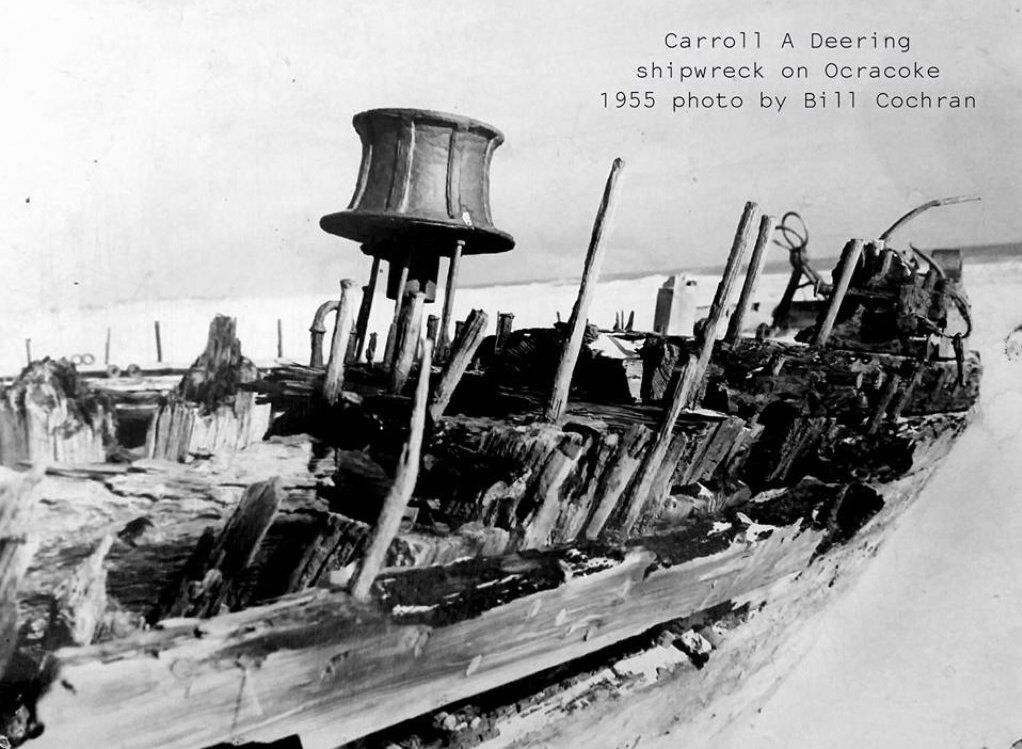 Wreckage of the Carroll A. Deering. Image Credit: Bill Cochran.

Rescue ships were unable to board the ship due to bad weather and it was not until February 4 that the ship was boarded. The Coast Guard attempted to salvage the vessel but was unsuccessful. The Carroll A. Deering was eventually scuttled with dynamite on March 4.

Despite an extensive investigation by the U.S. Government that included the Commerce, Treasury, Justice, Navy, and State Departments, no explanation could be found for the crew’s disappearance.

There were a number of theories considered by the U.S. Government during their investigation that included piracy, mutiny, a hurricane, Russian or Communist piracy, Rum Runner’s, or an unexplainable paranormal event.

The investigation finally wound down and came to end in 1922 with no official explanation ever being found.

Additional Literature on Amazon:
Ghost Ship of Diamond Shoals: The Mystery of the Deering

Lost Soviet Cosmonauts: Were There Cover Ups of...

The Mysterious Disappearance of the Five Sodder Children