The SS Baychimo is a 1,322-ton cargo ship that became trapped in an ice floe in 1931. The crew soon abandoned the ship, but the unmanned vessel continued to be sighted floating off the Alaskan coast for the next four decades. 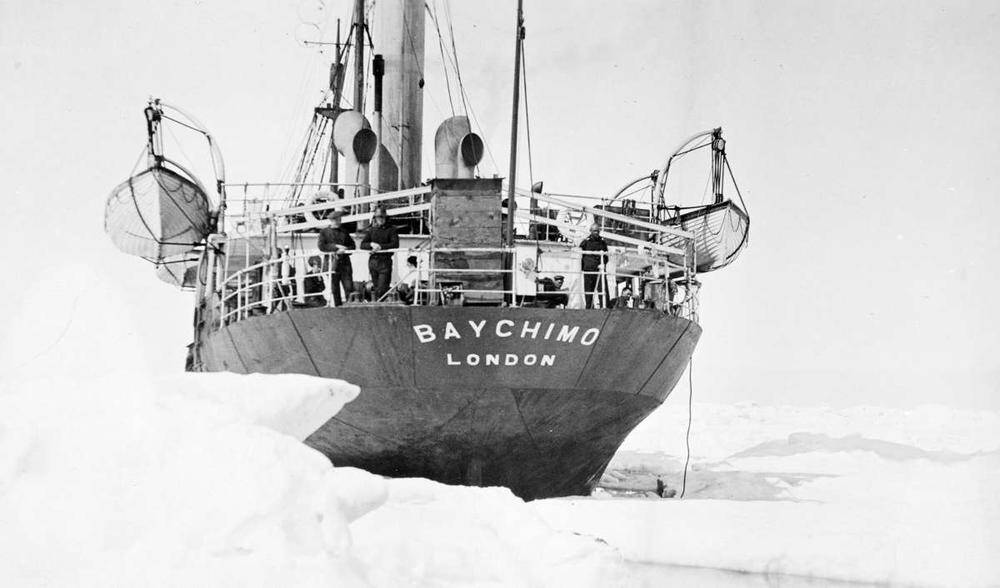 An aft view of the ship trapped in ice.

There are many stories about ghost ships: phantom ships occasionally seen by people which, the stories go, foretell doom to those that encounter them.

However, this is not a ghost ship in the traditional sense, as it is/was very real.

Built in 1914 in Sweden, the 230 ft, 1,322-ton cargo steamer Angermanelfven sailed the trade routes between Hamburg and Sweden. After World War I, ownership of the vessel transferred to the Hudson’s Bay Company. The steamer, renamed SS Baychimo, made numerous sailings for Hudson’s, mostly delivering fuel, food, and supplies for pelts at Eskimo trading posts along the Victoria Island coast 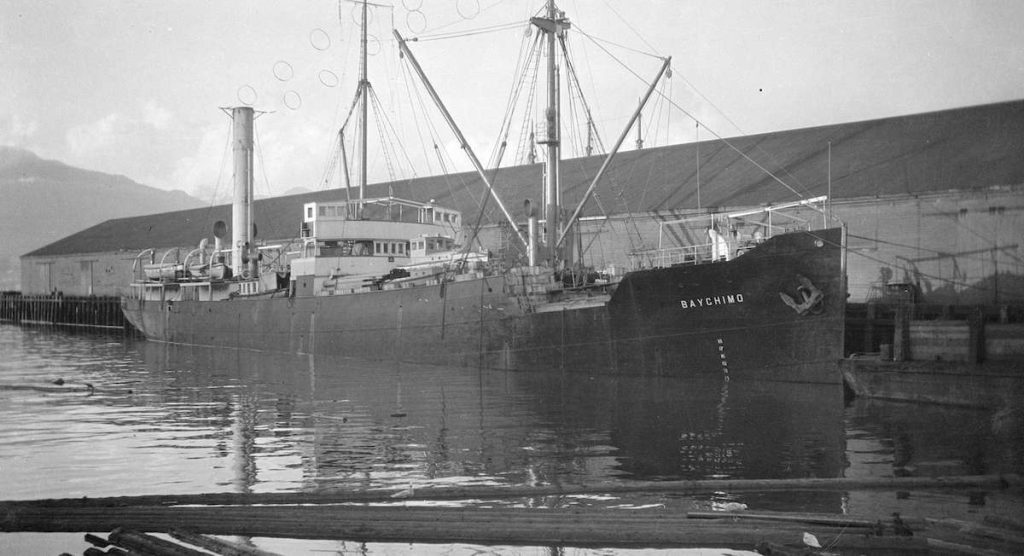 On October 1, 1931, the steamer was on a routine voyage, filled with recently acquired furs. An unexpected storm blew in, trapping the ship in an ocean filled with ice. The closest city was Barrow, Alaska, the northernmost city in the United States. However, the blowing snow and high winds made it impossible to reach. Captain Sydney Cornwell and crew hunkered inside the trapped ship, to wait out the storm.

By October 15, the ship remained locked in the ice off the coast of Wainwright. They subsequently airlifted 15 of the crew to safety. The captain and 14 other crew members who remained made a temporary wooden shelter on the ice near the stranded ship. 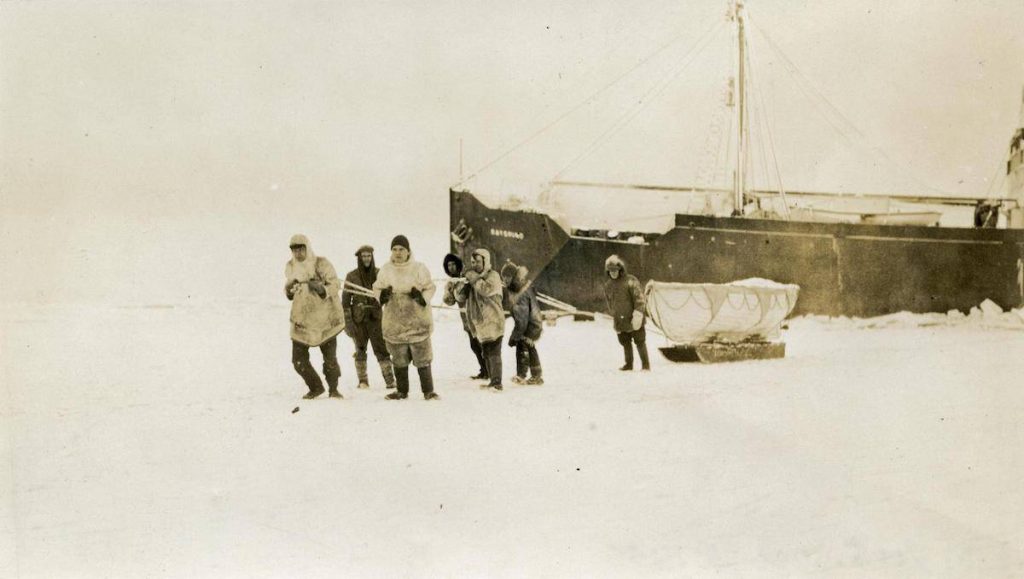 The Captain and 14 others making camp on the ice.

The terrible weather continued to pound down on the crew, and the “temporary” camp lasted for weeks. A fierce blizzard hit the area on November 24, and the snow became so heavy that the campers could no longer see the Baychimo, still afloat, and trapped in the ice. The following morning their worst fears came true. The ship vanished, no doubt sunk by the preceding blizzard. The remaining crew made their way back to civilization.

Less than a week later, however, an Inupiat hunter told Captain Cornwell the ship did not sink. He recently saw it floating in the icy waters near Skull Cliff, south of Barrow. This is fifty miles from the location where the crew abandoned the vessel. The captain, somewhat reluctant to battle the snow to find the ship, gathered his crew and found the ship precisely where the hunter stated. 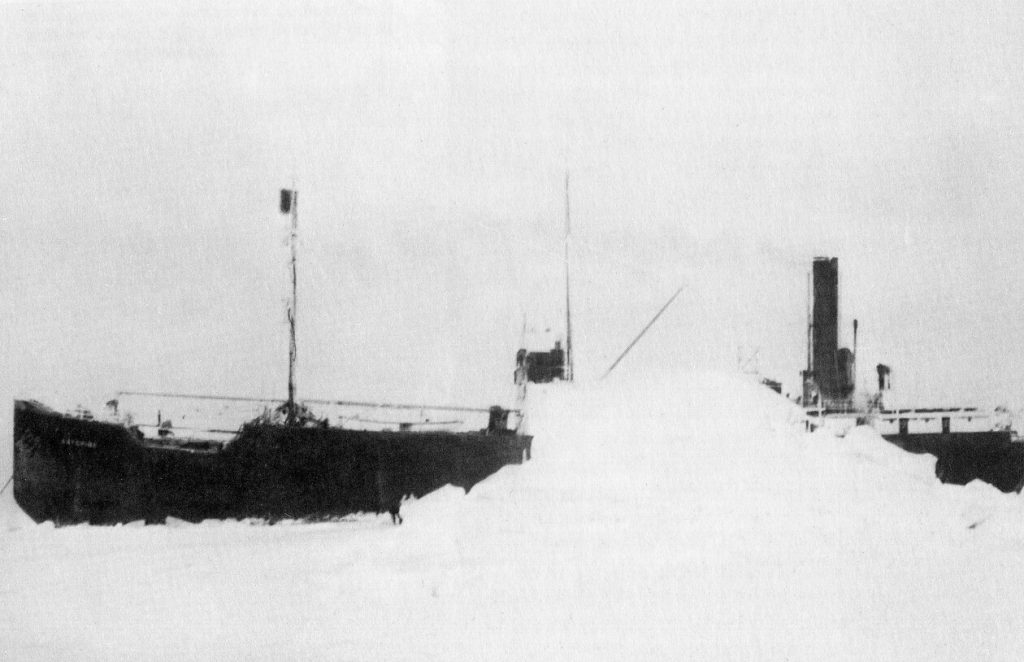 The ship looked to have sustained significant damage. Captain Cornwell feared it wouldn’t be seaworthy for much longer and would soon break apart and sink. The remaining crew salvaged the cargo of furs, and they and the goods were airlifted out of the area.

And so, this is where the story should have ended. But it didn’t.

Over the years, residents of the area and other ships have spotted the unmanned ship numerous times. It appears that the ghost ship began gliding silently across the Arctic waters, drifting from one location to another, totally intact.

Aa trapper, returning to Nome with a dogsled, Alaska boarded the trapped vessel in the Beaufort Sea in March of 1932.

In March of 1933, some Eskimos, trapped by a storm, took shelter in the Baychimo for a week until the weather improved enough to journey back to their homes. 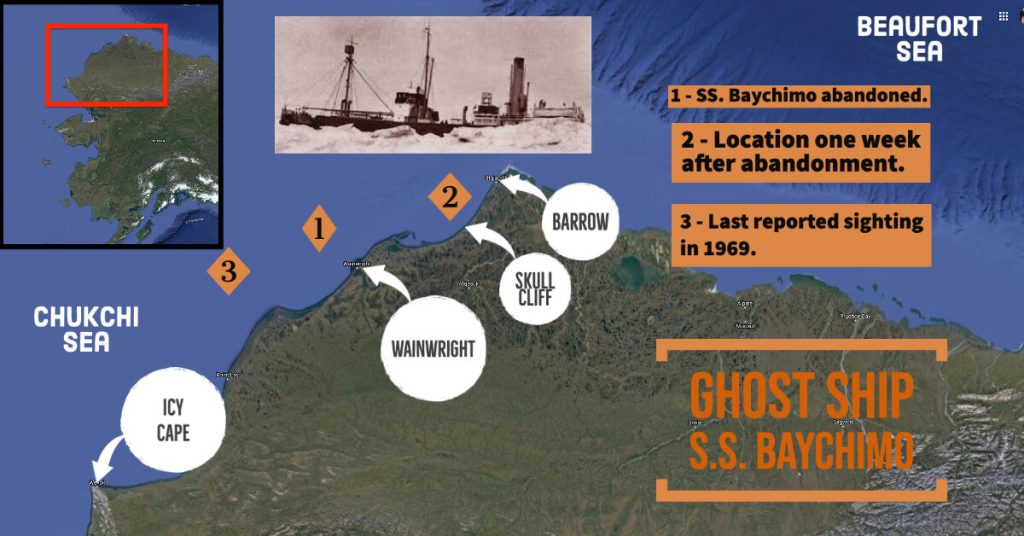 A diagram showing the movement of the ghost ship.

In November of 1939, another ship came close enough to it that they were able to board the abandoned ship. However, due to the approaching ice floes, the captain did not have the time to bring it back to a port. Although he did report the empty ship’s location.

In 1969, the Baychimo was spotted in the Chukchi Sea between Icy Cape and Barrow, once again trapped in an ice pack. This is the last recorded sighting of the ship. After a few years, most people believed that the ship eventually gave in to its deteriorating condition and sank in the frigid sea’s depth.

Not everyone believes this, though. In fact, in 2006, seventy-five years after the ship was first abandoned, Alaska formally began an effort to find the Arctic’s elusive wandering ship. However, they did not find it. The ship continues to remain elusive.

The Ghost Writer – Patience Worth