Before science revealed the mysteries of the seas, superstitions and lore reigned the lives of mariners. One example is ghost ships, which have been plaguing seamen since the dawn of sailing. The most famous of these is undoubtedly the glowing spectral schooner called the Flying Dutchman. Throughout history, strange sightings resulted in eerie legends that explain why sailors feared the phantom ship as an omen of impending death. 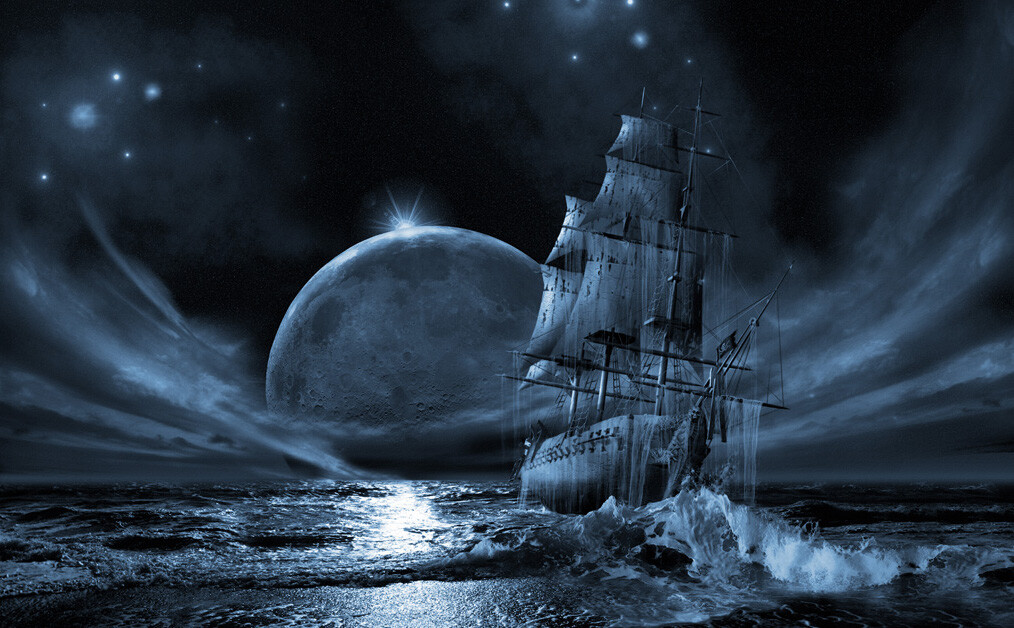 The legend of the Flying Dutchman originated in Holland in the 17th century. Image: Public domain.

Variations of the Legend

There have been many versions of the Flying Dutchman story throughout history. Most recently, Pirates of the Caribbean popularized the tale around the world. In the movie, the Greek goddess-nymph Calypso gave Davy Jones (her lover) the ship called the Dutchman to transport to the afterlife the souls of dead men lost at sea. When Calypso didn’t meet Jones after ten years, he became overwrought with grief and stopped ferrying the dead. Instead, he roamed the earth doing whatever he wished. For this, Davy Jones and his crew suffered a terrible curse that turned them into hideous mixtures of human/sea creature. As time passed, they became less and less human.

Early print versions of the legend from the late 18th century say that the Flying Dutchman sank in a terrible storm off the Cape of Good Hope (South Africa). It had tried but failed to enter the port, and all men on board perished with the ship. Subsequently, the ghost ship would appear to other vessels as a messenger of doom. Then it would vanish as suddenly as it appeared.

George Barrington from London served time in Botany Bay, Australia, in the late 1700s for pickpocketing. He later became a pioneer and author and wrote about the legend he heard regarding the Flying Dutchman. In his story, two Dutch ships sailed together toward the Cape of Good Hope when a storm overcame them. One made it to shore, while the other one sank along with all of its crew. When the surviving ship left the Cape to head back to Europe, it encountered another storm. In the dark clouds, crew members believed they saw their companion vessel that sank. When they arrived at the port, they told everyone about their ghostly sighting and called it the Flying Dutchman.

Some of the people saw, or imagined they saw, a vessel standing for them under a press of sail, as though she would run them down: one in particular had affirmed it was the former ship that had foundered in the former gale, and it must certainly be her, or the apparition of her; but on its clearing up, the object, a dark thick cloud, disappeared.

Tragedy on the S.S. Ourang Medan — Fact or Legend?

Later, other ideas about the phantom ship followed. For example, in author John Leyden’s write-up, the sailors aboard the vessel had committed some crime. God punished them with a dreadful disease, and because no port allowed their entry, they had to sail the seas until judgment day. Sir Walter Scott connected the vessel to piracy and great treasures and said that a crewmate murdered another on board. Thomas Moore introduced the concept that the ship speeds along with full sails, even though there is no wind. Many variants of the tale say the captain swore to sail the seas forever, and the devil obliged him.

The “Rime of the Ancient Mariner” was a long poem written by the Englishman Samuel Taylor Coleridge in 1797-1798. It possesses a few elements of the Dutchman and is a great story. In it, a mariner, who is now living onshore, stops another man on his way to a wedding ceremony. He tells the man a tale about a strange experience he had on the sea long ago. During this sea voyage, the mariner shot an albatross. This resulted in a curse that sent the ship and crew into the Doldrums near the equator. For days and days, they were stuck and unable to go anywhere.

Blackwood’s Edinburgh Magazine published a full story, Vanderdecken’s Message Home, about the Flying Dutchman in 1821. This version claimed that the Dutchman had left Amersterdam 70 years prior on its way to the East Indies for trade. Its commander, Captain Vanderdecken, brought a curse upon himself (and the crew) during an angry outburst in a storm as he tried to round the Cape of Good Hope. The devil heard his exclamation that he would “beat about here till the day of judgment” and damned him to remain in those seas. In the following excerpt, the Dutchman comes near the witnesses’ ship and makes contact:

“The next flash of lightning shone far and wide over the raging sea, and showed us not only the Flying Dutchman at a distance, but also a boat coming from her with four men. The boat was within two cables’ length of our ship’s side. . . . One of the men came upon deck, and appeared like a fatigued and weather-beaten seaman, holding some letters in his hand. Our sailors all drew back.

The chaplain, however, looking steadfastly upon him, went forward a few steps, and asked, ‘What is the purpose of this visit?’ The stranger replied, ‘We have long been kept here by foul weather, and Vanderdecken wishes to send these letters to his friends in Europe.’ Our captain now came forward, and said as firmly as he could, ‘I wish Vanderdecken would put his letters on board of any other vessel rather than mine.’ The stranger replied, ‘We have tried many a ship, but most of them refuse our letters.'”

The Opera That Popularized the Flying Dutchman

Richard Wagner’s opera, Der fliegende Hollandermade, made the story of the Flying Dutchman famous. In his rendition, the Flying Dutchman is not the ship, but the captain. The scene takes place off of Norway rather than the Cape of Good Hope. He also adopted some of Heindrich Heine’s version. This added the idea that every seven years, the captain could go to shore to search for a woman who could set him free through her endless love.

Origin of the Dutchman’s Story

The original story of the Dutchman may stem from the 17th century. Though many sources attribute the term, Flying Dutchman, to a spectral ship, other historians believe the inspiration was one of the Dutch East India Company’s real captains. Bernard Fokke is one possibility. He became legendary for his record-fast trips between Holland and Java, via the Cape of Good Hope. People didn’t think that anyone could accomplish such a feat and said that he must have made a deal with the devil.

The other possibility is someone by the name of Hendrick Van der Decken, who supposedly captained a Dutch East India Company ship that disappeared in 1641 somewhere between Holland and Asia. Some authors also used the name Captain Phillip Vanderdecken in some iterations of the story.

Sightings of the Flying Dutchman Ship

One of the most significant sightings of the ghost ship came from King George V of the United Kingdom. In 1880, he and his brother Prince Albert Victor were on a three-year voyage. On July 11, 1881, the Prince recorded a strange vision that appeared to them in the Bass Strait while aboard the HMS Inconstant.

He wrote that an encounter occurred at 4 am when the Flying Dutchman crossed their port bow. They saw “a strange red light as of a phantom ship all aglow, in the midst of which light the masts, spars, and sails of a brig 200 yards distant,” according to George’s description.

The officer on watch and several other sailors initially spotted the ship, but the vessel quickly disappeared. It didn’t end there, though.

George wrote that at 10:45 am, the sailor who had spotted the apparition suffered a gruesome fate. He fell from the masts onto the ship’s forecastle and died instantly. Naturally, everyone thought the phantom ship had been a supernatural warning of doom.

Although many sightings of the famous ghost ship have come from sailors out at sea, people on the shores also glimpsed the apparition. In 1939 and 1941, crowds of people at Glencairn Beach, South Africa, saw the Flying Dutchman under full sail on a collision course with the land.

According to a contemporary news report from the 1939 incident, the ship sailed on with “uncanny volition,” heading towards the shores of Strandfontein. Bystanders had a long, unobstructed view of the vessel before it disappeared in the blink of an eye.

The Lost Crew of the Mary Celeste

The 1941 report mirrors the first, with the phantom vessel heading towards rocks before abruptly vanishing.

The most recent sighting of the phantom ship occurred during the Second World War. The ship’s log of a U-Boat reported that crew members spotted the Flying Dutchman.

What became of the U-Boat and whether it ended up at the bottom of the sea is uncertain. Although the legend places most sightings off the Cape of Good Hope, this took place in the eastern half of the Gulf of Suez in the Red Sea.

What Causes Sightings of the Dutchman?

Phantom ships have contributed much to nautical lore for centuries. Naturally, scientists have attempted to investigate the phenomenon to determine what may be the cause. The most common and well-researched explanation is one type of mirage known as a Fata Morgana.

When atmospheric conditions are just right, the refraction of light causes a reflection of a ship or other object beyond the horizon. From afar, the mirage can seem like it’s floating above the water or in the sky, sometimes upside down and often with an eerie glow.

Because atmospheric conditions are volatile, the mirage can quickly disappear. This would explain why witnesses have said the Flying Dutchman vanished right before their eyes. The following video explains this phenomenon well.

So, what about the close-up sighting by King George? Why did it fool U-boat submariners? How does it account for the ill-fortune suffered by some of those who have seen the ship?

Although most people believe that there is probably no such thing as a ghost ship, this was not the case three hundred years ago. The men who spotted the Flying Dutchman believed that it was otherwordly and were truly frightened. For them, it meant certain peril in already frightening and mysterious waters. What they saw at sea became their tales on land, and their stories spread across the world. Throughout history, the fantastic legends profoundly touched the human imagination and inspired hundreds of pieces of art, literature, and entertainment. Today, the story of the ghostly vessel continues to evolve. For most of us, it is a story to enjoy, but for the still superstitious mariner, it is a phenomenon to steer clear of.

Is There Encoded Religious Meaning in the “Twelve...