Various versions of the Chase Vault story have been told throughout the years and details have become murky. It is hard to tell where the truth ends and lore takes over. But there was undoubtedly something unexplainable going on.

The Story of the Chase Vault

The tomb belonged to the Chase family, a family infamous for unusual behavior. The father of the clan, Colonel Thomas Chase, was so vicious that his slaves threatened to kill him.

Early in the 1800s, Colonel Chase purchased a large crypt in Christ Church cemetery. The first Chase family member buried in the tomb was the baby of the family, Mary Chase. She was placed in the tomb within a heavy metal casket in February of 1808. 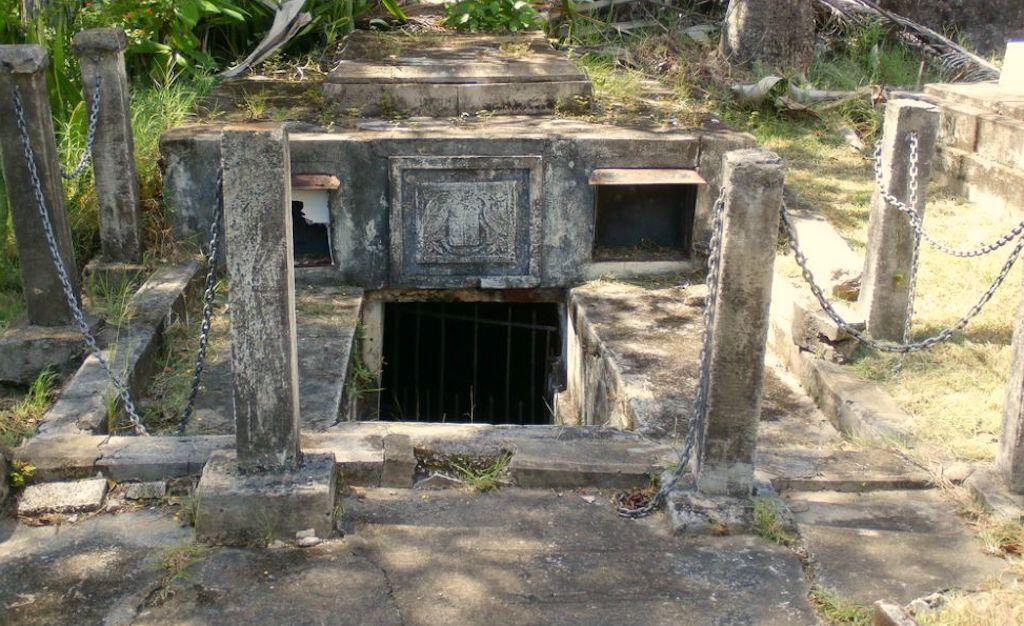 How the Chase Vault looks today.

In July of 1812, the teenaged daughter Dorcas Chase was buried. She had starved herself to death, and some say she killed herself due to the cruelties of her father.

Colonel Chase himself died in August (possibly a suicide) and was placed into the tomb in a metal coffin so heavy it took several men to carry it.

When they opened the tomb for his internment, they noticed that Mary’s coffin had moved from its original spot and was standing on its head near a corner of the tomb. Suspecting some kind of malicious mischief by somebody on the island, they righted the casket and made sure the heavy stone door of the tomb was sealed extra tight.

Two burials in 1816 again found the coffins inexplicably moved from their original positions.

The Hanging Coffins of China: Mysteries Along the Yangtze

In one burial, according to “The People’s Almanac,” a woman in the graveyard heard frightening sounds coming from the Chase tomb. Her horse became so terrified that it began foaming at the mouth. A few days later several horses in the area went insane and threw themselves into the bay.

A Final Effort to Seal the Crypt

In July of 1819, a relative was buried in the crypt and it was discovered that the chaos in the crypt had repeated itself. The governor of Barbados had attended this funeral and was determined to find out what was going on. When the caskets had been put right and the tomb was being resealed, the governor put impressions of his signet ring into the wet cement to ensure nobody could go into the crypt late at night and move the coffins around. Additionally, sand was sprinkled on the floor to capture any evidence of trespassers.

The positioning of the Chase Vault coffins.

In April of 1820, the tomb was opened for the final time. The signet ring’s marks were still clear in the cement, showing that nobody had entered the crypt by the front door, the only entrance to the tomb. The men opening the tomb had trouble opening the door. There was something pressing against the door from the inside. More men were called in to help with the effort. The door was finally opened to reveal Colonel Chase’s casket blocking the door and the other coffins scattered around the room. There were no marks in the sand on the floor.

The governor had had enough. He called for each coffin in the tomb to be buried elsewhere in the cemetery and the crypt has been empty ever since.

Many people over the years have attempted explanations for the strange phenomenon of the moving coffins of Barbados including earthquakes. However, no other tombs in the cemetery had ever been similarly disturbed. Flooding is another possibility, although no cracks were found in the crypt. Additionally, it is debatable if heavy metal coffins would float.

The movement of the coffins of the Chase tomb remains a mystery.

Sources:
The People’s Almanac Presents The 20th Century: History With The Boring Parts Left Out

The Hanging Coffins of China: Mysteries Along the...