Crooked Forest of Poland: How’d They Get Those Curves?

The Crooked Forest of Poland, or Krzywy Las, is a most curious natural monument that has caught the world’s attention. Near the Western border in the Gryfino Forest of Nowe Czarnowo, south of Szczecin, a stand of pine trees with a mysterious deformity lies in the middle of a healthy forest. At the base of each tree, a sharp bend in the trunk leads into a pronounced curve that snakes upward into mostly-straight upper growth. Although there are a number of theories (a few are actually realistic), nobody knows exactly how the pines got their curves. 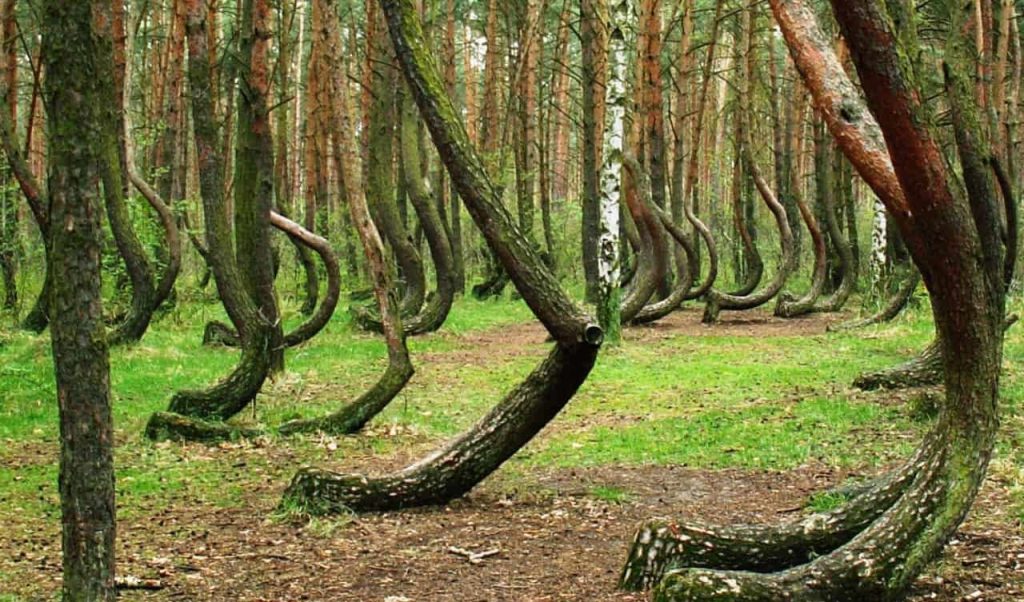 The Crooked Forest of Poland has inspired many theories about their origin. CC3.0 7alaskan.

Sorting Through the Fiction

As is the case with many mysterious unexplained phenomena, the imaginations of people around the world have run amok. Stories about Western Pomerania’s famous forest have grown taller by the year. Thus, there are some sensational reports and misinformation. In 1971, the article, “Peculiar deformation of pines (Pinus silvestris L.) in the Odra River,” by Eugeniusz Ćwikliński, reported 400 bent pines in 22 rows covering 1,670 square meters. However, according to Agnieszka Iwaszkiewicz’s article in The Epoch Times, there has never been confirmation of this in any other source. Officials indicate that the reality of the deformed pines is quite different than Ćwikliński’s report.

Naturally, the people who work within the forests are the best sources for accurate information. The Gryfino Forest District (the government agency that oversees the protection and management of the region’s forests) provides the following information on its website about the Crooked Forest.

Additionally, all the crooked trees bend toward the north.

Another Gryfino website indicates that tree rings in the knots of the bends indicate that something dramatic happened to the growing pines between their ages of 7-10 years old. Thus, if they were planted around 1943, the deformations took place around 1950-1953. If they were indeed planted in the early 30s, as some sources indicate, the deformations may have taken place around 1940. 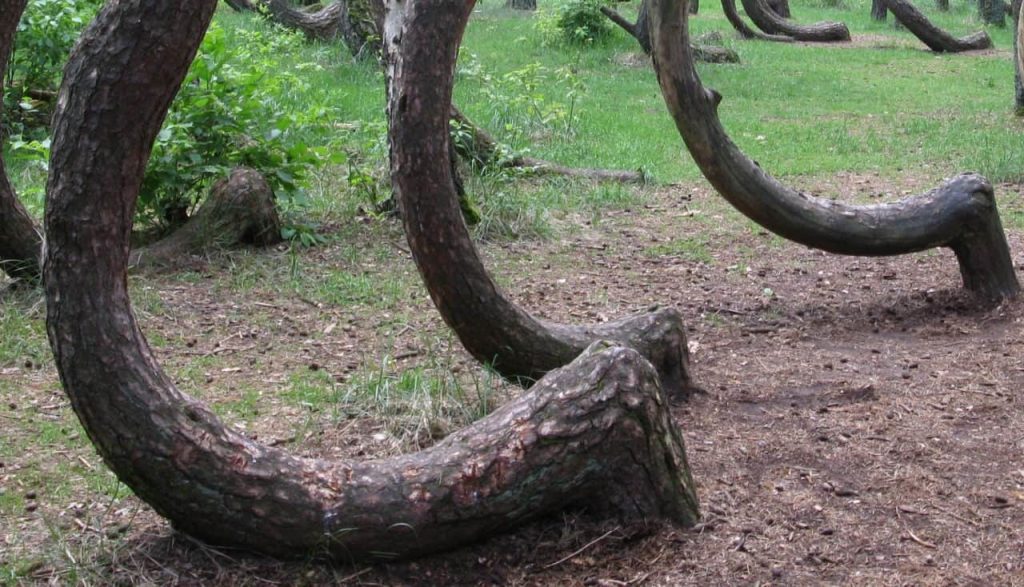 All the crooked trees seem to have undergone the same transformation. CC3.0 Rzuwig

There are no records of the planting of the Crooked Forest in Gryfino. However, WWII may have had something to do with it. Prior to 1945, Szczecin, the main city near the forest, was under German control, and a very small percentage of Polish minorities lived in the region. In early 1945, the Soviets seized Szczecin and, subsequently, the Allies moved the German/Polish border further to the west once WWII ended. Szczecin and most of West Pomerania then became Polish territory, and many Germans fled. By around 1950, the Polish military had fully expelled all the Germans.

While there are many theories as to how and why these trees grew in such a curved fashion, the absolute truth of the matter is unknown. Lidia Kmiecińska of the Gryfino Forest District says (Google translated from Polish), “This forest probably originated from the intentional activity of a man growing curves of trees for useful purposes.”

Kmiecińska says that the deformities do not result from German tanks that crushed the trees during WWII. Additionally, it wasn’t Nazi testing of secret nuclear weapons, aliens, or paranormal activity – all of which had been offered as possible explanations.

How They Got Their Curves

Most sources that agree humans created the Crooked Forest also agree on the probable method. While the tree was still young, someone cut the shoot partially across and then bent the still-attached portion. The remaining shoot grew accordingly into a curve and then straight up.

Who Abandoned the Trees?

The trees never had the chance to fulfill their purpose – whatever that purpose was. There is only speculation today. It appears, however, that someone began a project and was unable to reap the benefits of it. If a German individual planted the trees around 1943 as a business venture, it is possible that he also returned seven years later around 1950 to cut and shape them. Perhaps, though, it became dangerous for him to continue to live in the region and he had to move west into German territory. This would explain one reason someone might have abandoned the crooked pine tree project. Ultimately, we never know the truth.

The Crooked Forest became a natural monument in the 1980s. Over the years, the mystery of Poland’s curvy trees has drawn many tourists to the area. Although visitors will not find a “forest” of 400 trees, the grouping of 30 or so that everyone sees in the photos is stunning and may be worth a trip to Gryfino. It is a trip that should be taken soon because the shapely specimens are succumbing to the forces of time. As the trees die one by one, there will be a day in the future when the monument will cease to exist at all.

Dyson Spheres: Could We Build Our Own Gargantuan...