Home » Archaeology » Mystery of the Mummy in KV55
Archaeology

There is one enduring mystery of Ancient Egypt that comes to us, not from Giza, but from the Valley of the Kings on the West Bank in Luxor. It is a mystery that is entangled with the story of Tutankhamen, the mysterious King Smenkhkare and the Heretic King-Akhenaten. This mystery is that of KV55; otherwise known as Tomb 55.

A photograph of KV55 tomb soon after its discovery.

KV55 was discovered in the Valley of the Kings on January 6, 1907. A financier by the name of Theodore M. Davis and an archaeologist he hired by the name of Edward R. Ayrton uncovered the tomb. Once Davis’ team managed to get through the rubble blocking the entrances, they found a simple tomb with a single chamber and a small niche. A few items of note, such as a coffin, a gilded wooden shrine, and two clay bricks were found in the chamber itself. In the KV55 niche were four canopic jars.

Gilded and inlaid wooden coffin from KV55 in the Valley of the Kings, now in the Egyptian Museum of Antiquities in Cairo. The face and the cartouche containing the name of the coffin’s occupant were defaced in ancient times. Image: Hans Ollermann

The odd thing about all of these items is that they are connected to several different individuals, making it very difficult to determine to whom they ultimately belonged. They appear to have been brought to KV55 in a hurry either to entomb someone quickly or to provide a new tomb for someone who had already been laid to rest elsewhere. Why these particular items were chosen for Tomb 55 is unknown.

The canopic jars found in the niche of KV55 appear to have been made for one of Akhenaten’s wives, Kiya. The lids of the jars contained the effigies of four women. It has been suggested that some or all of the women on the jars were the daughters of Akhenaten. None of the jars had been used.

The gilded wooden shrine in Tomb 55 is known to have been made for Queen Tiye, Akhenaten’s mother. The clay bricks bore the name of Akhenaten.

Built for Kiya and Altered for a Man

The coffin found within KV55 has proven to be quite perplexing. The coffin was obviously made for a woman, quite possibly for Kiya. However, it was altered to suit a man and a beard was added. In ancient times, the lower part of the face was broken off (purposely) and the coffins cartouches were removed. Therefore, there is nothing on the coffin that clearly shows whose mummy was placed inside. This brings us to the next mystery. 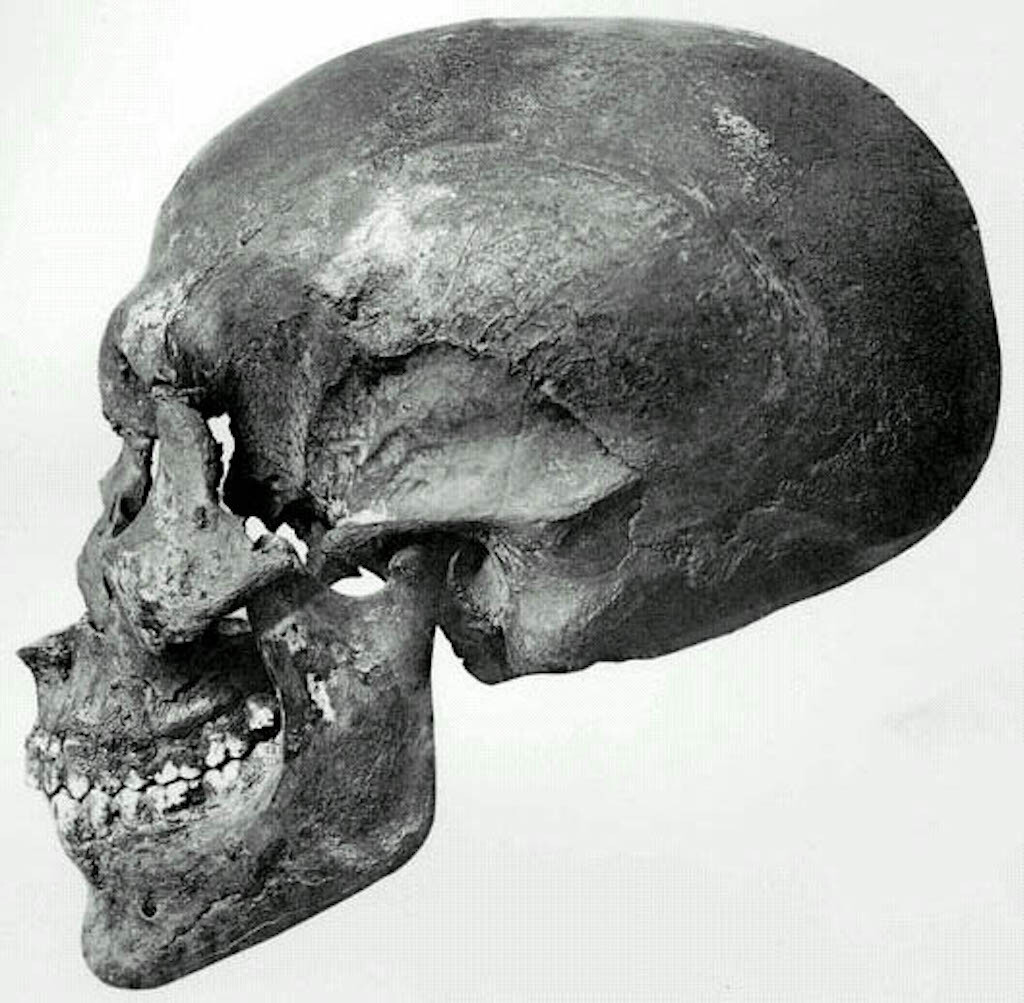 The skull of the mummy in Tomb 55. Image: Public Domain.

The mummy inside of the KV55 coffin was first thought to be that of an elderly woman. This led Davis and his team to believe that they had found the remains of Akhenaten’s mother. However, it was later concluded that the mummy (more of a skeleton) was that of a man. Davis continued to believe his first conclusion. Later, the age of the (decidedly) male mummy was put in its early twenties, possibly late teens. Later still, CT scans indicated that the person entombed in Tomb 55 may have been older than his twenties.

Blood tests, skeletal similarities, and other clues have led experts to believe that the KV55 mummy is closely related to King Tutankhamen. It is thought that Akhenaten was King Tut’s father, so that would make sense. However, if the remains belong to that of a person in their young twenties, the Heretic King must be ruled out. Interestingly, another character who may have been related to the Amarna family is thought to be a possible candidate for the Tomb 55 mummy-Smenkhkare.

Smenkhkare is a mysterious figure who was once King of Egypt. He or she may have ruled before or after King Tutankhamen and may have been Akhenaten’s successor and/or co-regent. Smenkhkare’s reign was short, 1335–1334 BCE, and not much else is known. Smenkhkare’s corpse has never been found unless it is the one in KV55. The parentage is also unknown. If it is his body in Tomb 55, he was certainly related to King Tutankhamen in some way.

None of the theories regarding the mummy in KV55 fits precisely. Queen Tiye can be ruled out, as can Kiya. Akhenaten and Smenkhkare are viable candidates. Smenkhkare has never been found and the tomb of Akhenaten in El-Amarna was found sans mummy. However, to make either of these theories fit, you have to select what evidence to go off. Unfortunately, it appears as if the identity of the KV55 mummy will remain a mystery unless the mummies of some of the candidates are found elsewhere.

Bog Bodies of Europe: Most Famous of the...

Parthenon: Optical Illusions and Other Mysteries