Bouvet Island Is The Most Remote Island in the World

Bouvet Island is the most isolated uninhabited place on Earth. Imagine a place that is nearly covered in ice and surrounded by the coldest ocean in the world and you would have a good idea of what it is like. It is not Antarctica, but Antarctica is the closest piece of land to the island. The island is situated between the tip of Africa and the coldest continent on Earth. It is not the sort of place where it is likely you would find yourself shipwrecked. It is hard for even people who know where it is to find it. How is then that an expedition discovered an abandoned lifeboat on Bouvet Island? 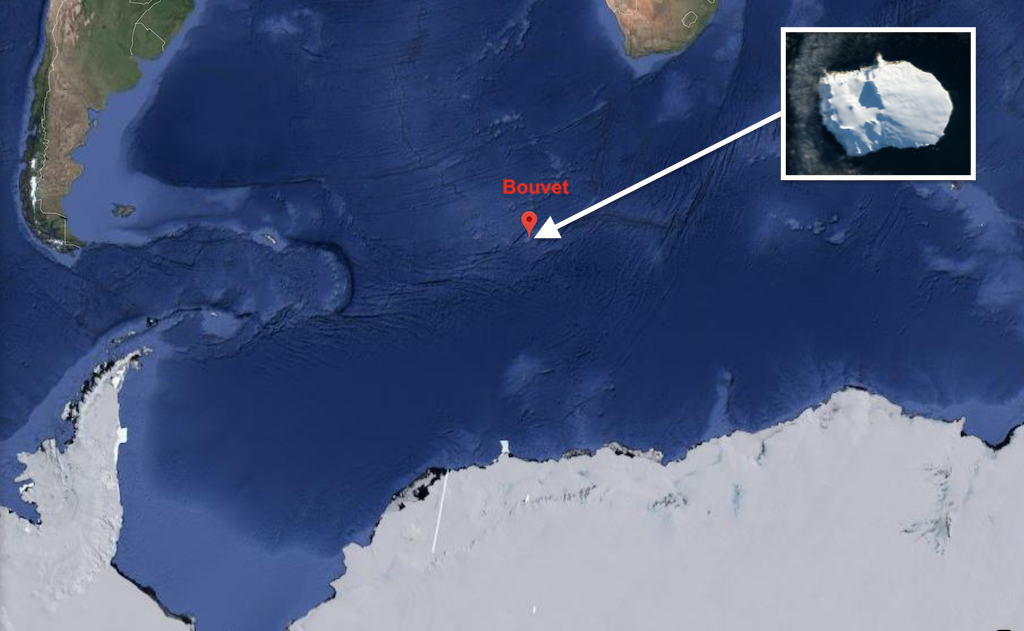 Only the most adventurous travelers visit Bouvet Island and only a very unfortunate soul would wind up there in a lifeboat unless it was a landing craft. Most modern expeditions onto the island are made by helicopter because landing a boat on on this island is difficult under the best conditions and impossible under average conditions. It is 90% covered in glaciers, under which is an active volcano. The sides of the island are almost all sheer, icy cliffs.

Because of its location, weather researchers have long thought it a great place to put a weather tower. On 2 April 1964, the Royal Navy’s Antarctic ice vessel HMS Protector was sent to the island to investigate a new area of the land created by lava flow ten years prior to the expedition. Lieutenant Commander Allan Crawford and his team landed via helicopter and began checking out the landscape. There, Crawford saw a lagoon with a very strange feature — an abandoned lifeboat.

Crawford later reported that the abandoned lifeboat on Bouvet Island had no markings on it that would suggest its origins. It also had no motor and no sails. He found the oars on shore, along with a flattened copper tank and a barrel. He was unable to do a thorough search of the area, given the harsh nature of the terrain and the work he had come to do, but what he was able to search of the landscape turned up nothing else. There was no evidence that people had stayed on the island or died on the island. There was nothing.

A photo of the abandoned lifeboat at Bouvet Island made by the helicopter pilot from the HMS Protector. Image: allkindsofhistory.

Two years after Crawford’s Bouvet Island expedition, another expedition did a survey of the area around the lagoon. They described the lagoon but made no mention of a lifeboat, so it must have disappeared by then. But where could it have gone? It is unlikely that another expedition would have retrieved it, as dragging an extra boat back into the water or bringing a lifeboat onto a helicopter are far-fetched scenarios. There is the possibility that it sank into the lagoon. However, without knowing how deep the lagoon is, it is hard to say. All we do know is that the lifeboat found on Bouvet Island disappeared.

Who Left the Lifeboat?

As for the origins of the lifeboat, no one has come forward to say it was theirs. It could have been left by an expedition. However, the lagoon was no more than ten years old. There is only a small space of time during which the lifeboat could have appeared. Research into who visited Bouvet Island during that ten-year span has turned up nothing about an abandoned boat.

The Franklin Expedition: An Incredible Story of Loss and Rediscovery

It seems unlikely that the lifeboat came from a shipwreck since no missing vessels were reported that could explain the lifeboat. Visibility is extremely poor, as well. Then, there is also the question of why the boat was left there at all. Did someone from a failed expedition die there? If so, why did he not use his boat for shelter? Why did he not camp near the lagoon? Did he camp, but have the traces of his stay later wiped out by the weather? There were many unanswerable questions regarding the mysterious lifeboat of Bouvet Island.

A post by qualis-libet on Reddit appears to have solved this mystery.  Qualis-Libet referenced page 129 of Transactions of the Oceanographical Institute (Moscow, 1960). A summary of that page states:

The scientific reconnaissance vessel “Slava-9” began its regular 13th cruise with the “Slava” Antarctic whaling fleet on 22 October 1958. On 27 November it arrived at Bouvet Island. A group of sailors landed… – and then –  …couldn’t leave the island in time because of worsening weather conditions and stayed on the island for about three days. The people were withdrawn by helicopter on 29 November 1958.

The Reddit post has a reference to another article that provided some additional information on this event. Apparently there were ten scientists and crewmembers on the raft that landed on the island. When the weather worsened, they bunkered down in the general vicinity of where Lieutenant Commander Allan Crawford found the lifeboat in 1964.

Luckily, nobody perished and the mystery was solved.

This article was updated by Historic Mysteries staff on 20 January 2020.