The People of Exeter Feared the Mercy Brown Vampire

She apparently wouldn’t stay dead. The Mercy Brown vampire was roaming the streets and taking lives.

In these enlightened times, vampires are relegated to literature and folklore. This was not always so. As recent as the 19th century, many Americans believed that there were undead humans that walked among us and fed on the blood of the living. 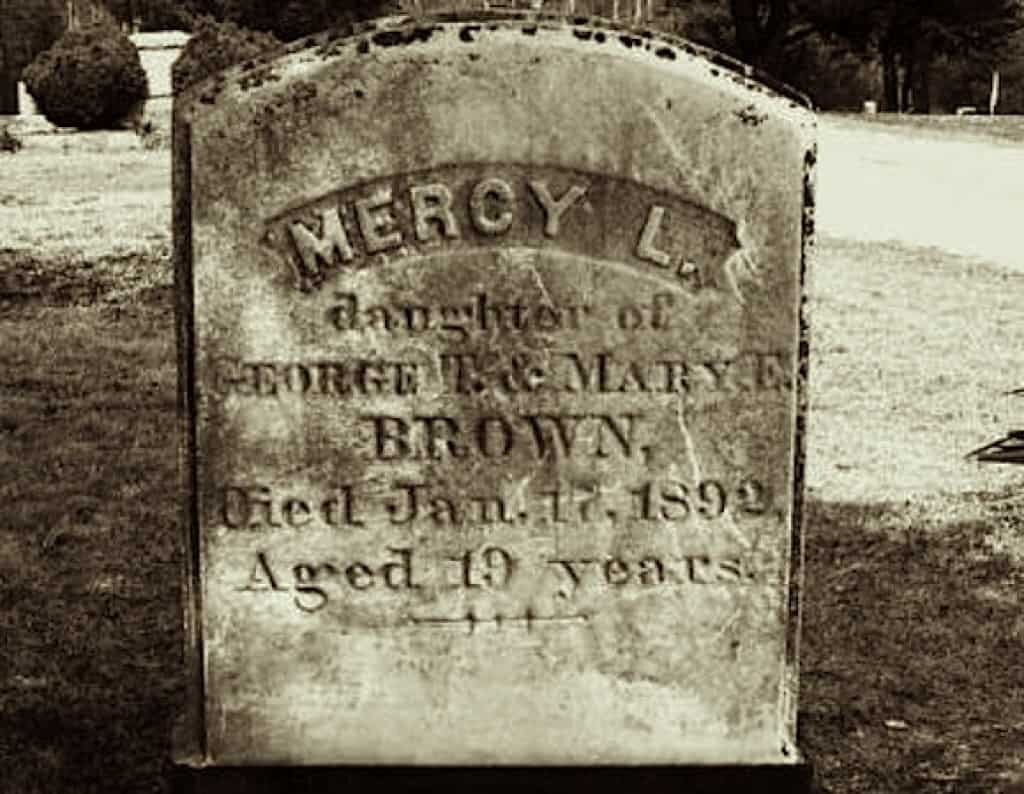 Mercy Brown’s gravestone in the cemetery of the Baptist Church in Exeter.

Arguably one of the main culprits for these beliefs was Tuberculosis (aka TB), an illness that was usually fatal to victims in the 19th century. One common symptom was a significant weight loss, giving the impression that life was being slowly sucked out of the patient. Very little medically accurate information was known about the disease.

In Exeter, Rhode Island, in the 1890s, one family would become infamous for being the focus of a true vampire hunt. George and Mary Brown had settled into the Exeter area with their children. There is no reason to suspect they were anything but a normal family of that era.

In the 1880s, Mary fell ill with TB, then known as Consumption, and quickly died. The eldest daughter Mary Olive died from the same disease in 1888. Tragically, the son Edwin became ill in 1890 but did not die immediately.

In the meantime, another daughter, Mercy, contracted the disease and died in January of 1892.

Three deaths (and Edwin ill) seemed to be more than mere coincidence to the villagers. After much discussion, it was decided in March to exhume the three Brown family members who had died and see if one of them was responsible for the ill fate of the family.

Mary and Mary Olive had both been buried and so a group of men armed with shovels dug tirelessly through the frozen earth and brought their coffins up to ground level. The caskets were opened to reveal that the bodies had decayed over time.

Mercy’s body had not been buried due to the cold weather of the Rhode Island winter. As with other people who died during the freezing temperatures, Mercy’s coffin was stored above ground with the intention of being buried once the ground had thawed.

Opening Mercy’s coffin, the onlookers were shocked to see that Mercy’s body was in pristine condition. And some sources say her body was not in the position it had been buried and that her fingernails and hair had grown significantly. There was no decay. Upon further examination, liquid blood was found in her heart and other areas of her body. It was quickly concluded that Mercy was a vampire and that she was the culprit of Edwin’s lingering disease.

At this point, many of the villagers had heard of the Mercy Brown vampire. They claimed to have seen Mercy walking through the graveyard and neighboring fields at night. Why they hadn’t mentioned this earlier is unknown.

George Brown had his daughter’s body removed from the casket and a physician removed her heart, which was then burned to ashes. Following a belief of the time, the ashes were then fed to Edwin. This “cure” was baseless and Edwin died several months later.

Why They Thought Mercy Was a Vampire

Modern science, looking back on the episode, has postulated that Mercy’s remains being above ground in the freezing winter temperatures could account for the lack of decay. It would be the equivalent of keeping her corpse in a freezer. This wouldn’t explain the movement of the body or the hair and nail growth, but these may be pieces of folklore added to the story later.

As the 20th century dawned, and especially after TB was better understood, the link between the disease and vampirism dissipated.

They eventually buried Mercy in a local cemetery, sans her heart. Many curious tourists go to her cemetery even today in remembrance of the Mercy Brown vampire story.

Other Related Articles:
The History of Dracula