What happened to the Roanoke colony?

The Roanoke Colony was the first English settlement in America. It vanished. The mystery of the lost colony of Roanoke Island has baffled society for hundreds of years. A group of settlers disappeared into North America with hardly a trace and no one has seen concrete evidence of their existence in centuries. Many theories have arisen over the years as to the fate of these settlers, but nothing is certain. Today, there is only speculation about the Roanoke Colony mystery.

Establishment of a Colony

After hearing news of a lush, beautiful area in the Americas Queen Elizabeth I, of England, decides to name this new place Virginia. Subsequently, she gives Sir Walter Raleigh permission to establish a colony in the area. He was to finance and plan the expedition to what is now North Carolina. Raleigh has 10 years to complete this mission. 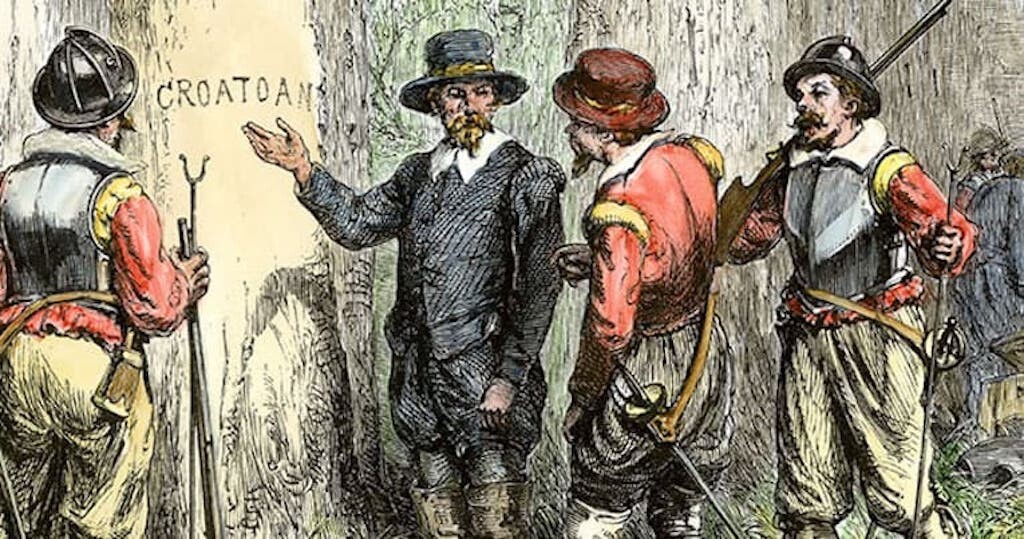 In 1585, an expedition comprised only of around 77 men were sent to start the colony. They were led by Sir Richard Grenville. Shortly after the arrival, the men begin to suspect that local Indians have stolen a silver cup from them. In retaliation, they destroy their village and burn the chief alive. Despite the obvious discourse with the natives, Grenville decides to leave the men there to build the proposed colony. He vows to return in April of 1586.

When April passes and there is no sign of Grenville the men decide to hitch a ride home with Sir Francis Drake. Drake had stopped at the colony on his way back from a successful voyage to the Caribbean. Ironically Grenville arrived shortly thereafter. After finding the settlement empty, he decides to leave 15 men there to protect England’s claim.

John White and the Roanoke Settlement

The second group of settlers arrived at Roanoke Island on July 22, 1587. This group contains 117 people, both men and women. They are led by John White. John White’s daughter would give birth to the first English child born in America on August 18, 1587. The child’s name was Virginia Dare. These people would later become known as the Lost Colony of Roanoke Island.

The settlers built their colony and tried to make peace with the natives. They were successful in befriending the Croatoan tribe, but other tribes were openly hostile toward the colonists. A settler by the name of George Howe was murdered by natives while hunting crab on the beach. After this incident, the settlers became nervous about their new home and convinced John White to return to England and ask for help. John White reluctantly left. He would never see any of these people again.

When John White arrived in England, he was unable to secure passage back to the colony. He was unable to find a Captain that would sail the Atlantic in the dead of winter, so he was forced to wait. Then the opposing threat of the Spanish Armada forced all available ships to be called to war. Eventually, John was able to secure passage on two small boats. Unfortunately, the owners of these boats were greedy men and they tried to capture other ships during their voyage. They were then captured, in turn, and relieved of their cargo. John White was unable to attempt another crossing for three years.

Nothing Left To Return To

John White finally returned to Roanoke Island on August 18, 1590. His granddaughter’s third birthday. To his dismay, there was no sign of his friends and family. The Roanoke colony had been dismantled and deserted. The only clues to the whereabouts of the colonists were carvings in a remaining post and a tree. The carving on the post read “Croatoan” and the carving in the tree was even more cryptic, it simply said “Cro.”

John took these clues to mean that the Roanoke colony had moved to nearby “Croatoan Island.” Before White’s departure, they had agreed that if the settlers were forced to leave they would carve a Maltese cross into a tree. In the absence of such a carving, John could only assume that they left of their own volition. John was compelled to search for the colonists but was forced to return to England due to inclement weather. He would never set foot on Roanoke Island again.

There are many theories concerning the Roanoke colony mystery. They could have left due to weather, food shortage or threat of attack by local tribes. One thing is for sure, nothing is certain. Future settlers and explorers would claim to have spotted natives with light hair and eyes or natives that spoke perfect English. These claims may explain where the settlers went. It is highly likely that they integrated into the Croatoan tribe, but there is no concrete evidence of this.

A Roman Legion in China