Marilyn Monroe is an American icon who was known for her movies, modeling, dubious love life, and frequently imitated good looks. She is perhaps the most famous Hollywood sex symbol of all time. Adding to her allure in another way is the manner of her death. It is steeped in drug addiction, depression, suicide attempts, high profile affairs, and obvious cover-ups.

To delve into the particulars of Marilyn Monroe’s life, we would need to pen a book. Even her death is book-worthy, as evidenced by the slew of books on the topic. Here, we will try to focus on key details, particularly those that made her death something of a mystery. There will be some conjecture from contemporaries, but later conjecture will be left out, given that many modern accounts and theories are sensationalized or based purely on circumstance. In other words, just because she might have slept with someone, according to gossip columns, does not mean that someone killed her. More on that later. 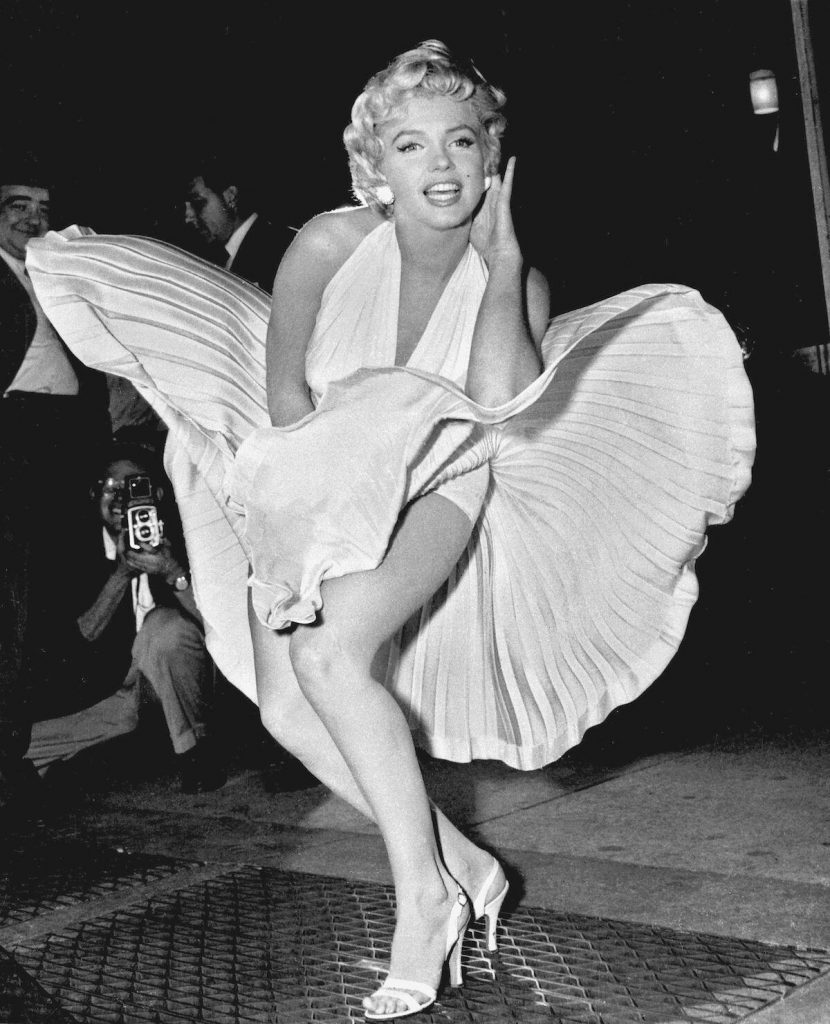 Photo of Marilyn Monroe while filming The Seven Year Itch on the streets of New York.

The death of Marilyn Monroe occurred sometime in the late night of August 4 or the early morning of August 5, 1962. The cause of death was “acute barbiturate poisoning” (overdose) and was ruled a “possible suicide.” Accidental suicide cannot be ruled out, given the reason for her death and the fact that she had overdosed numerous times before. In fact, she had been resuscitated after overdosing on several occasions.

There is much debate over the time of death. We know that Marilyn was on the phone at least from 7:00 p.m. to about 7:45 p.m. on the night of August 4, with an interval of 15 minutes between two phone calls. She spoke with her stepson, Joe DiMaggio, Jr., and with actor Peter Lawford. Several other people claim to have spoken with her, but Peter was adamant that she ended the phone call on a weird note and that her phone was busy from then on that night. Joe said she sounded chipper. Peter said the opposite.

After Lawford spoke to Monroe, he made a few phone calls to establish whether she was okay. Her lawyer — Mickey Rudin — instructed him to stay away from the house in case she was using drugs. Lawford contacted the maid on another line and asked her to check on Marilyn. She said that she did and Marilyn was fine. At around 12:00 a.m., by the maid’s initial testimony, she finally became worried and the bedroom door was locked (there was no working lock on the door), so she called Marilyn’s psychiatrist Ralph Greenson. Again, according to their initial testimony, he found her body by breaking in through her outside doors a little later.

Worth noting is that Marilyn Monroe’s agent Arthur P. Jacobs got a phone call from Rudin around 10:00 p.m., according to Jacobs’ future wife. She said that he was informed by Rudin that Marilyn died of an overdose. This is long before the maid and the psychiatrist claim she died, even according to their later testimony and that of doctors.

The police were not called until 4:30 a.m. Some witnesses say Marilyn left in an ambulance earlier and came back. Other witnesses, including neighbors, say none other than Bobby Kennedy arrived at her house in the evening with two unidentified men. The only thing we know for sure is that police were not called to the scene until early morning. Once there, they say they found several strange details. Firstly, the bed was clean, which does not line up with overdose. The maid was washing laundry. There was no cup in the room, despite the fact that Marilyn was known to have difficulty swallowing pills. A cup showed up later on the floor, but police insist it was not there initially.

The pathology findings indicated that Marilyn Monroe had not orally taken the medicine that killed her and that it was not injected, either. There is a possibility that she took the medication orally throughout the day, which would have made the intestinal evidence hard to read. However, she took enough to kill 10 people. She would have been dead long before that time if she had ingested it slowly. That leaves us with an enema of one or both of the medications that killed her. It seems doubtful that she would have administered it herself. Therefore, if that was the case, someone helped her with her medication. It is entirely plausible that whoever did it kept quiet about it for fear of murder charges. Of course, there is also the possibility that it was murder, as conspiracy theorists would have you believe.

It is very possible that Marilyn’s friends waited until she was cleaned up before calling the police to spare their deceased friend’s dignity. Public relations were a major deal in Hollywood in those days and Marilyn was a public relations sideshow. She was sleeping with everyone and their brother, according to gossips. She was chasing the president like a hussy — the Happy Birthday, Mr. President performance only months earlier had not helped that rumor.

Is it possible that Marilyn died far earlier than the maid and the psychiatrist would admit? That would explain how Rudin seemed to know before anyone else. This brings us back to Rudin. He called Lawford at 1:00 in the morning to tell him Monroe was dead. Why did he wait so long if he knew at 10:00 when he called her agent? The real mystery here seems to be Rudin’s apparent psychic abilities and the pick-a-number act doctors, the maid, and the psychiatrist played with the timeline. These mysteries cannot be solved with the available evidence.

Much of the evidence, including phone records and police reports, has been lost or stolen. Some say the FBI files in the vault on the actress indicated that the FBI encouraged her to kill herself to stop her from speaking about her affair with Robert Kennedy, though it is a rough interpretation of the somewhat illegible files. Witness testimony changed and “expert” opinion changed throughout the years following her death and even until now.