The Mad Gasser of Mattoon, Illinois

Did The Mad Gasser of Mattoon Really Exist?

The Mad Gasser of Mattoon, also known as the Phantom Anesthetist or Anesthetic Prowler, was the supposed perpetrator of a series of alleged gas attacks targeting the residents of Mattoon, Illinois. The incidents began on August 31, 1944, and lasted two weeks. In total, about 35 individuals believed they were victims, as they suffered symptoms in their own homes. The identity of the Mad Gasser and whether or not the gassings ever really occurred are still a mystery. 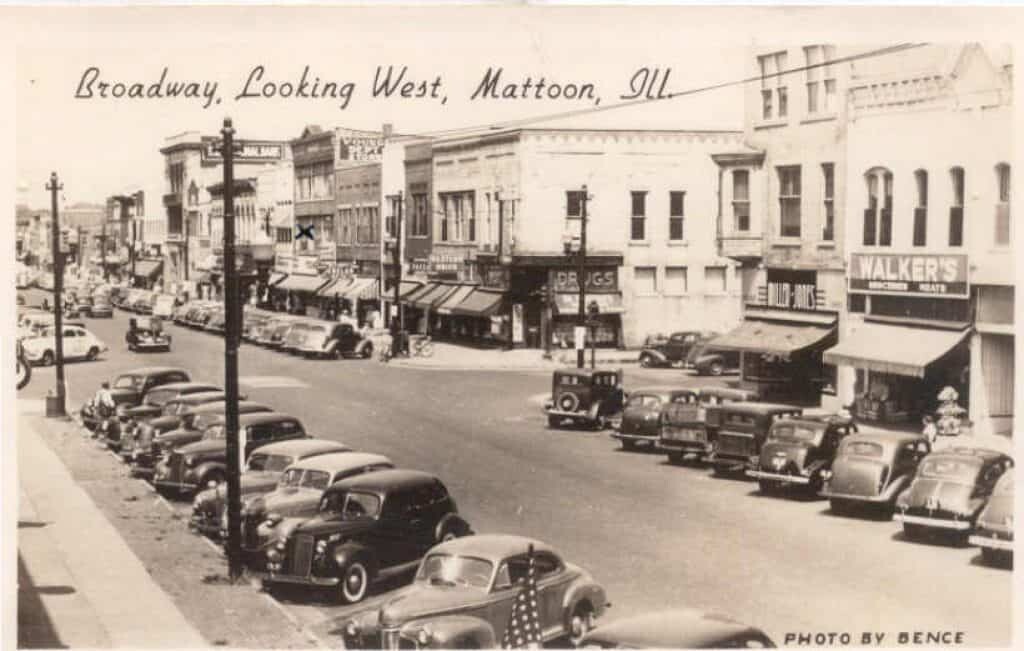 A photograph of Mattoon, Illinois, circa 1940.

The Start of the Gas Attacks

On Thursday, August 31, Urban Reef awoke to a strange smell in his bedroom that soon became so overpowering that he became physically ill. He woke his wife, and she wondered if there might be a problem with the pilot light in the kitchen. She decided to get up and check, but she found that her legs wouldn’t move. Thankfully, these symptoms went away in a short time. The pilot light, she found, was working perfectly. 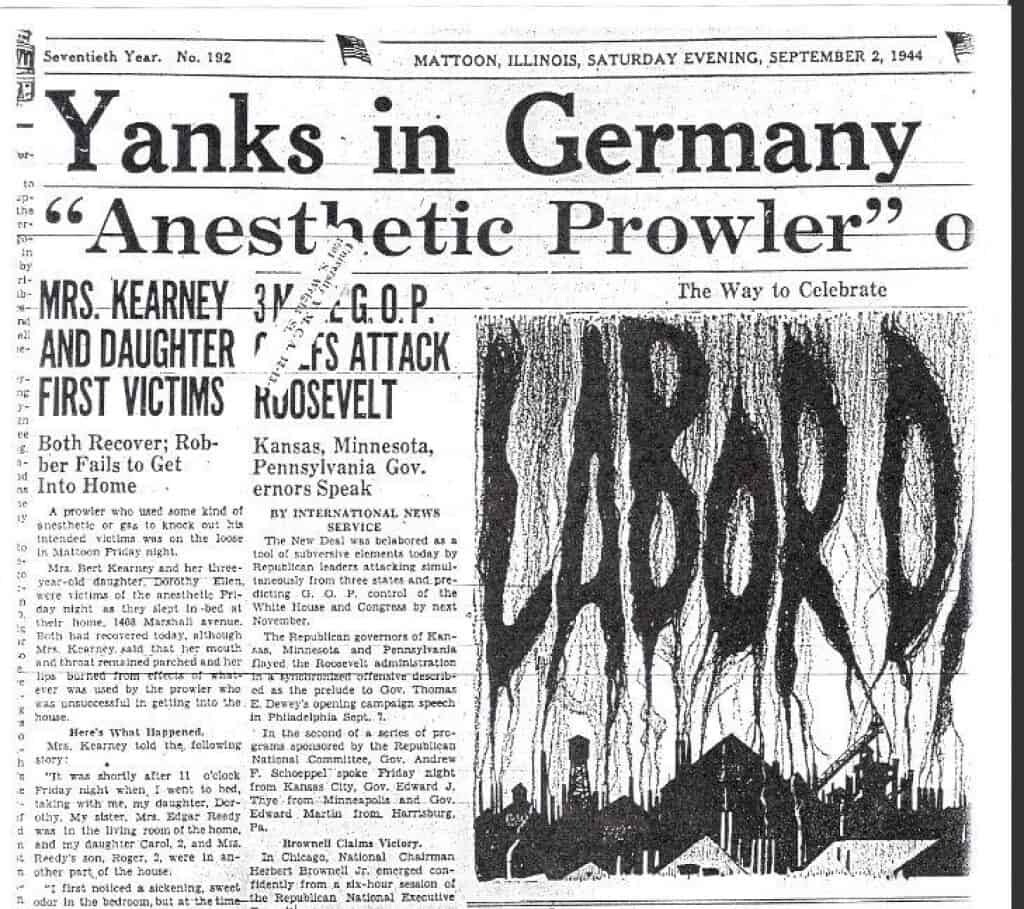 Nearby, on September 1, three separate households reported similar symptoms. In one family, the mother went to check on her daughter but found that she, too, was paralyzed from the waist down. The mothers and children felt the effects of gas in the other two homes as well. One of the families had seen a prowler wearing a tight-fitting cap and dark clothing.

[wpsm_quote author=”Mrs. Kearny” float=”none” width=”100″]I first noticed a sicking sweet odor in the bedroom . . . the odor grew stronger and I began to feel a paralysis of my legs and lower body.[/wpsm_quote]

Although the police drafted incident reports, they found no hard evidence to point them in any direction.

Newspaper Coverage of the Mad Gasser

Early reports also came to the attention of the local newspaper. They had found a terrific story and published sensational articles on September 2 about the incidents, citing such specifics as to the smell of the gas and the explicit symptoms experienced by the victims. Their coverage of the story stated that there was some kind of madman out in the dark who was creeping around and pumping poisonous gas into people’s homes. They called this phantom, “The Anesthetic Prowler” and, subsequently, ‘The Mad Gasser.” The poison, they claimed, could have been chloroform or ether, according to the description of its smell.

Over the next few days, more and more people reported to the police and the newspaper that they had been the victim of a similar attack. They too had experienced a sickly-sweet smell and then burning sensations, nausea, and partial paralysis.

There were two reports on the 5th, and on that night, the police seemed to have caught a lucky break. A couple arrived at their home late and found on their front porch a square of white cloth. The woman reached down and put the cloth to her nose. After she smelled it, her nose and throat burned immediately.

Police investigated and found a skeleton key and tube of lipstick nearby. At that point, everyone wondered if the couple may have interrupted the Mad Gasser in the middle of an attack. However, when investigators analyzed the white cloth, they claimed that it was free of any odor. Also, the skeleton key and lipstick tube provided nothing substantial.

Seven more incidents took place on the 6th, during which time a homeowner saw a tall thin man running from their yard. On the 7th, the Smiths suffered their second attack and heard some kind of buzzing sound and saw a thin blue vaporous substance. Then through September 10, six more attacks occurred. 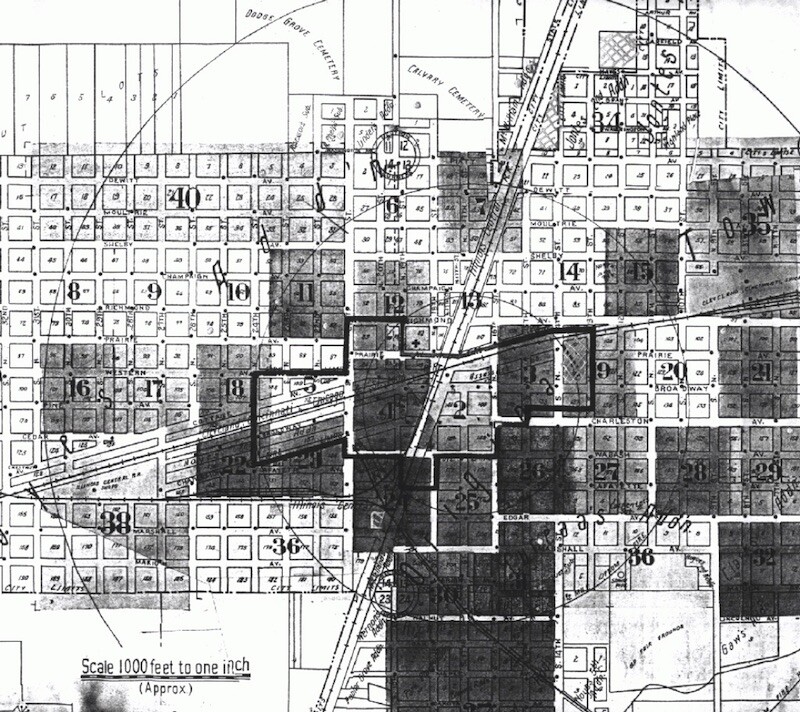 Throughout early September, roughly 35 people had suffered symptoms of sickness, paralysis, difficulty breathing, dry mouth, lightheadedness, and a burning sensation. The police would answer each call but came no closer to solving the case. Frustrating clues that went nowhere included cut window screens, opened windows, and unfamiliar female footprints outside some of the houses.

The panic escalated. Mattoon residents felt that law enforcement was not acting quickly enough. They set up armed patrol groups, which the police strongly urged them to disband. By this time, the FBI was brought in but even they could not come to a concrete decision about what was happening in Mattoon.

The police were stumped. They said they had no motive. No robberies, physical assaults, or kidnappings occurred.

An Explanation by the Police

On September 12, the police announced their investigation findings. They believed there had been no actual attacks and that the entire series of “crimes” was due to mass hysteria fueled by the initial reports in the local newspaper. They suggested that any form of gas going into a citizen’s home was due to accidental chemical emissions from Atlas Imperial Diesel Engine Company Plant.

This explanation seemed to satisfy some. However, it would not explain the white cloth, skeleton key, and lipstick tube of that one incident. Although, one could argue that these three items were not necessarily linked to a Mad Gasser gas attack at all.

The police “solution” also dodges an important point. Workers at the industrial facility should have felt similar symptoms if gas was escaping from the facility. There had been no such reports by facility workers. Additionally, this police conclusion does not explain the initial five attacks that occurred before the newspaper first reported the story.

Nonetheless, the police announcement seemed to have done the trick. On the 13th, the last report of an attack came in. A woman stated she saw the Mad Gasser outside her house and described a woman dressed in men’s clothing.

Skepticism of the Events

Sociologists and the like have pored over newspaper accounts and police records since 1944 and are still skeptical. Was there a woman out there in the dark with some kind of paralyzing gas? Or did the power of suggestion cause residents to experience mass hysteria after they read about it in the newspaper? Perhaps the nearby plant leaked some kind of toxic substance and then tried to cover it up. Did they leave misleading evidence around the neighborhood that pointed to some individual?

By mid-September, all events related to the Mad Gasser stopped, and Mattoon went back to its normal small-town existence.