Ball lightning is one of the most unusual sights on earth. According to J.R. McNally’s Preliminary Report, only five percent of the world’s population has ever experienced it, about the same as those who have experienced lightning strikes up close. This strange phenomenon is also known as globular or globe lightning. 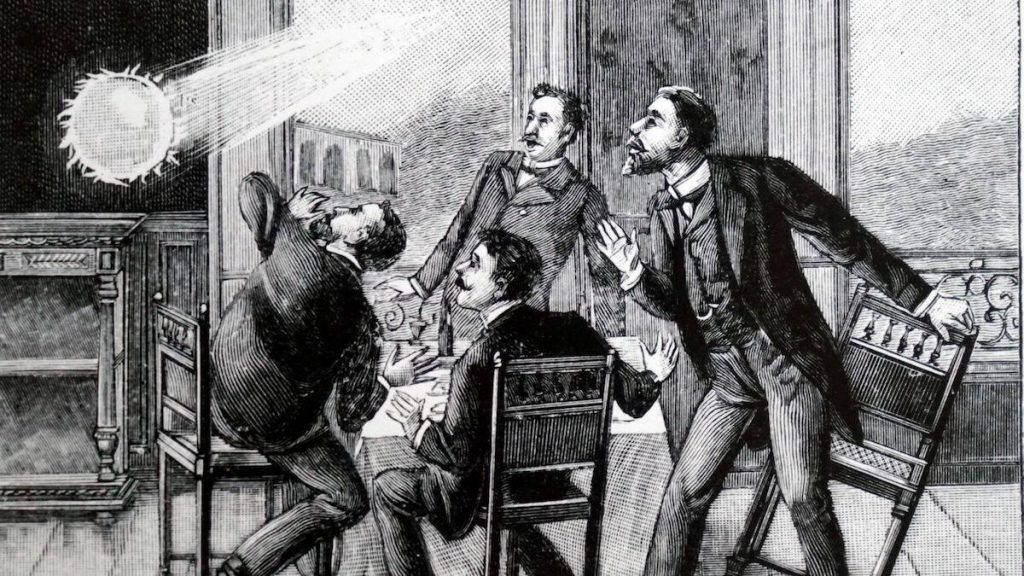 What is Ball Lightning?

Ball lightning is an extraordinary spectacle that may appear as an illuminated orb, usually with a diameter of a few centimeters. It often occurs close to the ground during thunderstorms and is also associated with cloud-to-ground lightning. The color of the bolt could be white, yellow, blue, orange, or red. A distinctive odor and hissing noise often accompany the flash. The duration is usually a few seconds. The lightning moves around and disappears suddenly, often sounding like fireworks. It may be silent and occasionally causes damage but is generally harmless.

Ball or globe lightning is a rare phenomenon experienced by only one out of every 150 people since ancient times. Here are some notable examples.

One of the earliest reports of ball lightning occurred in Widecombe-in-the-Moor, England, in October of 1638. During a violent storm, while villagers were at services in their local church, a ball of light approximately eight feet across entered the church and went wild. Windows and pews became smashed, and entire stones from the church walls fell and shattered on the floor. The ball then split into two, one escaping the church via a window and the other burning itself out inside the church.

According to Devon and Cornwall Notes & Queries of the event:

the extraordinarie lightning came into the Church so flaming, that the whole Church was presently filled with fire and smoke, the smell whereof was very loathsome, some said they saw at first a great ball of fire come in at the window and passe thorough the Church, which so much affrighted the Congregation that the most part of them fell downe into their seates, and some upon their knees, some on their faces, and some one upon another, with a great cry of burning and scalding, they all giving up themselves for dead.

Parishioners tried to flee the church, only to be hindered by thick smoke and a noxious sulfur odor. Four people died, and more than 50 injured. The villagers concluded that God sent the ball lightning to punish two fellowships who played cards during the sermon. 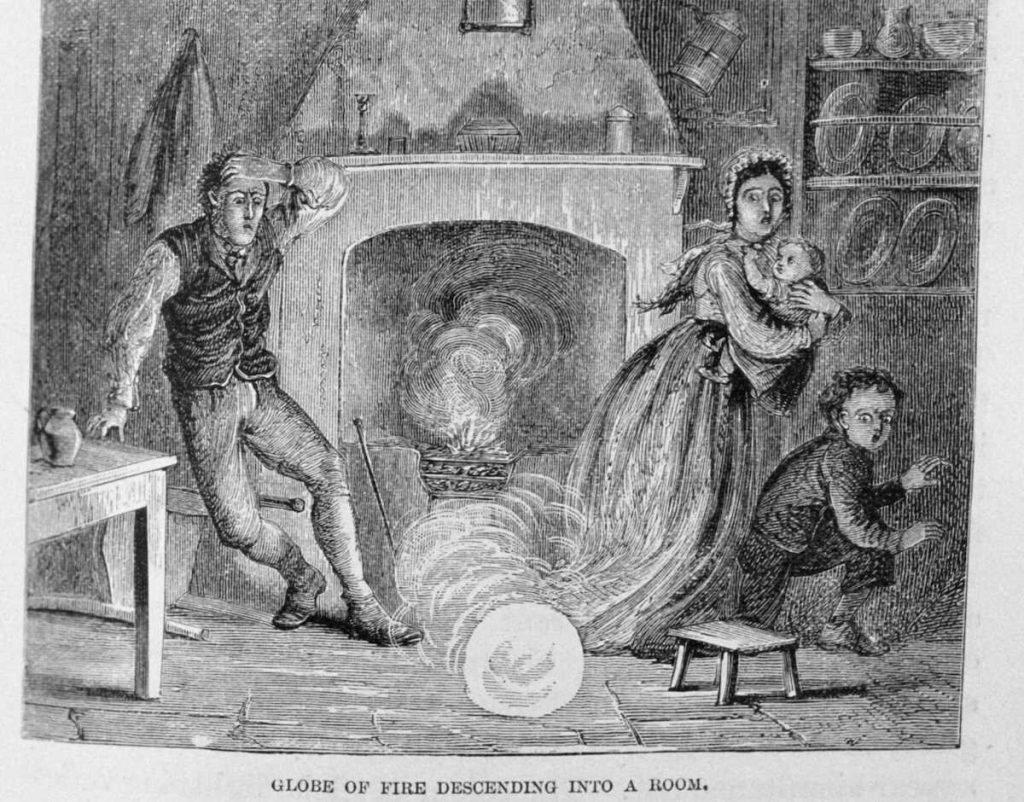 About one hundred years later, in 1726, the ship The Catherine and Mary encountered a mysterious incident of ball lightning. One of the crew recorded the event:

Georg Richmann a professor living in St. Petersburg, Russia conducted a lightning experiment similar to what Benjamin Franklin did in 1752. Richmann heard the thunder while in the presence of colleagues at the Academy of Sciences. He ran home with his engraver to capture the event. While conducting the experiment, a ball of lightning struck, killing him. Richmann’s engraver was knocked unconscious but survived the incident. Through Richmann’s research, he proved clouds contain electrical charges. 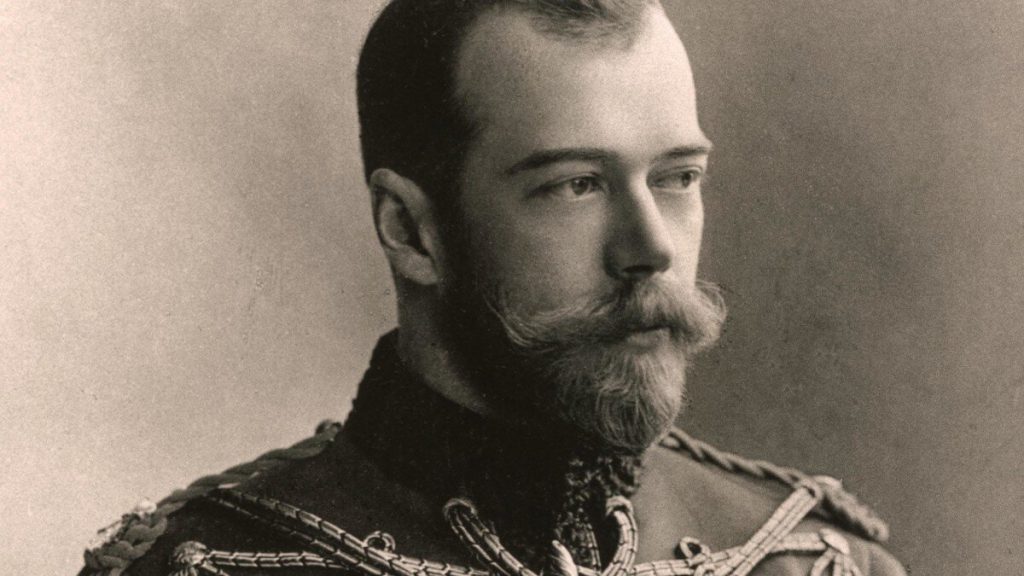 Tsar Nicholas II, the last of the Russian Czars, had a frightening experience with globular lightning as a child. He attended an all-night church vigil with his grandfather during a severe thunderstorm. The non-stop lightning and thunder shook the foundation of the church. A strong gust of wind blew out the candles in front of the icons at the altar. Then a brilliant light that looked like fire flew in through the window. The ball of light passed through the church and out a door into a nearby park.

Nicholas was terrified, but his grandfather showed no emotion. The demeanor of his grandfather calmed him, and he felt he shouldn’t have been so frightened. When he glanced at his grandfather and saw the smile on his face, he relaxed and never again had a fear of storms.

In 1809, ball lightning struck another ship, which once again left havoc in its wake. In this instance, three separate burning orbs descended upon the vessel. The mast caught on fire, and two crew members died. Once again, the smell of sulfur filled the air.

R.C. Jennison from Kent University’s Electronics Laboratory had his own experience with globe lightning on March 19th, 1963. Nature Magazine published his account in 1969. He was traveling from New York to Washington on Eastern Airlines and seated near the front of the plane. During the trip, the aircraft flew into a strong thunderstorm. A few minutes into the storm, the passengers became astounded by a very loud and brilliant sphere that appeared at the entrance to the cockpit. The glowing orb flew down the aisle of the plane while maintaining the same height and speed until it disappeared.

More recent incidents are just as unexplainable. Episodes in the 20th century seem randomly positioned throughout the globe. Ball lightning reports have come in from Uppsala, Sweden, Cape Naturaliste, Australia, and even a July 2011 incident in Liberec of the Czech Republic.

Overall, there are more differences than similarities between incidents. Eyewitness reports claim the orbs hovered in the air, others state the ball is in constant motion. Many reports say the balls entered via a window or door and then left through a different entryway. Others burst through walls. Ships seem to be visited by the fiery orbs frequently. The balls seem to strike during storms but sometimes appear during fine weather. Some claim the balls just grow dim and vanish, and others noted explosions when the orb disappeared.

Experiments in some of the world’s leading universities, including the University of Canterbury in New Zealand, the Russian Academy of Sciences, and Kent University, have been conducted to duplicate the mysterious orbs of light.

The causes of this Richmann isn’t known. However, there are several theories. One explanation is that magnetic fields occurring during thunderstorms cause ball lightning. During a storm in 2012, spectrometers and video cameras caught a luminous orb that appeared right after lightning struck. The orb traveled a distance of approximately 33 feet. The spectrometer detected calcium, iron, and silicon in the ball of light, all present in the soil in that area.

Lightning is an electrical discharge and, under certain circumstances, can form an orb or ball that can travel rapidly through the air or even into buildings. Scientist Vladimir Torchigin from the Russian Academy of Sciences contends the phenomenon isn’t lightning but a bubble of light that becomes trapped inside a sphere of air. Particles can be absorbed and emit electromagnetic radiation during a storm. These molecules move in such a way that they trap photons in a sphere of pressurized air.

According to Torchigin’s research, the light within a pressurized sphere is a billion times more potent than light that moves consistently in a straight line. Torchigin concludes that the phenomenon and a light bubble are the same. Whether or not he’s solved the mystery remains to be seen.

Some of the more far fetched theories about this rare form of lightning include the presence of aliens and mini black holes created during the big bang.

The most likely explanation for the unusual spheres of fiery light is that silicon in the soil combines with carbon and oxygen during a lightning strike. The oxygen and carbon form silicon vapor that cools and creates a cloud of fine dust. In a lightning strike, the electrical charge from the lightning attracts the particles to each other and forms them into a ball of light.

According to the Physical Review Letters titled “Production of Ball-Lightning-Like Luminous Balls by Electrical Discharges in Silicon,” dated January 26th, 2007:

This article was updated by Historic Mysteries staff on 21 August 2020. Additional contribution by Doug MacGowan.