Over the centuries, the stories of two women named Brigid (or Brigit or Bride or Brighid) have become intertwined in an intricate Celtic knot of myth and miracle. The Celtic Goddess Brigid and the Catholic Saint Brigid of Kildare both personified similar spiritual practices of their times in Ireland. Many scholars believe that the two are the same mythological person. The saint was necessary to mollify the native Irish population while not falling within the realm of worship of Pagan gods and goddesses. The transition from goddess to saint allowed Brigid to survive throughout the Christianizing world. At this time, the worship of a pantheon of gods – and any religious or spiritual belief system that existed outside of Christianity – was no longer acceptable in Europe. 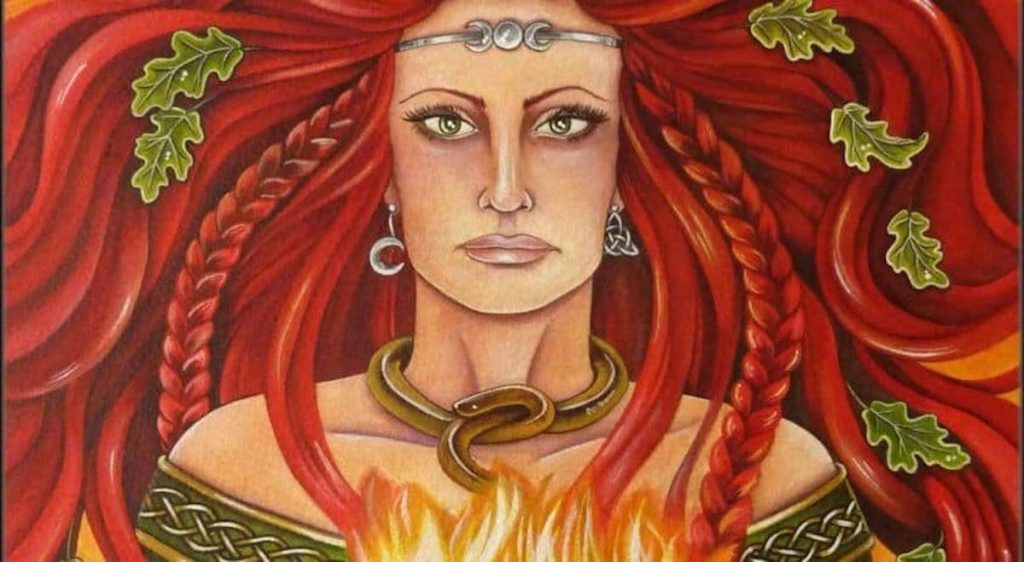 The Celtic Goddess Brigid was born in the Tuatha Dé Danann tribe of gods and embodied the element of fire. Source: Pinterest.

The Celtic goddess Brigid is one of the most venerated deities in the Pagan Irish pantheon. The name Brigid means exalted one, while her most ancient Gaelic name, Breo-Saighead, means fiery power or fiery arrow. As a solar goddess, she embodies the element of fire and is commonly depicted with rays of light or fire emanating from her head. Irish mythology relates that she was born at sunrise of Dagda, the earth god, and Boann, the goddess of fertility. They belonged to an ancient tribe of gods, called Tuatha Dé Danann (people of the Goddess Danu), who practiced magic. After they lost their mysterious islands in the west, they traveled to Ireland in the misty clouds and settled there.

When Brigid was born she had flames shooting out from her head, and through them, she was united with the cosmos. As a baby, Brigid drank the milk of a sacred cow that came from the spirit world.

Worshippers sometimes call Brigid the “Triple Goddess” for her fires of the hearth, inspiration, and the forge. She is a powerful being and through her fires, she is the patroness of healing arts, fertility, poetry, music, prophecy, agriculture, and smithcraft. Many people also call her the Goddess of the Well, as she also has ties to the element of water. The well is sacred because it stems from the womb of the earth, and Brigid is also Mother Earth or the Mother Goddess. Her association with the sacred cow reflects the Celtic reliance on the animal for sustenance; milk was an important theme throughout the year, especially during the cold winter months when hardship threatened. 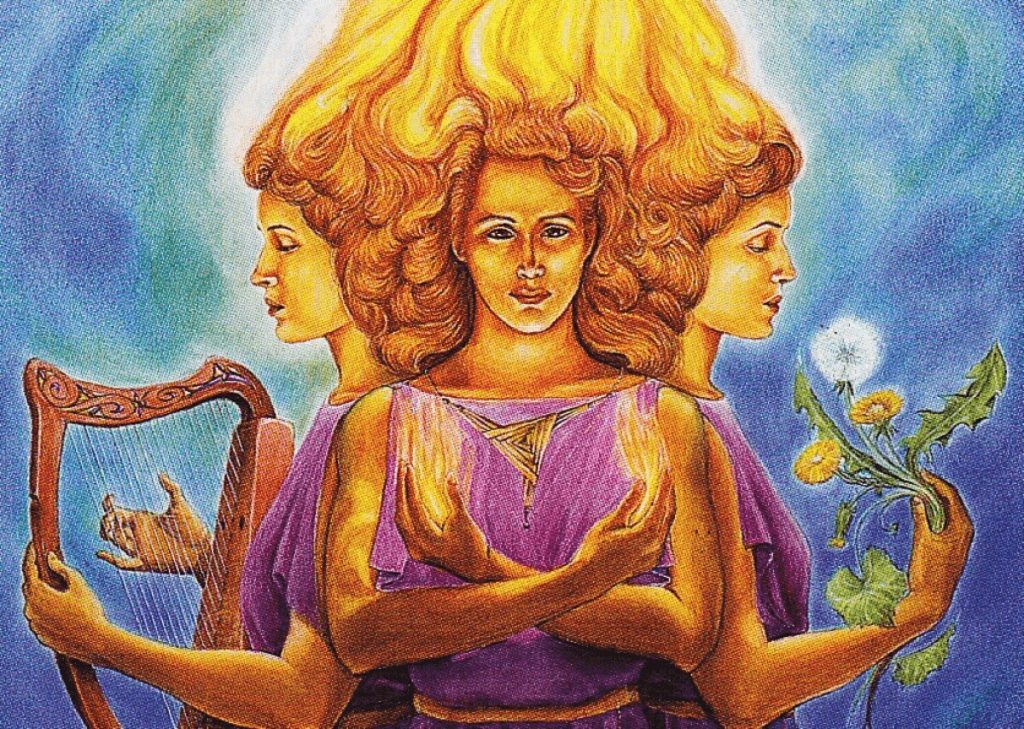 Brigid is a Triple Goddess for her fires of inspiration, hearth, and the forge. Source: Espressocomsaudade.

Worship of the Celtic goddess Brigid was widespread among Celts of Ireland, the highlands and islands of Scotland, and also of Western Europe. Amongst the warring clans, Brigid was a unifying theme and common bond. However, in the 5th century, the goddess faced an immense wave of religious change and pressures that swept through her devotees. She had to evolve, otherwise, her followers would have to banish her from their lives.

As Christianity spread throughout the Celtic lands, many properties of the older religions were Christianized rather than eliminated. Brigid was an integral part of the lives of Celts, and the solution was to create a version of her that would fit into the Catholic religion. Hence, a new story emerged.

The Celtic Prince of Lavau and His Opulent Tomb

St. Brigid of Kildare was “born” around 450 AD to a Pagan family. Her family converted to Christianity with the help of St. Patrick, an equally important saint in Ireland. The Lord inspired Brigid as a young girl and her generosity and compassion reflected her unusual virtue. She gave everything away to the poor. So overly charitable was the young girl that her own father, Dubhthach, a chieftain of Leinster, wanted to give or sell her away because she had gifted the impoverished with many of his valued possessions.

The king recognized her holiness and gave her a plot of land where she built a church under an oak tree. It was called Kill-dara (cill dara) meaning church of the oak tree (the area is now called Kildare). Seven girls soon followed her to Kill-dara and they started a convent at the tree.

This is one of the ways Brigid sanctified the Pagan with the Christian: The oak was sacred to the druids, and in the inner sanctuary of the Church was a perpetual flame, another religious symbol of the druid faith, as well as the Christian. Gerald of Wales (13th century) noted that the fire was perpetually maintained by 20 nuns of her community. This continued until 1220 when it was extinguished. Gerald noted that the fire was surrounded by a circle of bushes, which no man was allowed to enter.

Female worshippers tended to Brigid’s sacred fire for many hundreds of years. Other sources indicate that 19 maidens rotated over 19 days to keep the fire lit, and then on the 20th day, Goddess Brigid tended the fire herself. 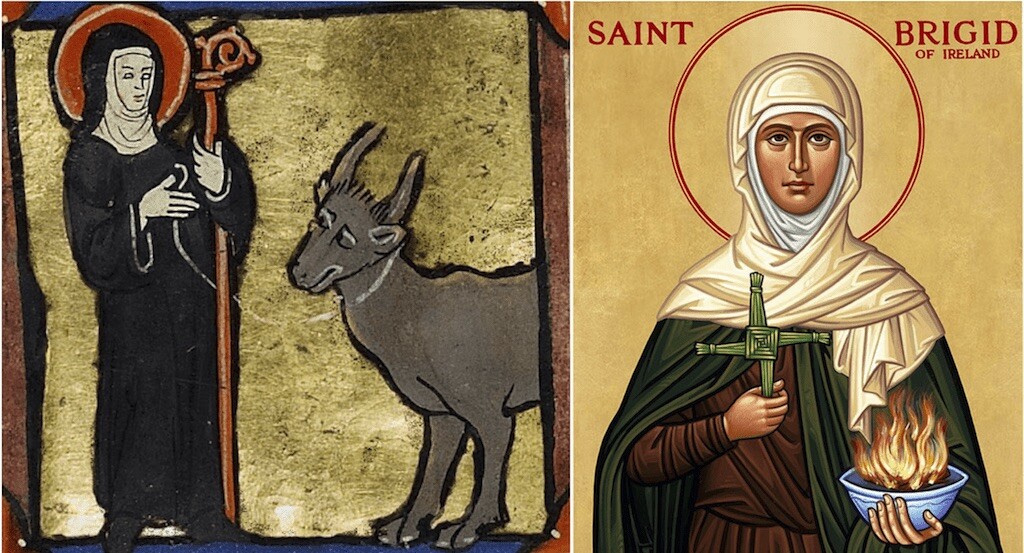 Celtic Goddess Brigid symbols of the cow, fire, and reed cross, all of which transferred to St. Brigid.

The Legends of St. Brigid

According to the same story, St. Brigid of Kildare had many mystical powers, performed many miracles, and healed innumerous sick people. Thus, the colorful tales about the goddess-saint quickly spread to other lands. Her popularity grew in Celtic devotions to the point where she became closely associated with the Virgin Mary and Jesus. In fact, other names for her was “Mary of the Gaels” and “Foster Mother of Jesus,” and myths placed her centuries earlier than her “known” 5th-century life. Those myths described her as the midwife attending Mary or as the wife or daughter of the innkeeper who had no room for Mary and Joseph.

The story of Saint Brigid tells us that she passed away in the year 523.

The Celebration of the Goddess and Saint

The hardest evidence of a mixture of the goddess and the saint is the date of February 1st. This is the Celtic festival day of Imbolc, which was an important event that included much worship of the goddess Brigid. That same date is when the annual Saint Brigid Feast Day takes place. The Irish still celebrate this day. As part of the festivities, they make Saint Brigid’s crosses (St. Brigid) of rushes or reeds (Goddess Brigid) and put them in houses for protection and luck (both). The cross, one of Brigid’s most important symbols, looks very much like the swastika motif, which ancient proto-Germanic people used as a symbol of life, fortune, and blessingsResurgence of Paganism

Hundreds of years passed since the Celtic goddess Brigid converted to sainthood. And yet, her worshippers had maintained many of her goddess qualities. Because Ireland was separate from mainland Europe, they were able to keep some of their own culture and practices intact. Therefore, even the nature of their worship still had Pagan aspects.

Pagan Easter: Where Did The Modern Tradition Originate?

Pagan roots still exist today at many Irish wells that Christians had dedicated to St. Brigid. Those wells were originally connected with the Celtic goddess Brigid. As noted, she is also the Goddess of the Well, which is historically very sacred as the womb of Mother Earth from which flows life-giving waters. The most significant wells are those that exist near a large tree, as there is deep reverence and old mythology about world trees and wells. Even today, the wells have pre-Christian significance.

For example, worshippers mostly visit between dusk and dawn. This is the time of day when the Celts believed the veil between the worlds of the living and of spirits is thinnest. The Irish annual pilgrimage to many of Brigid’s wells falls on the first Sunday in August. This day is a pre-Christian Gaelic holiday called Lughnasadh, after the god Lugh. Lughnasadh is one of the four seasonal holidays of the ancient Celts, and celebrations abound in honor of Lugh and the fall harvest.

The Burning Flames That Endure

Brigid started as the Great Goddess, exalted and inseparable from the everyday activities of the Celts. Although the Church rewrote her story, they were never able to completely supplant the tenacious goddess. Each Brigid reflected the essential spiritual values of her era, whether Pagan or Christian. She still endures so strongly that it is now impossible to tell where the goddess ends and the saint begins.

In 1993 a group of female followers re-lit Brigid’s fire, and her spirit still burns fervently in hearts and minds, as she continues to move through time as the enduring Celtic Goddess of the flame.