Death of Julia Wallace: Did Her Husband Do It?

On the evening of 19 January 1931, a phone call came in at a popular chess club in Liverpool, England. The caller was looking for a member named William Herbert Wallace. He hadn’t arrived yet but was expected, so the man taking the call took a message. The message was from an “R. M. Qualtrough” who asked for Wallace to come by his house the following evening to discuss an insurance policy. Wallace was an insurance agent by profession. Qualtrough’s message directed Wallace to an address on Menlove Gardens East, a street Wallace was unfamiliar with.

Julia Wallace was brutally murdered in her home.

On the evening of the 20th, Wallace set out for the appointment, leaving his wife Julia at home. He headed out to Menlove Gardens West, which he knew, and presumed Menlove Gardens East must connect to it. But when he arrived he could find no such street. He wandered around, stopped to ask shopkeepers and a policeman, all of whom told him no such street existed. Puzzled, William Herbert Wallace journeyed back home.

Trying the back door a second time, he found that he could enter the house using the key. The door was no longer bolted. He turned on the lights as he made his way through the house. He eventually discovered the dead body of Julia Wallace in the sitting room. She had been bashed repeatedly by a blunt instrument.

A photo of the crime scene showing the bludgeoned body of Julia Wallace.

Shocked, he called a neighbor, who went off to summon the police.

The police arrived and found very few clues, although a poker and a metal bar kept near the gas fireplace in the sitting room were missing. The police felt these were the murder weapons and had been taken away by the killer. A small amount of money had been taken, but robbery was officially ruled out as the primary motive.

Shopkeepers and the policeman were able to verify Wallace’s futile trip on the night of the murder. But, nonetheless, the police arrested Wallace for the murder of his wife on February 22nd. 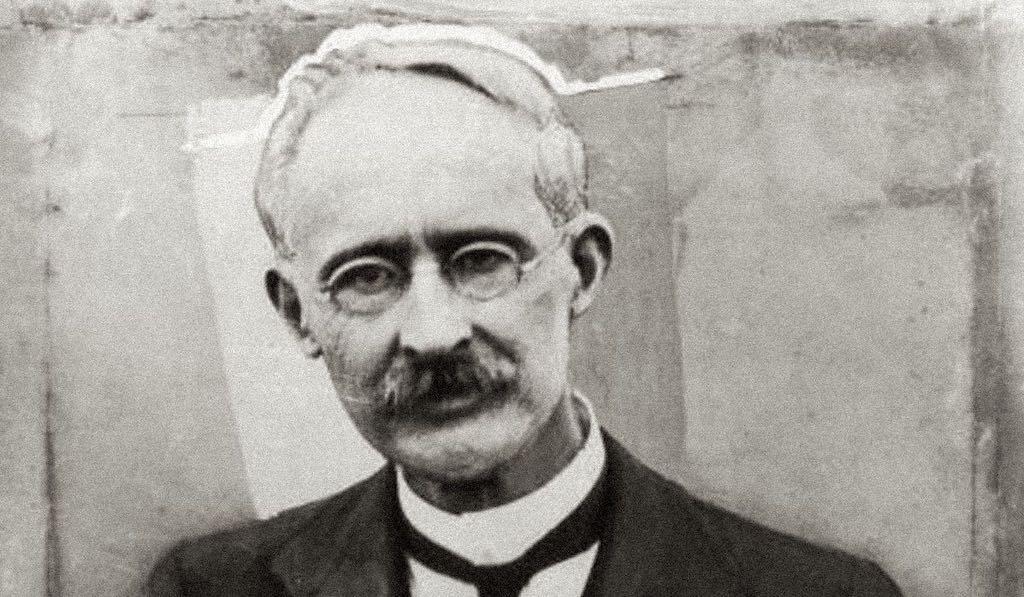 During the initial phases of the investigation, Wallace’s behavior raised a few eyebrows. During the inquiry and subsequent trial Wallace seemed detached and monotone, if not cold while detailing the events around the horrible murder of a loved one. He took the stand and failed to impress the jury. Why? As an observer of the trial, crime writer F. Tennyson Jesse wrote:

People of unpleasing personality…should be advised never to go into the witness box. The jury did not like the man or his manner which could have been either stoicism or callousness. They did not understand his lack of expression of any kind and they knew it hid something. It could have hidden sorrow or guilt and they made their choice.

Wallace was found guilty and sentenced to hang. However, the appellate court spared and released him. They felt the verdict did not match the purely circumstantial evidence.

Who was the mysterious R. M. Qualtrough who falsely arranged to have Wallace out of the house at the time of the murder? The chess club member who spoke to him on the phone swore the voice was nothing like Wallace’s voice.

Wallace found it impossible to return to his life in Liverpool, so he moved to the country where he died in 1933.

And so the case sat for almost fifty years. In 1980, a radio program about the case pointed the finger at a co-worker of Wallace’s as the killer. According to the story, the man, who had an alibi of being with his girlfriend on the evening in question, appeared at a garage on the night of the 20th needing his car completely cleaned, inside and out. The garage attendant noticed blood-soaked gloves inside the car.

The radio program tracked down the man’s former girlfriend who stated that she was not with him on the 20th.

Was this the long-sought solution? Possibly. But officially it remains an unsolved mystery.