In short, Die Glocke, or the Bell, is an alleged top-secret pinnacle of the Nazi Wunderwaffe war effort. This Nazi Bell supposedly had “some kind of anti-gravitational effect.”

The terrifying object might have escaped the world’s notice were it not for an intrepid journalist named Igor Witkowski. In the year 2000, Witkowski published a book in his native Poland entitled Prawda o Wunderwaffe – or The Truth About the Wonder Weapon. In this expose, Witkowski revealed he first discovered the existence of the device when he read transcripts of an interrogation session of former SS Officer Jakob Sporrenberg.

Witkowski went on to say he was provided with classified documents in relation to Nazi secret weapons by a Polish Intelligence Officer that he refused to identify. Although prohibited from taking direct copies of these files, Witkowski received permission to transcribe them.

Despite the lack of solid evidence to substantiate Witkowski’s claims, the groundwork he performed did pique the interest of British author Nick Cook, who took up the mantle and presented the story of the Nazi Bell to a much wider audience in the book The Hunt for Zero Point.

The Hunt for Zero Point: Inside the Classified World of Antigravity Technology

The alleged Nazi Bell itself was given its moniker due entirely to the shape of the object. Developed using a hard, heavy metal, it stood approximately 3.7 meters tall (12 ft) but perhaps as much as 4.6 meters (15 ft). It had a 2.7 meter (9 ft) diameter at its widest point.

Production of the Bell was alleged to have been inside a facility known as Der Riese or The Giant close to the Czech border. Not far from the Wenceslaus mine is a curious-looking construction dubbed The Henge. It is a concrete frame that may have been constructed specifically for testing the anti-gravity capabilities of the machine. Others dismiss this outright and believe that it was a support for a long-forgotten cooling tower.

When in operation it was said to have a pair of counter-rotating cylinders filled with a violet-colored substance similar to mercury. This metallic liquid had the exotic name of Xerum 525. When not powering the Bell, it was stored in a meter tall thin thermos flask lined with lead. Another liquid used in Bell’s operation included something called Leichtmetall, or light metal. Perhaps this was some sort of lubricant – like adding oil to the engine of a normal car. 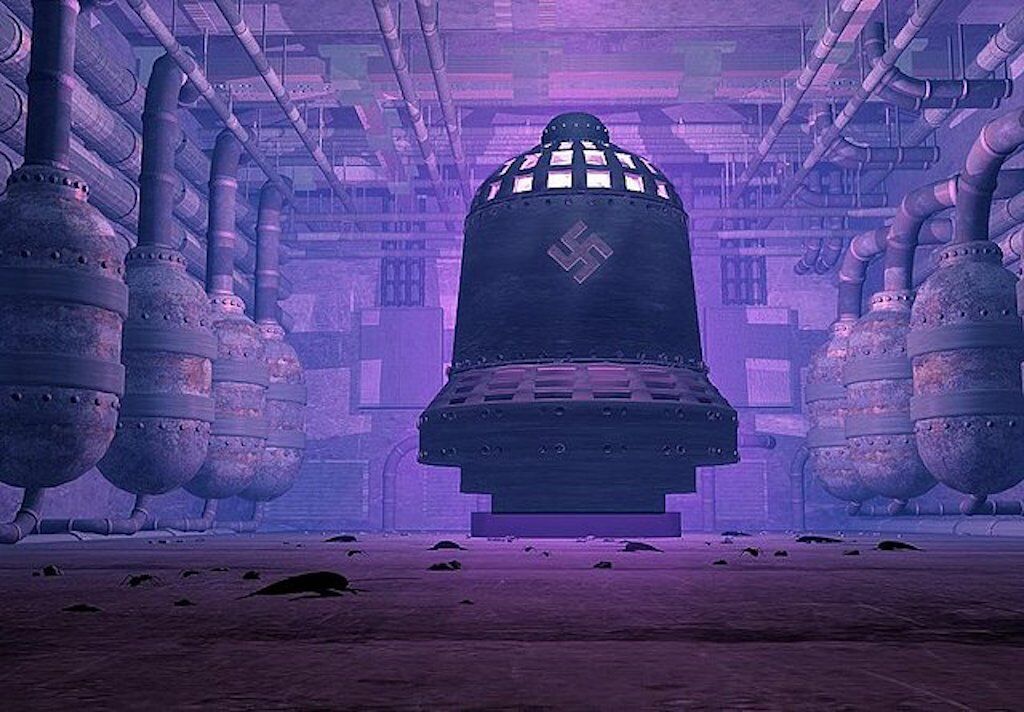 At the end of the Second World War, both the Bell and its team of scientists and developers all disappeared. SS General Hans Klammer, in command of the Third Reich’s secret projects, also disappeared without a trace.

According to legend, Nazi Germany constructed only two Nazi Bells. The second of these, referred to as Ju-390, has not been recovered. There are several intriguing possibilities surrounding the fate of the Bell and Klammer. Either the U.S. military took possession of Klammer and the Bell, or a South American Nazi-sympathizing nation took delivery of man and machine.

Although the storyline is intriguing and sparks the imagination, this story is likely a hoax. Many authors and skeptics note the story as recycled from various 1960s books and magazines noted for their imaginative conspiracy theories and entertainment.