Piri Reis map is a world map created by Ottoman-Turkish cartographer Ahmed Muhiddin Piri in 1513. The map has garnered attention because it appears to show an ice-free Antarctic coastline. If that is the case, then someone discovered and mapped Antarctica centuries before its reported discovery in 1773.

Discovery of the Map

In 1929, Director Halil Edhem went through the basement of a Turkish palace looking for old maps at the request of German theologian Gustav Adolf Deissmann. Edhem happened upon a very mysterious artifact. It was a small map inked onto animal skin, although only a fragment of it remained. At first, it looked like any other aged map. But upon closer inspection, something caught the attention of Deissmann. It was ultimately identified as the Piri Reis map, which incorporated the only known copy of Christopher Columbus’ map. 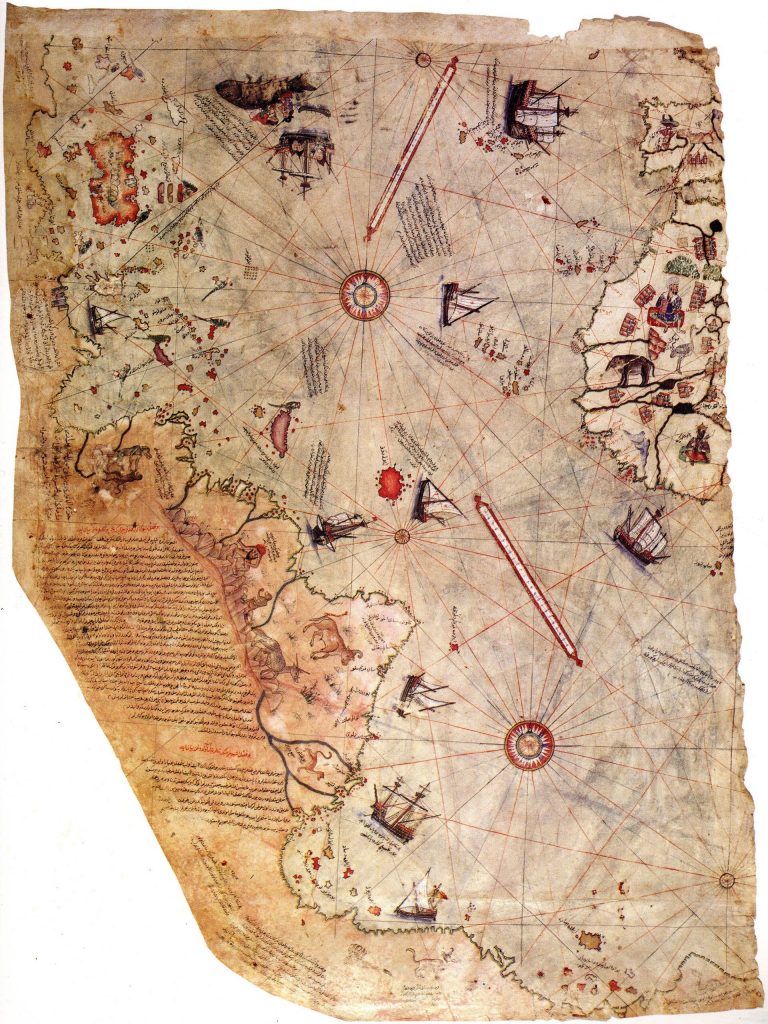 Not only did the Piri Reis map of 1513 include excessive annotations and accurate depictions of the Azores, Canary Islands, Atlantic Islands, and Japan, but historians were amazed to find it included a depiction of Antarctica. However, Antarctica wasn’t discovered until 1773, so how could it possibly be on a map dated 260 years earlier?

The mystery deepened further. Not only did the Piri Reis map show the coastline of Antarctica, but it displayed the proportions of the continent without its ice cap, which were only visible over 6,000 years ago.

The Piri Reis map has proved to be an object of great debate and controversy amongst cartographers, researchers, and historians for decades. Is it proof of an advanced ancient civilization? Does it prove the history of our own civilization is wrong? Or is there a simpler answer to this baffling mystery?

In 1513, Ottoman-Turkish cartographer and geographer Ahmed Muhiddin Piri, otherwise known as Piri Reis, set out to document the known world in map form. Reis was also an admiral in the Turkish navy and a seasoned traveler of the high seas. He knew a thing or two about coastlines and continents. Reis drew up the map on gazelle skin from twenty different sources, making sure to cite every map and chart as he went along. These included eight Ptolemaic (2nd Century Hellenistic and Greek societies) maps, four Portuguese maps, one Arabic map, and one map by Christopher Columbus. Some sources used by Piri date back as far as 400 BC.

Reis acknowledged he hadn’t himself visited many of the lands which he documented. However, his creation was still academically valued. Reis even owned a hand-drawn map by Christopher Columbus. It was left to him in the will of his uncle who personally sailed with Columbus twenty years before. This map was one of Columbus’s ‘lost maps’, so Reis’s reproduction was the only known representation available at the time.

But despite this, the map remained a relatively obscure artifact. It wasn’t until it remerged in 1929 did it begin to conjure up interest. Even then it was still brushed over for a number of years. 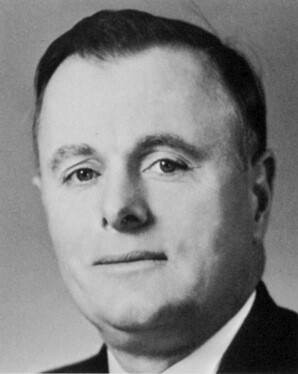 However, in 1965, Professor Charles Hapgood from the University of New Hampshire scrutinized the map with several of his students. They too noticed the maps’ depiction of the Antarctica coastline. But they also picked up on yet another strange anomaly.

The Piri Reis map had been created using the Mercator Projection, a method of creating maps that allowed for a more accurate curvature when moving maps from paper to globe. But European cartographers didn’t utilize this technique until 1569. Once again, the map seemed to have defied the laws of time.

What startled Hapgood the most is the Antarctica coastline portrayed without ice. Of all the maps Reis cited, none showed such a thing. It would require a map thousands of years old as a source – and no such map is known to exist.

This revelation prompted Hapgood to arrive at the only conclusion possible: that ancient mariners had mapped out the Antarctic coast long before the lands had frozen over some 6,000 years ago. He stated the topographical portrayal of the coastline appeared to be so accurate that whatever advanced society created the map must have possessed some kind of aerial mapping capabilities. He believed that Piri Reis must have used one of these ancient maps to create his own, but failed to cite it.

But this bold conclusion implied that everything we knew about civilizations was wrong. Based on what we know, ancient civilizations didn’t possess the tools or capabilities to map out continents on such a grand scale. So how could it have been achieved?

Speculation amongst scholars and historians began to take place. Paranormal researchers pointed to some extraterrestrial assistance. Others hypothesized the possible involvement of a civilization based around the Lost City of Atlantis.

Anomalies In The Piri Reis Map

But soon, skeptics began to dissect the Piri Reis map – along with Hapgood’s findings. They came up with a few new conclusions.

First, there were quite a few notable differences in the sizes of various coastlines on Reis’s map to modern maps. Some areas were missing altogether. However, Hapgood attributed this to copying errors made by Reis. To combat this problem, Hapgood took it upon himself to insert some of the ‘missing’ sections based on the source maps Reis had used.

But then a few problems arose. After filling in some of the empty areas and altering landmasses account for errors, Hapgood found that the map now had five separate equators.

But despite this, the map continued to capture the imaginations of other researchers. This included notable fraudster Erich von Däniken, who parroted Hapgood’s claims that the map is proof of extraterrestrial influence.

The magic of the Piri Reis map lied in the accuracy of its representation of Antarctica. However, critics are quick to point out that Antarctica on Reis’s map barely resembles the real continent at all. But of some researchers believe it is possible that the Antarctica landmass has altered over time. 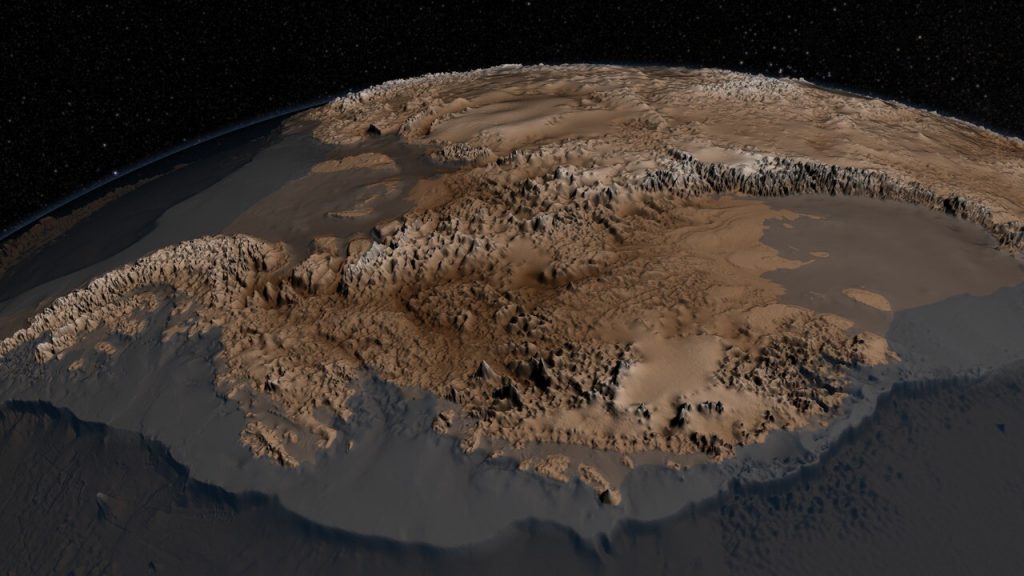 A 2001 image of the bedrock topography of Antarctica. Image: Public Domain.

But with all of the map’s errors discovered, it soon became clear that the representation of “Antarctica” on the map may not be Antarctica at all.

In fact, a possible answer to many of the Piri Reis map’s mysteries may lie in Reis’s sources.

As Reis used at least eight Greek maps and charts to draw up his own map, this was one possible solution.

Alternatively, there’s actually one final, even simpler theory. What many believed to be an ice-free depiction of Antarctica is actually nothing more than the South American coastline. Some researchers hypothesized that Piri Reis simply ran out of room to draw on the gazelle skin. So he crammed as much of South America in as he could.

Interestingly, Reis’ notes backs up this theory. In his notes, he states this region is ‘very hot’ and ‘full of snakes’. While these descriptions certainly wouldn’t fit in with what they knew about Antarctica at the time, it could very well describe the Amazon Jungle.

Despite these findings, the mystery of the Piri Reis map continues to baffle and astound researchers to this very day. There has been no ‘official’ answer to these questions, so it’s up to people to make up their own minds.

Does the map show an ice-free Antarctica from over 6,000 years ago? Is it proof that an alien technology once existed on earth? Or did Charles Hapgood let his imagination get the better of him, and the map simply shows an imagined southern landmass or the South America coastline?