For us, it may seem sad or disturbing, but for many, post-mortem photography brought great relief for grieving loved ones.

During the Victorian era, post-mortem photography – or photographing the dead – was a normal part of the American and European cultures. These Victorian death photos assist with the grieving process. They also served to document what a deceased loved one looked like at a time when photography was not as commonplace. In other words, a death photo of a baby or parent may be the only image from which to remember a person. 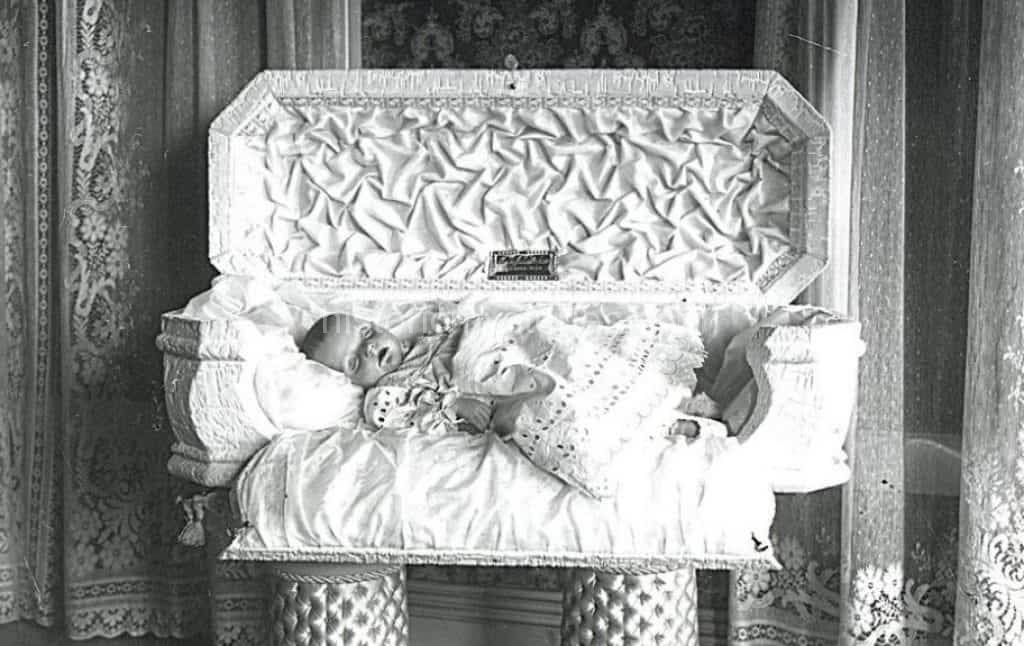 Post mortem photography of a baby in a casket circa 1900, New Hampshire. Wikimedia Commons, public domain.

Daguerreotype photography first became commercially available in 1839. The invention of the daguerreotype enabled families to pose bodies and snap memorabilia. In some cases, these were the only photographs that contained the entire family. However, this type of photography was very expensive, as it involved very detailed images on polished silver.

Dan Meinwald from his article “Memento Mori: Death and Photography in Nineteenth-Century America” explain the significance of post mortem photography:

Why Photograph the Dead?

The purpose of post-mortem photography was for survivors to have a “last look” at family members and loved ones who died. The creation of death masks taken directly from the face of a corpse was another way to memorialize the dead. Although the photos may seem creepy and disturbing, they help families grieve and remember those who had passed away. In some ways, these photos were also a tribute to the dead. Another important thing to consider is the high infant mortality rate of these earlier eras. It would not be uncommon for families to have babies or young children die from an illness. These post-mortem photos often served as the only documentation those families ever had of the lives of these loved ones. However, it wasn’t just the young that were photographed; adults and the elderly were also captured in many of these photographs.

How Photographers Took the Photos

Post-mortem photography involved many different techniques and styles. The most simple is of a body lying in a natural sleeping position, such as in a crib or on a bed. Sometimes family members held up the bodies or even propped them up in a chair. In some cases, they placed the bodies in coffins and photographed them either upright or laying down. Photographers sometimes portrayed the decedent as alive in the photos. Sometimes they appeared asleep. There were also various contraptions that incorporated clamps and wires that prop the body in an upright position for photographs. Sometimes these photos were of a single subject; sometimes they consisted of entire families who died together.

The thought of post-mortem photography in today’s world may seem unconventional or morbid because photography is a normal part of everyday life. We live in a different world now where everyone has been photographed or filmed at some point in their life. A grieving family member can simply look at a Facebook page or photo album if they want to reminisce a loved one.

Special Delivery: It Used to be Legal to...