Did Arthur Conan Doyle Murder for the Baskervilles Story?

Sir Arthur Conan Doyle was a doctor and author during the late 1800s and early 1900s. The Sherlock Holmes stories were his claim to fame, but The Hound of the Baskervilles might be his most impressive work. In 2000, the accomplished writer came under allegations that he stole the Baskervilles plot and characters from Bertram Fletcher Robinson and then killed him to silence him. Does a real-life detective mystery lie behind the supernatural detective mystery? 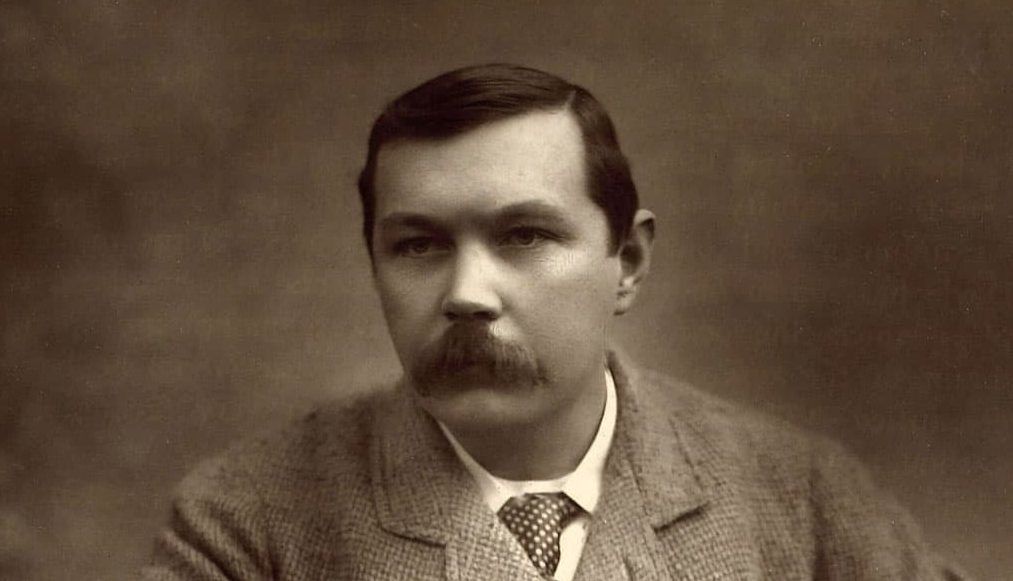 Conan Doyle was the author and creator of Sherlock Holmes and The Hound of the Baskervilles. Public domain.

The Strand Magazine initially serialized The Hound of the Baskervilles in 1901. The supernatural detective stories caused an absolute sensation at the time, and readers could not get enough of these adventures. Undoubtedly, the severe pressure that the public put on Conan Doyle was the very thing that fueled his own drive. They wanted something new after Doyle killed off Sherlock Holmes, so he came up with The Hound of the Baskervilles to appease them.

Controversy Over the Originator

But the story didn’t originate strictly from Doyle. A huge slice of the credit also belongs to another writer, and friend, of Doyle, Bertram Fletcher Robinson. Nicknamed “Bobbles,” Robinson was the genius that initially came up with the entire concept behind the supernatural tale of a hound from hell that – excuse the pun – dogged the Baskerville family for generations. In fact, when The Strand Magazine published the story, it also included a dedication to Robinson, written by Conan Doyle.

The Strand featuring A. Conan Doyle and The Hound of the Baskervilles. Public domain.

Sir Arthur Conan Doyle and Bertram Fletcher Robinson once spent four days together on a golfing trip in 1901. During this time, Robinson told Doyle about the stories of ghost dogs that roamed Dartmoor. They then discussed co-authoring a “real creeper” together. (History Today).

Robinson lived in South Devon close to Dartmoor where he had grown up with the legends and tales of the land. He took Conan Doyle on a personal tour of the nooks and crannies that were scattered around the moor. Sir Arthur was inspired by everything that he saw and heard. The wonders of the moor fueled his imagination to create a hybrid story that still resonates to this day. Conan Doyle blended Sherlock Holmes with the tale of the ghostly hounds. However, the publication in The Strand and, later, the book contained only one author name: A. Conan Doyle. 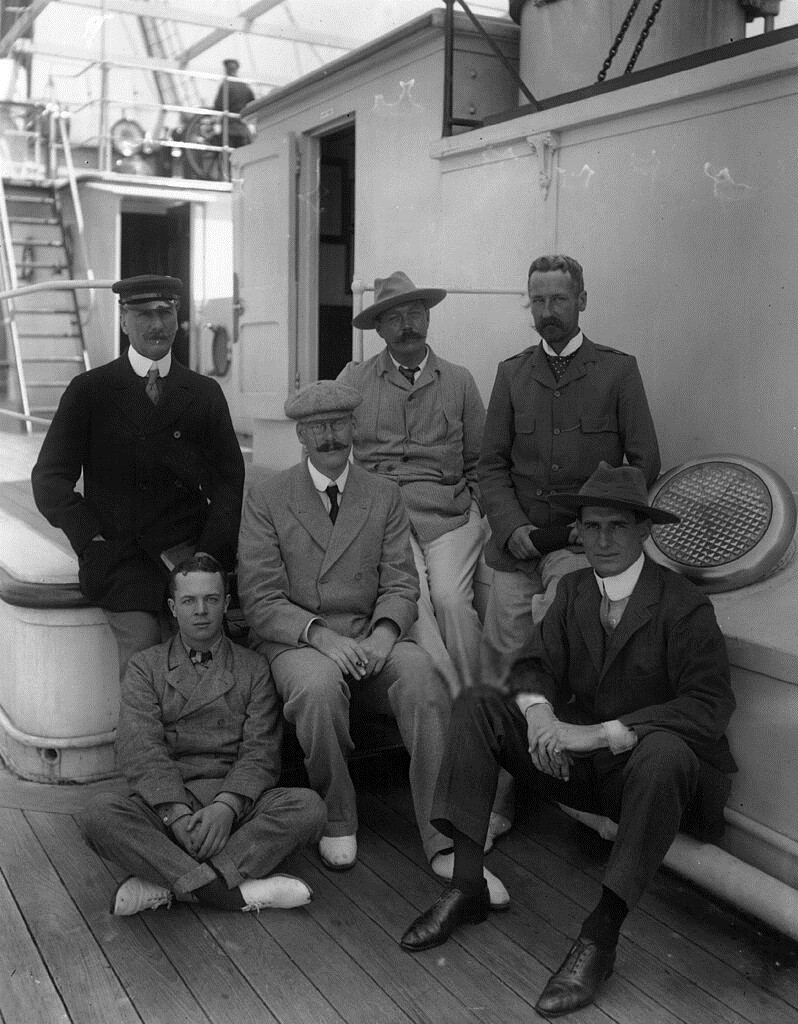 Doyle (center) and Robinson with glasses sitting to his right, 1900.

Rodger Garrick, a psychologist and writer, has been researching the relationship between Doyle and Robinson for more than a decade. According to Garrick’s theory, Robinson did more than simply guide Conan Doyle around the vistas of Dartmoor. He believes that Bertram Fletcher Robinson created the plot entirely and that Sir Arthur Conan Doyle stole it. This was the extent of the more nefarious activity that Conan Doyle was previously alleged to have participated in.

However, Garrick took it one step further. He posited that fear of exposure led Conan Doyle to act proactively and somehow manage to persuade Robinson’s wife, Gladys, to systematically poison Robinson with laudanum over a period of time. According to Garrick’s theory, murder would have have been easy to get away with since Gladys and Conan Doyle were purportedly engaged in adultery.

Assuming for a moment that all of this true, news of a scandal of this magnitude would have ruined Sir Arthur Conan Doyle professionally and personally. Garrick believes that the brilliant author saw little alternative but to silence his friend for good.

Sherlock aficionados dismiss this controversial idea but do concede that Robinson is somewhat of an unsung hero in the creation of the narrative. Had it not been for Robinson, Conan Doyle may never have heard the legend of a real man, Richard Cabell, who supposedly sold his soul to the devil. In the end, a pack of gigantic hounds dragged him to hell. Even today, the actual tomb of Cabell in Buckfast is housed in a mausoleum that is circled with wrought iron railings that are there to prevent the corpse riding with the hounds.

Cabell was the inspiration for the character of Hugo Baskerville, but the name came from Robinson’s coachman, Harry Baskerville, “. . . who years later in a radio interview said the two men discussed a manuscript written by Robinson called An Adventure on Dartmoor” (CNN). Robinson later acknowledged that he contributed to the story as Doyle’s “assistant plot producer.”

To Reopen the Case or Not?

Rodger Garrick was adamant that Doyle did plagiarise the work of Robinson. He did actually managed to find a copy of Robinson’s own work – An Adventure on Dartmoor. More than ever, he was certain that the similarities between the two novels are not a coincidence. Many people at the time saw Sherlock’s resurrection in The Hound of the Baskervilles as a masterstroke. However, Garrick believes that the story’s success was only possible due to the efforts of Robinson.

Garrick is not the only voice that has considered this possibility. Perhaps buoyed on by Garrick’s original assertions, a team of half a dozen academics once petitioned the Diocese of Exeter and the Home Office for permission to exhume the body of Bertram Fletcher Robinson. Robinson’s official cause of death in 1907 was typhoid. However, the team behind the request is convinced that laudanum poison was the true cause of his death.

The Robinsons’ marriage had its fair share of problems, mostly owing to the fact that they could not have children. Gladys Robinson is rumored to have sought comfort that Conan Doyle was only too happy to oblige with. Garrick contends that Gladys administered the laudanum to her husband, perhaps without even realizing what she was doing. His research came to the attention of at least one senior detective in Scotland Yard, who had promised to look into matters and potentially open an investigation.

In Support of Conan Doyle

One member of the Sherlock Holmes Society, Heather Owen, outright dismisses these claims. She insists that this was entirely out of character for Conan Doyle and was simply far-fetched. On the other hand, Conan Doyle had an affair with Jean Leckie, later to become Doyle’s second wife. They claimed that the relationship had been platonic out of respect for Doyle’s first wife. Once they married, they remained so for the rest of their lives. Additionally, Owens stated that Conan Doyle wanted more credit awarded to Robinson. It seems the publisher may have refused since Conan Doyle was the name behind the detective.

Also according to History Today’s Richard Cavendish, Conan Doyle contacted his editor of The Strand Magazine and told him that he wanted Fletcher Robinson made co-author on the publications:

I can answer for the yarn being all my own in my own style without dilution, since your readers like that. But he gave me the central idea and the local colour, and so I feel his name must appear.

It appears that Robinson did not feel resentment about The Hound of the Baskervilles. Some sources say he even received royalties early on. According to his own statements, he continued to regard Sir Arthur Conan Doyle positively until his own death in 1907. Also, after his first wife died in 1906, Doyle married his second wife in 1907. An affair with Robinson’s wife seems unlikely. This eliminates any motive for murder after all. Could it be that initially, the two men had a joint project that failed to remain joint when Doyle’s publisher refused to list a co-author?

In the end, perhaps there is no murder mystery and Conan Doyle was the honorable man he was known as.

Still, many people wonder who really wrote The Hound of the Baskervilles. It’s elementary, my dear reader. As Sherlock Holmes himself often cites: When you have eliminated the impossible, whatever remains, however improbable, must be the truth.

History of the Ancient Library of Alexandria