Tupac Shakur was an intensely famous rapper known for his insightful and often contradictorily violent music. That very violence often made him a target outside or possibly even inside his circle of friends. He was the Elvis Presley of gangsta rap. He was cut, considered handsome, dangerous, an actor, hated by mothers around the world and he refused to die. To this day, many people claim Tupac Shakur is not dead. The real mystery is not whether he is dead. It is who killed him. 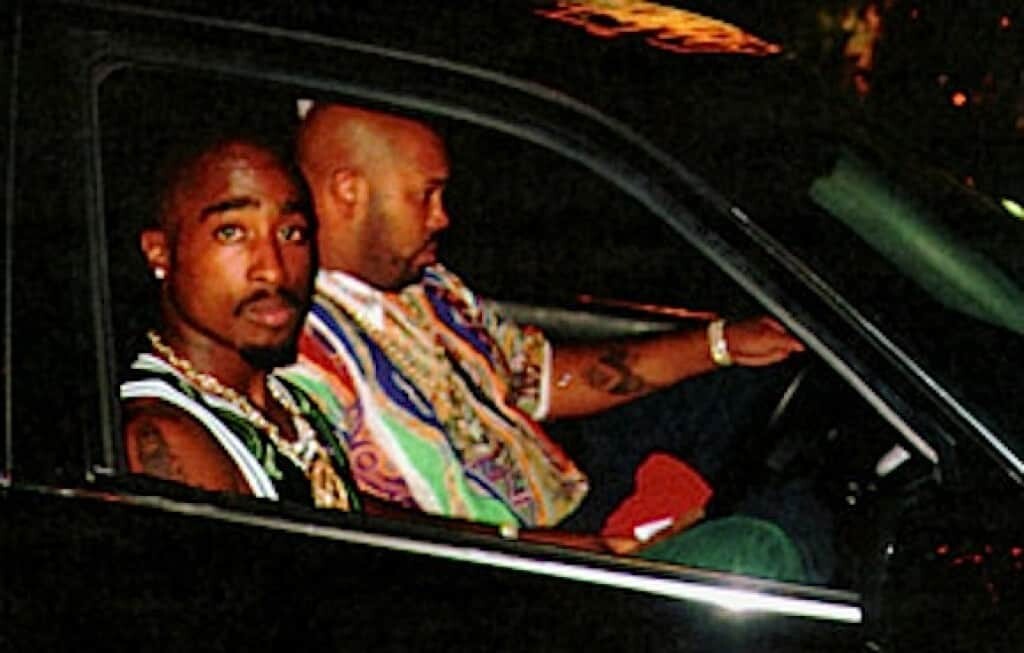 Tupac Shakur riding in a car with Suge Knight, minutes before Tupac’s fatal shooting. From the cover of The Killing of Tupac Shakur by Cathy Scott. Source: Hiphop City.com

Tupac Shakur was once friends with another rapper who went by the name of Notorious B.I.G. The two had a falling out when Tupac was shot in a recording studio where B.I.G. was working with the head of Bad Boy Entertainment. Tupac, who was affiliated with Death Row Records, claimed to have been set up and eventually began firing insults at Notorious B.I.G. in his music. This eventually escalated into a West Coast/East Coast rap feud that even extended to the fans.

Another aspect of his life that reportedly caused tension and drama was the gang affiliation of Tupac Shakur’s boss Suge Knight. Suge Knight was obviously affiliated with the Bloods — a violent gang. There was some speculation that Bad Boy Entertainment was linked to the Crips, but that connection is not confirmed as Suge’s connections were. Either way, Tupac was connected with a noted gang affiliation. As such, he was clearly a target for Crips. On the night of his murder, he was involved in the beating of a Crips member.

Circumstances, rivalries and suspicions set the backdrop for the murder of Tupac Shakur. It seems likely that some of this, if not all, was the cause for his untimely death. However, there is no way to know at this point. The murder remains a mystery.

A few hours after Tupac Shakur and his group left the MGM Grand in Las Vegas, where they beat a member of the Crips, they were driving down Flamingo Road. The lead car contained Tupac Shakur and Suge Knight. Suge Knight was at the wheel and stopped at a red light around 11:17 p.m. According to some sources, Shakur was standing with his head out of the sunroof speaking to or looking at some women in a car to the left of the BMW in which he was driving. Other sources state he sat in the passenger seat looking at or speaking to the aforementioned women with his seatbelt engaged.

According to witnesses, a white Cadillac pulled up to the right of the BMW and a passenger in the rear opened fire on Tupac Shakur. There are conflicting sources regarding the number of bullets fired, the number that hit Shakur and where they hit. The most common story is that he took four in the chest. Another is that he took one in the chest and three in various other body parts. The bullet or bullets that killed him were those he took in the chest. It prompted severe internal bleeding and the failure of one of his lungs. However, he was still alive when police arrived and emergency services took him to the hospital.

Tupac Shakur was in the hospital for six days before he finally perished. He endured several surgeries, one of which involved the removal of a lung. After several resuscitations, his mother ordered that he be allowed to die. His death fanned the flames of the East Coast/West Coast feud and may have also resulted in the unsolved murder of rapper Notorious B.I.G. Rumors flew about a hit ordered by Notorious B.I.G. and/or Sean Combs. There were also rumors that it was a hit by the Crips.

The obvious suspect in the case was Orlando Andersen, the man Tupac Shakur had beaten on camera the night he was killed. However, he was cleared as a suspect, as he was still being questioned by police when the murders took place. Police claim they were unable to glean any more information from bystanders other than the killer was an African-American male in a white Cadillac with four other African-American males and he used a pistol to kill Tupac before the car sped off. Despite the packed streets and number of eyewitnesses, police never found the car or any of the men in it.

There are no suspects. There are very few clues. The case has gone cold. Police blame the unsuccessful investigation on a lack of cooperation by witnesses. Some witnesses claim the police never talked to them. The mystery is muddied by this transfer of blame, the hostility surrounding the gangsta rappers of the ’90s and the gang affiliations of those involved.