The Trojan War is an epic story originally told by Homer in the Illiad and later used by Virgil in the Aeneas. There are heroes, gods, and kingdoms pitted against each other. Everything from Paris’ bid for Helen to the defeat of Troy echoes with ancient Greek myths. Indeed, most of the saga is likely fiction. Nonetheless, some truth may pepper the fictional accounts. However, separating the truth from the fiction is a monumental task, and many historians question whether the Trojan War ever happened or if it was just a myth.

The story of the Trojan War comes from Homer’s epic poem the Iliad. In it, the gods instigate a war between the Greeks and the Trojans that is further perpetuated by both kingdoms’ greed and bloodlust, as heroically portrayed. There are numerous characters in the story whose existence can be called into question.

The main characters that take part in the Trojan War in some way are Helen of Troy — formerly Helen of Sparta — Menelaus, Agamemnon, Achilles, Paris, Hector, and Odysseus. Odysseus, a soldier for the Greeks, is nearly certainly a creation of Homer. Reading of the Iliad and the Odyssey make this virtually inarguable. Helen is the wife of the Spartan King Menelaus, and she is abducted by Paris, the prince of Troy, to be his wife. 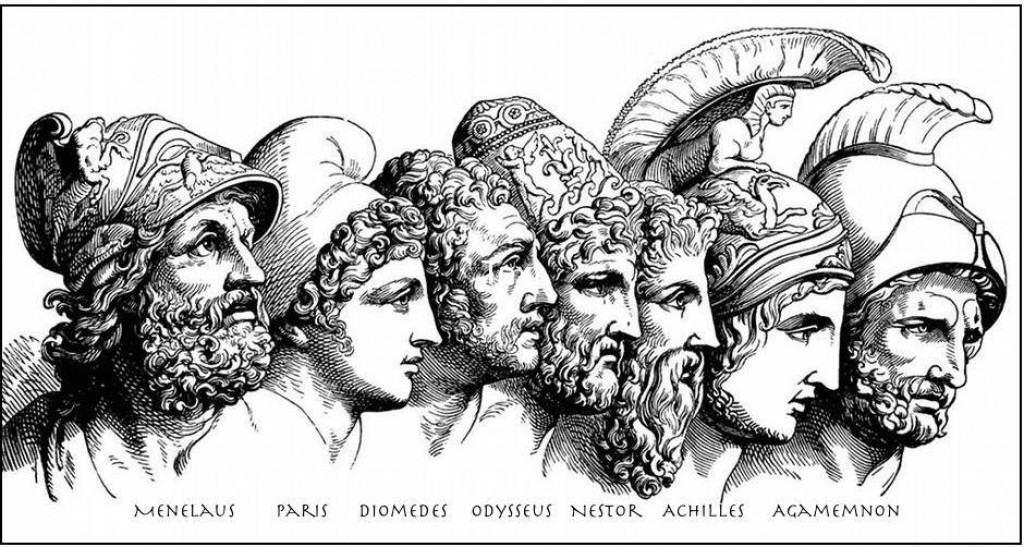 The main characters of the Trojan War myth in the Iliad. Source: Clipart.com, modified.

The existence of Paris and his brother, Hector, is questionable. No records exist that attest to them. Sparta did exist without a doubt. However, there is nothing earlier than the Iliad to suggest that Menelaus, his wife Helen, and his brother Agamemnon existed. There is no King Menelaus in known Spartan history of the time. As for Achilles, he is a hero of the Greeks in the story, but there is nothing more than tales of his skill and bravery to support his existence. All of these characters are widely regarded as a myth.

The Basis of Homer’s Tale

Homer probably wrote the Iliad sometime around the 8th or 9th century BCE, though some scholars place him around 1200 BCE. The Trojan War may have occurred between 1194 BCE-1184 BCE for the entire ten-year span. There is a distinct possibility that Homer was writing of a war that he learned through oral history or from some text that is not available to modern researchers. Given the hundreds of years that passed, it is understandable that Homer would have embellished and colored in the gaps.

Story of the Trojan War

The Trojan War allegedly started with Paris’ kidnapping of Helen. She was brought back to Troy from Sparta, at which time Menelaus sought to have her returned by force. An army of Greeks set out to destroy Troy, but first attacked the wrong city. Later, the king of that city showed them the way to Troy. Once there, the Greeks demanded the return of Helen. King Priam of Troy refused. Over the next nine years, the Greeks fought Troy while destroying neighboring towns in order to cut the city off. Eventually, Achilles killed Hector, the Trojan hero of the war. Paris then killed Achilles, the Greek hero of the war. After all of this tragedy played out, Odysseus came up with a brilliant plan to take Troy. 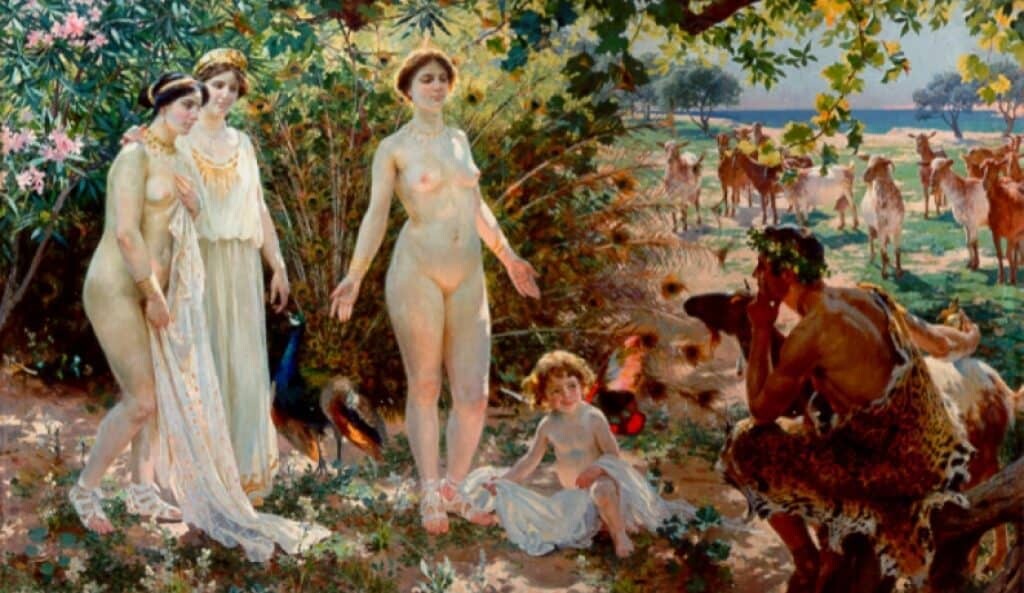 In the “Judgment of Paris,” Paris must judge three goddesses. He chooses Aphrodite because she will give him Helen, the most beautiful woman, and thus, the Trojan War will begin. Enrique Simonet, 1904.

The Greeks built a gigantic wooden horse and filled it with their own soldiers. They offered it to the Trojans as a sign of truce, though they never let on what was inside of the horse. They even had every other soldier and every Greek ship leave Troy to aid in the deception. Once the horse was inside the gates of Troy, the soldiers emerged from within the horse and took the city. They raped, pillaged and then burned Troy. The war itself and this destruction may be the only aspects of this myth that are true. There is no evidence of a Trojan horse. However, archaeologists have found what many believe is Troy. This does not prove that Homer’s story is true. However, it does show that it may have been based on a war that was already history by the time he wrote the Iliad.

For most ancient Greeks, indeed, the Trojan War was much more than a myth. It was an epoch-defining moment in their distant past.  As the historical sources – Herodotus and Eratosthenes – show, it was generally assumed to have been a real event.

In the late 19th century, Heinrich Schliemann traveled to Turkey in search of the fabled Troy. He had heard rumors that a possible site in Hisarlik, located on the west coast in Anatolia, could have been the site of the Trojan War. Excavations proved to be fruitful when he found an abundance of artifacts. Schliemann dated the finds to the Late Bronze Age, although they were even older than that. This put the artifacts at an earlier time than Homer’s account, however, other evidence, such as arrowheads and fires, points to the time period that Homer described.

Archaeological research of the site, which includes no less than nine cities, each built on top the ruins of the one that came before it, highlights similarities to Homer’s description of Troy and the neighboring area. This makes it the most logical candidate for Troy, and many scholars agreed that Troy was a real place in history.

Without any archaeological smoking gun, the Trojan War myth still endures. Inscriptions left by the Hittites, who called Troy Wilusa, tell of conflicts with Troy, but Anatolia was a tumultuous region for all groups. Chances are that if a large war did occur, it was not at the scale of Homer’s war. History can be incredibly difficult to decipher, because like so many ancient authors, Homer blended real historical facts and actual geographical locations with fiction. As such, the Trojan War still exists strictly in the realm of imagination.

The Practice of Dowsing for Water, Oil and...