Is There Encoded Religious Meaning in the “Twelve Days of Christmas”?

The “Twelve Days of Christmas” is one of our most beloved Christmas songs of all time. The famous tune is catchy and has been re-written and re-recorded countless times over the centuries. In 1979, Hugh McKeller, a hymnologist, published a book that he called How to Decode the Twelve Days of Christmas. In it, he proposed that Catholics who were unable to legally practice their religion from 1558-1829 in England composed the lyrics as a catechism to secretly help young Catholics remember their faith. Since that time, others have suggested the same thing. And thus, the urban legend about the true meaning of the “Twelve Days of Christmas” began. Today, many people believe that there are encoded Catholic messages within the lyrics. 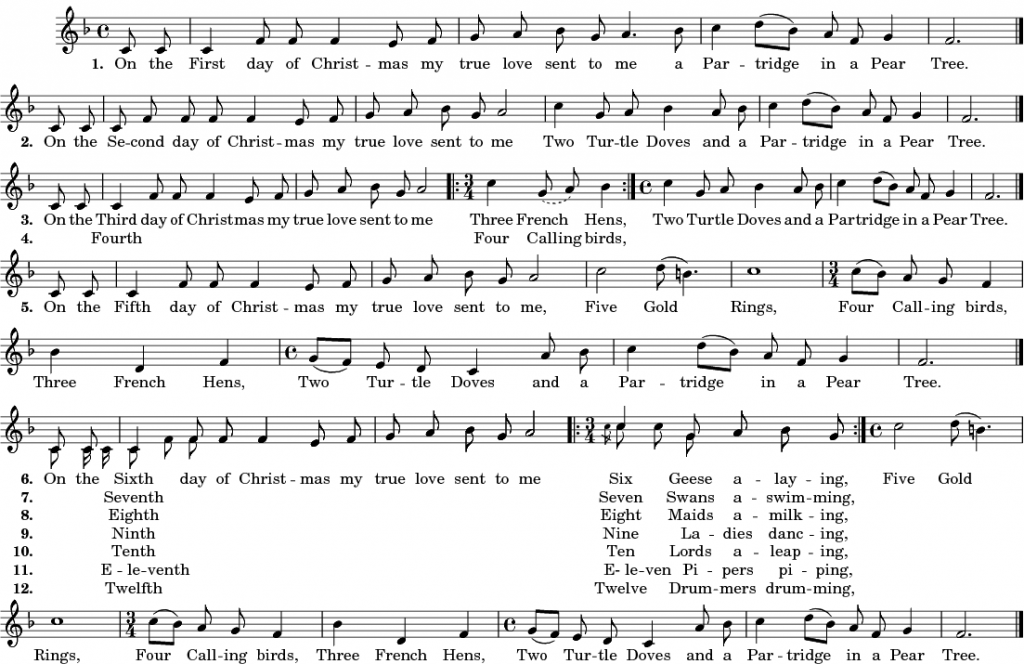 Do the lyrics convey a hidden meaning in the Twelve Days of Christmas? CC BY-SA 4.0 Grover Cleveland.

What Are the Twelve Days of Christmas?

The phrase “Twelve Days of Christmas” is a religious concept based on the stories about Jesus in the Bible. The amount of time it took the three wise men to travel to Bethlehem and proclaim Jesus as the Son of God (the Epiphany) is generally called the Twelve Days of Christmas by most Western Christians. Instead of the Epiphany, some Christians believe the 12th day is the day Jesus received his baptism. The first day of the twelve days falls on December 25, while the Twelfth Night is the evening of January 5 and often involves festivities. The twelfth day, called the Epiphany, falls on January 6 and marks the end of the Christmas season. Thus, at the very least, the name of the song certainly references the Bible. The rest of the lyrics and their meanings are controversial.

Who Wrote “Twas the Night Before Christmas”?

On one side of the debate are those who believe that the meaning of the “Twelve Days of Christmas” lies buried in hidden religious messages. Others believe that the song is and always has been a fun secular piece simply designed to entertain merrymakers during the Christmas season.

According to David Mikkelson who addressed the controversy on Snopes, “Although the specific origins of the song ‘The Twelve Days of Christmas’ are not known, it possibly began as a Twelfth Night ‘memory-and-forfeits’ game in which the leader recited a verse, each of the players repeated the verse, the leader added another verse, and so on until one of the players made a mistake, with the player who erred having to pay a penalty, such as a offering up a kiss or a sweet” (2000). Mikkelson indicates that the lyrics were depicted this way in the earliest-known written version of the song in the book Mirth Without Merit in 1780. However, he indicates that the original version probably existed long before its first printing.

A Legend About the Meaning

The premise of the urban legend places the origins of the “Twelve Days of Christmas” firmly in a dark period of English history. During the 16th century when Parliament outlawed Catholicism in England, it became an offense for Catholics to practice their faith even behind closed doors. Therefore, the song supposedly emerged as a way for them to remember their teachings without the risk of a criminal offense that might lead to execution. Proponents of this line of thought believe that the so-called catechism song has a slew of meanings that are symbolic of the Catholic faith.

What Do the Gifts Symbolize?

According to the catechism theory, the “true love” who sent all of the gifts in the song is not an earthbound suitor or partner but refers instead to God himself. The recipient of all of the gifts is not one person. Anyone that had ever been baptized can receive these gifts. Additionally, each gift represents a biblical concept:

How Much Religion is in the Song?

As Mikkelson argues, Protestants and Catholics believe in the same Bible, albeit different versions. Thus, the supposed messages in the song apply to both religions, and Catholics had no need to encode commonly-shared beliefs.

An alternate version of the legend states that it was Christians who created the poem during a time when Christianity was illegal. This is debatable, as the celebration of Christmas would most certainly have also been prohibited. However, the lyrics expressly mention Christmas throughout. It was not uncommon, however, for poems, songs, and catchy chants to serve as catechisms. In fact, some people theorize that the “Twelve Days of Christmas” has been confused with the song “A New Dial,” in which each number is associated with a biblical lesson. 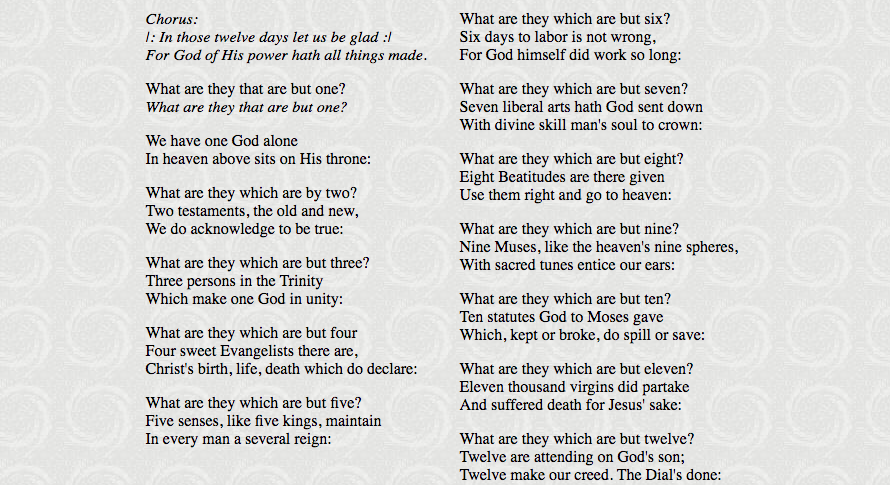 “The New Dial” song may be as old as the “Twelve Days of Christmas” and teaches twelve Christian lessons. Musicanet.

The Face Value of a Fun Song

Except for the name of the song which references the story of Jesus, there is no evidence that each gift symbolizes a different religious tenet. It’s a bit of a stretch to say that Nine Ladies Dancing really mean the Fruits of the Holy Spirit. And since when do hens represent the Trinity? As suggested, the song would be much more useful as a fun memory-building song or game. More simply, it appears that the true meaning of the “Twelve Days of Christmas” transmits a spirit of giving, community festivities, celebration, and fun, i.e., dancing, leaping, piping, and drumming, rather than twelve solemn sacraments of Christianity.