Baba Yaga is one of the most famous, yet confusing, witches in Slavic folklore and children’s fairy tales. If you run into her, you can’t be sure whether she will eat you or speak tenderly to you and grant you your wishes. The legend of Baba Yaga probably arose when the religions of Europe contained a pantheon of gods and creatures, both of which controlled the forces of nature and the destiny of man. No one knows for sure when or where her story originated, however, it appears that she has been a part of oral tradition in Northeastern Europe and Russia for millennia. 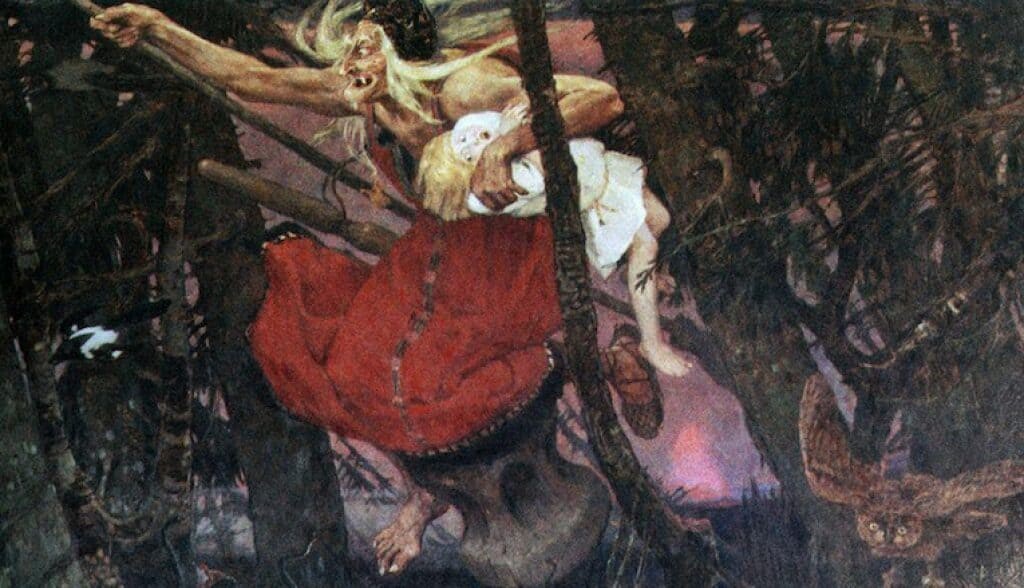 The Russian Baba witch riding on her mortar, carrying her broom in one hand and a child in the other. Victor Vasentsov.

What Does Baba Yaga Mean?

The first written reference to her was in 1755 in Mikhail W. Lomonosov’s Russian Grammar. Baba has been translated as old woman, hag, or grandmother, depending on which Slavic language is being referenced. Yaga or Iaga has no definitive scholarly consensus. The word means horror and shudder in Serbian and Croatian, anger in Slovenian, witch in old Czech, wicked wood nymph in Modern Czech, witch and fury in Polish, and serpent or snake in Sanskrit.

The Russian witch is described as a deformed, scraggly old woman with bony legs, a very long crooked nose, piercing cold eyes, and iron teeth. Every single body part, including her eyes, ears, feet, hands, and mouth are grotesque and deformed. With a demeanor that is powerful and highly tempestuous, she instills fear and guarded respect in everyone that encounters her. 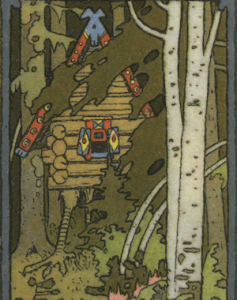 The Russian Baba witch lives deep in the dark forest. She owns a hut that’s more like an animal than a house, for it rests on skinny chicken legs that move around in the forest to evade anyone looking for the witch. The lively windows serve as spying eyes that watch over her forest domain, while the fence posts around the hut are built out of old human bones. Human skulls sit atop each fence post. When her house moves, it spins while emitting a screeching noise until it comes to settle down with groans and creaks. Perhaps shy or aloof, the witches’ hut will turn its back toward all visitors.

Various versions of the Baba Yaga witch story state that she is either a single witch or a trio of witches who all share the same name. Most tales say that she rides around the forest in a giant mortar that she uses with a pestle to grind up the bones of the people she eats. When flying, she holds the pestle in her right hand and a broom in her left. The pestle works like a rudder that steers her. The broom wipes away all of her trails so that no one can find her. In other versions of the tale, she alternatively flies around on a traditional witches’ broom. Baba Yaga can remove her hands from her body so she can have them do her bidding.

She has the power to help or hurt anyone who crosses her path. Those who seek her wisdom, truth, and knowledge must first complete several tasks. If the tasks are completed, she will give her help. If the tasks are not fulfilled, and the seeker has not found a way to escape, she will cook and eat them. 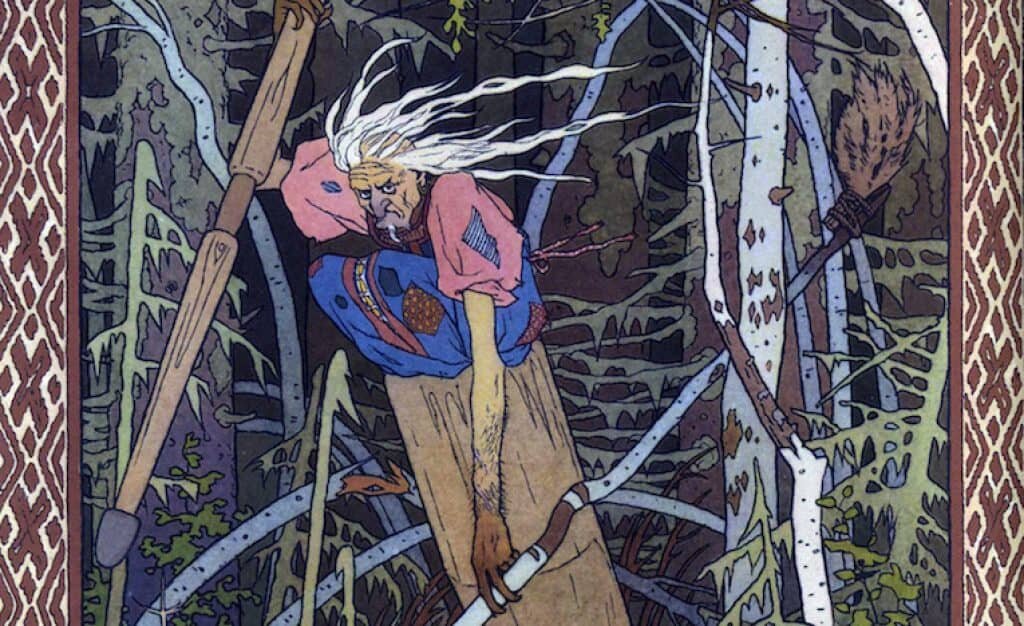 The Slavic Baba witch, from Vasilisa the Beautiful 5

Similarities to the Famous German Fairytale

One tale closely resembles the story of Hansel and Gretel. Two children enter Baba Yaga’s hut and she gives them impossible tasks to complete. If they do not fulfill the tasks, she plans to put them in the oven and cook them for dinner. They are able to escape with the help of some talking forest creatures, a tree, and a gate. Another story tells of a young girl, Vasilisa the Beautiful, who seeks Baba Yaga’s help to find some firelight. After Vasilisa completes several tough chores, Baba gives her a fire in a skull lantern and lets Vasilisa return home. 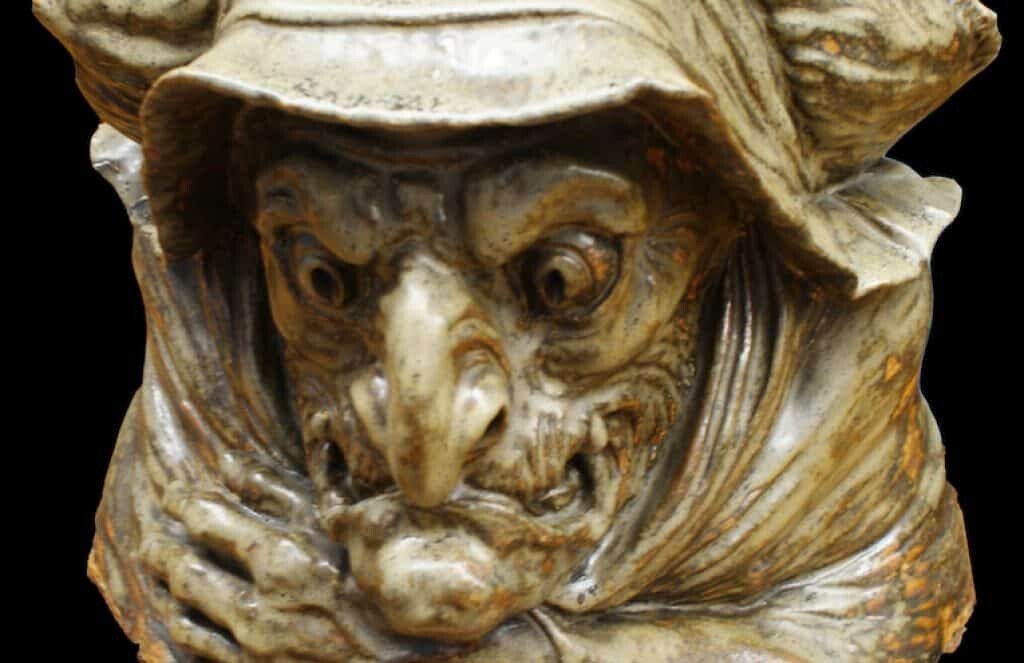 Baba Yaga is a mysterious and rather confusing character. She possesses many contradictory qualities, and although she is quite ruthless and vile, she is also beneficent and kind. Baba is omniscient – she knows all things – and will reveal anything if the person is worthy. The kindhearted, noble, virtuous, and heroic people that come in contact with her receive gifts from her. She also controls all the elements of nature like Mother Earth, and she can be quite motherly at times.

The Baba Yaga story and poems are in many children’s books today, and there are many variations of the famous witch. The moral of the Baba witch story seems to be that anyone who possesses a loving and honorable heart can overcome even the worst evil. Surely, any story that can teach that to our children should endure.