Noah’s Great Flood is one of the most famous stories the Bible has to offer. Now, two geologists and an acclaimed underwater archaeologist think they have found proof of the event that inspired the legend. The results of their research indicate the Black Sea flood and Noah’s Great Flood are the same.

In 1996 two Columbia University marine geologists brought a measure of credibility to the flood story with their discovery. They found evidence showing that a catastrophic flood took place in the Black Sea about 7,600 years ago. Geologists Dr. William B. F. Ryan and Dr. Walter C. Pitman III, of Columbia’s Lamont-Doherty Earth Observatory in Palisades, New York found archeological, geological, and climate data to support their thesis. They believe that these discoveries can change history. 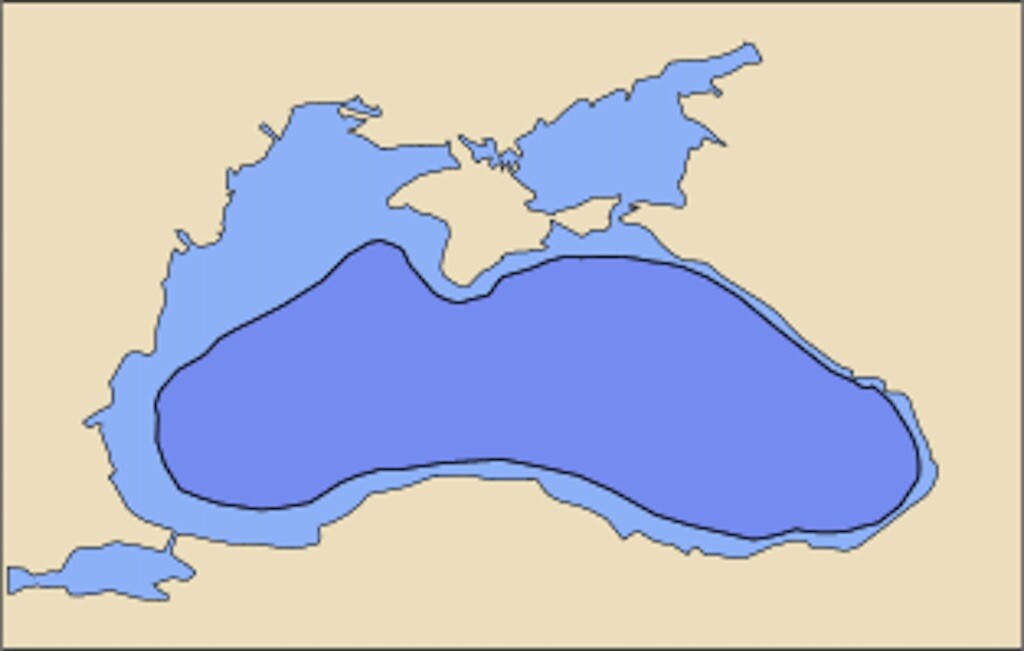 Black Sea today (light blue) and in 5600 BC (dark blue) before the Black Sea Flood, according to Ryan and Pitman’s hypothesis. Image: Bogdan Giuşcă

In 1996, two Marine Biologists from Columbia State University, Dr. William B. F. Ryan and Dr. Walter C. Pitman, claim that in 5600 B.C., saltwater from the Mediterranean and Aegean seas escaped into the Black Sea, which was a landlocked freshwater lake at the time. They believe the flood covered more than 60,000 square miles of coastal plains and increased the size of the Black Sea to the extent it is today. 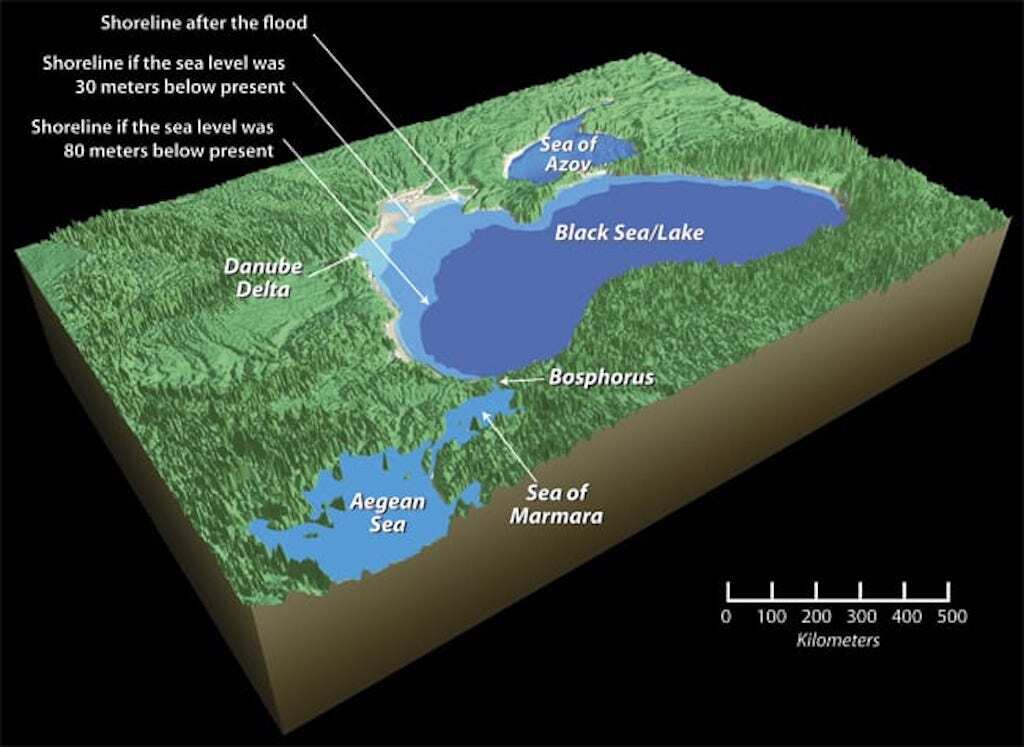 The initial shoreline and the revised shoreline following the 2009 study of the Black Sea Deluge. Image: Whoi.edu.

In January 2009, Liviu Giosan of Woods Hole Oceanographic Institution (WHOI) and Florin Filip and Stefan Constantinescu of the University of Bucharest, conducted a study and determined the flood was not as extensive as Ryan and Pitman claim. The new study suggests the waters rose only 5-10 meters, as opposed to the 80 meters suggested by Ryan and Pitman. Although the scale of flooding is much lower than previously thought, it still submerged approximately 2,000 square miles of once dry land.

Robert Ballard, one of the world’s best-known underwater archaeologists, is also researching this area. He also believes that the water levels of the Mediterranean and Aegean seas rose, and the runoff escaped into the Black Sea.

Christiane Amanpour interviewed him for ABC News regarding his research. During the interview, he talked about his findings.

His team found traces of an ancient civilization hidden underwater while they were probing the Black Sea off the coast of Turkey. These findings support Ryan and Pitman’s theory and also seem to support the Bible’s story of Noah’s Flood.

Ballard has much experience in this underwater research. In 1985, his crew found the world’s most famous shipwreck, the RMS Titanic. Now Ballard is using robotic submersibles equipped with remote-controlled cameras to verify his claim regarding the flooding of the Black Sea.

Ballard and his crew found an ancient shoreline four hundred feet below the surface, which is proof to him that a catastrophic event happened in the Black Sea. By carbon dating shells found along the shoreline, Ballard said he believes they have established a timeline. He estimates it occurred around 5,000 BC. This research is building on the theory of Dr. Ryan and Dr. Pitman.

Related: Where is Noah’s Ark? A Chronology of Searches

Their theory suggests that stories regarding this traumatic event became an oral tradition and passed down from generation to generation. The Black Sea Flood ultimately became recorded and written down as the biblical account of Noah’s Great Flood. Ballard’s research fits right in with Dr. Ryan and Dr. Pitman’s controversial theory. It is controversial because not everyone agrees with the findings.

Some researchers believe that it is too early to tell if their results point to a real event and think that more research is needed. Ballard and his team said they plan to return to Turkey and continue their investigation the next summer.

According to a report published in 2009 by Yavor Shopov, within a year of the flooding,  many settlements along 160,000 square kilometers were destroyed within a year. He also claimed this flooding triggered the mass migration of tribes to other areas of Europe and Asia.

We traced migration of some of the Arian tribes all the way from Black Sea region to India using toponims and hydronames formed on the base of their ethnic names.

Catastrophic events, such as flooding, are not unique to the Bible. Earthquakes and comets have struck the Earth time and again. Internet searches reveal several recent floods caused by earthquakes and tsunamis. It is easy to assume how a historic earthquake may have produced the greatest catastrophe of all, Noah’s Great Flood.

How Old is the Sphinx? What Evidence Do...

Narcissus Myth: Early Poets and Versions of the...

Dennis Brooks is retired from the US Army and is living in Honolulu, Hawaii. He has spent 20 years researching Atlantis and other mysteries. He published a book called Atlantis: Ten Tribes of the Americas and is working on another, which will be out in 2014.