A Drive Through Bunker Hill, Los Angeles, CA in 1948

On 3 September 2011, Rick Prelinger uploaded a gem of vintage 1940s Los Angeles. The silent video clip is called A Drive Through Bunker Hill and Downtown Los Angeles, ca. 1940s. It’s a visual reminder of an area of Los Angeles that no longer exists as it once did. The specific area is Bunker Hill, now part of the financial district of downtown Los Angeles. But as this video reveals, Bunker Hill, Los Angeles once was a community of stores,  hotels, apartment buildings, and Victorian homes. 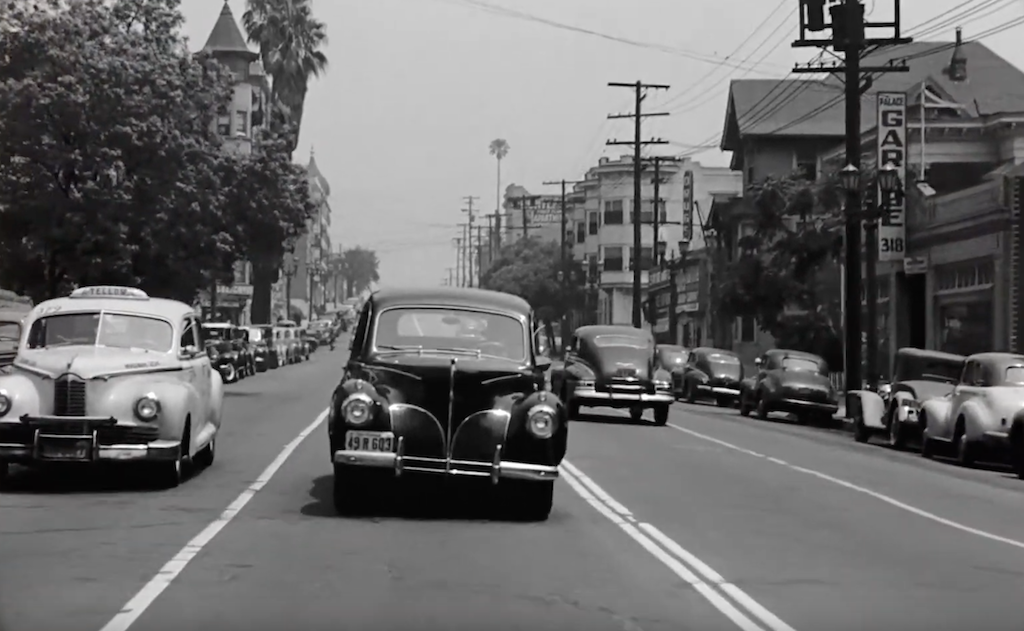 Bunker Hill was once just an undeveloped hill surrounding Los Angeles. It was after 1867 before homes started to be built there. In 1886, approximately 11,00 residents called this place home. Within a year, the population grew by another 39,000. By the turn of the century, Bunker Hill became an exclusive neighborhood of two-story mansions for the rich and famous.

In 1901, a 298 ft. funicular railway named Angel’s Flight was installed to ferry people from downtown Los Angeles and the hill.

By the 1930s, wealthy residents of Bunker Hill began relocating to lesser crowded areas such as Beverly Hills. The Victorian mansions gave way to rental apartments and hotels. The demographics changed as more working-class and poverty-stricken residents began calling this place home.

In 1955, the Los Angeles Community Redevelopment Agency cited Bunker Hill as a slum area. Their report stated the following:

“With the onset of the Great Depression, the area’s housing stock became severely deteriorated and crime, fires, and health conditions worsened by the 1940s. The district’s squalor and crime discouraged new investments and the recycling of existing housing stock. Bunker Hill, formerly the site of lavish Victorian mansions, came to symbolize urban decay in the heart of the metropolis.”

The Bunker Hill Urban Renewal Project in 1959 provided a green light to clear the area for redevelopment. The city reduced the hill’s elevation by some 30 ft. and zoned the area out for high rise developments.  Within a decade, the neighborhoods had all been demolished.  The only remaining remnants of this bygone era are the Angels Flight funicular connecting Hill and Olive St, and the Central Library. 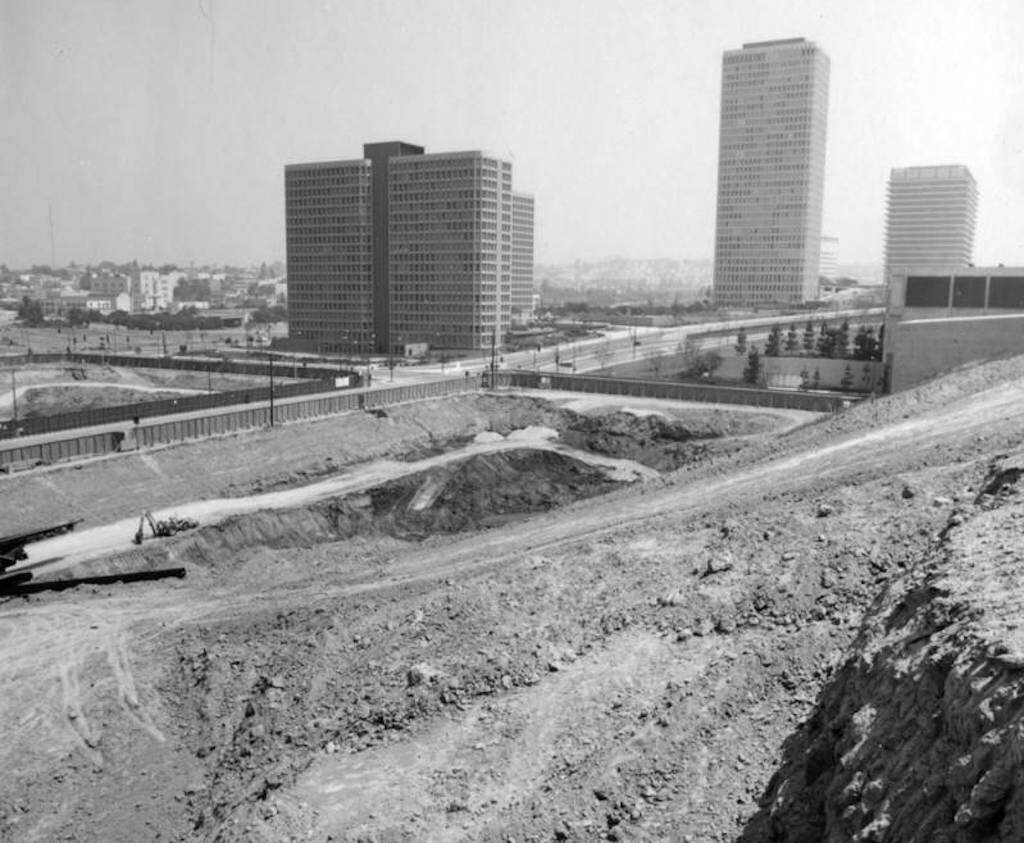 A 1971 photo of Bunker Hill during re-development. This area is in the vicinity of Grand Ave and Third St. Image: Security Pacific National Bank Collection.

Centralia Mine Fire: Devastation from Underground
The Battle of Los Angeles

The video below is what the film industry calls a background process plate. Its purpose is to serve as a background for car scenes in Hollywood films. Originally believed to be filmed sometime in the late ’40s, the consensus now says 1948.

Beginning (00:00): The video begins on Second Street between Olive and S. Grand Ave.

Movie Scene (01:08): At this location in the movie clip, Laurel and Hardy filmed a hilarious bicycle scene in the 1927 release of Duck Soup. 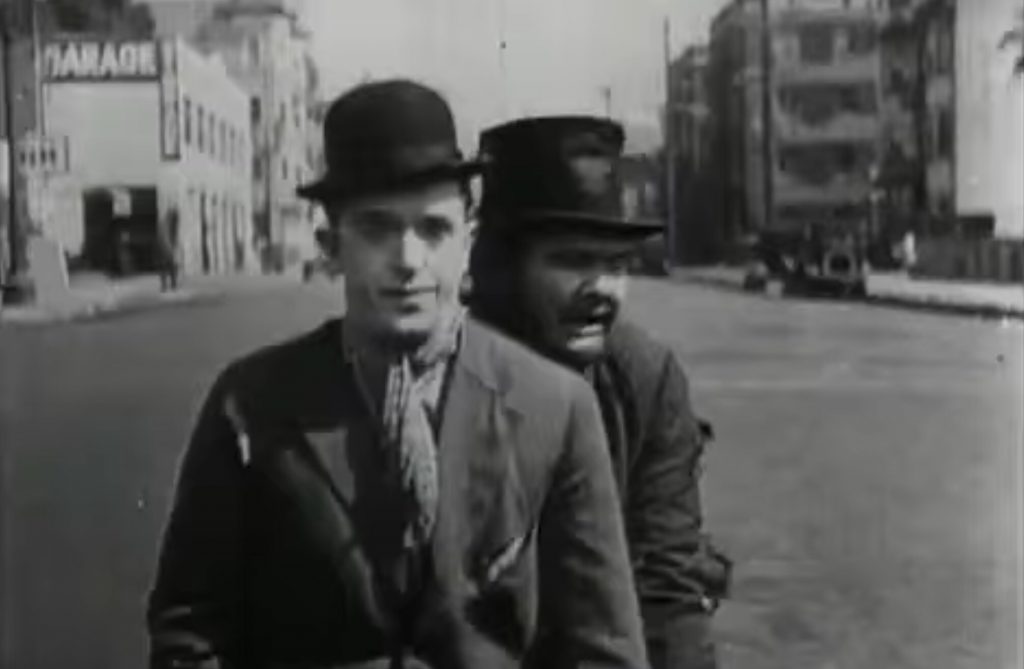 Laurel and Hardy in Duck Soup (1927). The Biltmore Apartments on the right.

Victor RCA Television Billboard (03:25):  The Victor RCA Television billboard advertisement shows a donkey and elephant squaring off with boxing gloves. The text on the sign says, “Pick a sure winner!” Since the donkey and elephant represent the Democrat and Republican parties, this suggests a national election is imminent. On 2 November 1948, Democrat Harry S. Truman beat Republican contender Thomas Dewey.

Bire-leys Billboard (03:25): An advertisement is seen on the right saying “I go overboard for you and Bire-leys.” Bireleys, a regional non-carbonated, orangeade company, had a manufacturing plant located at 1127 N. Mansfield Avenue, Hollywood, CA.

Here is a great map of the route in the video above. The map also shows the establishments in the area. 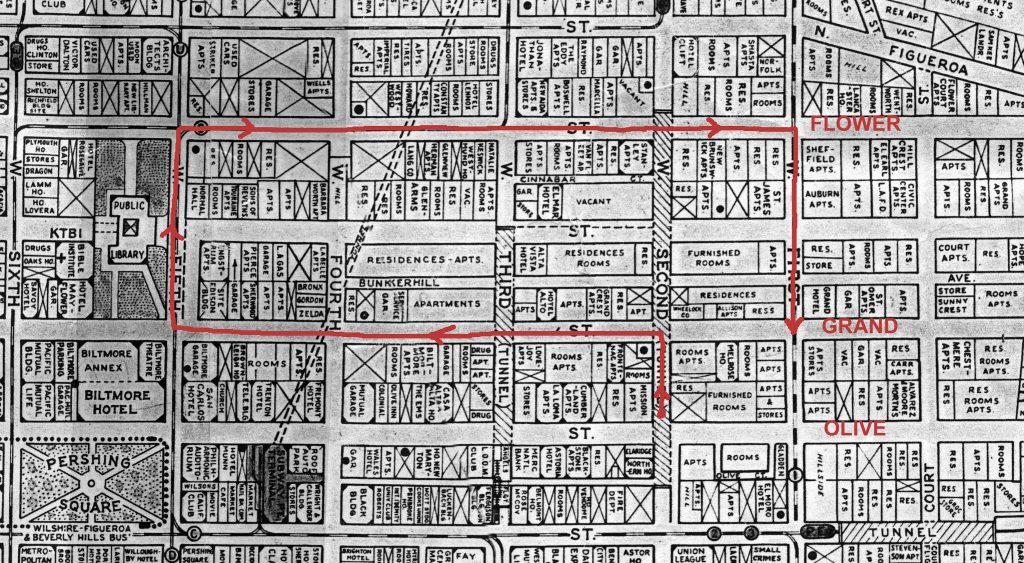 Keven McAlester produced a great video recreating the original route of the footage above. This shows exactly how much things have changed in 70 years.