Home » History » 5 Rites of Passage From Around The World
History

There are certain ways to know you’ve become an adult. In western countries, it’s when you drive your first car, drink your first beer, or graduate from high school. In other cultures, however, becoming an adult was a more harrowing affair. Here are some the strangest and most disturbing rites of passage that people around the world practiced.

Here are 5 rites of passage that may make you cringe:

Although it may be one of the oldest rites of passage around, there’s something weird about the concept of circumcision – even if it’s clean and medically sanctioned. If you’re a fifteen-year-old Mardudjara boy, however, it’s just excruciating. A Mardudjara boy would lie down before a crackling fire, surrounded by one group consisting of dancers and another group of wailing men, fittingly called ‘the mourners.’ The tribal elder would then pull up and twist the penis while two other men took turns hacking at the exposed foreskin. That’s already a bit much for a simple circumcision, but it gets worse. After this agonizing process, the elders would have him open his mouth to eat the “good meat” produced by the process. You can guess what that is. Having now “eaten his own boy,” the child would grow into a strong man.

2. The Roar of the Okiek

The second rite of passage involves the Okiek, also known as Ogiek people, who live in the forests of Kenya and Tanzania. According to Okiek legend, a host of monsters called ‘cemaasiit’ haunt the forests at night. If you listened closely, you could hear their eerie roar ripping through the leaves. That’s exactly what young girls and boys did to pass over into adulthood– listen. The children were, as part of a ghostly disguise, painted white and covered in charcoal. They had to fend for themselves for 24 weeks, paying special attention to the cries of the cemaasiit. When, after emerging from their isolation, they reproduced the cemaasiit’s roar– they are considered men and women. 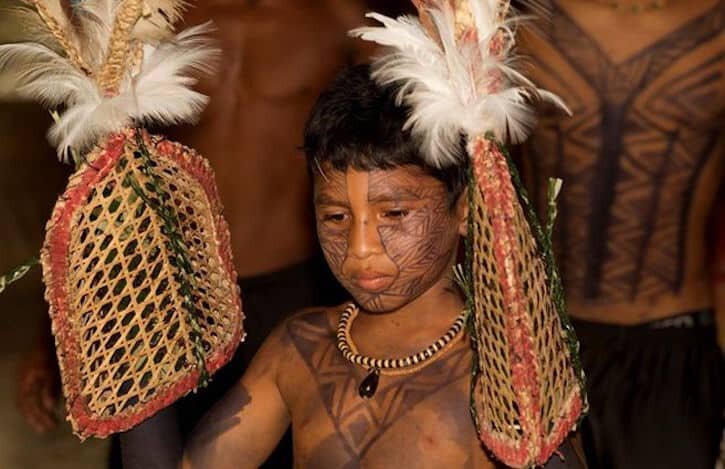 Few things are more objectively painful than the sting of a bullet ant. According to Dr. Justin Schmidt, who created an index by which to measure the painfulness of insect stings, being stung by a bullet ant “shuts down all illusions of life as normal.” Young men of the Satere-Mawe tribe, who live along the Amazon river, are acutely aware of this pain. One of the few tribes that still practice their rites of passage, it involves collecting bullet ants from the forests and lacing a pair of leafy gloves with the horrifying critters. The young men then have to wear the gloves twenty times for ten minutes each, for a total of over three hours. Needless to say, they are crippled for the next few days.

In many ways, the most sinister ritual of them all, the effects of the Algonquin rites of passage are intended to stay with those who experience it for life. Like the Okiek, the Algonquin isolated their young men from family and friends, but there was a psychological aspect to this isolation. While in seclusion, the boys would ingest large amounts of the drug wysoccan, a powerful hallucinogen. The wysoccan supposedly suppressed childhood memories, which was the purpose of the ritual. If the young man came back with any memories from his past, he would be sent back into the wild to repeat the whole process over again.

5. The Bizarre Violence Of The Okipa

When it comes to gratuitous violence, however, the Okipa people of North Dakota were certainly at the top of the skull pile. Their rite took four days and was intended to recreate the story of the creation of the world. The village elders dragged the young men, kicking and screaming no doubt, into a dark lodge and impaled them through their backs and chests on wooden spikes. After being hung several feet in the air, their bodies were held down by buffalo skulls dangling from other spikes piercing their legs. The pain was utterly intense, but the Okipa frowned upon crying as cowardly. You have to give them credit for this one. It takes a certain imagination to come up with a ritual this specifically arduous and agonizing.

You May Also Like:
Ancient Tattoos of Ötzi and El Morro Man
Bizarre Wedding Rituals Around the World

The Theft of the Mona Lisa is What...

Belle Starr: The Midwestern Bandit Queen of the...