Migrations and settlements, the evolution of a culture, wars between tribes, and the ultimate decimation of a whole population define the course of Easter Island history. How was the island settled and by whom? What happened along the way that caused the island ecosystem to collapse? And what were the complex issues that caused the fall of the civilization of the islanders called Rapa Nui?

How Was Easter Island Settled?

Approximately 750,000 years ago three volcanoes converged to form Easter Island, also called Rapa Nui. It is located about 2,300 miles off the Chilean coast. Sometime between 300-700 C.E. Polynesians took to the sea and made the long journey in their large, sturdy canoes. They used the stars like expert navigators and found an island on the southeastern edge of Polynesia. There they found a beautifully landscaped island covered in trees that they would eventually call Rapa Nui. The voyagers took with them paper mulberry trees, chickens, rats, sugarcane, and taro from their homeland, and they began farming the land. Hence, their new civilization had begun. But it was not destined to last.

Drawing in 1781 of Hawaiians in double-hulled canoe by artist, John Webber aboard Capt. Cook’s ship. This canoe may be similar to what the Easter Islanders may have traveled in. Source: U.S. National Library of Medicine.

Discovery of the Island by Jacob Roggeveen

In 1722 Jacob Roggeveen, a Dutch explorer, stumbled upon the world’s most isolated inhabited island of the Pacific Ocean. He decided to call it Easter Island, after the day he discovered it. Roggeveen described the islanders as having a variety of skin colors, but not black. Some, but not all of them had earlobes that they stretched down to their shoulders. They typically wore plates in the large ear holes or flipped up the loops back up over the ears. Captain James Cook also visited the island in 1774, and his expedition artist drew depictions of the islanders with long ears. They also decorated themselves with feathered headpieces and shells.

Copy of early depiction of the Long Ears. Source: “The Great Navigators of the Eighteenth Century” Jules Verne 1880 on Easter Island history.

Once a Green Paradise

A 19th-century Tahitian visitor is credited for naming the island Rapa Nui, because its shape reminded him of the Tahitian island of “Rapa,” but was bigger – “Nui.” Initially, the island was a lush paradise, as it was filled with large palm tree forests. There were no natural rivers or lakes on the island, but the volcanic craters stored fresh water from the rains.

The people of the island, also Rapa Nui, maintained a caste system and geographic clans, which the great chief or “ariki mao” led. He was a noble leader that the islanders considered to be of divine descent. Other less powerful ariki who governed certain districts were selected from the winners of dangerous competitions. They ruled for a year until the next winner was selected.

Were The “Long Ears” People From Peru?

As noted above, there were two different groups of inhabitants of Rapa Nui. They were the Long Ears and the Short Ears. Thor Heyerdahl theorized that the Long Ears were ancient Peruvians who were the first inhabitants of the island. Local legend states that the Short Ears revolted against the Long Ears and they eliminated most of them. Indeed some of the famous stone statues on the island bearing carved faces and long ears resemble statues around Lake Titicaca in Peru. This adds credence to the theory that at some point there may have been Peruvians on Easter Island. Additionally, the islanders had sweet potatoes, which originate from South America. However, two questions are still debated. Were the Short Ears Polynesians from the faraway land? And who arrived first?

At the height of their civilization, the Rapa Nui people numbered around 12,000. Fishing vessels fed the people, and islanders erected large statues called moai around the coast. The moai are perhaps the most iconic feature of Easter Island today. There are roughly 900 left on the island. They stand as tall as 30 ft. Many people think of the moai as the Easter Island Heads, however, they are actually heads and full torsos. Over time, soil buried the bodies until nothing was visible but the heads.

The first Europeans to the island observed the islanders kneeling and bowing with their hands together at the base of the moai. During ceremonies, the islanders inserted coral as the whites of the eyes and obsidian or red basalt for the irises. Each moai weighed on average 80 tons. It is still uncertain exactly how the islanders moved them such great distances. Experts speculate that moai are representations of ancestors and divine kings that they venerated. However, the true purpose of the statues is still up for debate. Interestingly, one of the island groups toppled many of the moai. Did this happen when the Short Ears conquered the Long Ears?

Interestingly, the Rapa Nui people had an independent system of writing, which was expressed in the form of glyphs. This was a type of script known as Rongorongo. Experts have not been able to find anything like it anywhere else in the world. Additionally, only an elite few, such as spiritual leaders or kings, ever knew how to write and decipher its cryptic meaning. Unfortunately, those leaders never passed on the information, and most of it disappeared throughout time. This makes it difficult for scholars to retrieve the details of Easter Island history.

Archaeologists have taken much interest in Easter Island. They have explored and dug, and evidence suggests that original settlers began the process of deforestation of the island to make way for the planting of crops. Additionally, islanders used trees to build fishing boats, houses, shrines, and to transport the moai to the coast from the quarries. But eventually, there were no more trees to gather. This ended the construction of moai, islanders had to restrict fishing to the immediate coast as boats deteriorated, and the agricultural soil eroded away.

Wars Between Clans Take Their Toll on the Culture

In addition to a depleted ecosystem, Easter Island history is rife with conflict. With a serious shortage of resources, the various clans eventually began destroying each other. They took land from the weaker clans and toppled many moai statues. By the time Roggeveen arrived in 1722, the island was treeless and most of the moai were laying on the ground. The Rapa Nui culture was on the brink of extinction. What the early explorers found after Roggeveen’s visit were populations of separate groups that had lost all knowledge of their history and culture.

The first European contact with the islanders led to a skirmish. One of the islanders attempted to take a gun away from a sailor, and the Europeans opened fire. This resulted in the death of 12 islanders. Although this introduction was rocky, both sides patched up relations and the islanders traded bananas and chickens for linens.

Eventually, the island became a regular port call for whalers and other travelers. At first, Rapa Nui was a welcoming port with its pleasant people and attractive women. However, the islanders would soon resent these visitors.

Exploitation Leads to Decimation and Ruin

The sailors would sometimes shoot and kill an inhabitant they found to be too aggressive or excitable. Europeans soon viewed the populace as a source of labor, and in the case for women, sexual satisfaction. Visitors began abducting the islanders to replenish crew members, and Europeans infected the women with various sexually transmitted diseases. This further destabilized Easter Island’s civilization. The population of islanders peaked just before Roggeveen arrived. But, by the mid-1700s, major population decline was taking place and would continue to drop.

The final blow occurred in the 1860s when slave traders hunted and sold the islanders to the lucrative slave traders in South America. The population declined dramatically. It wasn’t until public discontent arose in Peru that the government put an end to slavery and repatriated the islanders back to Rapa Nui. By 1877, there was irreversible damage. Only about 100 inhabitants remained on the island. The repatriated islanders who managed to survive the long voyage back from Peru brought further death to the populace by spreading smallpox to the rest of the natives. The population slowly began to creep up again around the year 1900, and in 2012 there were 5,761 people of mostly Polynesian descent.

Rapa Nui was once a green paradise that warmly welcomed the Polynesian travelers after their long journey. Fast forward a little more than a thousand years and we find that the ecosystem had collapsed, resources diminished, and internal (amongst the clans) strife and external exploitation had destroyed their civilization. Additionally, Easter Island history and many of its secrets died in the oral tradition of the people. 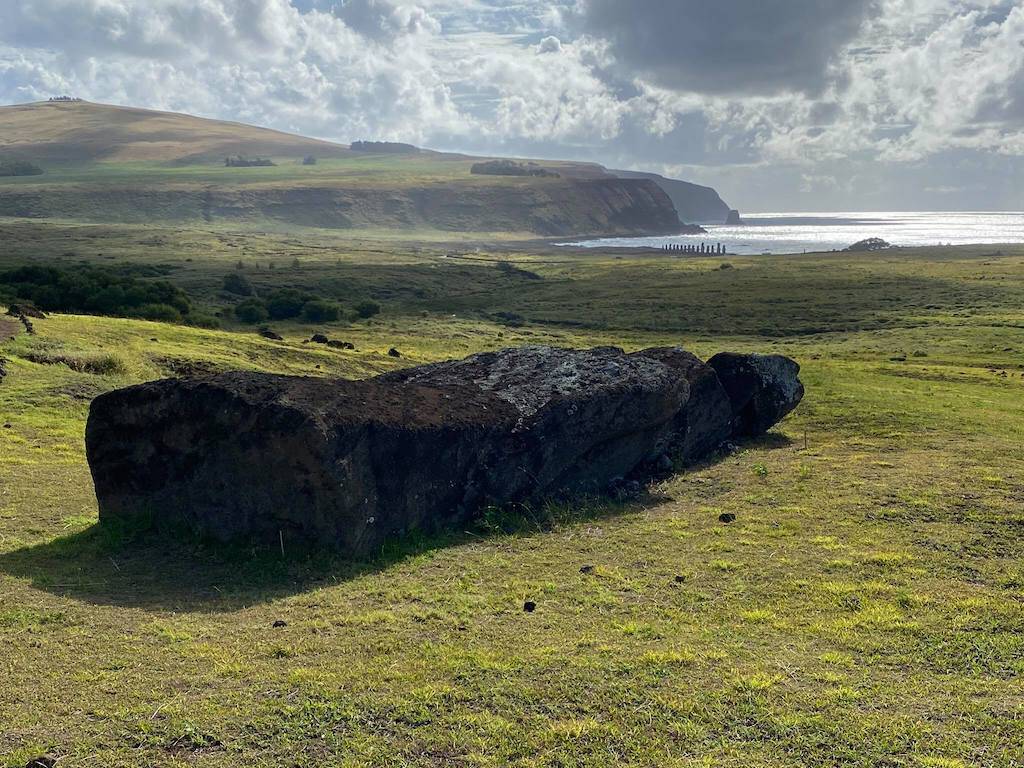 A Moai Statue on the barren ground. Image: Historic Mysteries.

Although Easter Island has seen its fair share of changes and challenges, the island still sits nobly in the salty Pacific, ultimately impervious to all but the wind and rain. And just maybe its grandest days are yet to come.

The Practice of Dowsing for Water, Oil and...