Home » History » First Thanksgiving: What Was it Really Like for the Pilgrims?
History

First Thanksgiving: What Was it Really Like for the Pilgrims?

In the U.S. we have a quaint idea of the way the first Thanksgiving happened. The table was set with a bounty of different foods, life with Indians was peaceful, and everyone shared in the duties of bringing in the fall harvest for the celebration of the new settlers in America. However, the real question is, what was that first Thanksgiving really like?

What Was the First Thanksgiving About?

Pagan Easter: Where Did the Modern Tradition Really Originate?

This part of the story we learned is absolutely true. The Pilgrims were learning New World agriculture and hunting from their Native American friends the Wampanoag’s, their leader Massasoit and their Pawtuxet guest Squanto. When they reaped their harvest in 1621, about 50 Pilgrims celebrated with close to 100 natives in a three-day feast. We only feast for one day, but most of what we learned fits this description.

What Did the Pilgrims Eat?

Today, we eat turkey, stuffing, cranberry sauce, and vegetables as the base feast for our Thanksgivings. We also tend to have lots of pies and bread. We often see this same feast depicted in “historical” representations of the holiday. It has gotten to the point that turkeys are like the Easter bunnies of Thanksgiving. The feast of 1621 looked very different, though in some ways the same, as our feasts today.

Let’s start with the all-important turkey. People on Massachusetts’ South Shore will tell you that wild turkeys are plentiful. Furthermore, one contemporary report of the feast says that some of the revelers went “fowling” and came back with “fowl.” For all we know, he could have meant cardinals, but there is a chance turkeys made their way onto the table in 1621.

What we do know for sure is that shellfish played a way bigger role in the first Thanksgiving than turkey. Pilgrims relied heavily on fish, thanks to the teachings of Squanto. We know they had cod, bass, and other fish. They may also have had mussels and lobster.

The harvest is what this thing was all about, but we know very little about it except that it contained “Indian corn.” Historians believe this was most likely crushed up into cornmeal and made into porridge. There are many grinding stones used by the natives in the area, so it is likely the natives taught them this trick. Other crops likely included gourds, turnips, carrots, beans, spinach, and lettuce. There were definitely no potatoes of any kind. Sorry, spud lovers.

Lastly, there may have been some local fruit on the table. Cranberries are common, so traditionalists can keep their cranberries. There were also grapes (native grapes are terrible, so go for something store-bought), blueberries, and raspberries. The Pilgrims lacked butter, flour, and even ovens, so they didn’t bake pies. 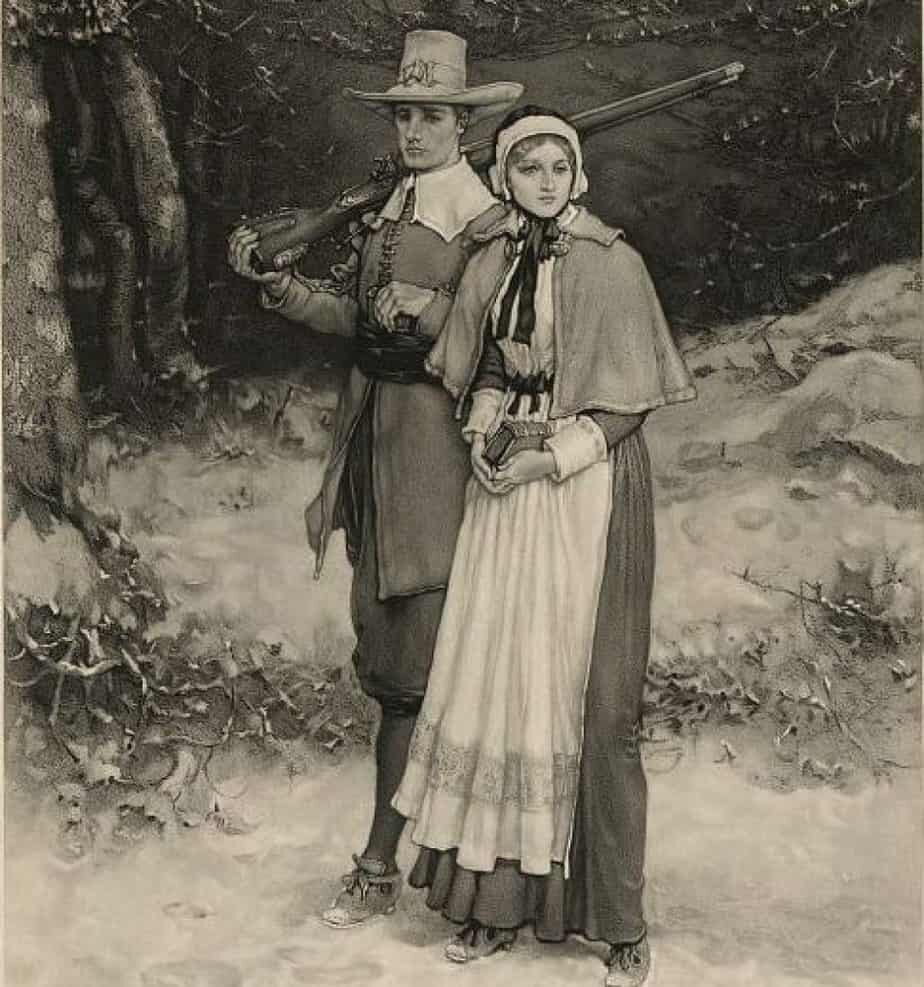 Engraving from 1884 showing typical pilgrim attire on husband and wife on their way to church. Source: Library of Congress.

We have a specific picture of Thanksgiving, largely due to paintings, movies, and our education. This picture is of painted savages with feathers poking out of their headdresses eating with a bunch of people looking like they are ready for a funeral. The truth is not completely different, but it is different enough.

Clothing Made From Skins

Most of the clothing the Wampanoag wore they made from deerskin. They wore deerskin breechcloths, which you may be able to visualize as loincloths featuring a butt flap as well. Women wore deerskin skirts held up with belts. Most young boys ran around naked until they were about 10 years old.

In the winter, people wore mantles, which were deerskins attached at the shoulder, wrapped around the body, and sometimes secured with a belt. They did paint their faces using red, yellow, black, and white face paint. Sometimes they sported tattoos and wore jewelry made from shells, feathers, and glass beads. They even brightly painted their clothing. Some special and brave warriors were awarded a prized eagle feather, which they wore proudly in their headdresses. However, the giant plumage of feathered headdresses often seen in artistic depictions of the first Thanksgiving was probably embellished by the artist.

The Pilgrims dressed rather similarly to the depictions we see of them. They wore heavy wools and linens. Most of their children wore dresses at a young age, so boys and girls were indistinguishable. They all wore aprons; men preferring short, leather ones. The caps and hats were typical as well, though the buckles on every male costume of the era are overkill. They were not leprechauns. The biggest difference is the color. Black was a difficult color to dye clothing. The clothes were usually grey, white, blue, or brown. They reserved black for finery. Therefore, the Pilgrims were not as colorful or naked as their native friends were, but they were not in funerary attire, either.

The conclusion is what we learned about Thanksgiving is not a total disaster. Just try not to run around with feathers on your head eating potatoes if you want historians to take you seriously.