Built in 1899, the Flannan Isles lighthouse was the scene of three mysterious disappearances roughly one year after construction. Three men vanished without a trace. There was no sign of a disturbance and very few clues to the nature of their fate. The scene was reminiscent of that aboard the Mary Celeste when her crew and passengers famously disappeared roughly thirty years before. 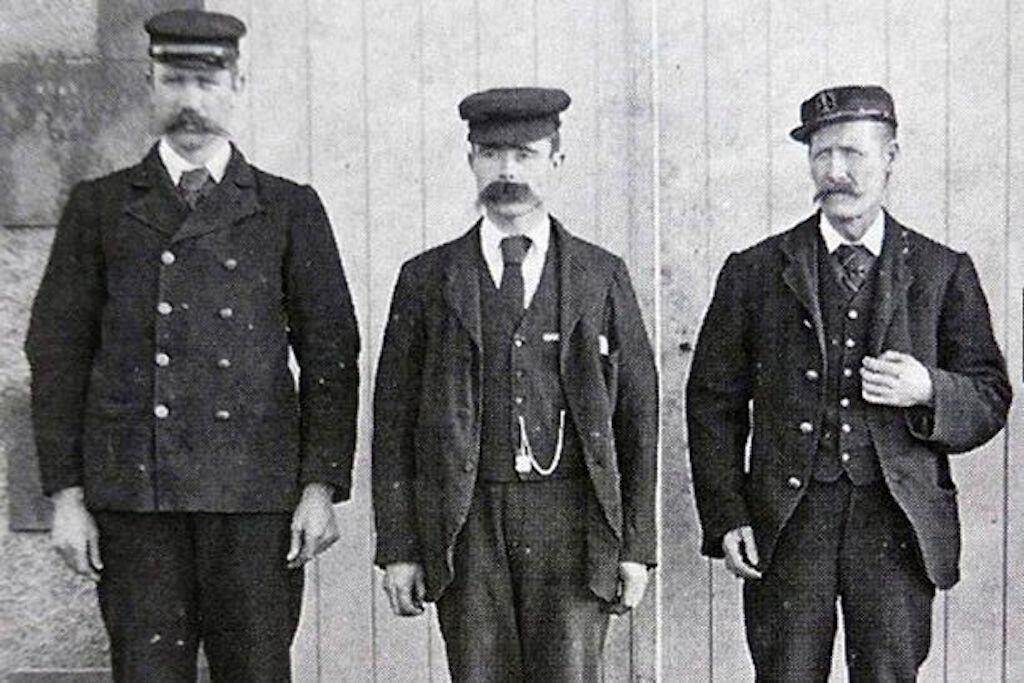 On December 7, 1900, Donald MacArthur, Thomas Marshall, and James Ducat arrived at the Flannan Isles lighthouse to begin their two-week rotation as keepers of the lighthouse. The Superintendent of Lighthouses, Robert Muirhead came with them to do a routine check of the lighthouse and speak to the men. He made certain that everything was in working order. He then spoke with James Ducat about some difficulties they were having with the heavy mist that commonly surrounded the island. The men then said goodbye to the Superintendent and he left.

The ship that was to deliver the men’s relief and bring them home from the Flannan Isles lighthouse was delayed until December 21, because of a run of bad weather. When the ship, the SS Hesperus, arrived at Eilean Mor, the men on board expected to see a flag flying to indicate that the keepers had noted their arrival and would be deploying a rowboat to retrieve their relief. However, the flag was not flying, nor did the men respond to a siren. A landing craft with two men on board was launched from the SS Hesperus with two men on board. 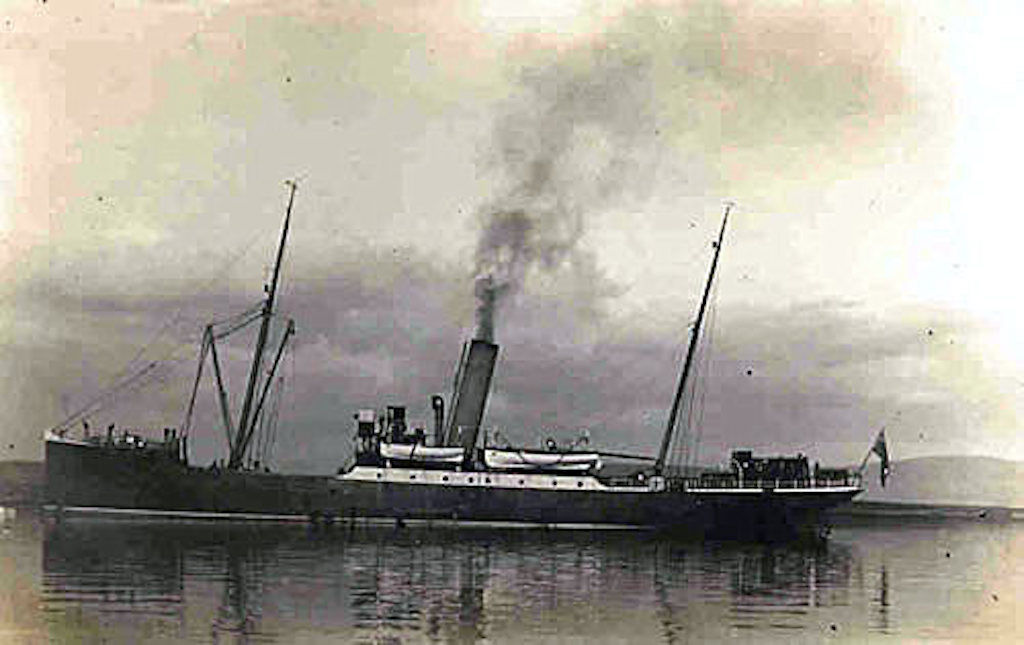 When the two men reached Eilean Mor, one man, Joseph Moore, went up to check the lighthouse for the three missing men. He found the entrance locked. He unlocked the door and entered to find the Flannan Isles lighthouse unmanned. The clock on the wall had stopped. No fire was in the grate, nor had one been there for a few days. Oddly, there was a meal sitting at the table. It looked like someone had set it down with the intention of eating it soon, but left it untouched. 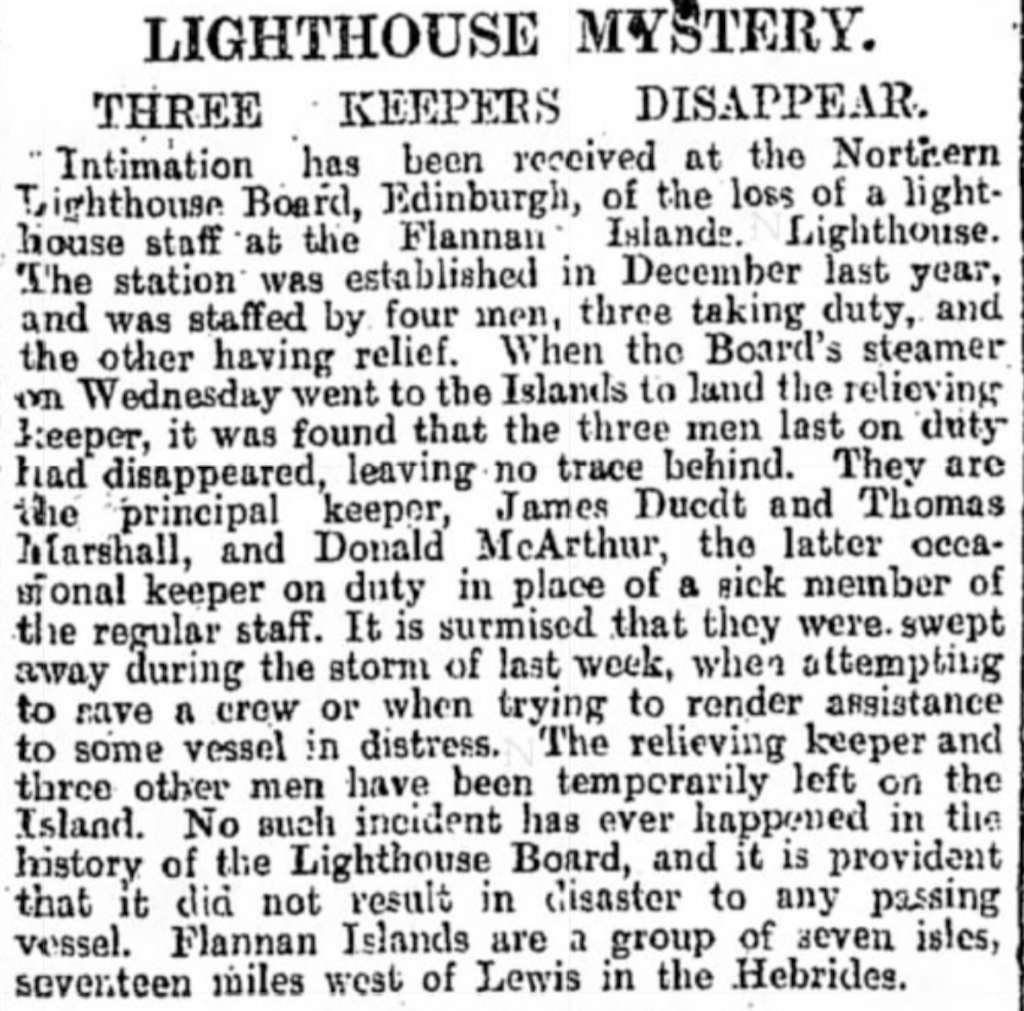 Whatever had happened to the men, it happened to them suddenly. There was nothing anyone could do about it with so few clues. So four men, including Moore, stayed on the island to operate the lighthouse while everyone else left.

What is Believed to Have Happened

The records of the three Flannan Isles Lighthouse Keepers were subsequently inspected. It was discovered that Eilean Mor was hit with a strong storm on December 14. The last entry was made on the afternoon of December 15. It simply stated:

Storm ended, sea calm. God is over all.

Superintendent Muirhead concluded that the men must have been taken by nature when they left the lighthouse to repair storm damage to a storage container outside. One of his theories (the most likely) was that a large wave came upon the men while they were working and swept all three of them into the Atlantic Ocean, where they died.

Muirhead’s theory is largely regarded as truth. The only other alternatives seem to be that the men left of their own accord, they were kidnapped, or some other ludicrous speculation. Unfortunately, the bodies were ever recovered, so there is no way to be sure.