In 1996, the alternative historian Barry Brailsford drew the world’s attention to the Kaimanawa wall in New Zealand. The curious structure lies in the Kaimanawa State Forest, south of Lake Taupo on North Island. A tremendous amount of controversy erupted surrounding the wall after Brailsford and David Childress claimed that the wall is man-made and pre-dates Maori colonization of New Zealand by about 1200 years. Such information, if true, would have rewritten the history of New Zealand. Additionally, there would have been complex and far-reaching political and financial implications for the local Maori tribes. 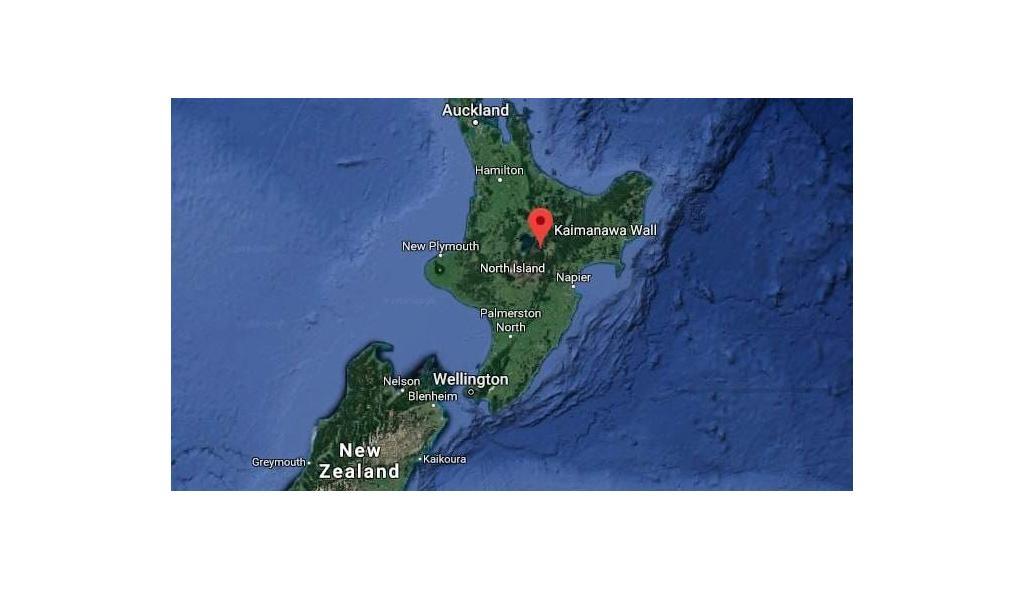 Brailsford is a native resident and history lecturer of Christchurch, New Zealand. David Hatcher Childress is an author on lost civilizations around the world and regular commentator on Ancient Aliens. The two men worked together to study the Kaimanawa wall in 1996. To the investigators, the workmanship reminded them of similar megalithic structures found in the Pacific and South America.

The stones consist of ignimbrite, a type of rock that results when pyroclastic pumice solidifies after a volcanic blast. The structure seems to bear the hallmarks of a deliberate construction with neat rows of stacked blocks. Precision joints and surfaces appear carved or sculpted. The most heated area of contention about the wall is its age. If someone built the formation around 2000 years ago, then a mysterious group of people must have settled New Zealand before the first Maori. According to Brailsford, the structure proves the claim of the Waitaha of South Island that their people reached New Zealand before the Maori. 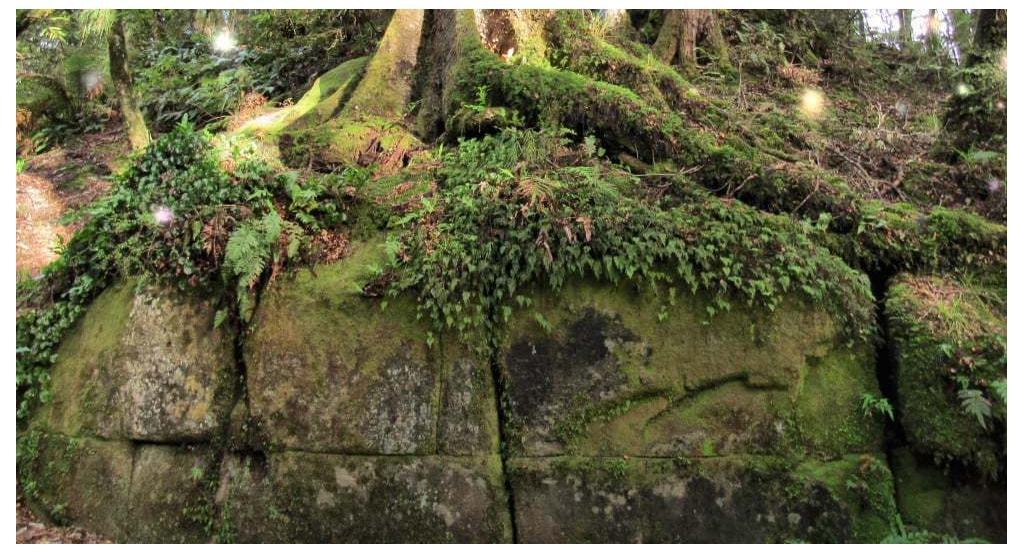 Some people believe the Kaimanawa wall is a 2000-year-old man-made structure that predates the Maori. Permission to use photo granted by The Wandering Witch.

The theory of pre-Maori civilization in New Zealand conflicts with the current understanding of the first settlements of the islands. Based on archaeological evidence, the first wave of Maori arrived sometime between 1250 and 1300 from Eastern Polynesia. Subsequently, other waves of Maori followed. The oldest official archaeological site and perhaps the very first settlement in the islands is located at the Wairao Bar on South Island. Scientists recorded about 2000 artifacts and 44 human skeletons and found that many of them originated directly from Eastern Polynesia.

Maori oral tradition indicates that their oldest ancestors who first arrived in New Zealand were the Waitaha (not to be confused with the Nation of Waitaha which will be explained later). The story indicates that subsequent Polynesian groups to arrive assimilated the Waitaha. Today, Waitaha descendants live on South Island.

To date, there is no official evidence of an earlier civilization, however, there are numerous unsubstantiated claims of sites and artifacts that pre-date the Maori. The first European to arrive was Abel Tasman in 1642. Because these islands are so remote, New Zealand was one of the last places that humans colonized – about 600-900 years after eastern Polynesians settled Hawai’i.

Three Theories About the Kaimanawa Outcropping

There are three general ideas about the wall, two of which have already been discussed. They are summarized here.

Much of the world heard about the wall only with the media frenzy that began in 1996. The magazine New Zealand Listener published an article, “Megalith Mystery: Are giant stones in the Kaimanawa Forest Park evidence of an ancient New Zealand culture?” The article provided Brailsford and his ideas a huge amount of publicity.

On the other hand, local tribes in the region had been aware of the rocky structure for a long time. As far as they were concerned, the outcropping was a natural formation that weathering processes had shaped over the centuries.

Can a Rat Solve the Mystery?

Another discovery alludes to a group that arrived much earlier than once thought. Richard Holdaway dated the bones of a Kiore rat at 2000 years old. Indigenous mammals did not exist in New Zealand. Therefore, the rat found its way to the remote lands only with the assistance of human mariners. Interestingly, the DNA of the rats show a close link to those of the Society and Cook Islands. Thus, experts generally believe that the Polynesians who came from that region of Eastern Polynesia to settle New Zealand transported the rats with them. If there were rats in New Zealand 2000 years ago, humans must have already found their way there. However, as with the stone wall, there is some controversy about Holdaway’s dating results which some scientists question. (Howe 2003).

Politics and the Kaimanawa Wall

In order to understand some of the political, social, and economic repercussions of the claims regarding the age of the Kaimanawa outcropping, a little backstory is necessary.

In 1840 the British Crown and Maori chiefs signed an agreement called the Treaty of Waitangi. This document outlined the stipulations and arrangments for the future political and social relationship between the two parties. However, when the Maori realized that the Crown had not adhered to certain points of the agreement, the Waitangi Tribunal emerged in 1975 as an inquisitional board to hear grievances against the Crown.

One of the purposes of the board was to make recommendations to the government regarding the validity of the claims. Another organization reviewed the recommendations and made determinations about settlements (compensations) which could come in various forms: money, land, or usage rights, for instance. The basis of the treaty and any entitlements stem from the premise that the Maori have indigenous claims to the land.

As a result of the treaty and compensations, a number of oppositional groups surfaced. Geoffrey Clark explains one aspect of the political/social quagmire:

“Within Maoridom there were schisms between groups and subgroups involving membership and aﬃliation, and uncertainty over the rights of urban Maori to access resources through the Waitangi Tribunal. Most of all, if Maori were enshrined as the indigenous people of the land then the non-Maori majority might be considered ‘non-indigenous’, a term that carries the negative environmental connotations of being foreign, exotic and invasive to the land” (Clark).

The very presence of the wall became a nightmare for both the New Zealand Government and local Maori tribes. The existence of pre-Maori settlers could, in theory, undermine the Maori status as “indigenous” and their claims against the Crown. In turn, this could complicate settlement compensations of which the Maori had previously been entitled.

After the two-week media frenzy following Brailsford’s announcement that the wall proves the existence of a pre-Maori megalith culture, the heated reaction of the Maori resulted in a government ban to the site. This stopped all investigations, but not before an official geologist had a chance to assess the structure.

The New Zealand Department of Conservation hired Dr. Peter Wood from the Institute of Geothermal and Nuclear Sciences in Wairakei to have a look at the wall to provide them with an objective opinion. Subsequently, Wood concluded that the rock formation was somewhere in the region of 330,000 years old and consisted of Rangitaiki Ignimbrite. What Brailsford had accepted as man-made cuts were a system of fractures that were a naturally occurring result of a cooling process of ignimbrite sheeting.

The following is an excerpted quote of Dr. Woods’ report about the Kaimanawa wall, as taken from a forum post on AboveTopSecret.

“The regular block shapes are produced by natural fractures in the rock. These fractures (joints) were initially produced when the hot ignimbrite cooled. . . . Near vertical and horizontal joints are common in welded ignimbrites of this type. The forces of erosion, gravity, earthquakes and tree growth (roots) probably have all contributed to the movement and displacement of the blocks over time.

The apparent regularity and ‘artificial’ aspect of the jointing is spurious. Most of the joints are not cuboidal. The eye is deceived mainly by one prominent horizontal joint which can be traced almost continuously along the outcrop into an area (recently excavated) where it is but one of an interlocking series of irregular joints.”

Perry Fletcher, a Taupo historian from the New Zealand Archaeological Association, and Paul Adds, a Victoria University professor, were among the harshest critics of the supporters of the pre-Maori civilization. In Fletcher’s case, he had been aware of the existence of the wall for decades. However, he never gave it a second thought. On the other hand, Adds firmly believed that those who were in favor of a “white people settled New Zealand first” theory were adhering to racist ideas. Additionally, he believed that such ideas ignored evidence that indigenous people are quite creative and resourceful.

The New Zealand Archaeological Association refused to comment about the Kaimanawa wall in the press. The reason they provided was that they did not feel it was an archaeological matter at all (Liston et al. 2011).

The controversy is ongoing to this day, and there are many sides to this story. The matter has only grown more politically complex. Since Brailsford and Childress first investigated the wall, both historians have written books and given pay-for seminars. In the late 1980s, Brailsford was instrumental in the formation of an additional tribe. They called it the Nation of Waitaha (an offshoot of the already-existing Waitaha, the first group of Maori arrivals). The Nation also has non-Maori individuals among its members.

“The Nation of Waitaha claimed to be the ﬁrst people in New Zealand and culturally distinct from later Maori arrivals, especially Ngai Tahu, which was portrayed as a warrior culture more concerned with securing economic assets from the Crown than with matters spiritual or environmental” (Clark). To some, the creation of factions and claims of indigeneity boil down to the financial settlements obtainable through the Tribunal.

Is This the Smoking Gun?

Unfortunately, the financial and political issues surrounding the Kaimanawa wall have muddied the uncertain and inconclusive reality of the outcropping. The most credible non-biased study suggests that it is merely one of the many amazing geological formations in New Zealand, like the Moeraki boulders or the hexagonal basalt columns. However, this certainly does not preclude the possibility of a pre-Maori settlement. This only means that the smoking gun might not be the Kaimanawa wall in Taupo.

Mono Lake and Its Sea of Natural Mysteries