When Howard Carter and his team finally found the tomb of King Tutankhamun in February of 1923, the scientific community celebrated. Everything was in such excellent condition. Centuries of grave robbers had never managed to find Tut’s final resting place, so the tomb promised untold treasures for the archeologists. But unbeknownst to them, there may have been more than gold in the tomb. Death and disasters struck a number of people who were involved with the grave, leading many to think that Carter unleashed a curse of King Tutankhamun’s tomb. 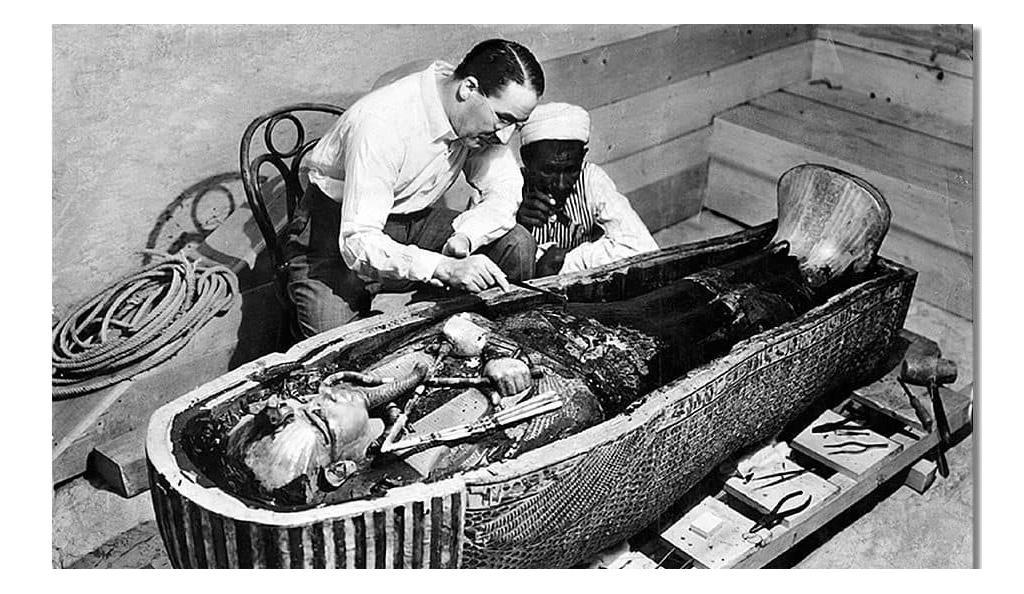 In some cases, a curse inscription actually appears on the walls of some of the Egyptian tombs. On the tomb of the ruler Khentika Ikhekhi are the words, “Whoever shall enter this my tomb…an end shall be made for him… I shall cast the fear of myself into him.” King Tutankhamun’s chamber walls had no ominous inscription, but many people believe in the curse of King Tut’s tomb, nonetheless.

Did the Curse of King Tut’s Tomb Cause Deaths?

In some versions of the curse, the first death after Carter opened Tutankhamun’s tomb was not even human. The story states that soon after the tomb was opened, a cobra slipped into the cage housing Carter’s pet canary and made quick work of the bird.

One of the first humans to feel the touch of the alleged curse’s power was one of the expedition’s financiers, George Herbert. He was bitten on the face by a mosquito and later opened that bite while shaving. One would expect this to be virtually harmless, but Herbert developed blood poisoning and died. Some say his dog died at the same moment as his master did.

Curse of the Hope Diamond

The curse spread wider. Another backer of the expedition died of pneumonia in the year of the discovery. Herbert’s half-brother died from a dental procedure gone wrong that same year. A noted Egyptologist who had interest in the tomb died of arsenic poisoning in 1928. All in all, at least ten mysterious deaths have been linked to King Tutankhamun’s curse at some point.

Not all of the cursed people actually died. A friend of Carter, one Sir Bruce Ingham, received a sacred object from the tomb and took it home. His house soon burned to the ground. He rebuilt it only to have it destroyed again, this time by a flood.

Skeptics put the deaths and calamities down to coincidences. They note that Howard Carter himself was not affected by the supposed curse when he would be the most likely candidate. However, he lived on for sixteen years after he opened the tomb of the most famous mummy of the century.

Ancient Egyptians were certainly not the only ones to place curses on their tombs. Many cultures in history have used magic in the form of spells or jinxed throughout time. These often served as a form of protection or even maliciously for the sake of injury. In the case of tomb curses, surely these served the purpose of protecting the dead and the grave goods inside from robbers.

Good friend for Jesus sake forbear, To dig the dust enclosed here. Blessed be the man that spares these stones, And curst be he that moves my bones.

Disturbing the tomb from any century is apparently not a good idea.

Sources:
National Geographic
The Curse of the Mummy