For 17 months in the mid-1980s, a criminal(s) named “The Monster with 21 Faces” terrorized Japan with blackmail letters and poisoned candies. The suspect(s) are part of the Glico Morinaga case and the police never caught the culprit(s). 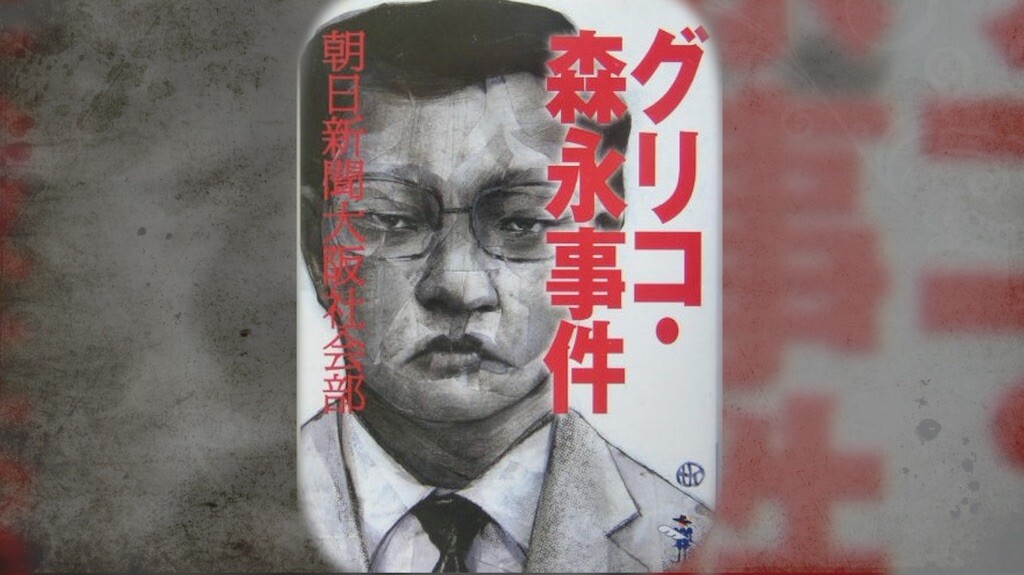 The Monster with 21 Faces

It all began on March 18, 1984, when two masked men kidnapped Katsuhisa Ezaki, the CEO of a confectionary manufacturer named Ezaki Glico. They took him to some warehouse and issued a ransom demand for 1 billion yen ($4.2 million) for his safe return. Fortunately, Ezaki managed to escape before the ransom was paid.

However, the reign of terror, now known as the Glico Morinaga Case, just started.

On April 10, 1984, arsonists torched several vehicles parked outside of the Glico headquarters and destroyed the surrounding area.

Although police were actively investigating the Ezaki kidnapping, authorities stepped up their investigations to find the person or persons responsible for the crimes seemingly targeting Glico and its employees.

Threats From The Monster of 21 Faces

On May 10, of the same year, Ezaki Glico received a threatening letter signed by “The Monster with 21 Faces,” stating packages of Glico candies had been laced with potassium cyanide. After some discussion, authorities decided to pull all Glico candies from grocery stores throughout Japan. The product removal was disastrous and resulted in a profit loss of more than $20 million and laid off more than 400 workers. 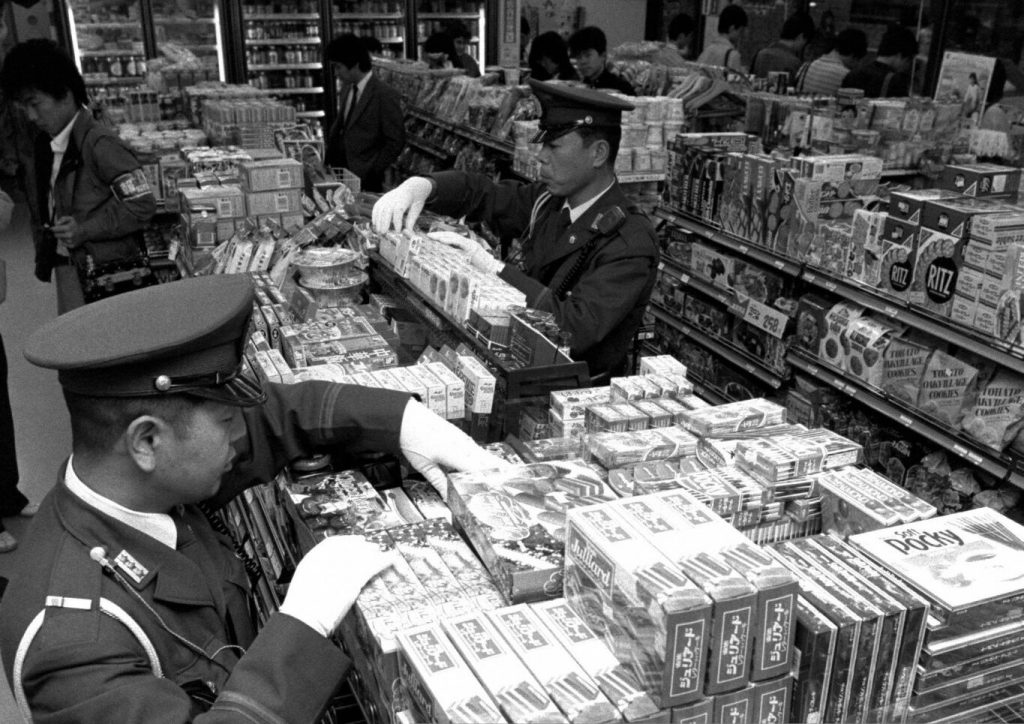 Police officers check Morinaga products on the shelf at a convenience store on October 26, 1984, in Tokyo, Japan. Photo by The Asahi Shimbun via Getty Images

The police had few leads. However, a security camera in a grocery store captured a man not affiliated with the store putting Glico products on the store’s shelves. The man wore a baseball hat and was difficult to identify. Also, the footage only showed one man, but the police knew there were two men involved in the kidnapping of Ezaki. The authorities did not know how many people they were looking for. 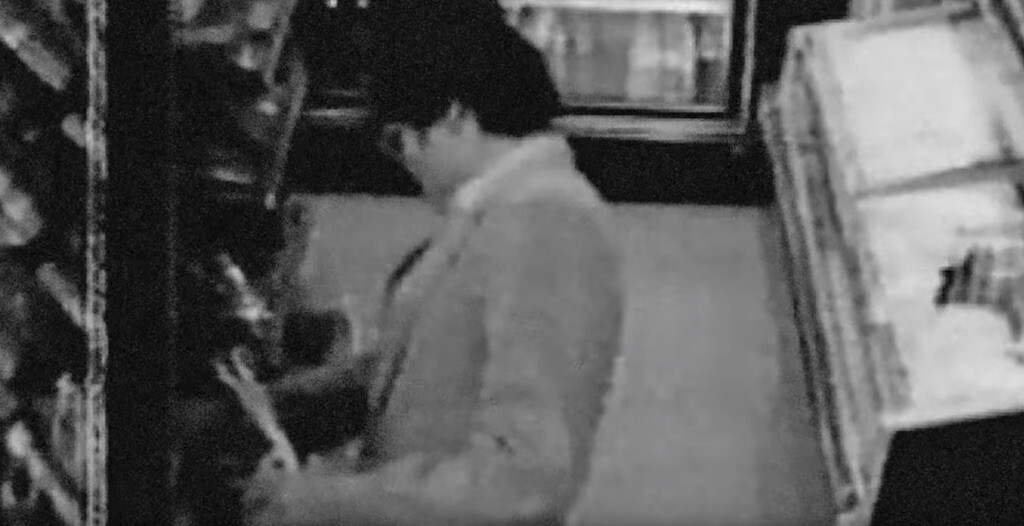 A security camera caught this mysterious man stocking Glico products on the shelf. He had no affiliation with the store or the products.

As time went on, the Monster widened the letter-writing campaign to include the media, in one letter saying:

Dear stupid police officers. Don’t lie. All crimes begin with a lie as we say in Japan. Don’t you know that?…. You seem to be at a loss….

All of Japan was terrified. Candy sales plummeted.

In the summer of 1984, the Monster expanded his/their ransom request activities to include the confectionery company Morinaga, along with Marudai Ham and House Food Corporation food companies. Police continued to track down the few clues they had but remained stumped until late June.

In that month, the Monster said he/they would put an end to his/their activities in exchange for 50 million yen. The letter demanded the ransom placed on a train heading towards the city of Kyoto. The presence of a white flag on the train signifies when to drop off the money. After gathering the ransom, and an undercover policeman boarded the train looking for the flag.

The policeman did not see a white flag but did notice a fellow male train passenger acting strangely. The policeman described the man as having an athletic build. The most remarkable feature noted about the suspect involved his “eyes like a fox.” Despite an effort to keep the man under surveillance, the suspect managed to elude an investigator in the Kyoto train station. Another attempted ransom drop in November was equally unsuccessful in capturing the culprit.

In October of 1984, the Monster sent the media a letter addressed to “Moms of the Nation.” In it, he/they stated that he/they had poisoned 20 packages of Morinaga candy with sodium cyanide and placed them on grocery store shelves. Police fanned out throughout the country and managed to recover more than 21 tampered packages containing poison. Interestingly, someone applied warning labels to the packages stating “Danger: Contains Toxins.”

In January of 1985, based on the previous store video footage and a description of the man on the Kyoto train, the police issued a wanted poster. Nobody came forward to identify the suspect. The investigation continued.

First Death Attributed to the Monster of 21 Faces

In August, the Monster of 21 Faces claimed his first victim, although indirectly. Pressured by the lack of an arrest and an investigation that was going nowhere, the police superintendent heading up the hunt killed himself by setting himself on fire. Once news of the suicide was reported, the Monster sent what would be his/their last letter to the media saying, in part:

(The police superintendent) died. How stupid of him! We’ve got no friends or secret hiding place…. What have (the police) been doing for the last year and five months? Don’t let criminals like us get away with it…. We decided to forget about tormenting food companies. If anyone blackmails any other food companies, it’s not us but someone copying us. We are bad guys. That means we’ve got more to do other than bullying companies. It’s fun to lead an evil man’s life….

Time went by, but police failed to make progress in tracking down the perpetrator(s).

Police officially closed the case. Even if the police caught the Monster of 21 Faces today, he/they could not be prosecuted. The Japanese statute of limitations for kidnapping and the poisoning of food products has expired.