The Iron Pillar of Delhi is nearly 24 feet tall and located in the Quwwat-ul Mosque at Mehrauli in Delhi, India. It weighs more than 6 tons and made of 98% wrought iron. It is thought that the pillar was crafted using forge welding. The pillar is ornate, but hardly awe-inspiring unless one knows just how long and mysterious the history of it is.

The Quwwat-ul Mosque dates back to 1192. It stands around the Iron Pillar in ruins, giving away its great age. The mosque is a relic of an Islamic India. The Iron Pillar dates back even further than the ruined Islamic building that surrounds it. But the iron pillar gives away nothing of its age at first glance. It was forged 1,600 years ago (sometime in the 300s) and moved to Delhi roughly 1,000 years ago before the mosque was built.

How Old is the Sphinx? Examining the Evidence

An iron pillar that old should have fallen to dust and blown away with the breeze long before now. Nonetheless, the Hindu-made pillar stands strong above the Islamic ruins which will fall to dust long before the pillar does.

According to a popular translation of the Brahmi script upon the Iron Pillar of Delhi, the pillar was made for a king. The king is presumably of the Gupta period, given the era of its creation. It was also made to honor one of the most important Hindu gods – Vishnu. For which Gupta king the Iron Pillar was made for is not made clear in the inscription. However, it is widely believed that the inscription refers to King Chandragupta II who reigned from circa 375 to 415 CE. 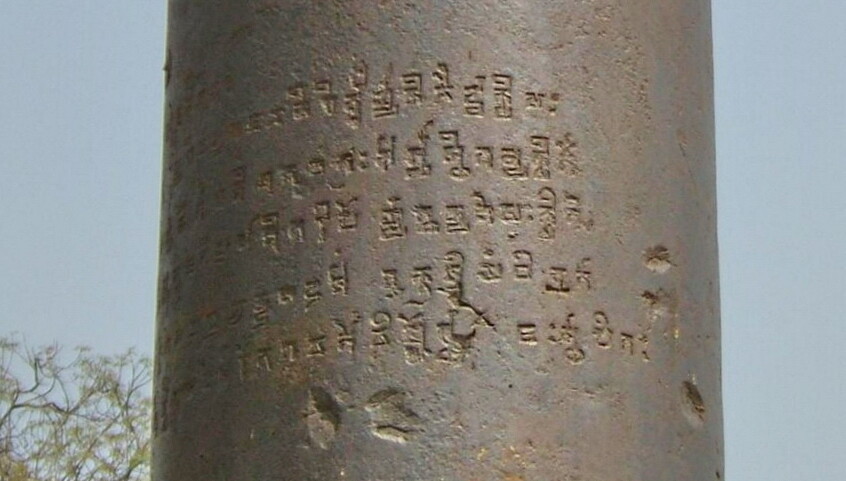 A close up of the inscription on the Iron Pillar.

He, on whose arm fame was inscribed by the sword, when, in battle in the Vanga countries (Bengal), he kneaded (and turned) back with (his) breast the enemies who, uniting together, came against (him);-he, by whom, having crossed in warfare the seven mouths of the (river) Sindhu, the Vahlikas were conquered;-he, by the breezes of whose prowess the southern ocean is even still perfumed.

He, the remnant of the great zeal of whose energy, which utterly destroyed (his) enemies, like (the remnant of the great glowing heat) of a burned-out fire in a great forest, even now leaves not the earth; though he, the king, as if wearied, has quit this earth, and has gone to the other world, moving in (bodily) from to the land (of paradise) won by (the merit of his) actions, (but) remaining on (this) earth by (the memory of his) fame.

By him, the king, attained sole supreme sovereignty in the world, acquired by his own arm and (enjoyed) for a very long time; (and) who, having the name of Chandra, carried a beauty of countenance like (the beauty of) the full-moon,-having in faith fixed his mind upon (the god) Vishnu, this lofty standard of the divine Vishnu was set up on the hill (called) Vishnupada.

Why Was it Built?

The purpose of the Iron Pillar of Delhi is one of its many mysteries. Some say it was a flagstaff made for the king mentioned in the inscription. Others say it was a sundial at its original home in Madhya Pradesh. Why it is no longer in Madhya Pradesh is yet another mystery. There is no evidence of who moved the pillar 1,000 years ago, how it moved, or even why it moved.  All we can say for certain about this aspect of the history of the pillar is that it has been part of the Delhi landscape for a very long time.

How has it seemingly remained untarnished for this long? The pillar does not seem to rust. Although we now know this is not entirely accurate. It is certainly in unbelievable condition for its age. However, it is not without rust. There is a small amount of rust beginning to appear on the pillar. This does not make the pillar’s condition any less mysterious. As mentioned above, it should not even exist anymore. So, how does it withstand the years? Answering that question is not easy. 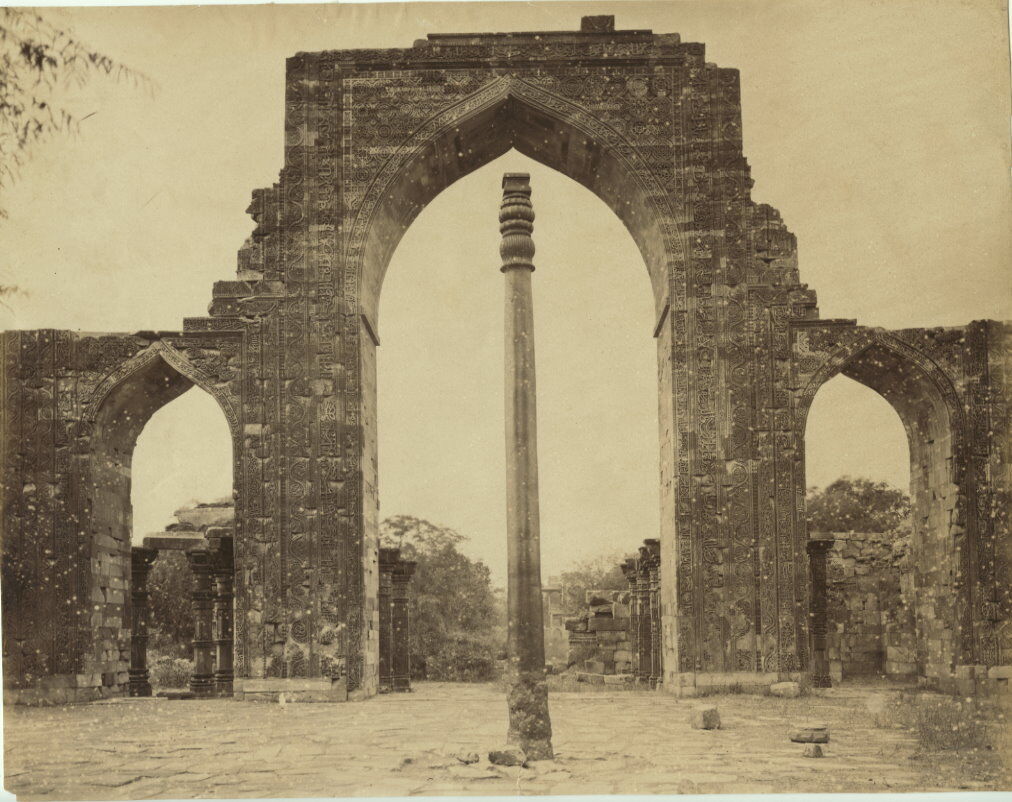 A John Edward Sache photo of the pillar in the 1880s.

Possible Explanations for its Conservation

One of the main catalysts for rust is humidity and Delhi is not very humid. This could be one of the factors in the natural preservation of the Iron Pillar of Delhi. Other possibilities include the skill of the men who made the pillar, the quality of the materials used, and the fortuitous conditions that caused a protective layer to appear on the pillar.

A study conducted in 1963 by M.K. Ghosh of the National Metallurgical Laboratory suggests the pillar’s construction included hammering lumps of hot iron, one at a time, to shape it. Each lump weighed 44 to 66 lbs each. A close look on the surface of the pillar shows the hammer marks of the forged iron. Ghosh opined 120 laborers took two weeks to create the pillar.

The low rust of the iron is probably due to the high phosphorus, low sulfur, low manganese, and high slag content of the forged iron.

The construction of the pillar is still a mystery. An analysis of the pillar itself, or rummaging through India’s rich history may eventually provide the answer.

The Great White Pyramid of China