Oldest Tree in the World Hidden in California’s White Mountains

It was 1953 when Dr. Edmund Schulman was exploring the Inyo forest as part of his study on ancient trees when he stumbled upon the Ancient Bristlecone Pine Forest nestling at a 10,000 foot elevation in the White Mountains of California. What his research subsequently unveiled was that Dr. Schulman had discovered the location of the oldest tree in the world known to man. 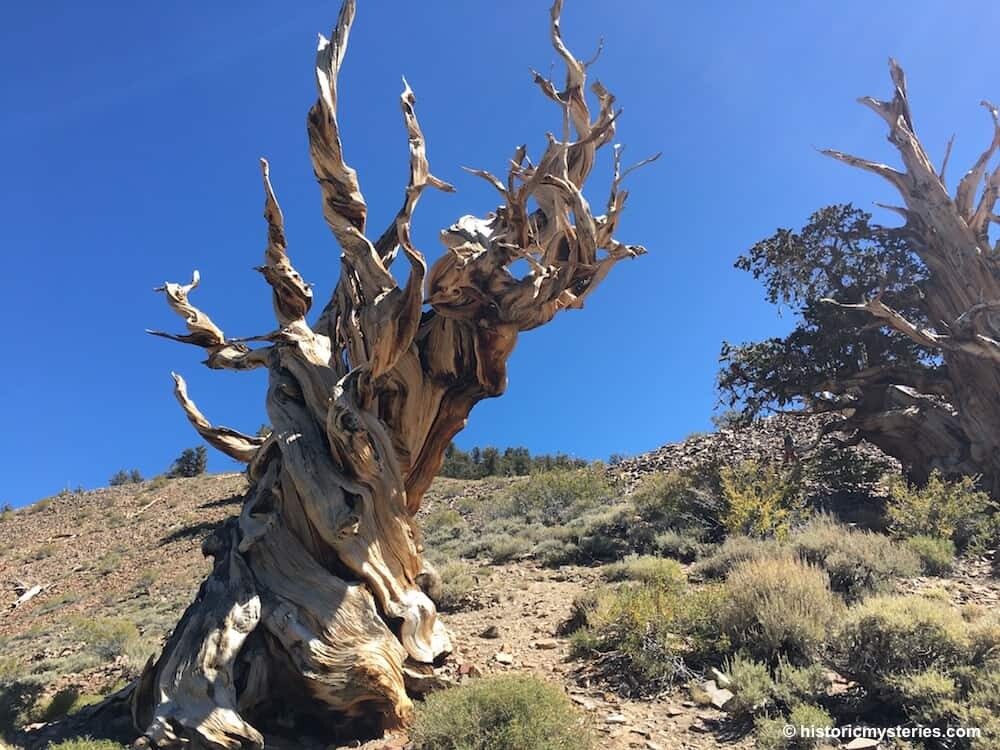 Appearances are deceiving. This bristlecone pine may appear dead, but it is very much alive. © historicmysteries.com

From his previous examination of giant Sequoia trees, Dr. Schulman assumed that the taller the tree, the older it had to be. But this belief was about to change. Dr. Schulman realized that when it came to these bristlecone pines, it was the shorter, twisted, and weather-beaten trees that were the oldest. 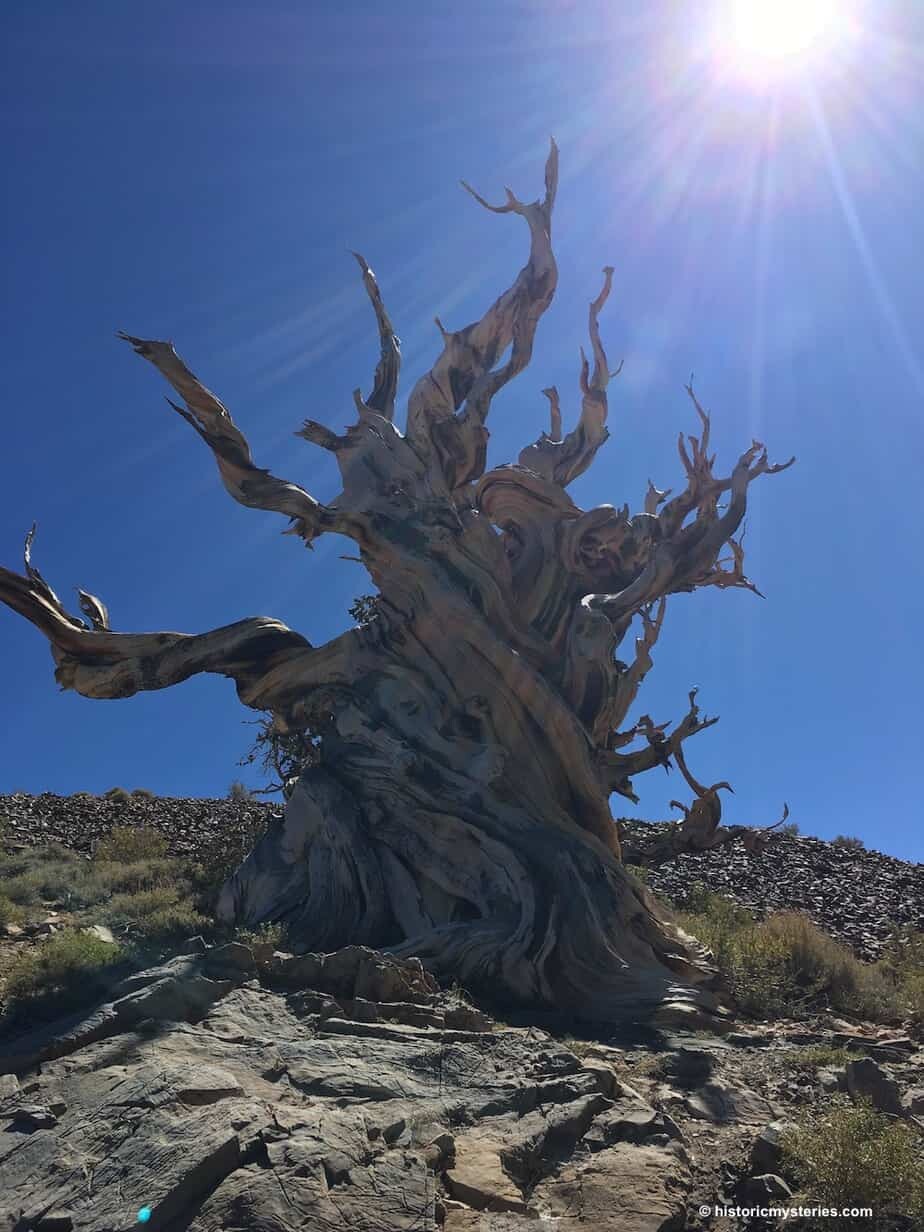 Don’t Let the Size Fool You

As a way to adapt to the extreme weather, these ancient bristlecone pines grew slower and denser. The dense wood also helped the trees withstand insect infestation and disease. Because of these protective measures, the twisted, gnarly bristlecone pines of the White Mountains are able to live a very long life. In fact, one of these trees within the forest is 5,000 years old. This hidden gem is the oldest non-clonal living tree in the world.

Discovery of the First Tree to Exceed 4,000 Years of Age 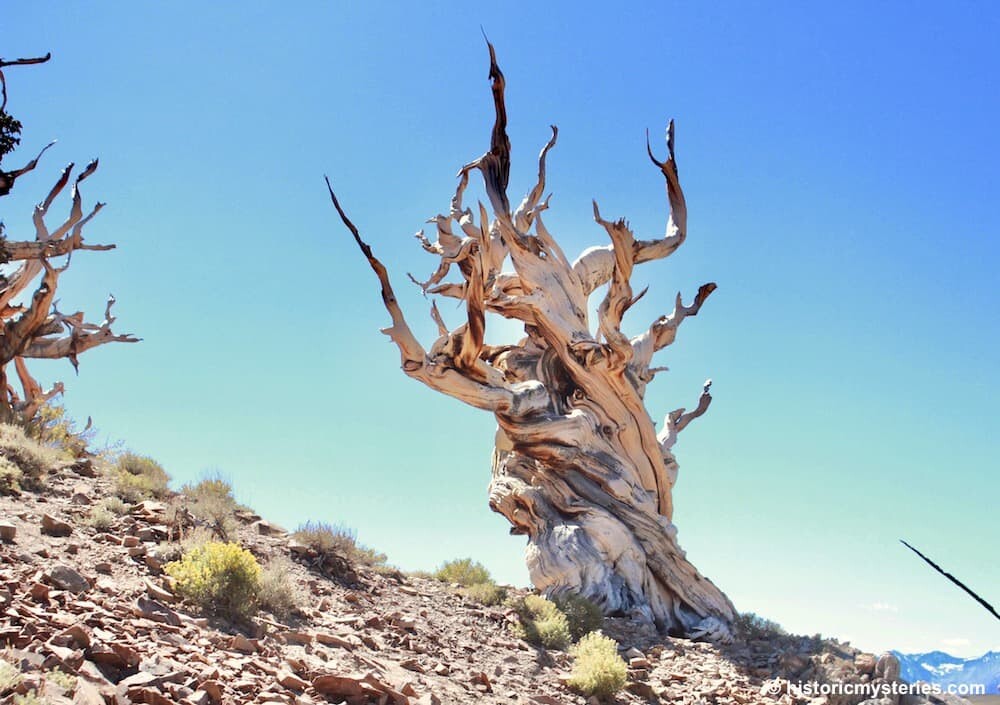 The bristlecone pines are located in an isolated and rocky area of the White Mountains, California. © historicmysteries.com

Dr. Schulman first became aware of his amazing discovery when he took some core samples of these strange looking trees. After returning to his base camp with the core sample, Dr. Edmund Schulman analyzed the core and began counting the tree rings. The importance of his discovery became apparent when his count of the rings indicated that the germination of one particular tree occurred prior to 2046 BCE. Dr. Schulman had just discovered the first non-clonal living tree that was over 4,000 years old.

The Oldest Tree in the World

Dr. Schulman named his most ancient tree Methuselah, after the man in the Hebrew Bible who became the oldest man to live. However, the Methuselah of the Hebrew Bible only lived to be 969 years old. Contrast that with the Methuselah tree that at the time was the oldest living tree in the world with an estimated age of 4,849 years. Later, Methuselah tree was overshadowed by an even older tree discovered in 2012 in the same general location. That tree acquired the title “the oldest tree in the world” and is also a bristlecone pine tree estimated to be 5,067 years of age. Amazingly, it’s still alive and well. To put this into perspective, this bristlecone pine germinated in 3050 BCE, approximately 500 years before the construction of the Pyramids of Giza. 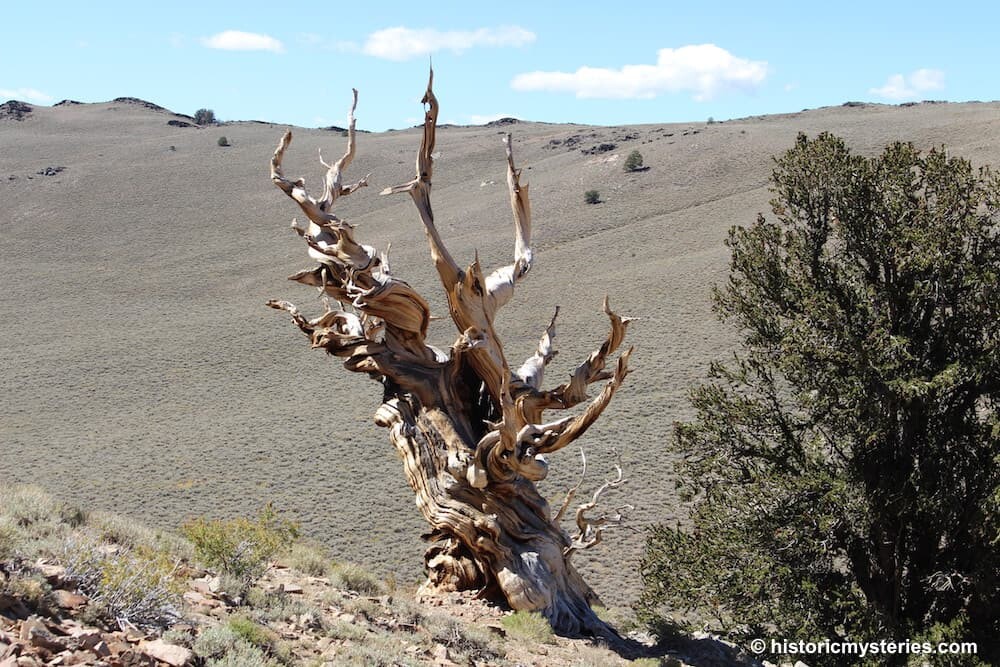 This bristlecone pine has been alive for over 4,000 years. © historicmysteries.com

In order to preserve and protect these trees, the location of Methuselah and its successor has not been disclosed to the public.

Oldest Clonal Trees in the World

Scientifically speaking, the oldest tree in the world is of a non-clonal type. Clonal trees derive from one single ancestor and are genetically identical to that ancestor. There are many clonal trees that are much older than our oldest tree in the world in the Inyo Forest. For instance, Old Tjikko is the name of a Norway spruce located in Sweden. It has been carbon dated to be 9,550 years old. But because it is a clonal tree, Old Tjikko is not the same tree as its ancestor that first germinated. Old Tjikko has regenerated new trunks, branches and roots over time. Older still are the “Quaking Aspen” clonal colony in Utah with roots that are estimated to be 80,000 years old. In fact, the Quaking Aspen is one of the oldest living organisms on Earth.

The White Mountains are composed of Dolomitic soil. Very few plants and vegetation can survive the alkaline soil. The deep rooted bristlecone pine trees thrive there because of this lack of competition.  Additionally, the light colored dolomite soil keeps the ground cool. The reflection of heat allows the bristlecone pine to absorb water that would have otherwise been lost to evaporation. 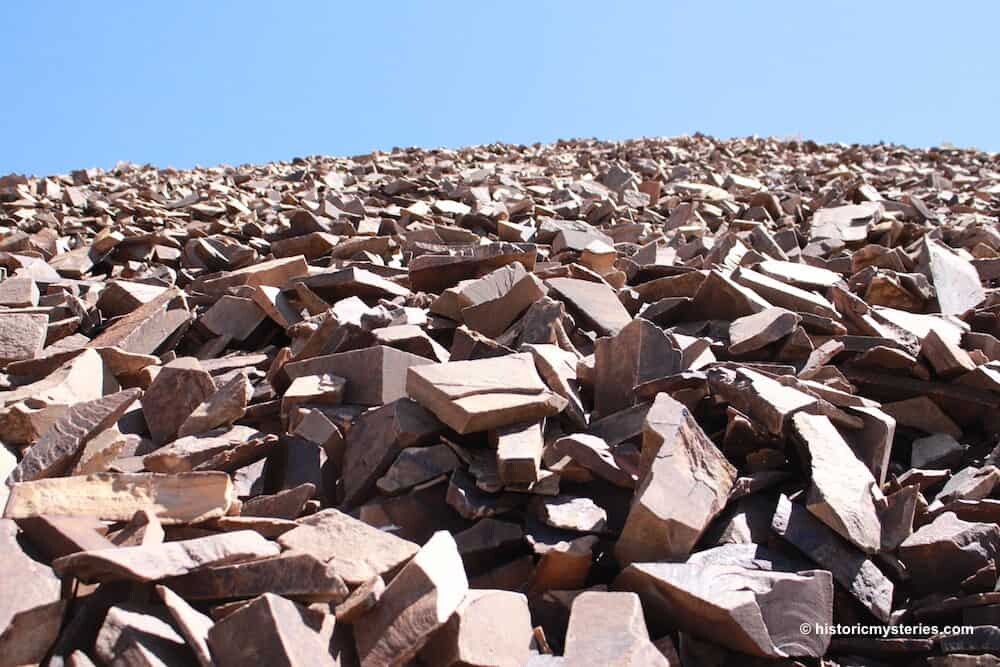 The mounds of quartzite on the White Mountains is evidence that this area was once a shallow sea. © historicmysteries.com

The White Mountains are also riddled with red quartzite rock.  Millions of years ago, this area was a warm, shallow sea that was uplifted over time due to tectonic plate activity. The sand, shells, and mud at the bottom of this sea eventually turned into quartzite rock due to this heat and stress. 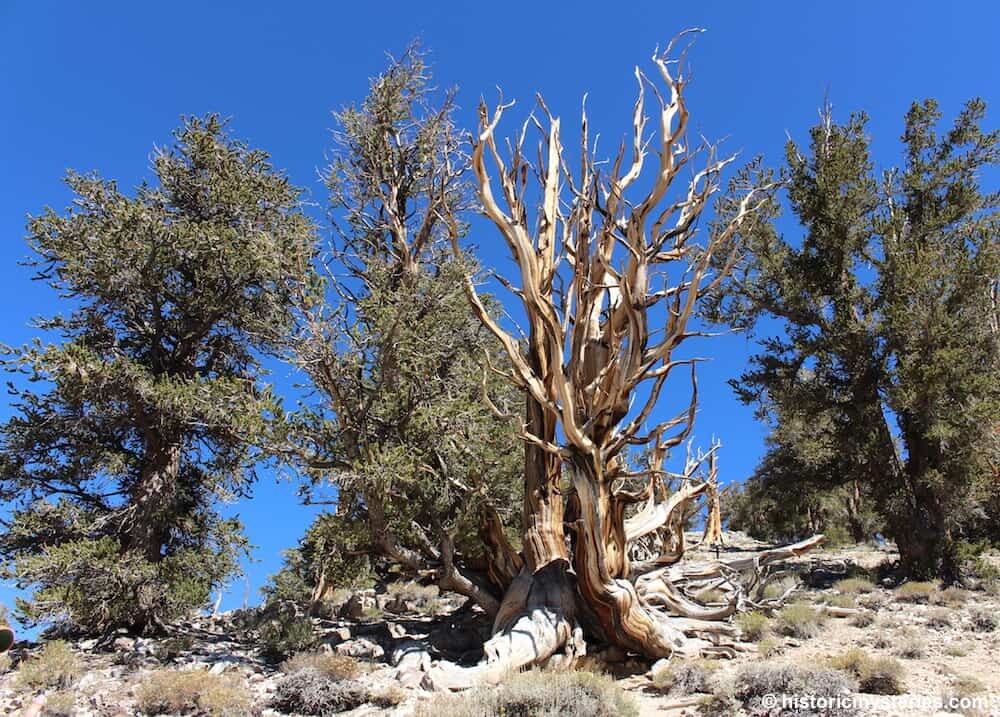 Soil erosion is the biggest concern when it comes to the health of these trees. In the photograph above, the root system is clearly visible. As centuries turn into millennia, the mountain soil eroded and exposed the softer roots to insects and disease. In this particular photo, the soil has eroded approximately three feet from its original height. A closer examination of the roots of the bristlecone pine can be seen below. 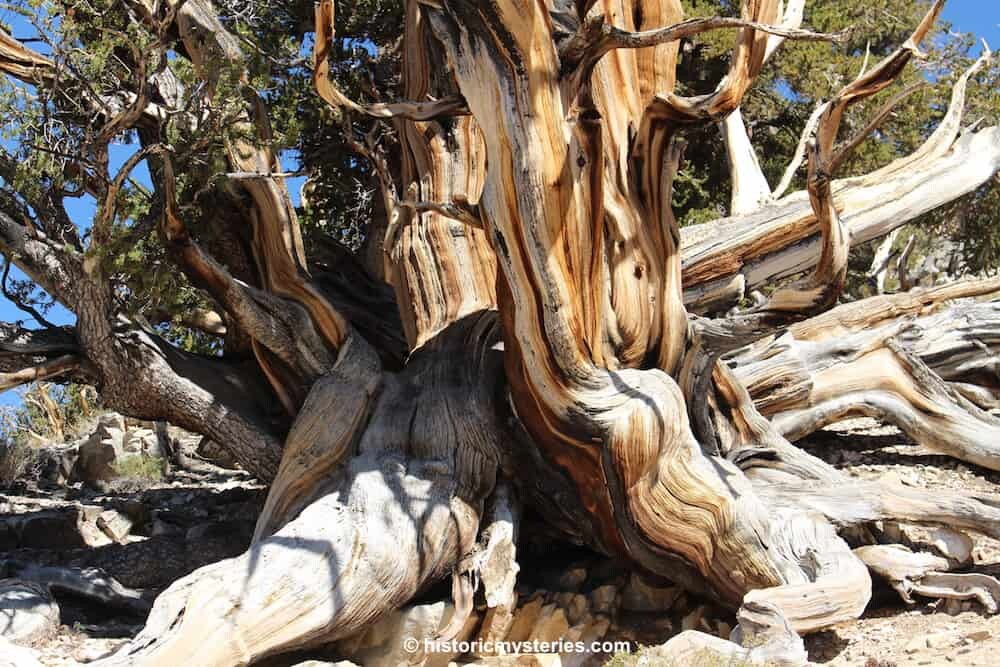 A closer look at the exposed roots of a bristlecone pine tree. © historicmysteries.com

A panoramic view of the Inyo National Forest. © historicmysteries.com

If you would like to visit the Bristlecone Pine Forest that contains the oldest tree in the world, it is accessible by car and located at White Mountain Rd, Verenigde Staten, CA 93514. Their phone number is: (760) 873-2400.

The Zone of Silence: Anomalies in the Mexican Desert