Strange and unique stone column formations decorate the desert landscape of Northeastern Bulgaria near the city of Varna. In some areas, the pillars stand like petrified trees. In others areas, limestone entombs up to five layers of the visible columns. Many people know of the ancient monuments as Pobiti Kamani, literally meaning the hammered stone. Others call them the Upright Stones, the Stone Forest, the Fossil Forest, or the Stone Desert. 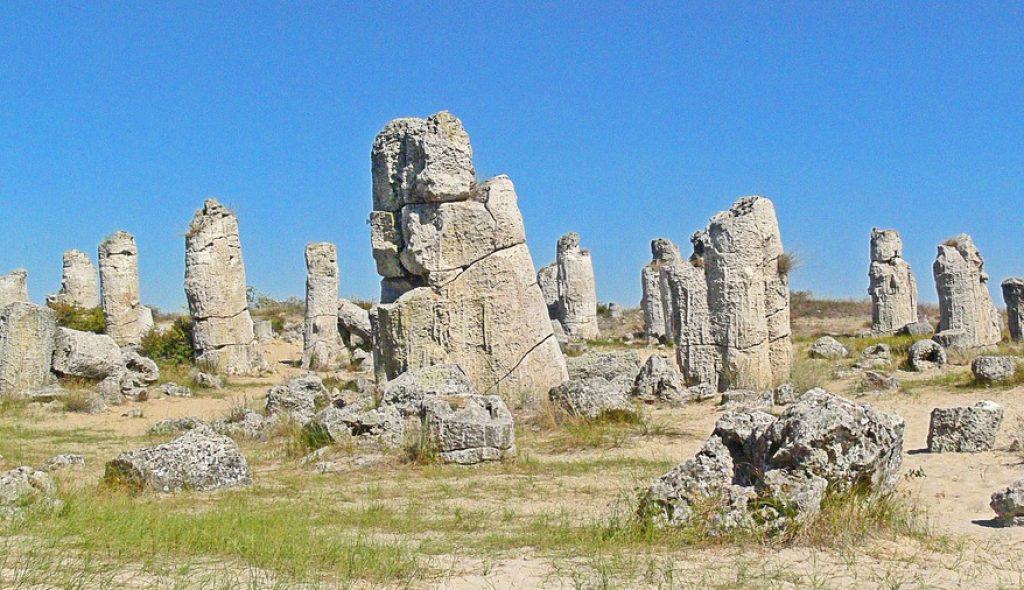 Many theories exist about the formation of the Pobiti Kamani including methane vents and mini atolls. Wikimedia Commons: Diego Delso.

There are 18 geological pillar sites spread out over a 27 square mile area along the Bulgarian Black Sea coast. Each site has a different number of individual columns or layers of columns stacked one atop the other. Perhaps the most interesting site is at a quarry in Beloslav, where 5 full layers of columns are visible including the seabed. Each layer is cemented together with a limestone cap.

Description of the Upright Stones

Looking at the landscape of Pobiti Kamani, one might think humans carved and set the columns into the ground as if to construct a Greek temple. However, the pillars are not manmade. They are geological calcareous columns that formed in the reefs of a shallow sea during the Eocene epoch. Some of the pillars are hollow, but others are not, and some researchers believe the hollow feature is probably a weathering phenomenon. Columns range in height from 3 to 10 meters and are .2-8 meters wide. They date back to about 50 million years before present. Exactly what caused these structures has been an ongoing debate for nearly 200 years.

The enormous stone columns are a unique natural phenomenon, which has no parallels in the World.

Bulgarian Ministry of Environment and Water 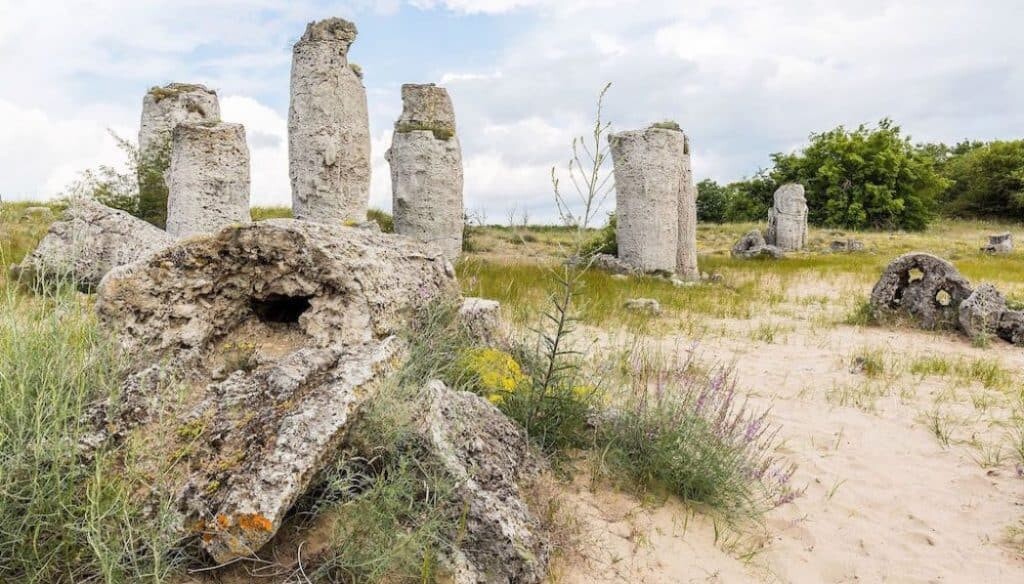 Some of the Varna stones are hollow, 2016. Wikimedia Commons, Diego Delso.

Scientists have proposed many different theories about the Pobiti Kamani stone forest. The first documentation of the formations came from a Russian archaeologist, Teplyakov, who went to Varna during the Russian-Turkish war in 1829. He referred to the structures as “columns of temples or palaces” and thought they may have belonged to an ancient population of mythical cyclops (Nachev & Sinnyovsky 2014). He did, however, take into consideration natural causes.

Another researcher, A. Margos, believed the pillars were actually a forest of petrified trees that rotted in sea water and had converted to stone. This theory didn’t explain the connected layers of columns and was subsequently disproven. More plausible theories involve a number of natural causes. They include methane or rainwater seepage and organisms, such as worms, coral polyps or algae.

The prevailing belief regarding the formation of the Pobiti Kamani stone forests involves methane seeping from the seabed along tectonic fault lines. Based on this idea, as methane surfaced through seafloor vents, bacteria oxidized the methane into calcium carbonate. Thus, tubes formed along the rising methane and grew into columns. Eventually, the lowering tides and weather erosion exposed the pillars.

However, Nachev and Sinnyovsky have something to say about the methane theory in their 2014 paper, Eocene Varna Reefs in NE Bulgaria. They present a number of valid arguments against methane and propose instead that algae and bacteria calcified to begin a process of creating mini atolls. Other organisms attached themselves to the atolls as well. Subsequently, over time a complex process caused the atolls to grow upward as the level of sand rose, with the atolls always staying just above the sand level. The centers were originally filled with sand. Once the pillars became exposed to the elements, the sand quickly eroded away leaving the appearance of hollow tubes that people often see today at the Pobiti Kamani stone forest. 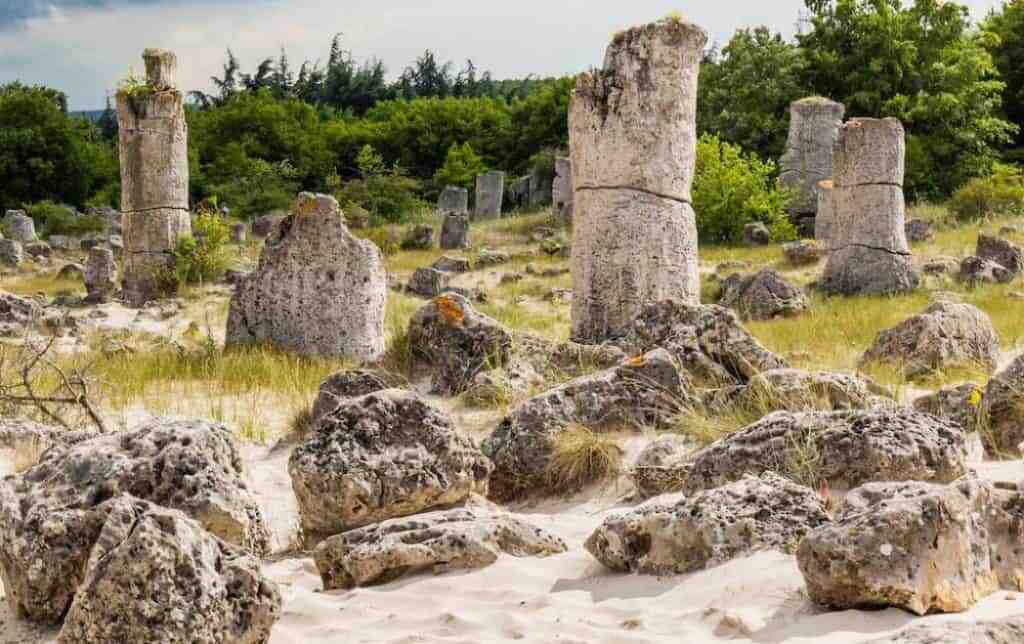 Many theories exist about the formation of the Pobiti Kamani including methane vents and mini atolls. Wikimedia Commons: Diego Delso.

Conservation of the Pobiti Kamani

Several protective orders have been issued since 1937, and the monuments are now classified as a “protected” area. UNESCO has the sites on their tentative World Heritage list, but researchers would like to see the Stone Forest become a National and European Geopark. This is because they possess a tremendous opportunity for scientific research and can offer many educational benefits.

In addition to a unique desert environment that houses many animals and protects a number of threatened plant species, the Pobiti Kamani stone forest is unique in the world. It is one of the few places where visitors can travel back in time to a get a glimpse of a 50 million-year-old Bulgarian sea.