Fatima, Portugal, was a small agricultural community at the start of the 20th century. People there lived simple devout lives mostly cut off from the rest of Portugal and the world. Today, Fatima is a popular tourist destination for Catholics who wish to see the “Our Lady of Fatima” Basilica. This change in popularity is due to events that reportedly took place on the site where the basilica now resides. In 1917, three local shepherd children claimed to see visions of the Virgin Mary, or as they called her, the “Virgin of the Rosary.” 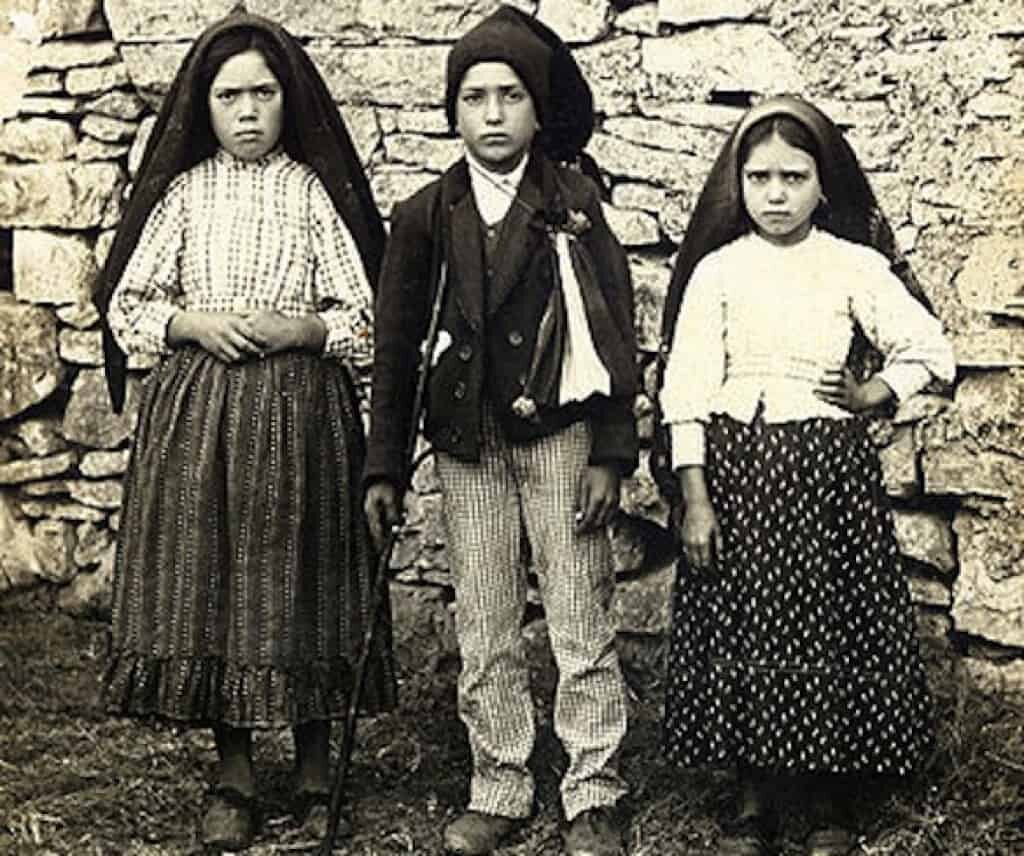 The Children of Fatima who claim to have seen the Virgin Mary.

The three children who said they saw the Virgin Mary and that she sent them visions were Lucia dos Santos, Francisco Marto, and Jacinta Marto. Lucia was the eldest (age 10) when the apparitions took place. Her young cousins, Francisco and Jacinta, were 9 and 7 years of age, respectively.

The children liked to play in a mountain cove known as Cova da Iria. It was there that they claim to have seen the Mother of God in Fatima. They first saw her on May 13, 1917. Over the next five months, they claimed to have seen her six times. They said that she gave them “secrets” that regarded the well-being of humankind. One of the visions the children claimed she showed them was of hell. That occurred on July 13, 1917. Lucia later described it as a “sea of fire.” She also said that they (the 3 children) saw demons and the souls of humans.

The “Our Lady of Fatima” visions culminated in the “Miracle of the Sun.” The Virgin Mary told the children of a miracle god would produce so that people would believe them. On October 13, 1917, the miracle occurred as the children predicted. The sun reportedly danced in the sky and came closer to the Earth for the benefit of spectators. It is said that tens of thousands of people witnessed the “Miracle of the Sun.” There were both Christians and atheists among them. Supposedly, atheists fell on their knees praying for God to forgive them when they saw the miracle.

Francisco died of the Spanish Flu when he was 11-years-old. His sister followed him one year later. Lucia, on the other hand, lived to be nearly one-hundred-years-old. She went on to become a nun and live a quiet life, with the exception of two things. She was urged by the Catholic Church to record the visions she had seen and to reveal her secrets. She did this. She also convinced Pope John Paul II to consecrate Russia and the world to the “Immaculate Heart of Mary” in 1984. She believed that this would keep god’s wrath at bay because this had been suggested to her by the Virgin Mary.

Lucia wrote the Virgin Mary had told them that it was god’s wish to make people devoted to Mary’s “Immaculate Heart.” In Fatima, she reportedly told them that WWI would end, but that another would begin while Pius XI was Pope if god’s demands were not met. She told them that God would warn humankind with light in the night sky. Then, he would bring destruction to the Earth. Many nations would be destroyed. Lucia said that an angel then appeared behind Mary with a flaming sword. The angel cried out for penance and the children were shown a vision of a Pope, Bishops, and priests being murdered by soldiers.

All of this would supposedly come to pass if Russia was not converted to Christianity. Lucia wrote that she learned in Fatima that “the atheist tyrants of Russia” would rule the world if this mass conversion did not take place. When Pope John Paul II consecrated Russia to the “Immaculate Heart of Mary,” he avoided this supposed crisis.

Believers flock to the “Our Lady of Fatima” Basilica because it is in a place where supposed miracles took place. It is a place where the Virgin Mary showed compassion to humankind by telling those three little children the secret to their salvation. Skeptics and those tyrannical atheists tend to think that these “visions” reflect the political climate of the time. Russia was not very popular with anyone, especially Catholics. The First World War was setting the stage for the 20th century and atheism was not something people were afraid to admit (in most cases) anymore. The “Our Lady of Fatima” visions touched on all of those threatening world changes.

Subhas Chandra Bose: The Life and Death of...

When Was Jesus Born and What Was His...

Belmez Faces: Mystery of the People in the...