Poveglia Island and Its Haunting History

Poveglia Island is a small dot of land in the Venice Lagoon off the eastern coast of Northern Italy. At times, it was used as a safe haven, military checkpoint, and an institution for people with mental illness. However, it is most well-known for its macabre use during the bubonic plague epidemic when victims were quarantined and burned on the grounds. Today, Poveglia maintains a frightening reputation, and locals believe this “island of ghosts” is riddled with unhealthy spirits due to its dark history. 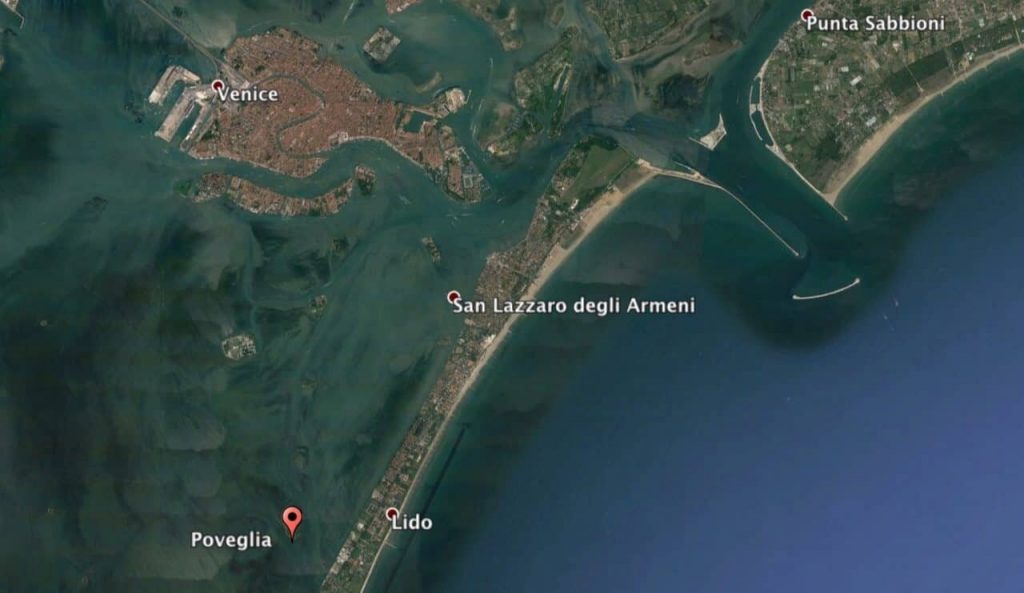 The little island was first mentioned in print in the early fifth century as a safe haven from invasions by Alaric the Goth and Attila the Hun during the decline of the Roman Empire. So numerous and easily defensible were the small islands in the lagoon, that military forces left them alone. However, Poveglia had probably been populated long before then, as historical records indicate that a group of proto-Italians, the Euganei, first inhabited the Veneto region as early as 2,000 BCE (Worcester Polytechnic Institute).

Around 864 CE, the governor, or doge, was killed, and two hundred of his slaves fled to the island and presumably led quiet lives. During the Chioggia War with Genoa that began in 1379, officials forced the residents of Poveglia Island to move to a different island in the Venetian Lagoon. They built the octagonal fort and turned Poveglia into a military outpost armed with naval artillery to strictly control the lagoon. 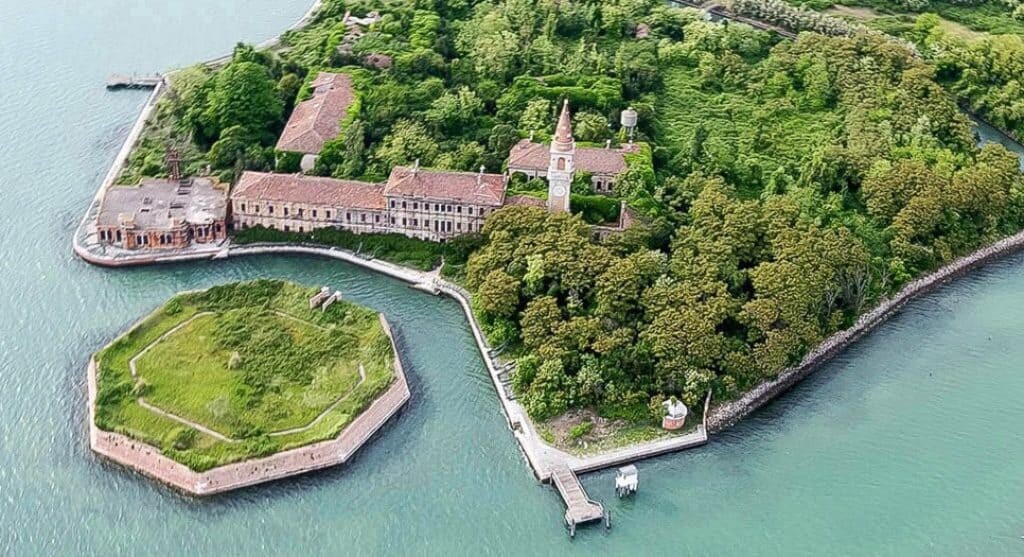 The Poveglia octagon served as a fort when the island became a naval post to protect against invasion. Source: factinteres.

For two centuries the island stayed unpopulated despite government efforts — such as one to have monks from central Italy inhabit the island in the 1500s. They found a purpose, however, when Poveglia Island became a colony and dumping ground for victims of the bubonic plague in 1576 and 1630.

The Plagues and Lazzaretti of Venice

The first major bubonic plague that struck Italy began in 1347 in Sicily and had spread to Venice by 1348. Roughly half the Venetian population succumbed to death. This taught the Venetians a great deal about the movement of the disease. They deduced, through observation, how the disease spread and how people and ships were introducing the plague to the area. Officials realized that they needed to separate the sick and dead plague victims from healthy individuals. Thus, they set up large burial pits for the corpses at two locations outside the main city.

See also: The History of the Venice Carnivale Mask

However, the number of dead bodies were piling up so rapidly that the two pits soon became overwhelmed. Thus, in order to manage the overflow, the city began to transport masses of dead bodies to two islands in the lagoon: Sant’Erasmo and the locality of San Martino de Strata (Venetzia.net).

In the early 1400s, the Venetians invented the concept of the lazzaretto. This is an institution or hospital designed for the quarantine of ill and potentially ill people. Lazzaretto Vecchio, a small island in the lagoon, was home to the first lazzaretto. During an excavation on the island, archaeologists unearthed more than 1,500 skeletal victims of the bubonic plague buried in pits. The scientists believe that there are still thousands more buried in the ground. 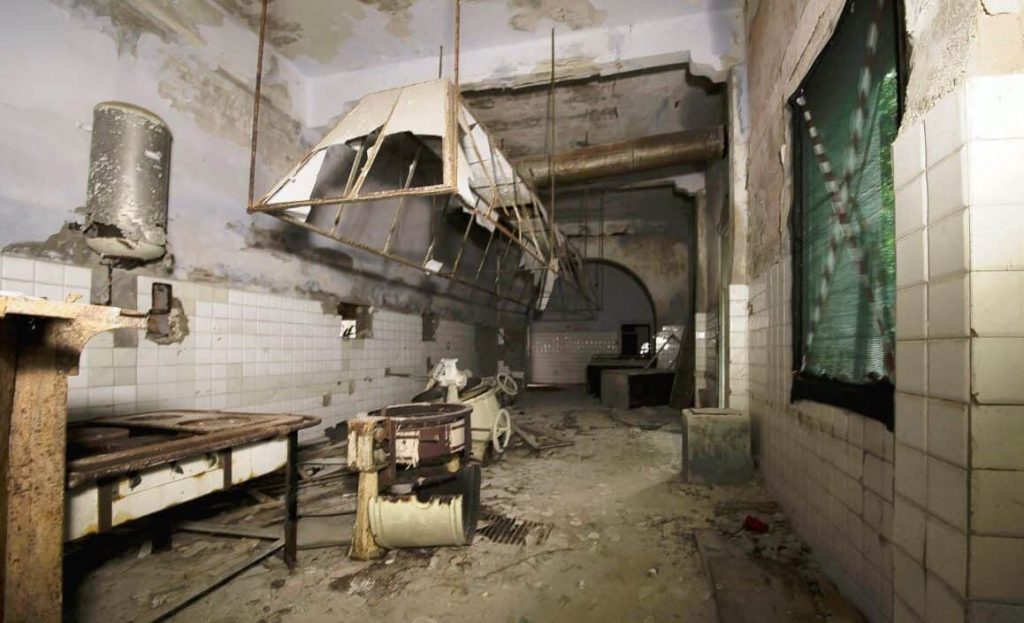 The sick lay three or four in a bed … Workers collected the dead and threw them in the graves all day without a break. Often the dying ones and the ones too sick to move or talk were taken for dead and thrown on the piled corpses.

During the following epidemics of the plague in the 1570s and 1630s, various islands, including Poveglia, served as quarantines and dumping grounds for masses of corpses. At times, barges were necessary to ship the bodies. Anyone stricken with even mild symptoms was quickly stripped away from their families and society and taken to the island. Once there, they spent up to forty days in quarantine where they either died or, rarely, recovered. Authorities incinerated thousands of bodies on Poveglia Island to prevent further spread of the disease.

In 1777, the Magistrate of Health took control of the island and turned it into a checkpoint. Any boat or ship heading into Venice needed to pass a rigorous inspection as a preventative measure against diseases. In the 1790s, two ships failed and officials found cases of plague on board. As a result, Poveglia Island became, once again, a quarantine colony for roughly ten years until the early 1800s when the hospital shut down.

An Institution for Mental Illness

In the early 20th century, the government re-purposed the island’s buildings as housing for the mentally ill. As time went on, sinister stories about the treatment of and experimentation on the patients filtered to the outside world. Some say the doctor committed suicide as a way to escape accountability for the grisly human experimentation he conducted on the patients. Other stories claim that the tormented souls who suffered on the island haunted him and that his only escape was suicide. Yet another version says someone or some entity pushed him off the tower. 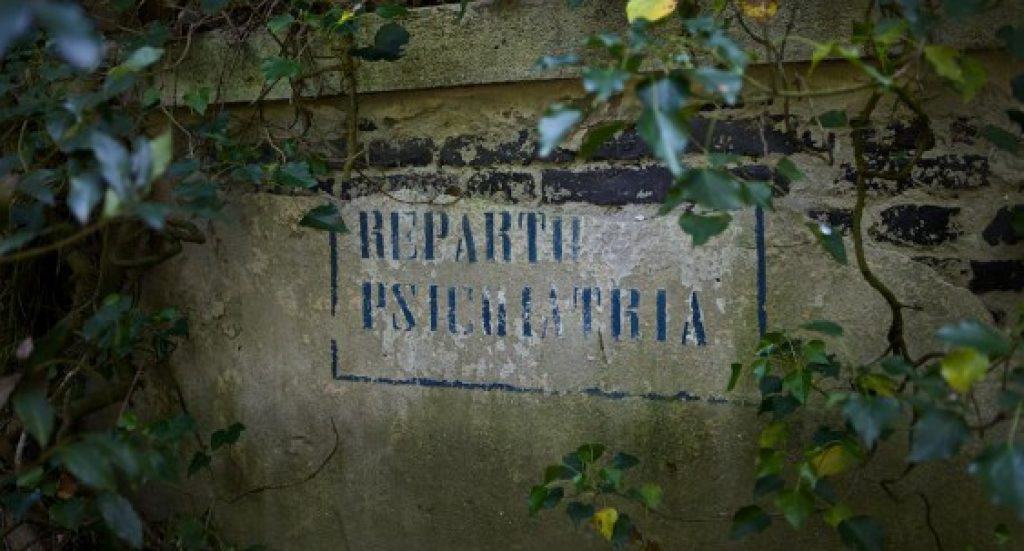 This sign that reads “Psychiatric Department” still remains in testament to the use of the hospital for mentally ill patients. Source: Venezia.net.

The patients and staff finally abandoned the island in 1968. It has remained unoccupied to this day except for, allegedly, a population of tormented ghosts. The remaining buildings — a hospital, church, and a shelter for boats — are crumbling away with time. 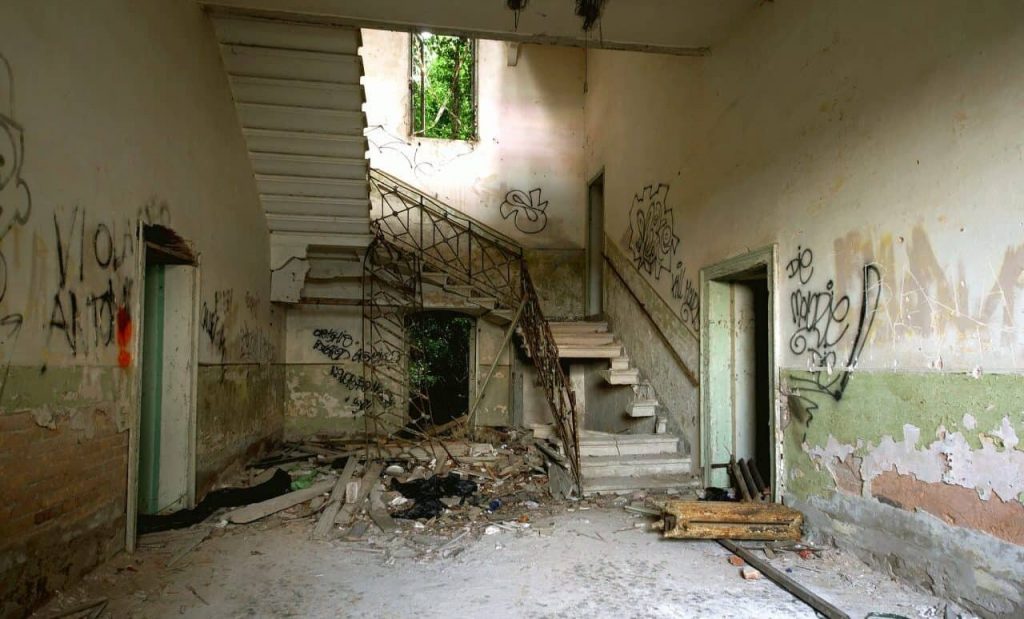 The government attempted to auction off the island in 2014. They were unsuccessful when the only bid they received was a mere $704,000.

Naturally, a site connected to so many methods of death has lived on in the popular imagination to this day. The TV shows Ghost Adventures and Scariest Places on Earth have featured the island. It has also been the subject of fiction and graphic novels.

In all likelihood, until Poveglia Island becomes suitable for businesses and residents once again, the area will continue to be a shadowy presence. For now, it remains one of the most haunted places on earth.

You may also like:
The Catacombs of San Gennaro of Naples