The Superman Curse pertains to a series of tragedies that have occurred to individuals associated with the Superman franchise. The list of victims includes George Reeves, Christopher Reeve, Margot Kidder, Richard Pryor, and many others. Skeptics of the curse claim they are just misfortunate coincidences. However, others disagree and believe something more sinister is at play. 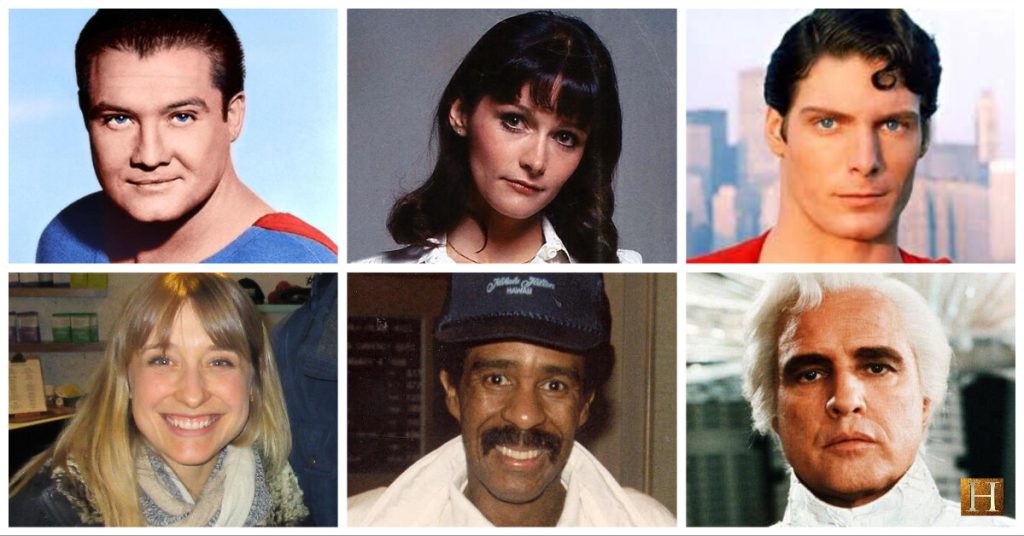 A collage of some of the victims of the Superman Curse.

DC Comics began life as Detective Comics. Nowadays, like Marvel Comics, it’s known for its abundance of superheroes such as Batman, Green Lantern, and Wonder Woman. During 1933 two friends, Jerry Siegel and Joe Schuster, combined their imaginations to come up with a superhero that single-handedly began the entire genre.

Five years after selling their idea to Detective Comics, Kal-El made his debut in Action Comics #1. He went on to not only save the world hundreds of times over but to dominate it. Quickly becoming an American icon and global phenomenon, Superman spawned an industry that covered everything from television to film franchises to merchandising

A 1942 photo of Jerry Siegel (standing) and Joe Shuster. They were the creators of Superman. Image: The New Yorker.

Even before the presses rolled on that first incarnation of the Man of Steel, misfortune was already at play. Both Siegel and Schuster sold more than just the idea to DC Comics. They sold the copyright itself and, for many years afterward, missed out on all the income that their original concept would create. While the pair did end up with royalties they considered they should have had, it took almost an entire lifetime to accomplish.

Their story may be a case of corporate exploitation and naivete. Siegel and Schuster were not the only hopefuls looking to turn an idea into a powerhouse juggernaut of a franchise. They were just among the handful that had the right ideas at the right time.

Did Jerry Siegel Create the Curse?

Is it possible that Siegel put a curse on the franchise? He certainly had reason to be bitter. He lost the copyright to Superman, which quickly became DC Comics’ most lucrative asset. When Siegel learned in 1975 that a Superman movie was in the works, he stated the following:

I, Jerry Siegel, the co-originator of Superman, put a curse on the Superman movie! …The publishers of Superman comic books, National Periodical Publications, Inc., killed my days, murdered my nights, choked my happiness, strangled my career…

Victims of the Superman Curse

Since the early days of Superman, a great many people involved with the legendary superhero have suffered some misfortune or catastrophe. This catalog of woe simply cannot all be written off as mere coincidence.

“I think the curse is nonsense. The reality is if you get any group of people, X number are going to have some sort of calamity in their life because that’s what life is.”

Critics of the Superman Curse inevitably insist the above instances are nothing more than merely a case of bad luck. Other actors involved in Superman productions have managed to avoid becoming another statistic.

Dean Cain has had a successful career after playing his version of the 1990s television Superman series Lois & Clark. The same is true of Teri Hatcher, probably even more so. More modern Supermen Tom Welling, Henry Cavill, and Brandon Routh have yet to taste any misfortune due to their involvement in Superman. The latter pair dismiss the idea of the curse outright.

Superman even appeared on Broadway. Bob Holiday, the star of the 1966 musical It’s a Bird, It’s a Plane, It’s Superman! states the notion of a curse is a silly one. He says his experiences have been highly beneficial and ‘nothing but good’. After his stint on Broadway ended, he became a very successful businessman in Florida until his retirement.

Fountain of Youth: In Search of the Mystical...