Sword in the Stone at the Monte Siepi Chapel

The Sword in the Stone is a story with ties to Arthurian legend. It is the tale of the future King Arthur, who pulled the embedded sword from the stone when no other man could. It is a legend that displays the mythical qualities bestowed on Arthur — his ability to do the impossible — and it is not the only Arthurian legend involving the seemingly unlikely retrieval of a sword. Of course, there are other legends that display Arthur’s weaknesses — particularly, Guinevere and Morgan le Fay. 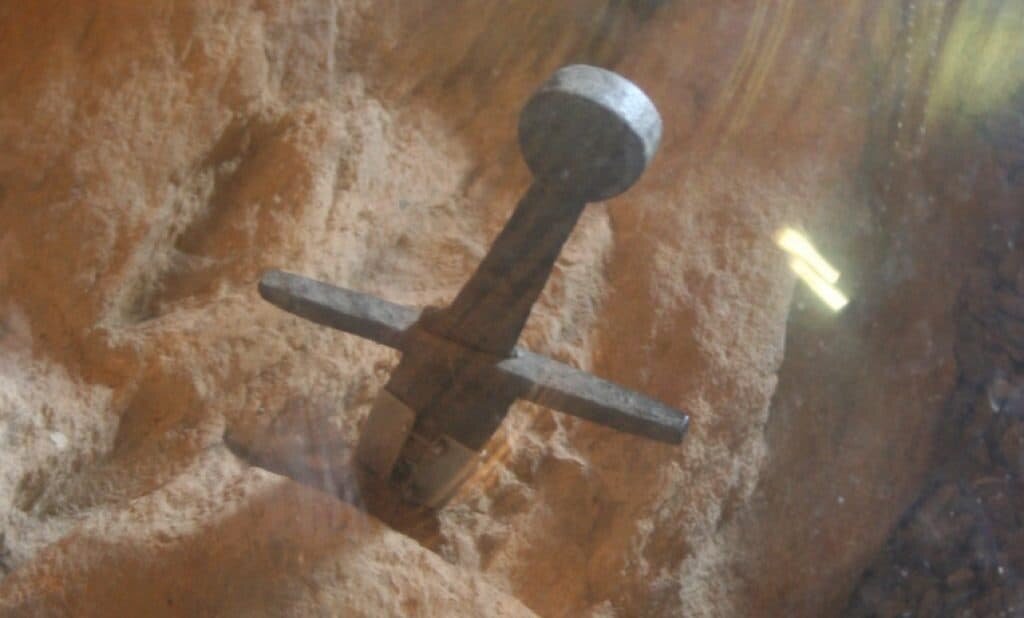 The Galgano Sword in the Stone by Adrian Michael.

The Real Sword in the Stone

Judging by a real artifact, the sword in the stone legend may be partially based on true events. No one pulled a sword from a stone and went on to become a king, as far as we know. In fact, the sword that exists in reality rather than legend is still stuck in its stone. However, there is no denying that such a sword exists. The stone and sword in question are located at Monte Siepi Chapel in the San Galgano Abbey in Tuscany. The abbey is in Italy and the history of it has naught to do with England. However, it may be the inspiration for this popular story. After all, how many swords in stones can there possibly be?

Related: Was King Arthur Real? What are the Clues to his Existence?

San (Saint) Galgano Guidotti was born in 1148 is allegedly the man behind the real sword in the stone at Siepi Chapel. Guidotti was a knight that was far removed from the knights of Arthur’s Round Table. He was a brutal and cruel knight, but he turned his life around in the end and become a saint. At the age of 32, Guidotti saw the Archangel Michael, who told him that he must end his life of sin and showed him the path to god. The year was 1180.

The Stone of Scone: Ancient Mystery of the British Isles

Galgano Guidotti did not initially abide by the angel of Heaven. He did not do as the angel suggested and commit to god. It was not until he was out riding one day that he was faced with the place of his salvation — Monte Siepi. Monte Siepi did not include the impressive abbey and chapel that grace the landscape now when Galgano found it. In fact, it was just a hill with some bedrock in it. There, something — a voice from Heaven, perhaps — told him again that he had to change. He replied that it would be as difficult as “splitting rock with a sword.” He then tried to demonstrate the hopelessness of his situation, but instead of breaking, his sword went straight into the rock. The story goes that Galgano used the rock with the sword in it as an altar for praying from that day forth. He died roughly a year after sinking his sword into the stone at Monte Siepi.

Galgano Guidotti was canonized by Pope Lucius III in 1185. That is a rather quick achievement of sainthood by today’s standards, but he is still officially a saint. Starting the year of his canonization, monks built a chapel around his sword and stone altar. Today, it overlooks the ruins of San Galgano Abbey from its site on the hill. The chapel still contains the sword in the stone, though it is now encased in plastic so people will not try to steal it, break it or become King of England with it. Legend has it that one such fellow was set upon by a pack of wolves when he tried to take the sword. There is a pair of mummified hands in the chapel. They supposedly belonged to the would-be thief.

The Shell Grotto of Margate is a Complete Mystery

While the sword may never have belonged to Saint Galgano Guidotti (this is still not entirely certain), one thing is certain, it dates from around his lifetime. If it did not belong to him, it belonged to someone else of his era. The mummified hands are from around that time as well. Therefore, there seems to be some truth to the story of the San Galgano sword in the stone.