Although the recent CT scan data pertaining to the death of Pharaoh Tut Ankh Amun seem to put to rest the theory that he was murdered, this may not be the end of the story.

Both Dr. Bob Brier and I along with other students of ancient Egypt believe that there are aspects of the final days of the life of the young king that may still need further exploration. In my review of the CT scan information, I attempted to make a case for accidental death as opposed to the result of military action. 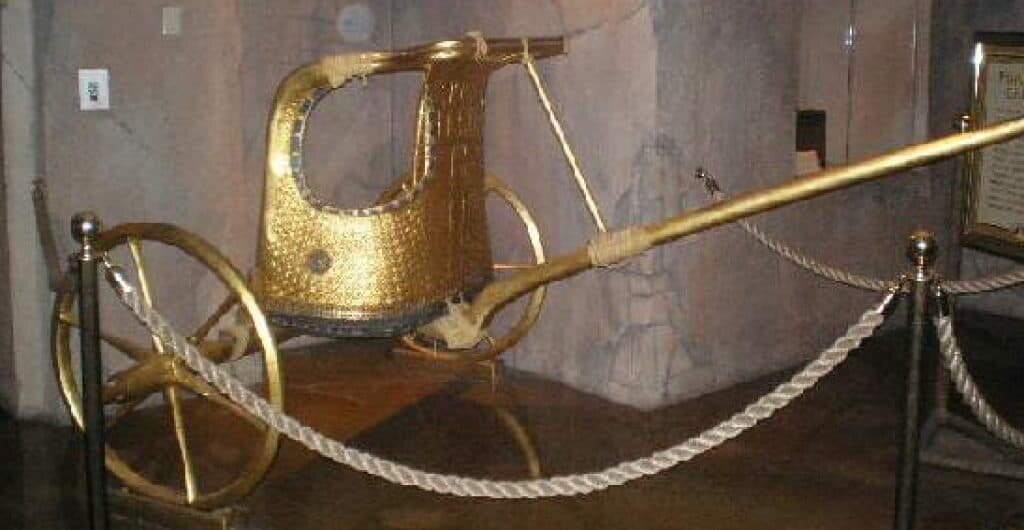 There has come down to us today’s graphic depiction of Tut Ankh Amun’s exploits with the Egyptian chariot. He is seen with an indication of his hunting exploits and it would not be unreasonable to suggest that a young man of 19 would have engaged in chariot racing.

We are fortunate in the fact that five of his chariots were found in his tomb. One of them has been exhibited in America,  Dr. Zahi Hawass tells us that some of the chariots have an indication of a great deal of use based on the condition of the wear on the tires. The point being that the young king did in fact use the chariots frequently.

The accidental death theory is disputed by other medical scientists putting forth the theory that death was caused by complications from malaria and Kohler’s disease, but their theory still leaves much in the way of science to be desired. It can not be taken as seriously as does the majority of evidence pertaining to the leg injury.

Lets turn our attention for a moment to the chariots found in the tomb and in chariot construction in Egypt at the time of Tut Ankh Amun.

It was described as the Formula One Car of its day. Alberto Rovetta, a professor in robotics engineering at Polytechnic of Milan says “These chariots appear to be the first mechanical system which combines the use of kinetics, dynamics and lubrication principles. The wheels feature a real tire, made of a flexible wood rim which adapts to soil irregularities. Moreover, the six-spoke wheels are made from elastic wood. This absorbs uniformly the loads transmitted by soil irregularities so that the vibrations are damped by the wheel itself like the intelligent suspensions in modern cars.”  It appears that every contingency with regard to functionality and indeed safety was well and thoroughly taken into consideration.

Rovetta goes on to say that the result is a remarkable level of softness and comfort. Even at speeds of about 25 miles per hour on Egypt’s irregular soil, King Tut’s chariots were efficient and pleasant to ride. It was said to surpass all monumental structures of the pharaohs in engineering sophistication.

Although one writer said that there is no evidence of chariot racing at the time, common sense will not support this belief. The Egyptians were strong on competition. If you have s group of l9-year-olds riding chariots, there are going to be races. The chariot builders of the day would certainly encourage it.

And so we find a great deal of evidence supporting the superiority of the Egyptian chariot at this time in Egyptian history. The chances of anything breaking down or failing to function properly would be remote. Certainly, there would have been those assigned to keeping the chariots in good working order. We are however being told that the king had an accident of sufficient nature to throw him off at a speed of 25 plus miles an hour sufficient to produce a fatal injury.

Let’s consider the question of sabotage. Who would want him out of the way and why? Again. referring to the work of Dr. Brier, there was one primary character at this time who would well and truly profit from the death or a seriously incapacitated pharaoh.

Although there could have been others who would profit from the death of Tut Ankh Amun, Ay was the one who would profit the most. He would inherit both the crown as well as the young wife of the pharaoh. He had been standing in the wings for the totality of his life. As the primary advisor to the young king, he had virtually total control. If Ay ever wanted to be pharaoh, he had to act soon as he was getting older every day. There has to be a lot of supposition at this juncture, but the reason to believe that it is very possible that he needed to hatch a plan to get rid of Tut Ankh Amun.

Now, back to the chariot. If one wanted to sabotage the chariot, in spit of the marvelous engineering features, it would be relatively easy to do. The wheel is attached to the axel by inserting the pointed end of the axel into the very strong center of the wheel. It is then held in place by a pin constructed of hard wood or metal. When the pin is removed, the wheel will easily come off. If the pin broke during the operation of the chariot, then the wheel would come off very quickly causing an accident. Would the death of the rider be a certainty? Perhaps not, but this would be as good way as any to cause what could be a fatal accident. If this scenario could conceivably be correct, then this would be step one in a nefarious plan. The king was injured and needed the best medical care available. During the eighteenth dynasty, medical practice was very advanced and sophisticated. Injuries of the type experienced were not at all uncommon at the time and the medical science of the day would be able to successfully treat this type of injury.

What would happen if the doctors failed to act properly in a medical sense? Then it is highly likely that the patient would die. Who could be responsible for any or all of this? There was only one person and that was Ay. He had the power to tamper with the chariot and to control the medical treatment. The stakes were high, perhaps the highest ever seen in the entire history of Egypt.

There are other perhaps little things, but important none the less, The final resting place of Tut Ankh Amun was a small tomb built for the use of Ay. The king was dead, what will we do about a tomb. “ No problem,” says Ay. “we can use mine, I won’t be needing it after all”. Some foresight must have been used to anticipate these events. The rapid marriage to the young widow and the intrigue associated with her contact with the Hittite king and the foul play associated with the dispatched young Hittite prince must have been undertaken at the highest levels in Egypt and by this is meant the deviousness of both Ay and Horemheb who would be that much closer to the thrown with the death of Tut Ankh Amun.

A simple chariot accident. –  I don’t think so.  Failure to properly treat a non-fatal leg wound – I don’t think so. There is just too much evidence pointing to the involvement of Ay in the death of Pharaoh Tut Ankh Amen.

Poison the king’s food? Too easy to trace. A chariot accident would be simple to set in motion and difficult to trace with any degree of certainty. Perhaps a long shot, perhaps not. It was tried and it worked. The king was dead and Ay was now pharaoh. He died after only a few years and Horemheb became pharaoh setting in motion the decline of the great Egyptian empire.

The Shell Grotto of Margate is a Complete...