Over the centuries, the Shroud of Turin has been the subject of fierce debate. The principal question is if its burial cloth of Jesus of Nazareth whose resurrection caused the image to become imprinted on the material. Much less known, but still quite puzzling, is a related and smaller piece of cloth known as the Sudarium of Oviedo.

Was This Cloth Wrapped Around the Head of Jesus?

Some contend that this fabric was the piece of cloth that was wrapped around Jesus’ head as he lay in the tomb (or while he was dead on the cross). There is actually a biblical basis for this belief. In chapter 20 of the Gospel of John, it explicitly says that there was a cloth, separate from the burial shroud, used to wrap around Jesus’ head.

The Sudarium of Oviedo

Background on the Sudarium of Oviedo

As with the Shroud, the Sudarium of Oviedo has a colorful history and has its believers and its skeptics. The first mention of its existence occurred in 570 CE. The enigmatic sixth-century pilgrim Antoninus of Piacenza claimed the cloth was housed in a monastery near Jerusalem.

Related: The Face on the Shroud of Turin

Jerusalem was apparently not a safe place for the relic. It was subsequently taken from that city in the 610s just ahead of the invading Persian armies. It arrived in Spain by way of Northern Africa and eventually found permanent housing in the northern Spanish town of Oviedo.

Unlike the Shroud, there is no “photographic image” of a human head on the cloth. But some believers state the bloodstains on the Sudarium match up to apparent wounds on the head of the image on the Shroud. 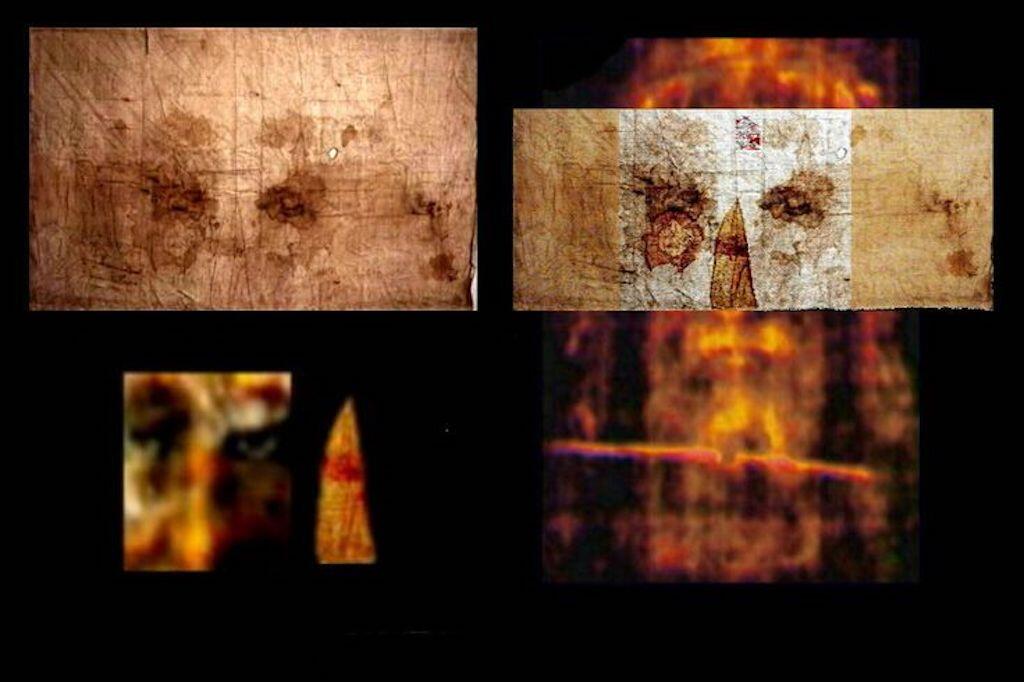 How the Sudarium fits perfectly with the Shroud of Turin. Image: Men of Value.

Using a method called Polarized Image Overlay Technique, scientists have matched more than 100 bloodstain locations on the Sudarium with identical bloodstain sources on the Shroud. It is also purported that the position of the stains on the cloth shows the person died in an upright position.

The all-important carbon-dating test estimated the Sudarium to be from the 7th century. However, immediately after this result, the scientist who performed the tests called them imprecise. He stated a definitive dating requires further testing.

The investigation team of the Spanish Centre for Sindonology conducted an intensive study. They concluded the staining on the Sudarium was made in several different body positions. They created artificial heads in an attempt to replicate the stains on the cloth.

Their study also found small pointed bloodstains on the section that would have been on the back of the head. Believers contend these are from the crown of thorns. Another scientist examined the pollen attached to the Sudarium and found examples from Palestine, North Africa, and Spain. But none from European countries.

Shadowed by the Shroud of Turin

Interest in the Sudarium as a possible relic and scientific object of study is gaining momentum. But it is doubtful it will ever equal the interest of the Shroud. There was a conference on the Sudarium in 1994. A second conference occurred between 13-15 April 2007. The Ark containing the Sudarium of Oviedo.

In the meantime, pilgrims and the curious can visit the Oviedo’s Cathedral of San Salvador. The ark containing the Sudarium is displayed year-round and the cloth is shown three times a year.

Search for the Third Buddha of Bamiyan