The Voynich Manuscript is a mysterious manual from the 15th century in Central Europe. It contains text in an unknown language and bright illustrations of women, plants, and astronomy. The first known owner of the manuscript is Holy Roman Emperor Rudolf II of Bohemia (r. 1576-1612). Since 1969, Yale University’s Beinecke Rare Book Library has possessed the artifact, from which researchers across the world continue to study its puzzling content.

The Voynich Manuscript is a mysterious manual containing an undeciphered text and illustrations on plants, women’s health, and astronomy. Public domain.

Of the original 272 original calfskin vellum pages, about 240 still exist. In total, the book consists of 14 or 15 whole calfskins. Although the cover is goatskin, it is not original. A number of its sheets are foldouts, making this a very unusual book from this time period. Its dimensions are seven inches by ten inches.

Radiocarbon dating of the vellum indicates an origin from 1404-1438. Most experts agree that it is European in origin, but they cannot agree on the specific region. There are no other examples of the language contained within the text and the author is still a mystery.

What Is in the Voynich Manuscript?

According to the Beineke Rare Book and Manuscript Library, there are six sections in the manuscript.

History of the Voynich Manuscript

After the Holy Roman Emperor, the next owner of the manuscript was Jacobus Horcicky de Tepenec. He was Emperor Rudolf’s Imperial Distiller, doctor, and director of his botanical gardens. Tepenec penned his signature onto the first page of the text sometime after 1608. By 1637 the book lay in the hands of an alchemist by the name of Georges Barschius. When Barschius died in 1662 the book found its way to the Jesuit Roman College or Collegio Romano where it probably remained for the next 200 years. (Cummings). 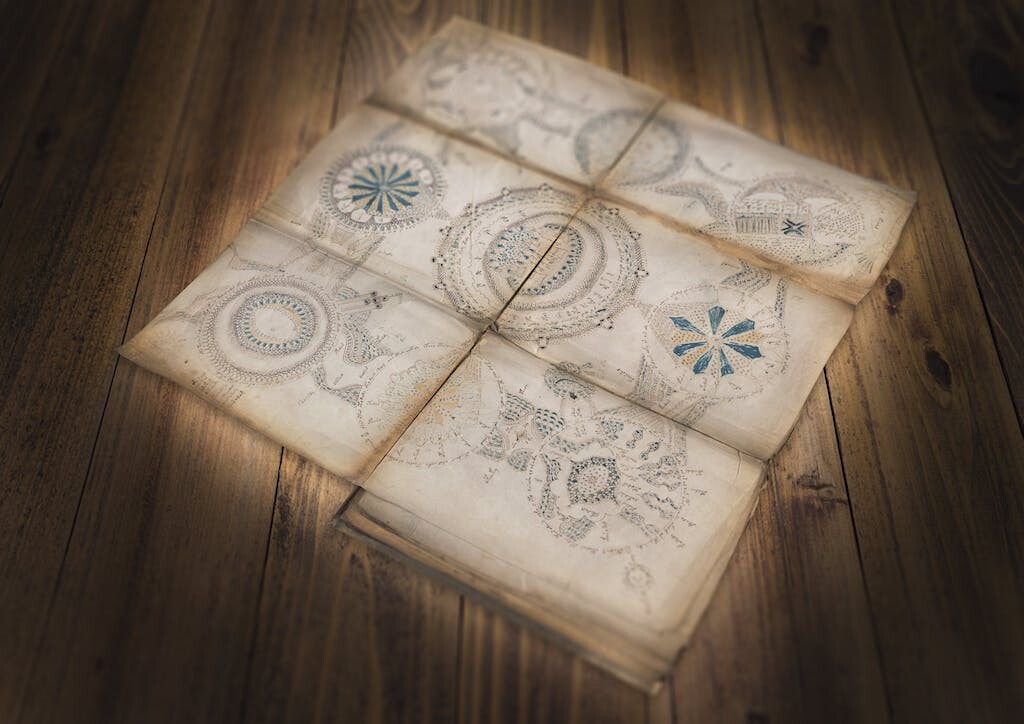 The manuscript takes the name of the American rare book dealer, Wilfrid M. Voynich, who purchased the mysterious text in a bundle of other books from the Jesuit college in 1912. After he died in 1930 the book stayed with Voynich’s wife, who left it to their secretary, Anne Nill. Anne sold it to a famous book dealer for $24,500, who, in turn, donated it to the Yale Beinecke Library in 1969, where it remains today.

Illustrations in the Manual

Illustrations in the Voynich Manuscript are as mysterious as the language of the text. Many of them are botanical. However, modern science has not documented some of the plants depicted in the book. Other drawings are related to astronomy and women’s health. Although the pictures appear to contain captions, they, too, are indecipherable. 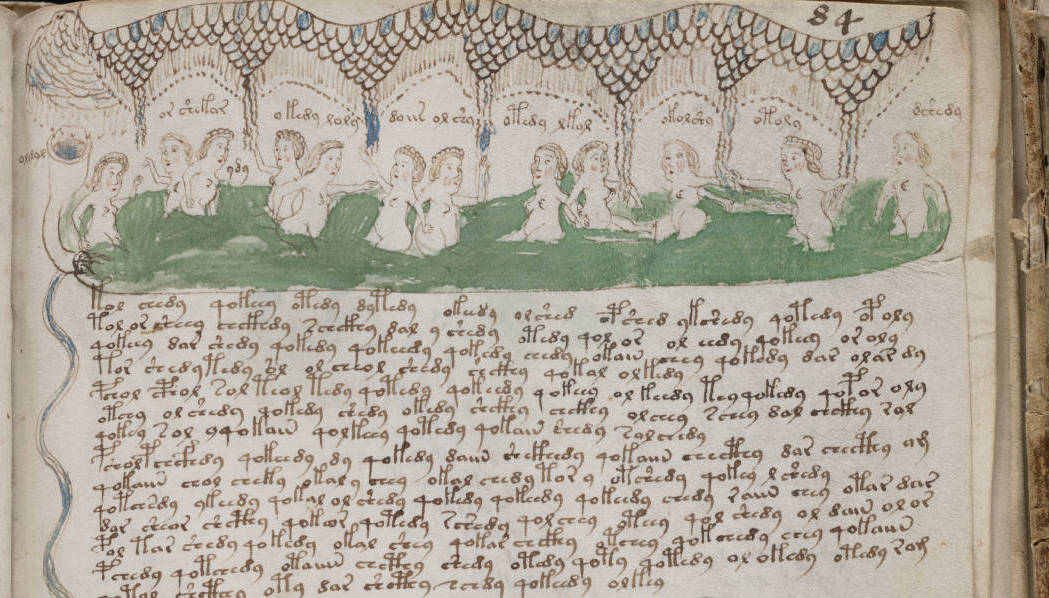 Illustrations of women suggest the Voynich Manuscript may be a text on women’s health. Public domain. 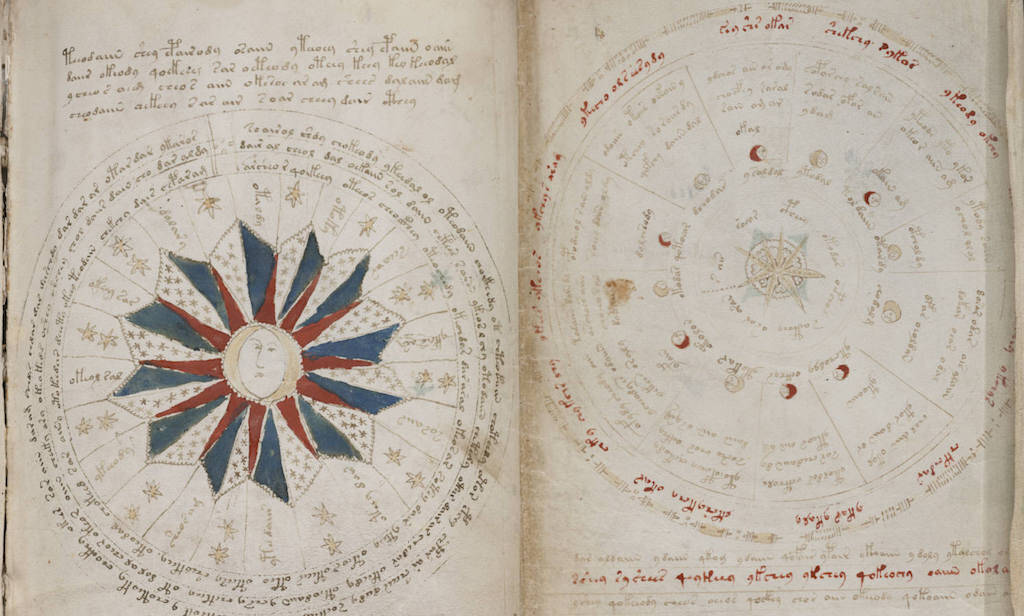 What is the Language in the Textbook?

No one has been able to translate the Voynich Manuscript. Experts disagree as to whether it is a language or a cipher, a secret code designed to hide meanings. There seem to be patterns within an alphabetic system, possibly containing between 19 and 28 characters. However, because the text is unique and indecipherable, some scholars believe that the author or authors may have created a hidden code, which was not uncommon amongst secret societies of the time.

Secret languages and codes [were] utilized throughout history by secret societies, marginalized groups and even cults. Sometimes their motives were noble, and in other cases, more sinister machinations were at play. 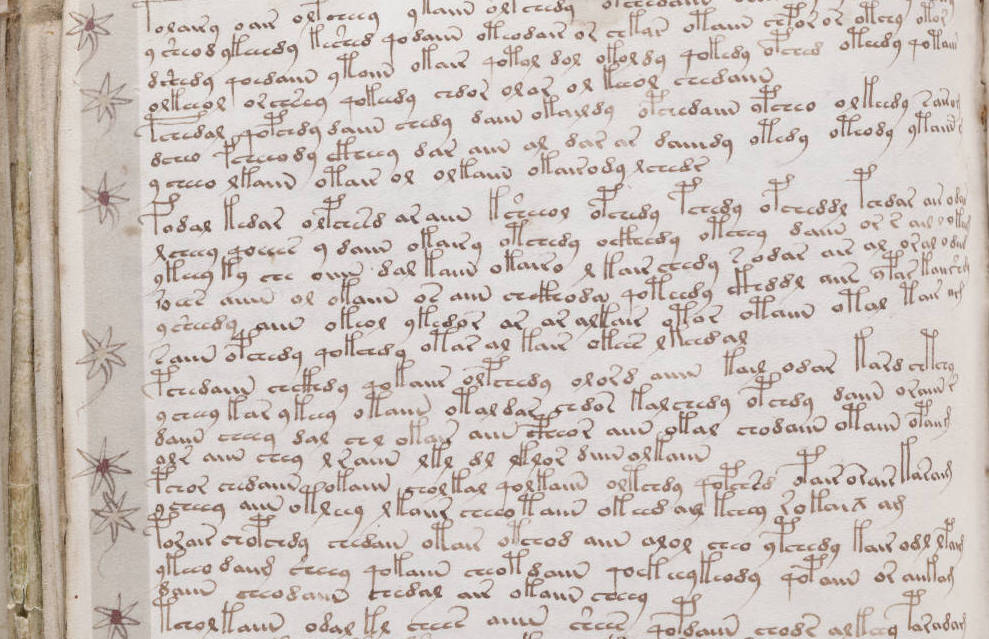 Is this text a language, a cipher, or a nonsensical fabrication? Public domain.

Despite the lack of a title, most experts suggest that the Voynich Manuscript is a scientific textbook of botany, biology, astronomy, and medicine, according to the illustrations and layout of the manual.

Who Wrote the Voynich Manuscript?

Amongst the earliest evidence of the Voynich Manuscript is a letter addressed to Holy Roman Emperor Rudolf II that mentioned Roger Bacon as its author. Unfortunately, whoever wrote the letter was only guessing at the author of the manuscript. Roger Bacon was a scholar and a Franciscan friar. There is no concrete evidence that Roger Bacon was responsible.

Because the text appears indecipherable, some people believe the book may be a hoax. The idea is that someone wanted to pawn it off as a curiosity to Emperor Rudolph, who paid 600 gold ducats for the curious manual.

“It is very likely that Emperor Rudolph acquired the manuscript from the English astrologer John Dee (1527-1608) whose foliation remains in the upper right corner of each leaf” (Shailor). John Dee possessed a number of manuscripts that Roger Bacon wrote, and Dee’s son commented that his father had spent much time on a book that contained nothing but “Hieroglyphicks [sic],” while he was in Bohemia. This may suggest that John Dee did not write the manual himself. However, where Dee may have acquired the book is uncertain.

A woman named Edith Sherwood put forth another theory. Edith has theorized that young Leonardo DaVinci wrote and illustrated the manual. While this is an intriguing theory, there is no evidence of this.

Although there are few answers about the Voynich Manuscript, research is ongoing. Some top experts have dedicated much time to attempt to decipher the code. Of course, there have been those who have claimed to have succeeded. However, all such claims are unsubstantiated. For now, we will have to leave the answers up to our imaginations and hope that it does not turn out to be a cookbook full of terrible recipes.